The federal government is the largest single energy user in the United States — with about half of that coming from the military. But it still produces only a tiny fraction of overall US greenhouse-gas pollution, roughly 0.6 percent.

Put it this way: the White House says the promised cuts by federal agencies (combined with cuts by federal suppliers like GE and Honeywell) will save 26 million metric tons of carbon dioxide over the next decade. That's not nothing — it's the equivalent of taking 5.5 million cars off the road for a year.

The federal government is responsible for just 0.6% of US emissions

But that reduction only comes to about 0.4 percent of the carbon dioxide that the United States emitted in 2013, a single year. So in the grand scheme of things, this step is a pittance.

Instead, the real significance might be the ripple effects this move has on the broader supply chain. After all, the federal government is a huge purchaser of energy goods and services. It owns more than 360,000 buildings and 650,000 fleet vehicles, according to the Washington Post. So if federal agencies are buying up more wind or solar or hybrid vehicles, that boosts the market for these technologies.

Federal agencies have already been taking steps to cut emissions, thanks to an earlier order by Obama back in 2010. As of 2013, emissions from the federal government were 17.2 percent below 2008 levels. The Navy, for instance, has been planning solar and renewable projects at the Joint Base Pearl Harbor–Hickam in Pearl Harbor, Hawaii, the Marine Corps Base Hawaii in Kaneohe, Hawaii, and Camp Smith in Aiea, Hawaii.

The new order will target buildings, vehicles, and electricity

The new executive order will build on previous steps. More specifically, Obama will call on federal buildings to reduce their energy use by 2.5 percent each year between 2015 and 2025. That could involve steps like installing better insulation, or using more energy-efficient lighting.

Federal agencies will also have to get one-quarter of their energy from carbon-free sources — wind or solar or nuclear or whatnot — by 2025.

And agencies will have to boost the fuel-economy of the cars, trucks, and other vehicles in their fleet by 30 percent over the next decade.

But EPA rules are the real centerpiece of Obama's climate plan 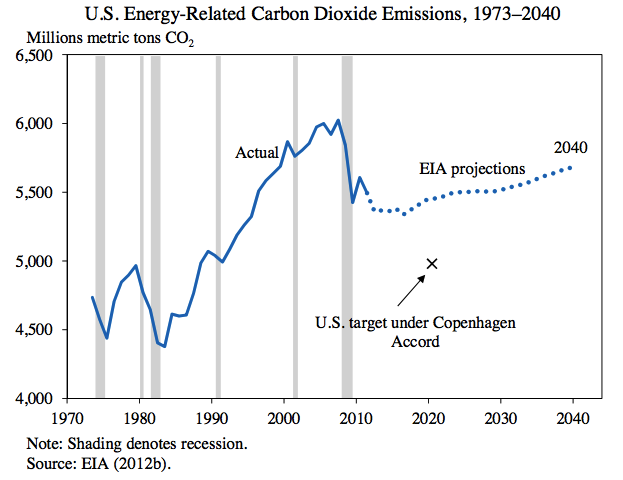 (Economic Report of the President, 2013)

That's a much, much bigger, much harder task — the major steps that Obama has taken so far include strict new fuel-economy standards for cars and trucks, proposed EPA rules on carbon emissions from coal plants, and a crackdown on methane leaks from oil and gas drilling.

This newest move to reduce emissions from federal agencies is a step in that direction, but a very tiny one compared to some of the others.