A map of all the underwater cables that connect the internet

Share All sharing options for: A map of all the underwater cables that connect the internet

Cables lying on the seafloor bring the internet to the world. They transmit 99 percent of international data, make transoceanic communication possible in an instant, and serve as a loose proxy for the international trade that connects advanced economies.

Their importance and proliferation inspired Telegeography to make this vintage-inspired map of the cables that connect the internet. It depicts the 299 cables that are active, under construction, or will be funded by the end of this year.

In addition to seeing the cables, you'll find information about "latency" at the bottom of the map (how long it takes for information to transmit) and "lit capacity" in the corners (which shows how much traffic a system can send, usually measured in terabytes). You can browse a full zoomable version here.

The cables are so widely used, as opposed to satellite transmission, because they're so reliable and fast: with high speeds and backup routes available, they rarely fail. And that means they've become a key part of the global economy and the way the world connects.

Take, for example, the below map, which lets you slide between a 1912 map of trade routes and Telegeography's map of submarine cables today. The economic interdependence has remained, but the methods and meaning have changed: 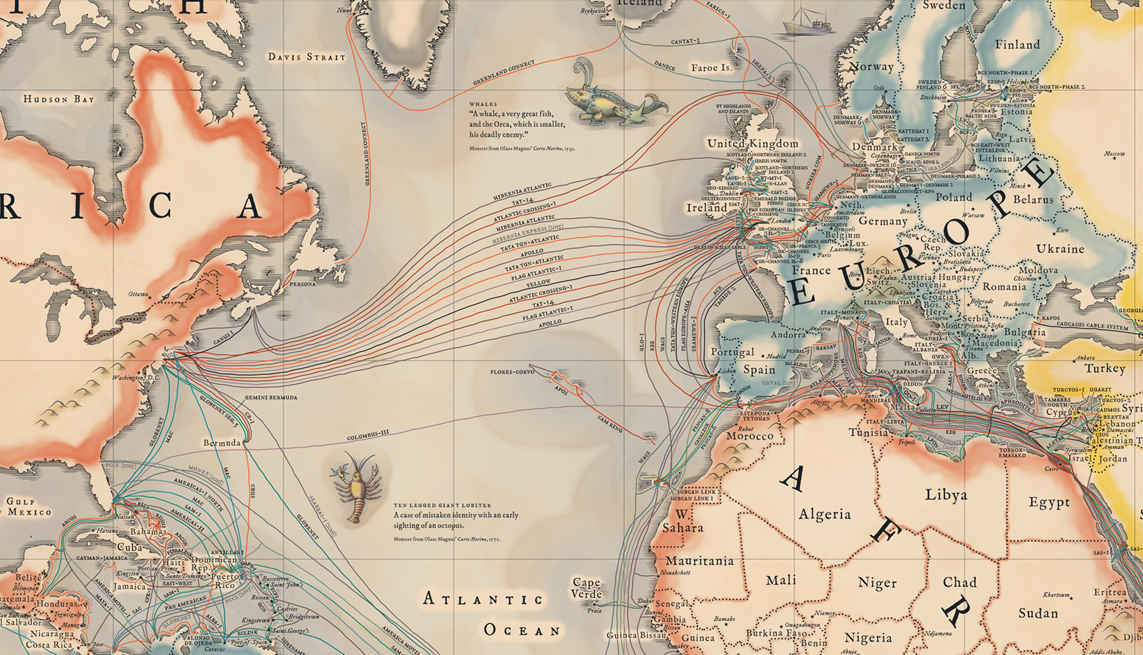 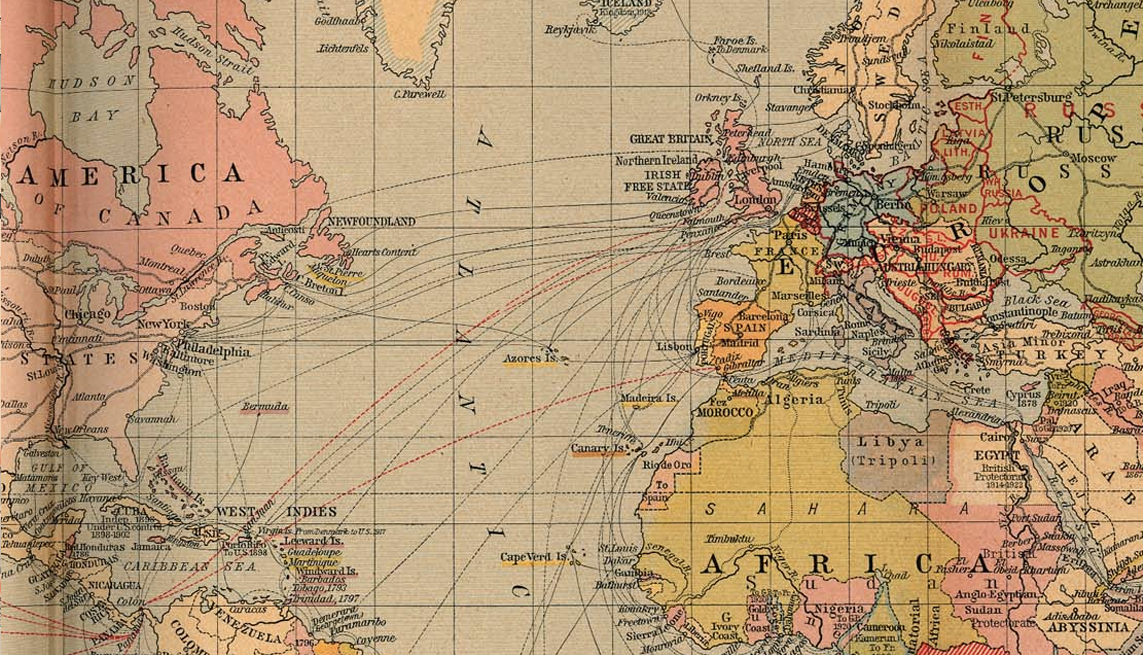 The submarine cable map shows economic connections in less-developed countries as well. Cables between South America and Africa, for example, are much more scarce than trans-Atlantic and trans-Pacific routes:

Connections in the South Atlantic are scarce. (Telegeography)

Though cables to developing countries are expanding, they have a lot of work to do before they catch up. And Antarctica is left out completely (scientists down there get their internet from satellites).

The analogy between submarine cables and historic trade routes has a lot of caveats: trade routes were determined by geography as well as economic interests, and economic incentives were a lot different then than they are today. It would also be a mistake to overlook physical goods in favor of the internet (just look at those giant container ships). But both then and now, paths across the ocean require investment, trading partners on both sides, and a willingness to take risks. Sailors took the gamble in the past, and tech companies are taking it now.

These cables carry information for the entire internet, including both corporate and consumer interests. That's why Google invested $300 million in a trans-Pacific cable system consortium to move data, Facebook put money into an Asian cable system consortium, and the finance industry invests just as much to shave a few milliseconds off trade times.

Other consortia regularly lay cables to transmit the consumer internet. Each group's control of a submarine cable is an advantage in the information exchange between countries.

Submarine cables are a 150-year-old idea with new potency

The process for laying submarine cables hasn't changed much in 150 years — a ship traverses the ocean, slowly unspooling cable that sinks to the ocean floor. The SS Great Eastern laid the first continually successful trans-Atlantic cable in 1866, which was used to transmit telegraphs. Later cables (starting in 1956) carried telephone signals.

A map of the submarine telegraph in 1858, though the attempt only worked for three weeks. (Wikimedia Commons)

Modern cables are surprisingly thin, considering how long they are and how deep they sink. Each is usually about 3 inches across. They're actually thicker in more shallow areas, where they're often buried to protect against contact with fishing boats, marine beds, or other objects. At the deepest point in the Japan Trench, cables are submerged under water 8,000 meters deep — which means submarine cables can go as deep as Mount Everest is high.

The optical fibers that actually carry the information are bundled within the larger shell of the cable:

A diagram of a submarine cable. (Wikimedia Commons)

These cables move the videos, trades, gifs, and articles that bring the internet around the world in a matter of milliseconds. And that's the type of advantage any trader — digital or analog — could appreciate.