How Americans think the world will end, in charts

Share All sharing options for: How Americans think the world will end, in charts

Americans have varying ideas on how the world will end, from nuclear war to a direct act of God to zombies.

About two-thirds of Americans told online pollster YouGov that they have given little or no thought to preparing for the apocalypse. But when asked to elaborate on the most likely end-of-the-world scenario, Americans showed off their partisan differences — and some similarities.

David Mendoza at the Mendoza Line charted the YouGov survey's findings on how people think the world will end: 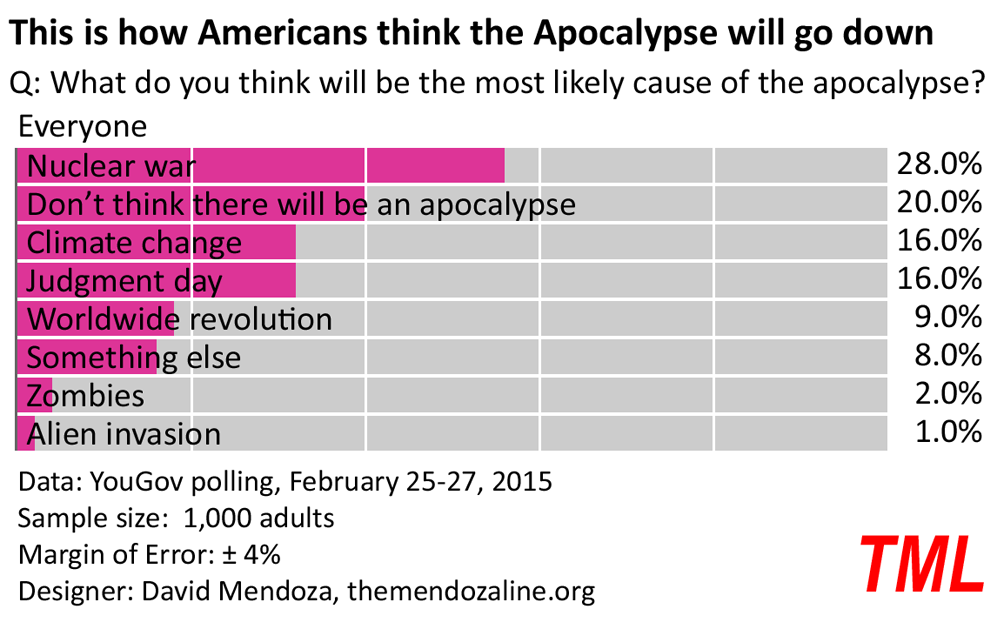 The most popular response was nuclear war, although quite a few people said — in a scientifically dubious claim — that the world won't end at all. 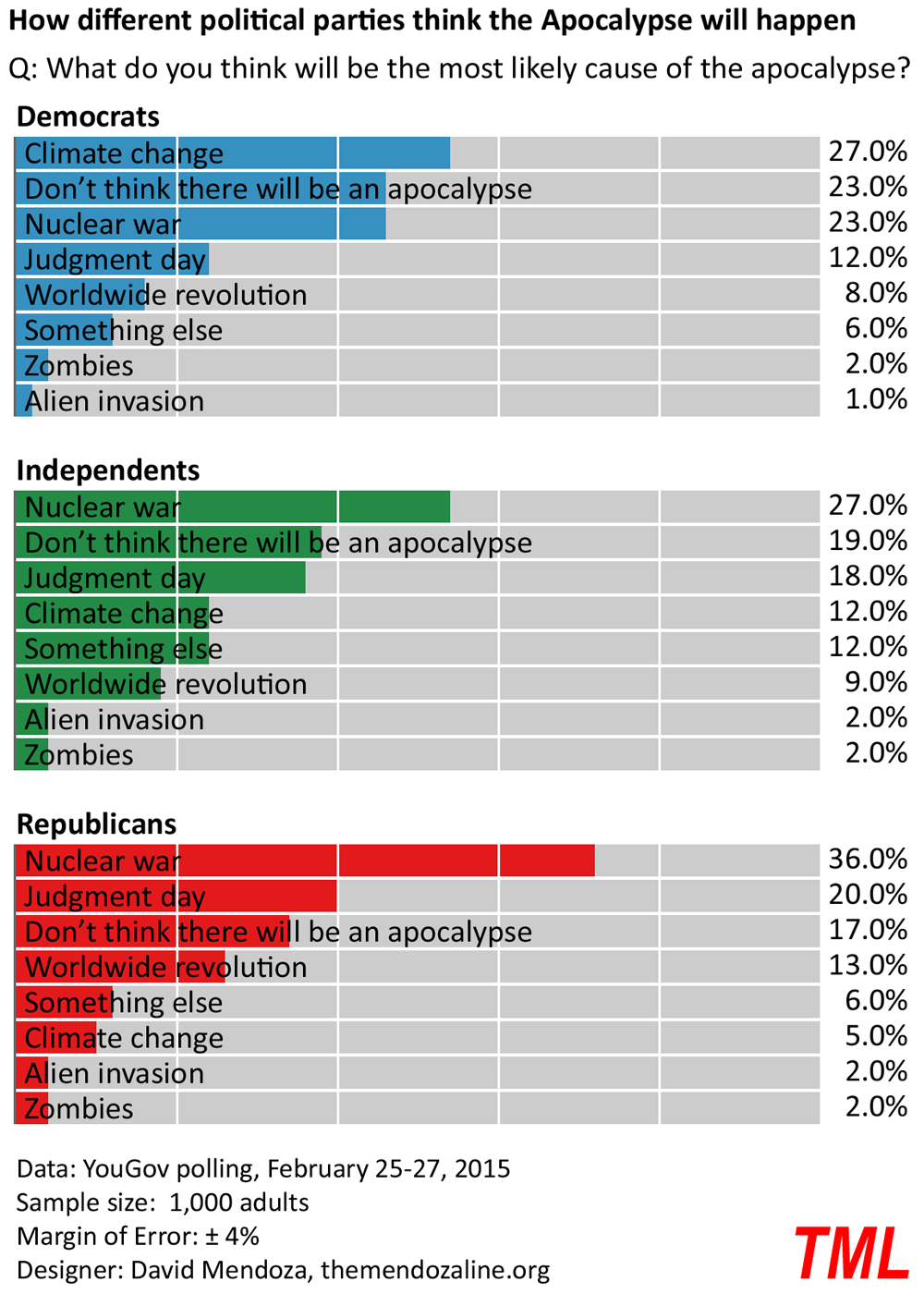 Republicans, as a group, said nuclear war and Judgment Day will be the most likely causes of the apocalypse. Democrats cited climate change, although they were more confident than Republicans that there won't be an apocalypse at all. 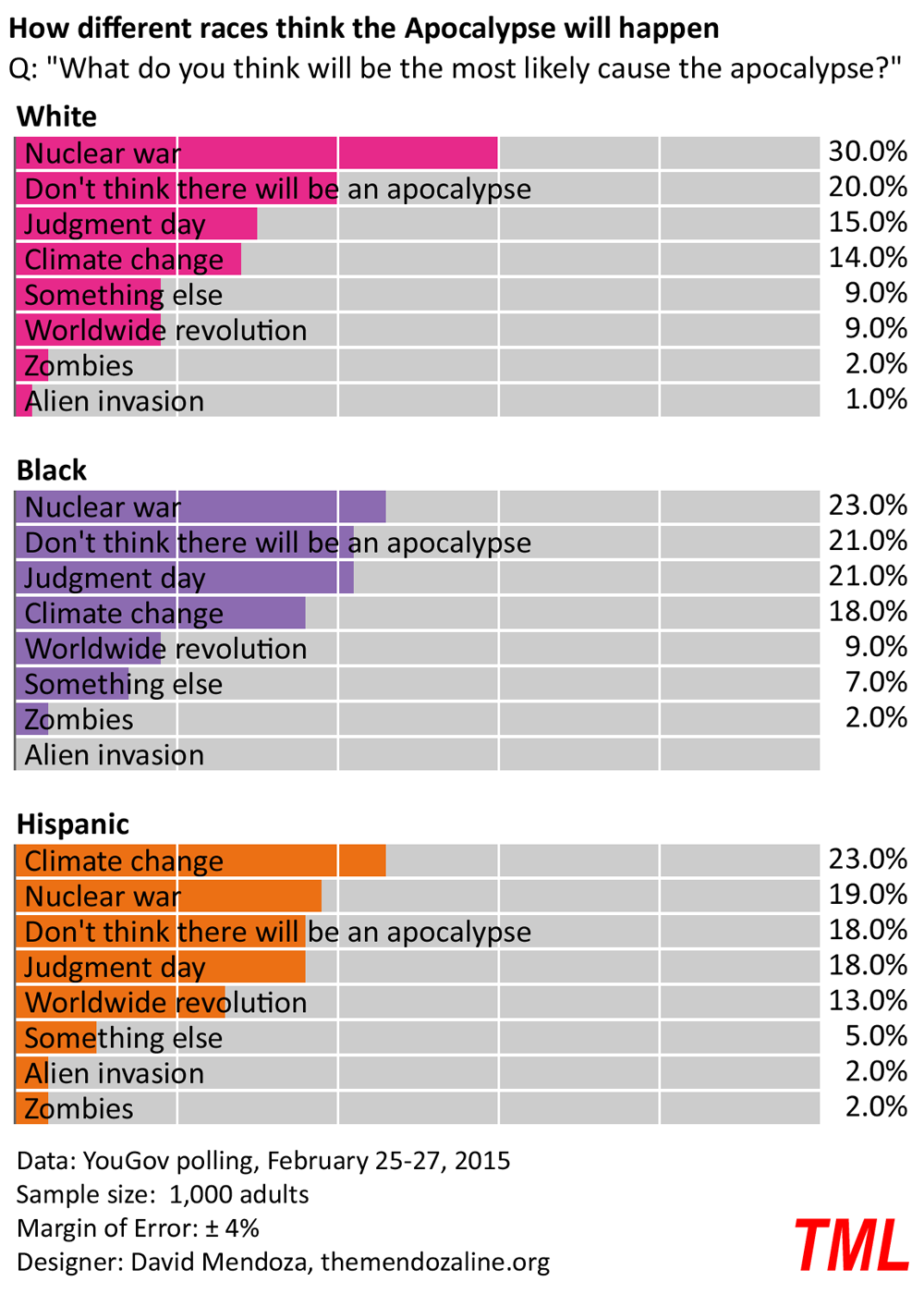 Uniquely, Hispanic Americans' top apocalyptic concern was climate change. This somewhat matches the findings of a 2014 Pew Research Center survey, in which Hispanic respondents were a lot more likely than their black and white counterparts to acknowledge global warming is real and to say it's caused by human activity.

One concern that's remarkably consistent among all these groups: zombies. About 2 percent, regardless of how the results were broken down, voiced concerns about zombies destroying the world.

Really, there's no need to worry about zombies. As David Dietle at Cracked explained, the undead likely wouldn't be able to handle natural predators, heat, cold, day-to-day damage from trying to eat everyone, natural barriers that would limit their movement, and, you know, guns. These hurdles would likely limit a zombie outbreak so it's never much of a threat to humankind.

But anyone who's truly concerned about the zombie apocalypse can ease his or her concerns with a real zombie simulator, which shows that finding refuge in a rural area could guarantee survival.

Further reading: These are the 12 things most likely to destroy the world.