Why ISIS is destroying Syrian and Iraqi heritage sites

Share All sharing options for: Why ISIS is destroying Syrian and Iraqi heritage sites

Wednesday morning, ISIS militants beheaded Khaled al-Asaad, a renowned scholar of the ancient world in his early 80s, and hung him from a Roman column in the ruins of Palmyra in Syria. Al-Asaad was no threat: He dedicated his life to studying the antiquities at Palmyra, a UNESCO World Heritage Site filled with irreplaceable historical treasures such as 2,000-year-old Roman buildings and magnificent pre-Islamic statues. When ISIS conquered Palmyra in May, al-Asaad refused to flee, staying behind to try to protect the site from ISIS plunder. Reportedly, he died after ISIS interrogated him, hoping to get him to reveal the location of some of Palmyra's hidden valuables. For a scholar like al-Asaad, protecting those secrets is a cause worth dying for: ISIS has been destroying priceless historical artifacts around Iraq and Syria. Their ideology demands it.

To understand why ISIS is doing this, you need to understand the group's intellectual history. ISIS's hostility toward historical artifacts is shared by other militant Sunni Islamist groups, dating back at least to the 18th-century religious revival that led to the birth of modern Saudi Arabia. More recently, Islamists' work has seen treasures destroyed from Afghanistan to Somalia. But ISIS has upped the game well beyond any of its modern peers, damaging and destroying priceless antiquities by the thousands.

Here's what you need to know to understand this "cultural cleansing" — explained through photographs and videos of 11 historic artifacts and sites lost to the world at the hands of Islamist groups. 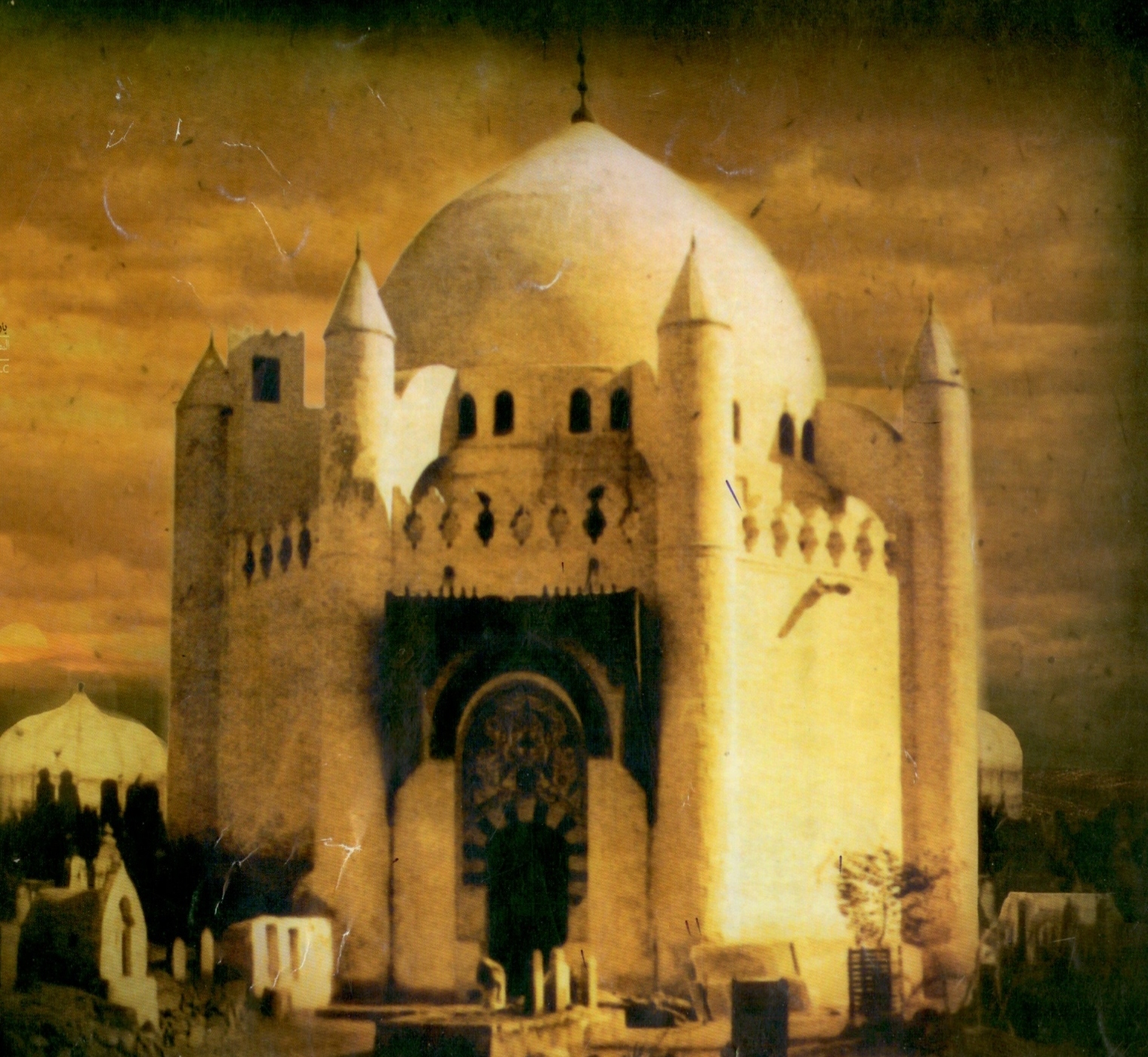 Saudi authorities destroyed this mausoleum, part of the al-Baqi cemetery in Medina, in early 1926, shortly after taking power in the city in the prior year. In fact, they flattened the entire site, which dated back to the seventh century and is thought to have contained the bodies of some of the prophet Mohammed's early compatriots.

The act "shocked the international Muslim community," Dr. James Noyes, author of The Politics of Iconoclasm, told me.

The Saudis didn't just do this on a whim. They were, and still are, aligned with a religious faction called the Wahhabis — a group of Sunni fundamentalists who, like some Christian denominations, reject any form of worship through religious shrines and icons.

"The attacks on shrines and tombs are a rejection of 'shirk' (the worship of God through shrines)," Noyes explained.

Theologically, Wahhabis and other Islamists trace this back to the story of the golden calf that appears in the Koran and the Bible, in which the Israelites build and pray to an idol, sparking God’s fury. A number of Muslims see the story as a blanket prohibition against the worship of images and shrines altogether.

As the Wahhabis and Saudis consolidated control over what's now Saudi Arabia, they destroyed anything that even hinted at idol worship. "The Arabian peninsula used to have Jewish communities, pagan pre-Islamic tribes, shrines favoured by Shiite and Sufi pilgrims on the Hajj to Mecca and Medina, Ottoman and Egyptian influences, and the Hashemite kingdom," Noyes wrote via email. "All of that is gone." 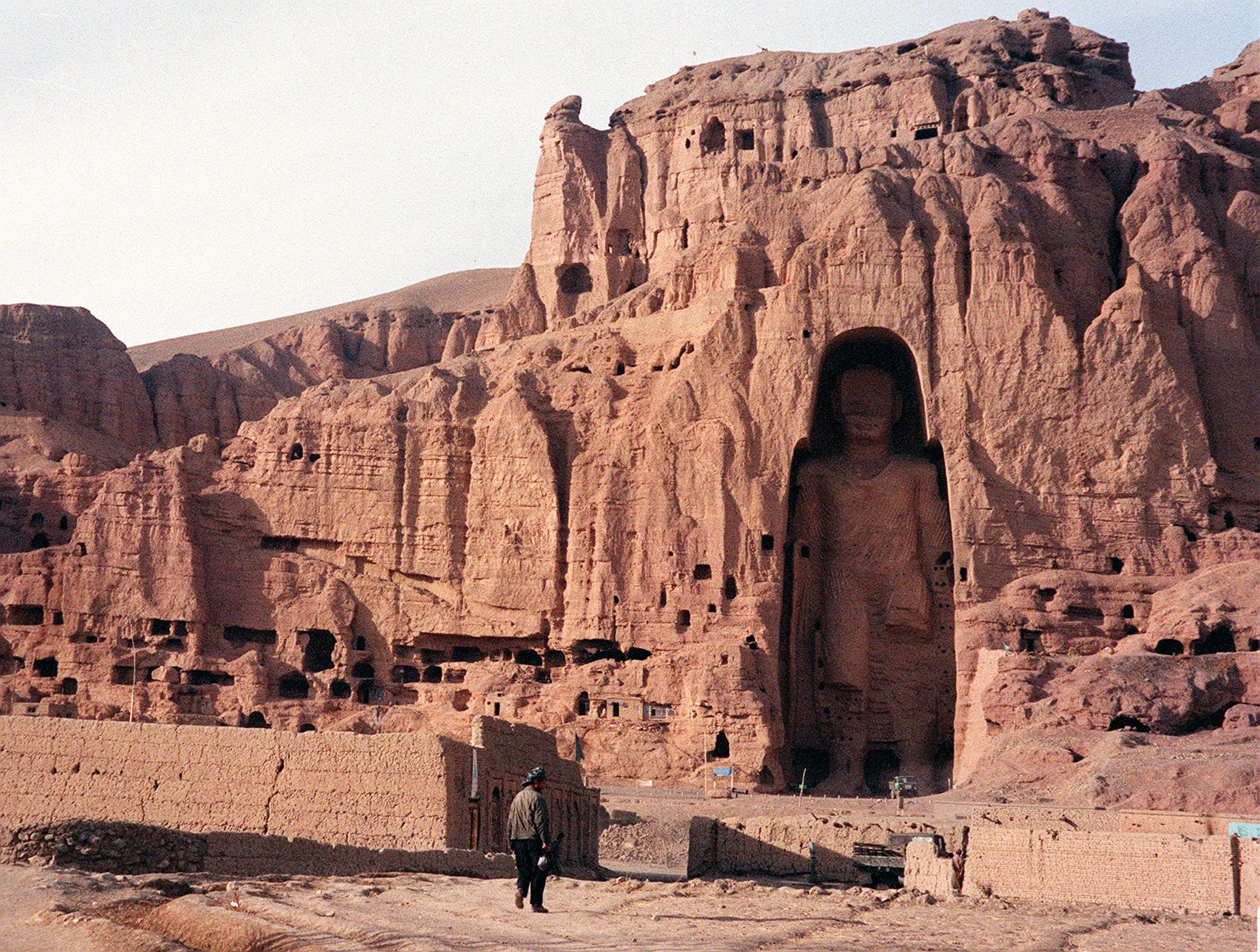 The Wahhabis' views on icon worship continue to influence Sunni militant groups around the Muslim world today. In 2001, the Taliban blew up two 1,700-year-old statues of Buddha carved into a cliff in central Afghanistan's Bamiyan valley, sparking a huge international outcry. They were the tallest statues of Buddha in the world, one standing about 165 high. The UN cultural body Unesco has led plans to rebuild the towering figures, but the work has been bogged down in 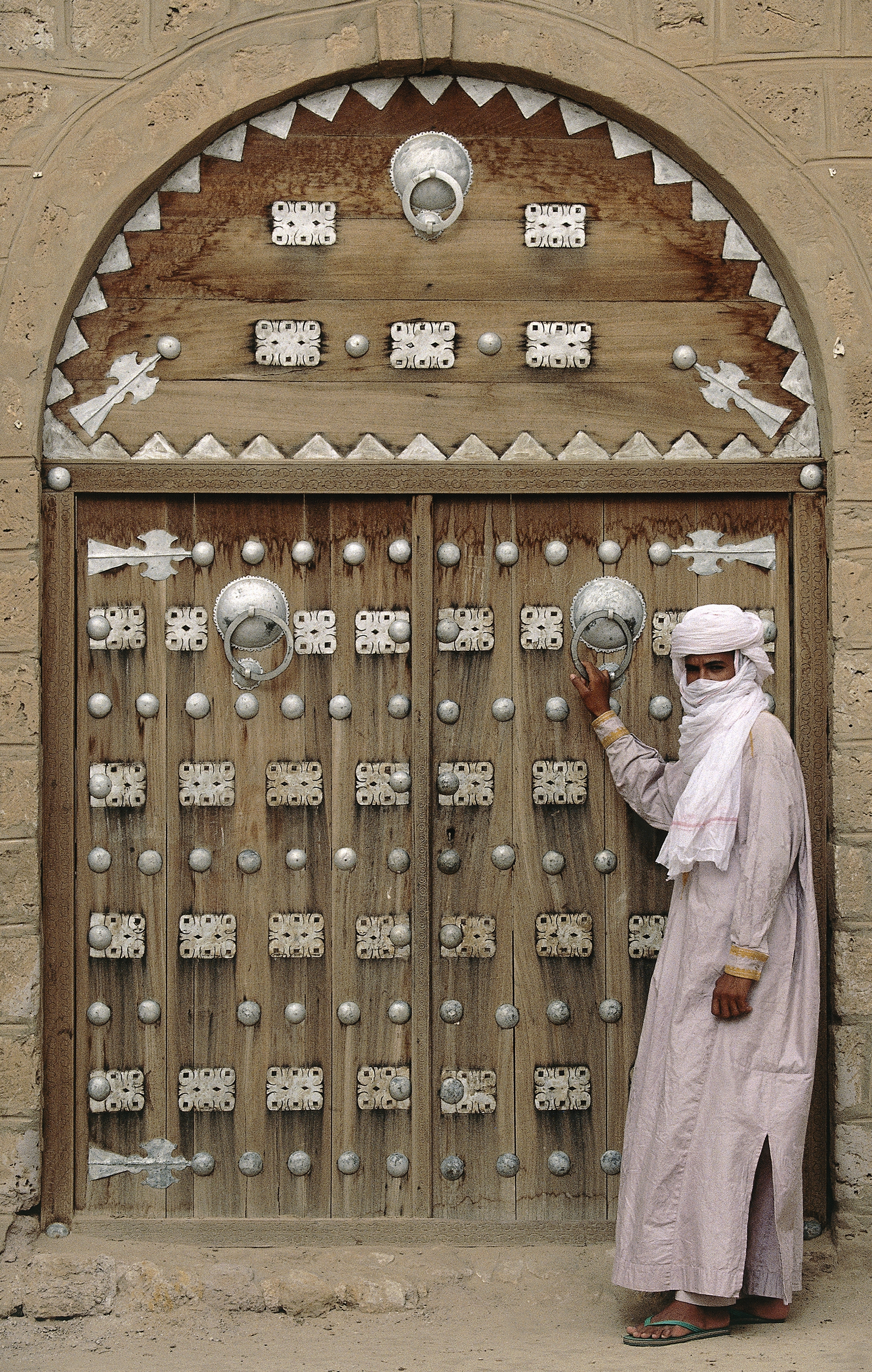 Actual governments run along Islamist lines, like in Saudi Arabia and in Afghanistan under the Taliban during the late 1990s, are relatively rare. But the rise of Islamist groups in chaotic conflicts has become more common. And when these groups storm cities and towns with historical treasure troves, the results often aren't pretty.

In 2012, Islamists from al-Qaeda and Ansar Dine overran the ancient city of Timbuktu in Mali, a UN World Heritage Site. This picture shows the ornate front door of Timbuktu's Sidi Yahya mosque. Legend had it that the door would stay shut until the apocalypse; the Islamists smashed it. At least half of the roughly 600-year-old shrines in the city were destroyed before an international force pushed the militants out.

That's actual video of the Somali group al-Shabaab destroying Sufi (mystical Islamist) graves and shrines in Kismayo, Somalia's third-largest city, in 2008. Previously, the group had destroyed an old church — it did not seem to matter that not a single Christian lived in the city at the time. 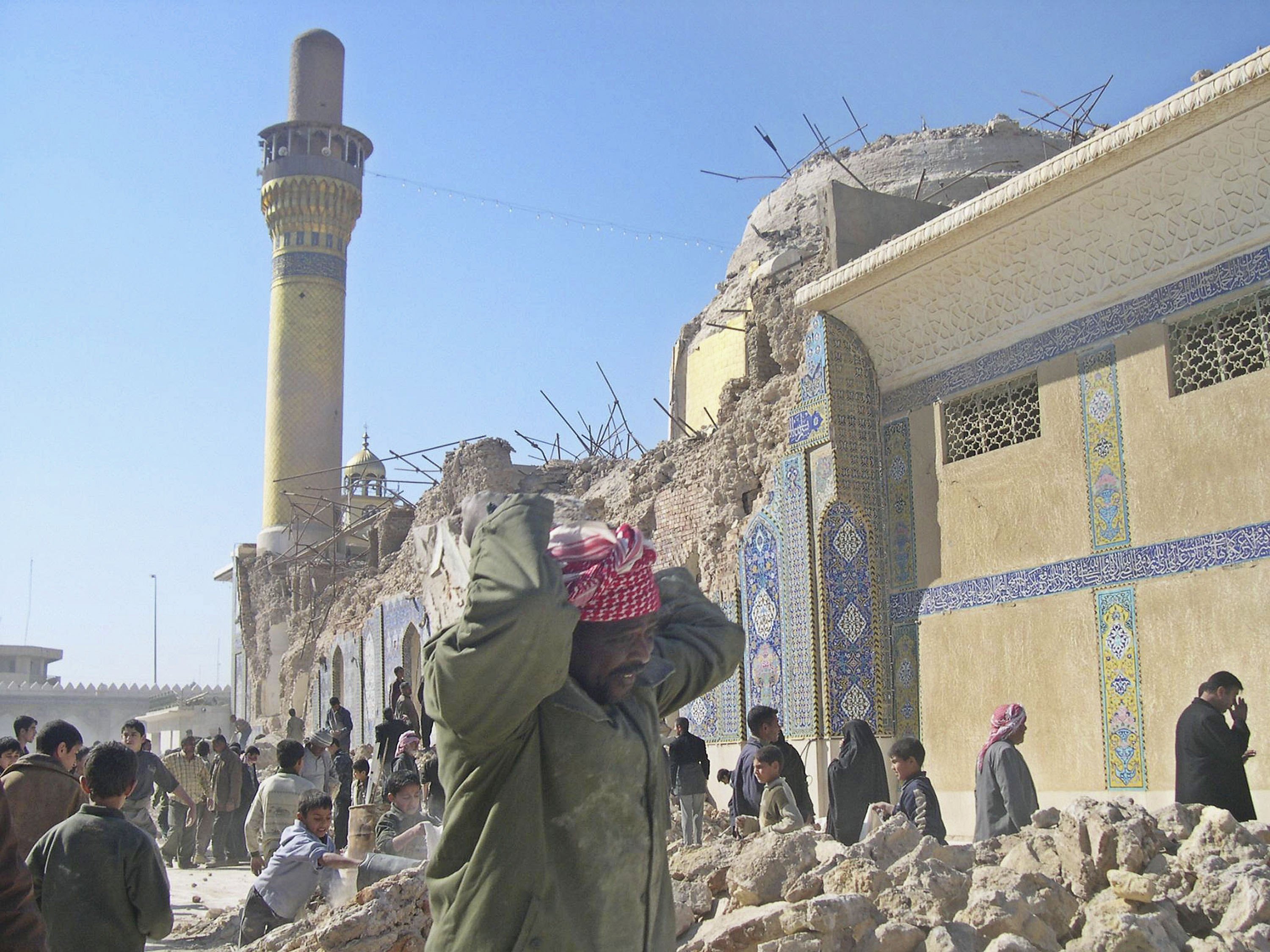 The motivation of this kind of destruction is not always purely theological: sometimes it can serve more mundane political aims. In 2006, the height of the Iraqi civil war, al-Qaeda in Iraq bombed the al-Askari mosque, one of the world's holiest Shia shrines, built in the city of Samarra in the year 944. The mosque's iconic golden dome was reduced to rubble in an attempt by a Sunni militant group to further inflame Iraq's sectarian war. Al-Qaeda in Iraq, of course, would later evolve into ISIS — and the al-Askari mosque bombing, in many ways, presages the ISIS rampage that would follow it.

6) 2014: ISIS blows up the ancient Assyrian church of Tikrit

There are two reasons why ISIS's assault against history is so much more devastating than what's come before it. First, ISIS controls a huge amount of territory (a little larger than the UK), so it has a lot of land in which to wage its campaign of cultural vandalism. Second, the territory it controls is chock-full of historic religious shrines sacred to all peoples — like the Assyrian Green Church in Tikrit, originally built in the year 700. In September, reports emerged that ISIS had blown up the church.

"The sheer volume of overlapping sites of ancient and scriptural importance is unique to Syria and Iraq," Noyes told me. "So, too, is the sheer volume of overlapping religious expressions of faith. For absolutist Sunnis, it makes this area the prime target, with plenty of things to target: hundreds [sic], thousands of shrines, tombs, statues, buildings, from dozens of different cultures and eras.

"Syria and Iraq are the jackpot."

ISIS's iconoclasm goes hand in hand with its attempt to construct an Islamic state. The so-called "purification" of its territory is a means of asserting its control over the local population and sending a message that this territory will, from now on, be governed along Islamic lines. "As ISIS fights to define the frontiers of its so-called caliphate," Noyes writes, "iconoclasm represents a means of bridging the principles of theological and political unity."

That explains why you see so many videos like this one, which reportedly shows ISIS detonating the tomb of the biblical prophet Jonah (or Yunus) in Mosul, Iraq. The video, along with this one showing ISIS fighters defacing the tomb before its demolition, serves as a means of asserting its control over the territory it has seized. 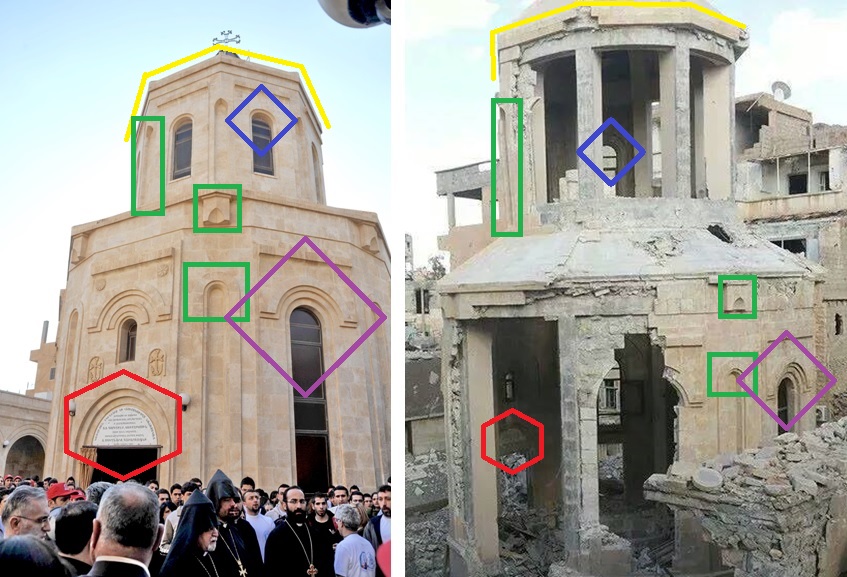 This is the Armenian Genocide Memorial Church in Deir ez-Zor, Syria. At Hyperallergic, Sam Hardy did a really nice job annotating the damage to the church, believed to be the result of ISIS defacement. This image drives home the permanence of the defacement of historical landmarks: Perhaps the church will be restored after the war, but much of the original detail has been lost.

9) 2015: ISIS destroys this statue of the ancient king of Hatra 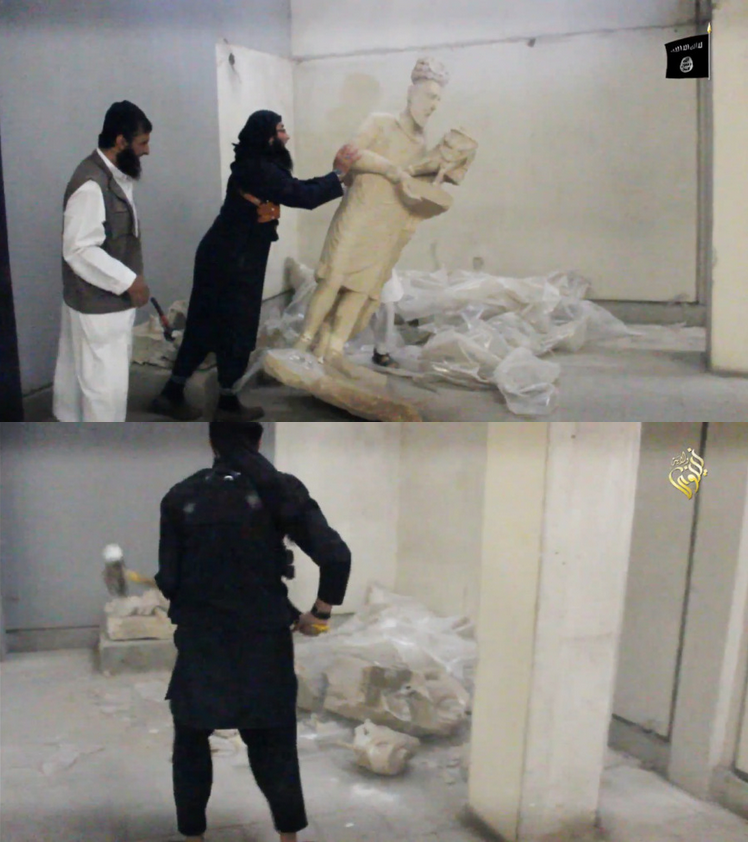 ISIS doesn't just destroy religious buildings. According to Christopher Jones, a PhD student in Near Eastern history at Columbia, the statue being destroyed here (part of the Mosul Museum collection) depicts an ancient king of Hatra. Hatra is an Iraqi city-state from the Roman era, and not a major part of Islamic theology.

Noyes believes that this, too, is part of ISIS's state-building project. He explains how the group is using the word "shirk," the worship of God through shrines, to refer to a much wider range of concepts it deems heretical. "It has become something of a catch-all phrase used to describe how the Islamic State defines itself: fighting the shirk of Bashar (al-Assad, the Syrian president), the shirk of passports, the shirk of national poets and museums, the shirk of Shia mosques," he writes. 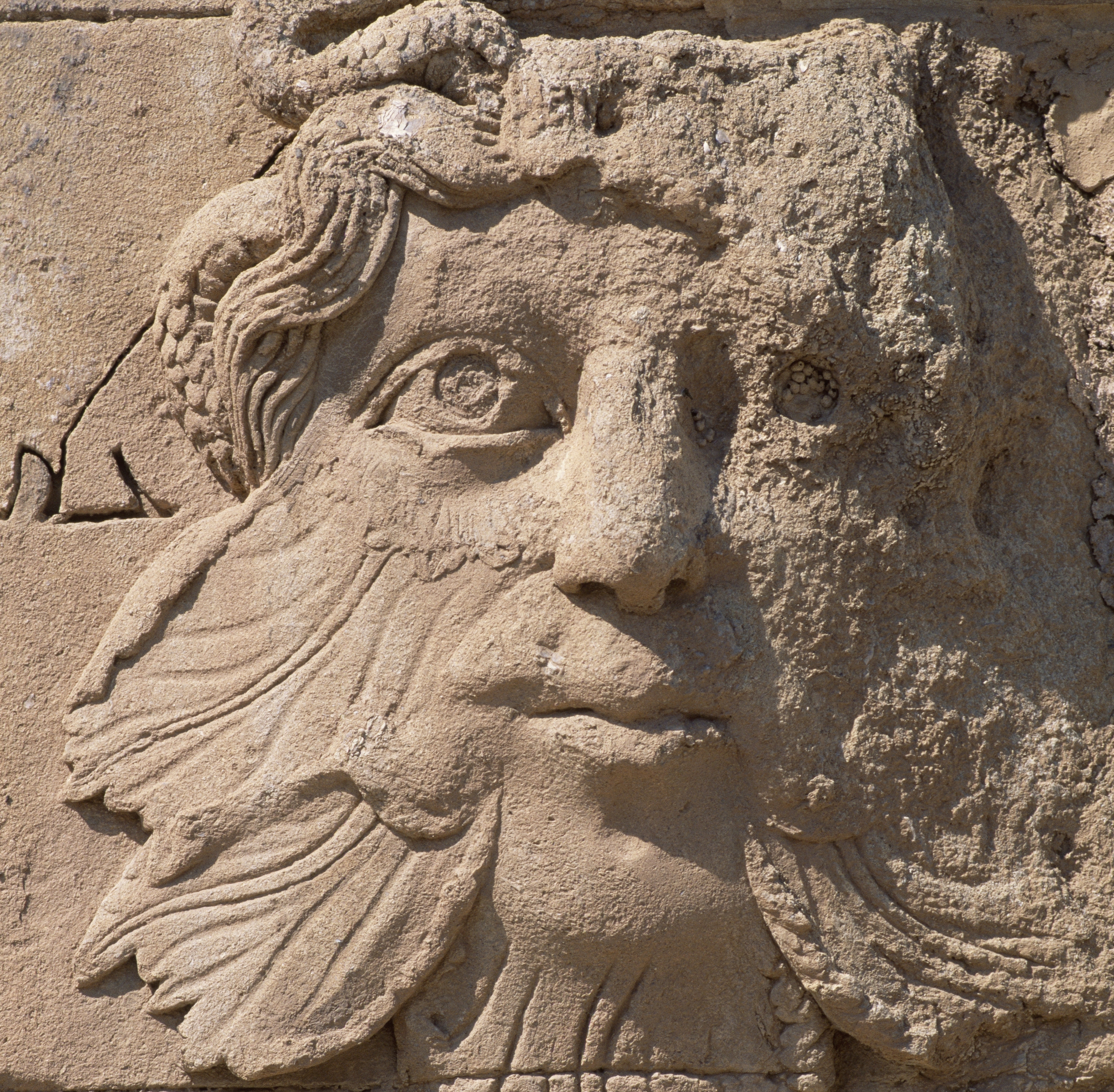 ISIS didn't just destroy Hatran art. According to the UN, ISIS has attempted to destroy what remains of Hatra itself. The city, a UN World Heritage Site, may have been demolished entirely. That includes the Temple of Shamash, some art from which is depicted above.

"The destruction of Hatra marks a turning point in the appalling strategy of cultural cleansing underway in Iraq," UNESCO director Irina Bokova said in joint statement with Abdulaziz Othman Altwaijri, director of an organization devoted to preserving Islamic cultural heritage. "This is a direct attack against the history of Islamic Arab cities, and it confirms the role of destruction of heritage in the propaganda of extremists groups." 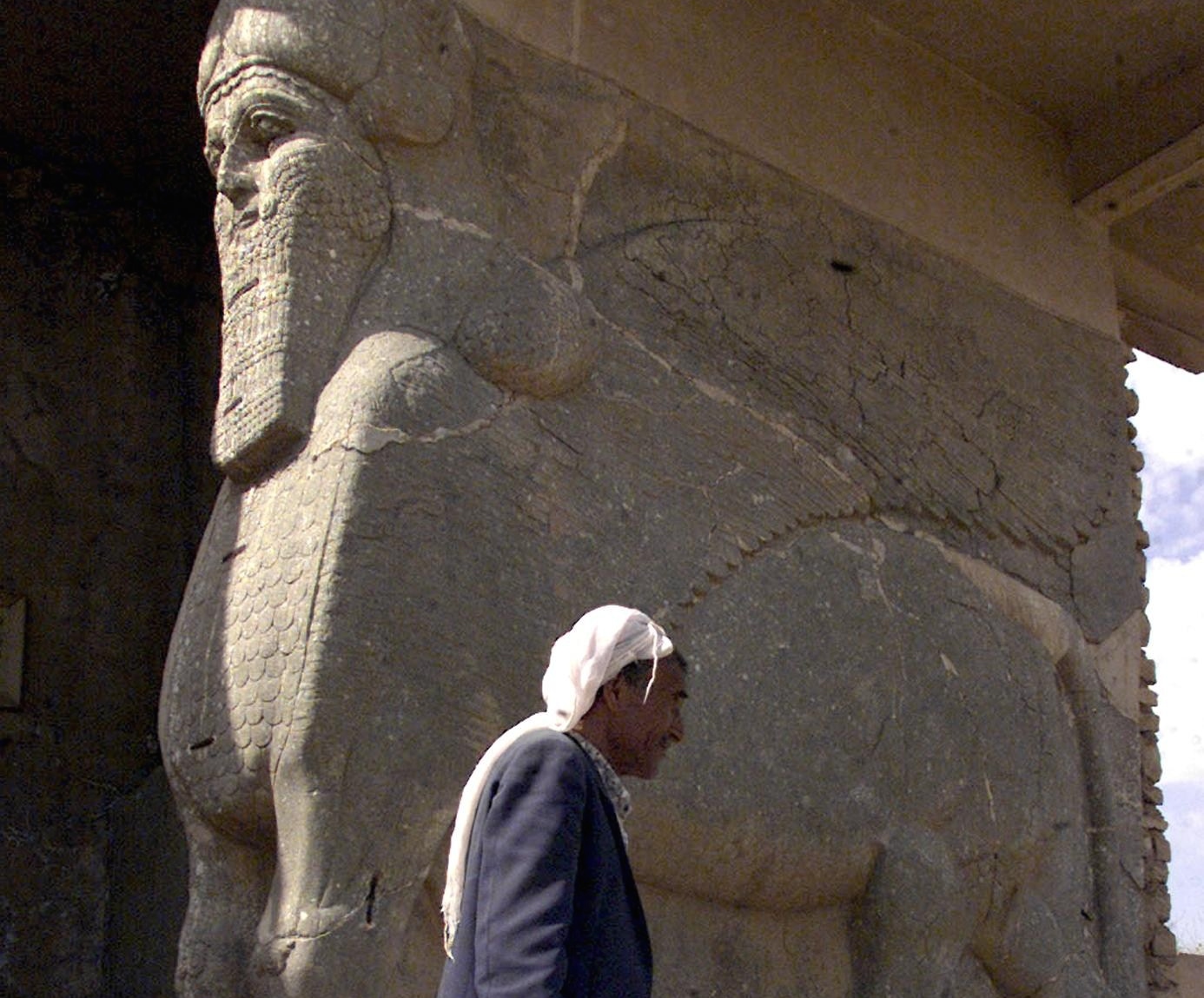 ISIS has also allegedly bulldozed Nimrud, an ancient Assyrian city in northern Iraq. The city shares a name with the biblical figure Nimrod, so there could be some theological motivation here. But it's important to note that ISIS also profits on the sale of antiquities: It destroys some publicly, while taking what it can sell to fuel its military and state-building efforts.

"They’ve been very consistent in doing two things: they destroy antiquities for effect, and they likely use the smokescreen of destruction to cover themselves while they move more transportable items for profit," Mark Vlasic, an adjunct professor at the Georgetown University Law Center, told US News. "It is, after all, a criminal organization."