The HIV death rate in the US is declining. But black Americans are much worse off.

Share All sharing options for: The HIV death rate in the US is declining. But black Americans are much worse off.

Black Americans make up a disproportionate share of the population newly infected with HIV, and they're more likely to die from the disease, according to two studies released Thursday by the Centers for Disease Control and Prevention.

The first study looked at 2013 data submitted by 61 health departments and 151 community-based organizations around the country. The analysis found black Americans accounted for 54.9 percent of all newly identified HIV-positive people at CDC-funded testing events — even though they make up roughly 12 percent of the US population, and about 45 percent of those tested at the events.

Since the study focused on certain CDC-funded programs, it might not apply perfectly to the entire US population living with HIV. But it provides a rough idea of how various groups in the US are affected by the disease, and how well they're linked to care.

The study found that, among newly diagnosed HIV-positive black individuals, just 44.5 percent were linked to medical care within 90 days of their diagnosis — far below the White House's 2015 goal to connect 85 percent of newly diagnosed HIV patients with care in that time period.

The second study found that the death rate per 1,000 Americans 13 and older living with HIV dropped from 28.4 among black Americans in 2008 to 20.5 in 2012. Although this was the largest decline among all racial and ethnic groups, black individuals with HIV were 13 percent more likely to die in 2012 than their white counterparts and 47 percent more likely than their Hispanic peers. 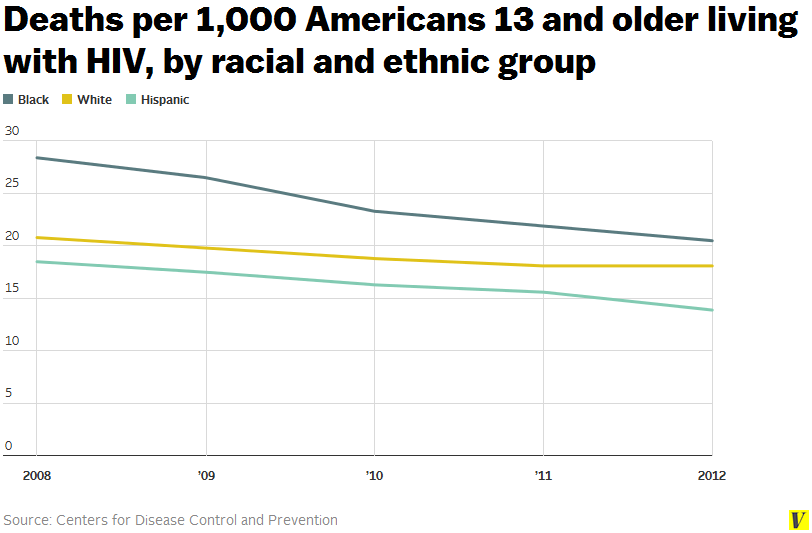 The measure tracks all deaths among people with HIV, so it might catch some deaths that weren't necessarily caused by the disease. But since HIV can lead to broad immune system deficiencies that increase the risks of other diseases, researchers argued this type of measure is a better way to track the HIV-related mortality rate than one focused solely on deaths linked explicitly to HIV.

In the past few decades, better testing and antiretroviral medications have made HIV significantly less deadly. But it appears, based on both studies' findings, that black Americans are less likely to gain access to this type of medical care.

The studies hope to identify where there are gaps in HIV prevention and medical care. They end with the same conclusion: more resources are needed in black communities.