On Tuesday, Alaska became the first red state to legally allow the possession, gifting, and growing of marijuana.

The legal change comes after Alaska voters in November approved a ballot initiative that fully legalized marijuana in the northernmost state. Alaska is the third state to legalize the drug after Colorado and Washington. Oregon and Washington, DC, will follow later this year.

As of Tuesday, Alaska's Ballot Measure 2 lets adults 21 and older possess up to one ounce of pot, maintain six marijuana plants, and gift and transport the drug. Smoking in public remains prohibited.

The measure will eventually allow for the commercial production and sales of marijuana. The Alcoholic Beverage Control Board, or a Marijuana Control Board if one is created, will regulate commercial production and sales. These rules must be finalized by November 24. The board must then begin accepting and processing applications for marijuana businesses by February 24, 2016. Sales are expected to begin sometime after.

Although the measure makes Alaska unique among Republican-controlled states, it's well within a fiercely independent and libertarian streak that has at times put the state's residents and courts at odds with its political leaders.

Alaska has a history of relaxed marijuana laws

Alaska is one of the few states with sea otters and glaciers. It's also unique for its libertarian history with marijuana. (Saul Loeb / AFP via Getty Images)

Although it's a Republican stronghold, Alaska, through a court ruling, was one of the first states to decriminalize marijuana in 1975, and voters in 1998 legalized the drug for medicinal purposes.

But Alaska's legislators have not supported the judicial and electoral decisions, and have maintained laws that keep marijuana illegal outside of people's homes. There's no system for medical marijuana dispensaries in the state, which means patients have no place to buy the drug even after it's prescribed by their doctors.

"We have thousands of cardholders in the state who have no safe way to access their medicine," said Taylor Bickford, a spokesperson for the Campaign to Regulate Marijuana Like Alcohol in Alaska. "They're forced to criminalize themselves and engage in the black market in order to gain access to the medicine that they've been prescribed to by their doctor."

The disconnect is a result of the nuances of Alaska's politics. Although Alaskan voters — and the state constitution, which maintains strong protections for rights to privacy — are conservative in a fairly libertarian sense, lawmakers are more traditionally conservative when it comes to marijuana.

Part of the legalization initiative's purpose, according to supporters, is to reinforce Alaska's existing laws for decriminalization and medical marijuana. If legislators aren't going to uphold such policies, then an initiative that allows marijuana possession and dispensaries across the state should.

Of course, the measure goes much further than merely protecting existing laws for marijuana. Alaska became the third state to legalize marijuana after Colorado and Washington. Some in the opposition were calling for the state to slow down and wait to see how legalization efforts pan out elsewhere.

"What's the rush?" asked Charles Fedullo, a spokesperson for the opposition campaign Vote No on 2. "We've already seen concerns come from public safety officials in Colorado."

Marijuana use is already relatively common in Alaska

Supporters of legalization want to bring the underground market into legal, regulated shops, like those seen in Colorado. (Aaron Ontiveroz / Denver Post via Getty Images)

Bickford, a spokesperson for the Campaign to Regulate Marijuana Like Alcohol in Alaska, said the campaign focused on how intrusive prohibition can be for Alaskans who do nothing illegal besides use marijuana.

"This is a conservative state, but it's a state with a heavy libertarian streak," Bickford said. "People here generally want to be left alone and really don't think the government is the solution to their problems."

Alaskans are tired of "the failed policies of prohibition," Bickford said. He pointed to an American Civil Liberties Union report that found that, despite decriminalization in the state, thousands of Alaskans are arrested for marijuana possession each year at a cost of nearly $8.5 million to law enforcement.

One of the prominent concerns with legalization is that it will lead to increased use, which studies show has been the case for adults — but not teens — in states that allow medical marijuana. But Bickford said prohibition was already failing to hold down pot use in Alaska, which has more marijuana users per capita than the rest of the country. In his view, legalizing possession and sales couldn't and wouldn't increase rates much further. 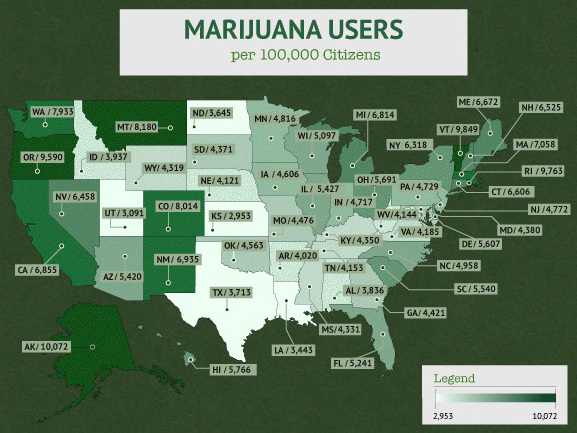 "We're not talking about introducing [marijuana] to the state for the first time," Bickford said. "We're talking about moving it out of the criminal underground into a regulated environment."

A teenager with a marijuana joint. (PYMCA / Universal Images Group via Getty Images)

Fedullo, a spokesperson for Vote No on 2, said the campaign had concerns about Colorado's experiences with marijuana legalization, arguing that teen marijuana use, which could lead to developmental problems, increased in Colorado after the legalization of medical marijuana.

Data on teen marijuana use in Colorado for 2014, the first year retail sales began in the state, is unavailable. But Colorado's rates of teen marijuana use have actually dropped since 1999, even after medical marijuana dispensaries opened widely after 2007 and possession was fully legalized in December 2012. 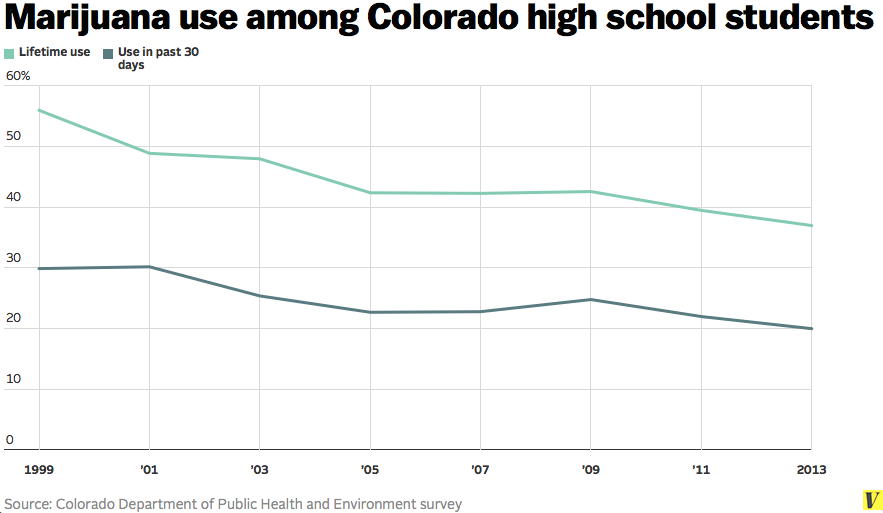 Fedullo also expressed a concern shared by legalization advocates and opponents alike: the commercialization of marijuana will encourage the for-profit pot industry to market its product to the people who are most vulnerable to drug abuse, including teens. That could, he argued, lead to more drug abuse.

Two ways a for-profit marijuana industry may encourage more heavy use are dabbing, in which a highly concentrated marijuana-based oil is vaporized and inhaled, and marijuana-laced edibles. Both have reportedly become more popular in Colorado following the drug's legalization, leading to concerns that more potent forms of pot could lead to more risks.

"They call it dabbing because just a little dab will do you in," Kristina Woolston, a spokesperson for the anti-legalization campaign, said in May. "Because of the concentration and because of the mechanism in which it's activated, it is very much like the crack cocaine of marijuana."

Although the concentrates are more potent, they're still marijuana — a drug that the research shows is much safer than crack cocaine or even alcohol.

GoodRx made money selling your health data. The FTC is making it pay.