If Katy Perry kissed a girl and liked it in Arizona, she could be fired

Share All sharing options for: If Katy Perry kissed a girl and liked it in Arizona, she could be fired

Katy Perry sang "I kissed a girl and I liked it" at Sunday's 2015 Super Bowl halftime show in Arizona. But Christine Quinn, former speaker of the New York City Council, pointed out that the pop star could be fired — legally — if she kissed a person of the same sex in the state, where it's legal to terminate someone from a job based on sexual orientation.

If@katyperry kissed a girl & liked it in AZ she could be fired. Change that@AthleteAlly pledge #Superbowl2015. We need antilgbt discrim laws

Arizona is among 32 states that don't have statewide nondiscrimination laws for all LGBT residents, according to the American Civil Liberties Union. Eighteen states and Washington, DC, protect workers from discrimination based on sexual orientation and gender identity, while another three states only protect gay, lesbian, and bisexual workers. 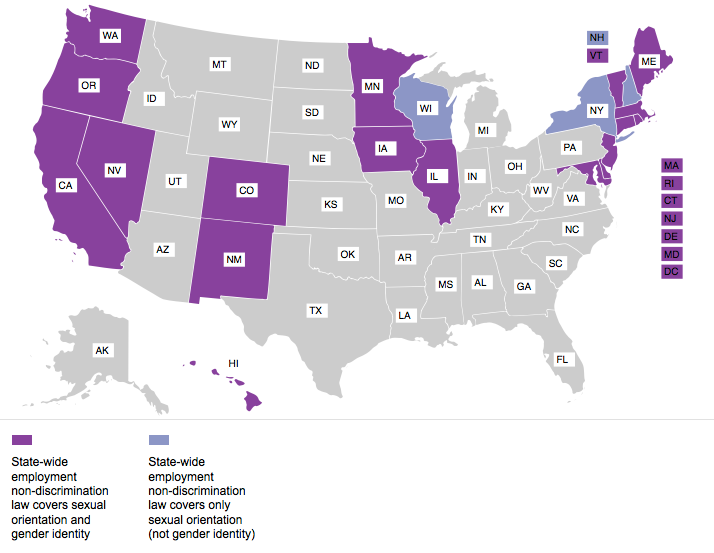 "We really have to address these issues of discrimination against LGBT people in a holistic manner," Ian Thompson, legislative representative for LGBT issues at the ACLU, previously told Vox. "There's definitely a lot of work still to be done."

A 2011 study from the Williams Institute found that about 9.2 percent of openly gay, lesbian, and bisexual people were fired or denied employment based on their sexual orientation between 2003 and 2007. And 38.2 percent were harassed on the job because of their sexuality.

Nondiscrimination protections also generally apply to housing and public accommodations, such as service in restaurants and hotels. But in states without such protections, LGBT people can be denied housing or service because of their sexual orientation or gender identity.

A 2013 study from the US Department of Housing and Urban Development found same-sex couples experience less favorable treatment than heterosexual couples in the online rental housing market. But the study also found that nondiscrimination protections didn't appear to change how same-sex couples were treated.

The refusal of some bakeries and wedding-associated businesses to service gay couples, based on religious opposition, has put a national spotlight on discrimination in places that serve the general public. LGBT advocates say these kind of cases — and the laws behind them — will become the next frontier of civil rights battles as the debate over same-sex marriage progresses.