Share All sharing options for: The White House is taking a big step to let heroin users get the medicine they need

There are drugs that could save the lives of thousands of heroin addicts. But America is so mindlessly anti-drug that many treatment programs refuse to allow them.

The Huffington Post on January 28 published an in-depth look at one of the best treatments for addiction to heroin, prescription painkillers, and other opioids: Suboxone and methadone. The story goes through the struggles of various addicts and the tough time they face getting the care they need, showing one of the many senseless failures of America's war on drugs.

The federal government is making moves to change that. The White House's Office of National Drug Control Policy on Thursday told the Huffington Post that it will withhold federal funding to drug courts if they refuse to let addicts attend rehabilitation treatments that provide Suboxone and methadone.

Methadone and Suboxone, which diminish withdrawal symptoms and suppress the pleasurable effects of opioids, are proven treatments for heroin addiction. Decades of research have deemed them effective. The Centers for Disease Control and Prevention and the National Institute on Drug Abuse acknowledge their medical value.

Medication for opioid use disorders=standard of care. Too many ppl are dying to withhold this valuable treatment. http://t.co/GKil92lu9h

There's a catch to Suboxone and methadone: they're opioids, and proper treatment can involve taking them for years to avoid relapse. So their use can look a lot like replacing one addictive drug with another. The truth is methadone and Suboxone are much safer and suppress the effects — mainly the euphoria — that make drugs like heroin dangerously addictive. But there's a widely held belief that methadone and Suboxone mask addiction rather than treat it.

A YouGov survey of 1,000 US adults, commissioned by the Huffington Post in January, found 40 percent of respondents said drugs like methadone and Suboxone are more dangerous than helpful, compared with 24 percent who said they're more helpful. Roughly 36 percent weren't sure.

The Huffington Post's Jason Cherkis found this misconception even in drug-abuse treatment centers:

While medical schools in the U.S. mostly ignore addictive diseases, the majority of front-line treatment workers, the [National Center on Addiction and Substance Abuse] study found, are low-skilled and poorly trained, incapable of providing the bare minimum of medical care. These same workers also tend to be opposed to overhauling the system. As the study pointed out, they remain loyal to "intervention techniques that employ confrontation and coercion — techniques that contradict evidence-based practice." Those with "a strong 12-step orientation" tended to hold research-supported approaches in low regard.

This is why methadone and Suboxone aren't standard treatments for addiction across the nation. If even the people who want to help drug addicts don't get it right, it's not surprising the rest of the population — and the elected officials who govern over them — don't either.

As the Huffington Post's investigation found, the public health side of the war on drugs rarely gets the kind of support the law enforcement side gets. If the public health problem is acknowledged, it's usually with a half-hearted focus on abstinence-only programs that promote the same no-tolerance, punitive approach as the rest of the drug war.

Karyn Hascal, The Healing Place's president and CEO, said she would never allow Suboxone in her treatment program because her 12-step curriculum is "a drug-free model. There's kind of a conflict between drug-free and Suboxone."

For policymakers, denying addicts the best scientifically proven treatment carries no political cost. But there's a human cost to maintaining a status quo in which perpetual relapse is considered a natural part of a heroin addict's journey to recovery. Relapse for a heroin addict is no mere setback. It can be deadly. A sober addict leaves a treatment program with the physical cravings still strong but his tolerance gone. Shooting the same amount of heroin the addict was used to before treatment can more easily lead to a fatal overdose.

The neglect toward the treatment side allows the underlying problem of addiction to stand, letting "drug epidemics" come and go seemingly one after another in the US.

Addiction is a medical problem that's far more complicated than having the willpower to resist cravings for one drug. Maia Szalavitz, a journalist who's covered the drug war and addiction for years, wrote in December for Pacific Standard:

Among people who have good coping skills, a sense of meaning and purpose, the opportunity for productive work, and good mental health, addiction is rare. Only about 10-15 percent of people who try heroin become addicted to it; the same is true for crack. If you don't use these drugs during adolescence or early adulthood, the odds of addiction in later life are in the single digits.

The research shows that addiction needs to be treated through what health policy wonks call "harm reduction." Sometimes these solutions aren't ideal — it might be best, for example, to treat a drug addict by medicating him with other drugs that curtail his addiction. If that's what best minimizes the risks of addiction and keeps someone from a fatal overdose, many experts consider it the most sensible public health option.

But instead of treating drug abuse as a medical problem, addiction is very often viewed first as a criminal justice problem.

This is your government on the war on drugs

These can relieve pain, but they're dangerous — especially when paired with other drugs. (Education Images/UIG via Getty Images)

The slow uptake of methadone and Suboxone treatments is an example of how illicit drug use has been treated by different levels of government for decades.

When the crack cocaine epidemic swept the nation in the 1980s, federal and state officials responded by increasing drug trafficking penalties and turning America into the world's incarceration leader. The idea was to go after supply by locking up drug dealers and seizing their product, hopefully driving up prices and making a drug habit less affordable. (Between 1986 and 2007, the median bulk price of crack cocaine fell by around 54 percent.)

When prescription painkiller deaths began to rise throughout the 2000s, state and federal officials first went after "pill mills" in which doctors and pharmacists provided painkillers unscrupulously or for non-medical purposes. But the evidence showed restricted access to prescription painkillers was pushing people to the more dangerous heroin. (The CDC reports heroin overdose deaths nearly doubled between 2011 and 2013, from about 4,400 to nearly 8,300.)

"We always were concerned about heroin," Kevin Sabet, a former senior drug policy official for the Obama administration, told the Huffington Post. "We were always cognizant of the push-down, pop-up problem. But we weren't about to let these pill mills flourish in the name of worrying about something that hadn't happened yet.… When crooks are putting on white coats and handing out pills like candy, how could we expect a responsible administration not to act?"

Change may be coming

The Obama administration says it wants to change its approach to the war on drugs to put more emphasis on the medical rather than law enforcement side. Thursday's announcement that it will now force federally funded drug courts to allow methadone and Suboxone treatments seems to be part of that broader plan.

When I spoke to Botticelli, head of the White House's Office of National Drug Control Policy (ONDCP), in September, he emphasized shifts in the drug control budget and other policies, such as Obamacare's rules for substance abuse coverage, that make addiction treatment more of a priority.

"The main distinction with this plan is the general acknowledgment that substance use is a public health issue," Botticelli said. "We can't arrest our way out of the problem, and we really need to focus our attention on proven public health strategies to make a significant difference as it relates to drug use and consequences to that in the United States."

ONDCP's budget plan increases the share of funding going to treatment and prevention programs from 40.1 percent to 43.1 percent between 2014 and 2015. 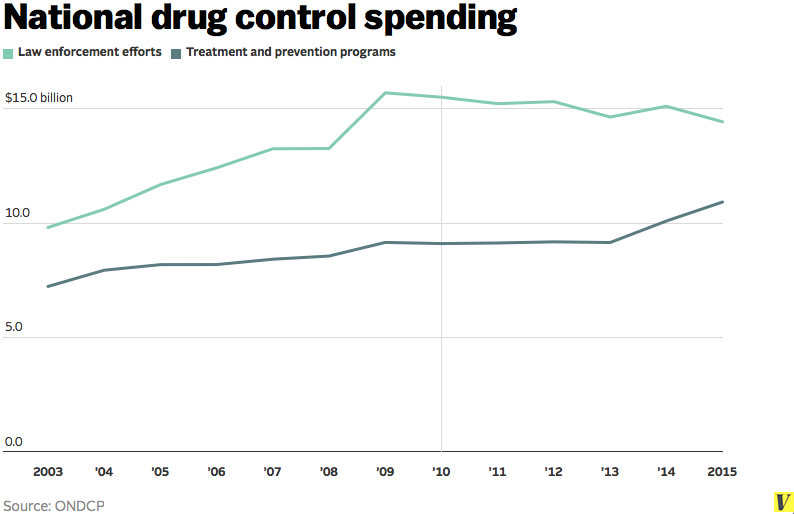 "What the plan acknowledges is that yes, historically, a lot of the efforts have focused on the supply side," Botticelli said, "and we haven't paid enough time and attention to the public health issues."

Critics point out that a majority of the budget still goes to law enforcement spending.

"ONDCP has been putting greater rhetorical emphasis on treatment over 'drug war' since day one of this administration. Emphasis on rhetorical," Tom Angell, founder of the pro-legalization Marijuana Majority, wrote in an email at the time. "The drug control budgets continue to strongly emphasize funding for failed strategies like arrests, incarceration, and interdiction over effective approaches like treatment and prevention — popular rhetoric about 'ending the drug war' to the contrary."

After decades of fighting the war on drugs, the shift — like those in many other policy areas — is coming incrementally. The downside is that many drug addicts don't have time to wait.

"It's going to tip," Jeremy Engel, a Kentucky doctor, told the Huffington Post. "It's just a matter of how many people will die before that."