Can this 170-year-old map explain your marriage?

Share All sharing options for: Can this 170-year-old map explain your marriage?

A lot's changed since 1845, but when it comes to courtship and marriage, a lot of things have stayed the same.

This 1845 marriage map, produced by John Dainty of Philadelphia, was for sale in bookstores nationwide years ago. It takes the familiar emotional geography of marriage and lends it cartographic precision. Despite its age, it still captures a typical romantic journey toward marriage (you can hover over each image to zoom in or click here for a larger version): 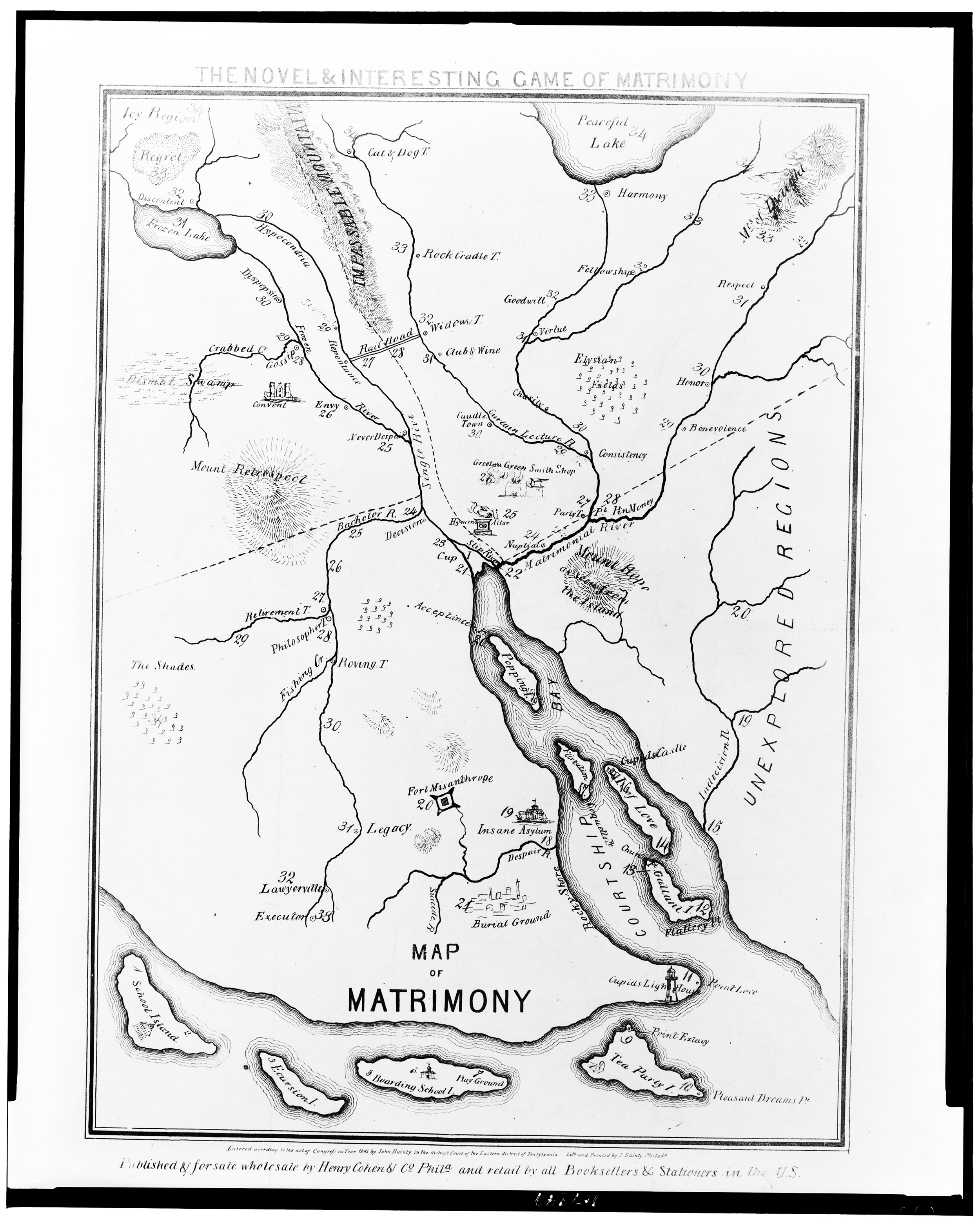 Singles be warned — this map is biased toward the married set, so you won't see landmarks dedicated to some of singledom's pleasures, like Mount Enjoying A Quiet Night Alone or Fort Making Out With Your Roommate's Friend.

However, a romantic life ending in marriage is well-represented. The map depicts life's branching possibilities through the progressing numbers on the path. First, there's the lazy river of youth, with school and the playground floating by: 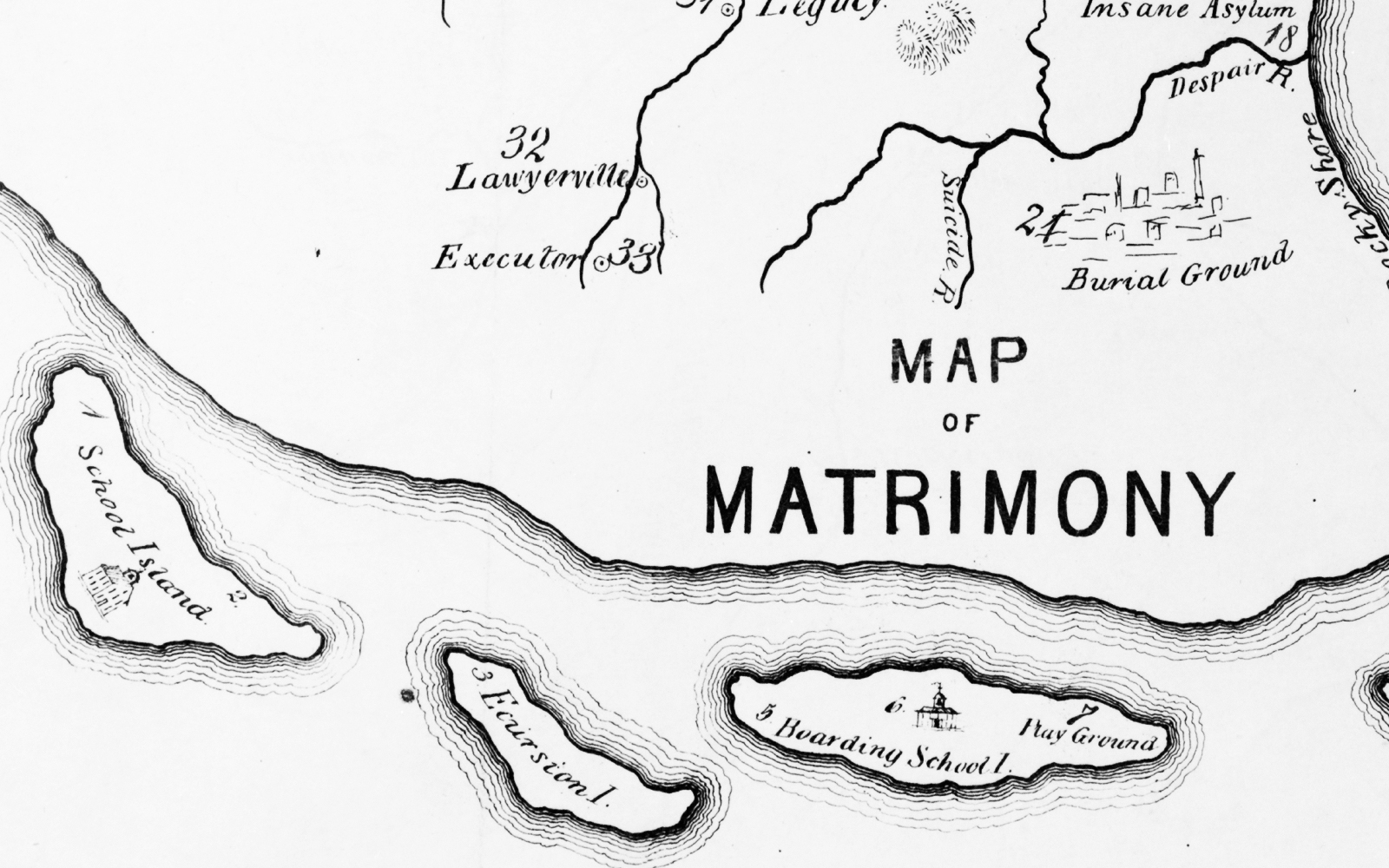 The marriage map includes landmarks of youth. (Library of Congress)

From there, you journey to Courtship Bay, where you'll find the island of Flirtation and waves of Flattery. If things don't go well, maybe you'll be looking at a visit to the insane asylum and a stay at Fort Misanthrope (hopefully they have ice cream there): 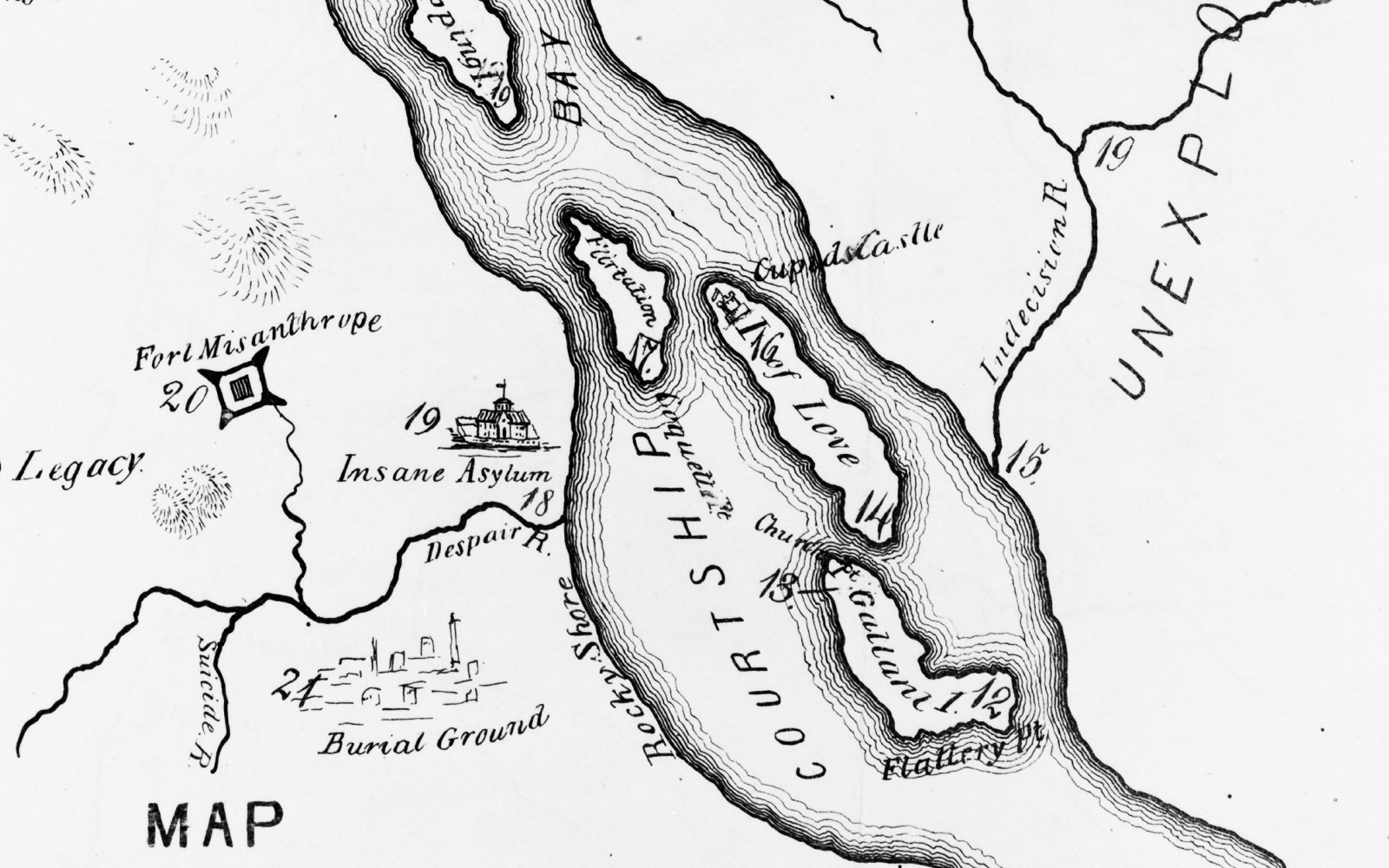 Next there's the crossroads of bachelordom, for both men and women. Down one road lies retirement and fishing and down another is the convent (remember — this map comes courtesy of 1845). In the other direction, toward marriage, you'll find Hymen's Altar (submitted to you without comment): 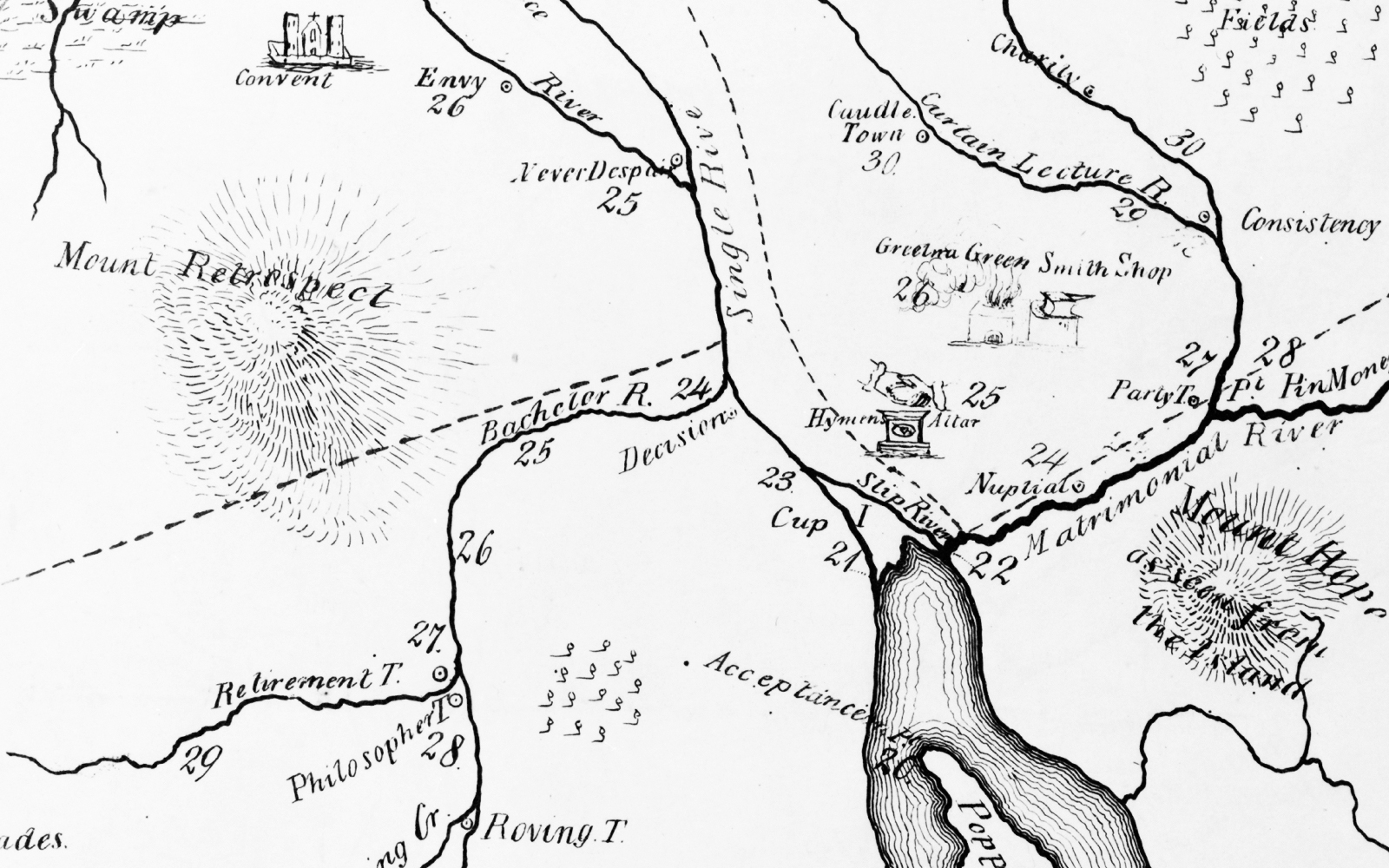 Don't get married? Look forward to fishing or the convent. (Library of Congress)

That long romantic journey leads to a more brochure-friendly destination and the many joys marriage can bring — the Elysian Fields of matrimony, surrounded by Respect, Harmony, and Goodwill. It's not a bad trip: 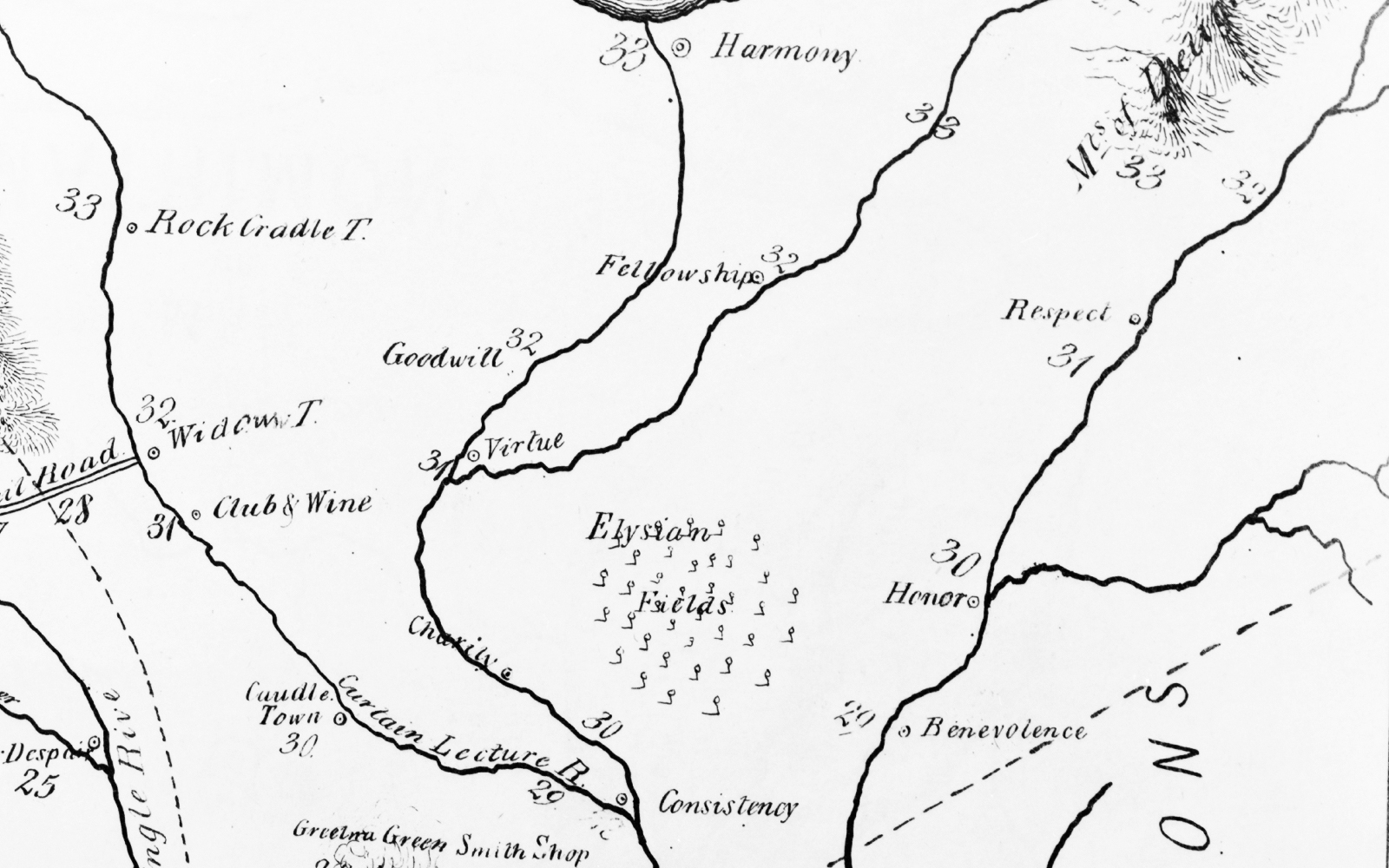 Marriage at its best is like a beautiful open field, but without allergies. (Library of Congress)