Geoengineering is a ludicrous way to deal with climate change. Let's consider it anyway.

Share All sharing options for: Geoengineering is a ludicrous way to deal with climate change. Let's consider it anyway.

Geoengineering — the idea of deliberately fiddling with the Earth's climate to reduce global warming — has long been seen as a preposterous notion. Surely we'd have to be truly desperate before we ever tried something like blotting out sunlight to cool the planet.

Right. But that's why it's so striking that many scientists now think we should at least consider the idea

This week, an expert panel convened by the National Academy of Sciences released two big reports on "climate intervention" schemes. The first report was harmless enough, exploring ways to suck out some of the heat-trapping carbon-dioxide we've put into the atmosphere. Those technologies are quite promising; they're just expensive and likely limited. Definitely worth researching.

The second report dealt with far more controversial ideas like putting reflective particles in the atmosphere to block some sunlight and cool the planet. This could be done cheaply, but it's also risky, and could muck up global rainfall patterns. The report warned we should absolutely not try this anytime soon. It's still too poorly understood. But it is worth studying further — just in case.

Neither of these ideas can be a substitute for the traditional approach to tackling climate change: burning fewer fossil fuels and emitting fewer greenhouse gases. The trouble is that we've been slow to do that, and we've locked in a significant amount of global warming already, possibly 1.5°C or more. So, the report notes, we may need some additional tools to deal with the mess we've made.

"That scientists are even considering technological interventions should be a wake-up call that we need to do more now to reduce emissions, which is the most effective, least risky way to combat climate change," said Marcia McNutt, the editor-in-chief of Science who led the committee, in a statement.

The basic case for considering geoengineering

The science of global warming is straightforward. When we burn fossil fuels, we add carbon-dioxide to the atmosphere. That extra CO2 traps additional heat and warms the planet further. If we want to stop warming the planet, we should burn less coal, oil, and gas.

The catch is that we've been slow to do this. Emissions keep rising year after year. We've now warmed the planet about 1.4°F (0.8°C) since the 19th century and have locked in drastic changes to the Earth's climate, like melting ice caps and rising sea levels.

We've also reached the point where cutting emissions alone won't avert all negative impacts. Scientists have found that ocean levels will keep rising for the next 100 years even if we zero out all emissions tomorrow — thanks to the extra heat we've loaded into the system. Our only choice, at this point, is between a medium rise and a really huge rise

That's why some scientists, like Harvard's David Keith, argue that we should at least research additional ideas like reflecting sunlight to cool the Earth.

"These technologies appear to provide a pathway by which we could substantially reduce climate risks over the next half-century," Keith told me in an interview. "That means reducing the risks of sea-level rise, reducing the risks of stress for the crops of people in the poorest and hottest parts of the world."

"This would be complementary to emissions reductions," Keith clarified. "Nothing changes the fact that in the long run, the only way to manage carbon risk is to stop emitting carbon-dioxide. But, similarly ... nothing plausible we do to reduce emissions in the next, say, quarter-century is going to materially reduce the risks for real people, especially some of the poorest and most vulnerable on our planet from climate change."

Why it's risky to cool the Earth by reflecting sunlight

So let's look at this outlandish scheme — reflecting sunlight to counteract the effects of carbon-dioxide and cool the Earth. The National Academy of Sciences report calls this "albedo modification," and notes there are a few cheap and simple ways we could do this.

We could spray sulfate particles into the stratosphere to reflect more incoming sunlight back into space. This is basically what volcanic eruptions do: when Mount Pinatubo erupted in 1991, it temporarily lowered the Earth's temperature by nearly 0.3°C for three years. Or we could try to increase the reflectivity of clouds by, say, spraying seawater into the atmosphere.

The catch is that these methods could have unforeseen and awful side effects. It's entirely possible that putting lots of reflective particles into the atmosphere would mess up global rainfall and monsoon patterns. Adding sulfate to the stratosphere might deplete the ozone layer that protects us from the sun's harmful UV rays. Some past volcanic eruptions — like Tambora in 1815 — have led to widespread crop failures.

The report notes that scientists still don't have a good handle on all the risks involved, and says we shouldn't even term this "engineering," since that implies a level of control we don't have. Little wonder that Raymond Pierrehumbert, a University of Chicago scientist who was on the committee, says these solar-reflection proposals are "wildly, utterly, howlingly barking mad."

Another issue: Say we tried to reflect some sunlight but continued burning fossil fuels and kept loading the atmosphere with carbon-dioxide. All that extra CO2 would continue to trap heat on the Earth — which means we'd have to keep spraying reflective particles into the atmosphere pretty much forever (the particles don't stay up there long).

If, for whatever reason, we ever stopped spraying, the Earth would heat up drastically — 1.5°C or more in a single decade. That would be a catastrophe:

Results of 11 climate models showing global average temperatures with albedo modification. It then stops after year 50 — and temperatures rise by 1.5°C in one decade. (Jones et. al 2013)

Better hope no one slips up.

Geoengineering also doesn't address some of the most dire effects of climate change. For example, as we pump out more carbon-dioxide, some of it dissolves in the oceans and makes the seas more acidic. That chews away at coral reefs and poses a major risk to marine life. Reflecting a bit more sunlight does nothing for ocean acidification.

Perhaps the biggest pitfalls are geopolitical. The technology to reflect sunlight is so cheap that individual countries or even a wealthy billionaire could try it. What then? Who decides how much sunlight to reflect? "We lack even the basics of how to create a norm of behaviors around this technology," Keith told me, "let alone a treaty to make decisions about how to set the thermostat."

Even so, we should study solar geoengineering further 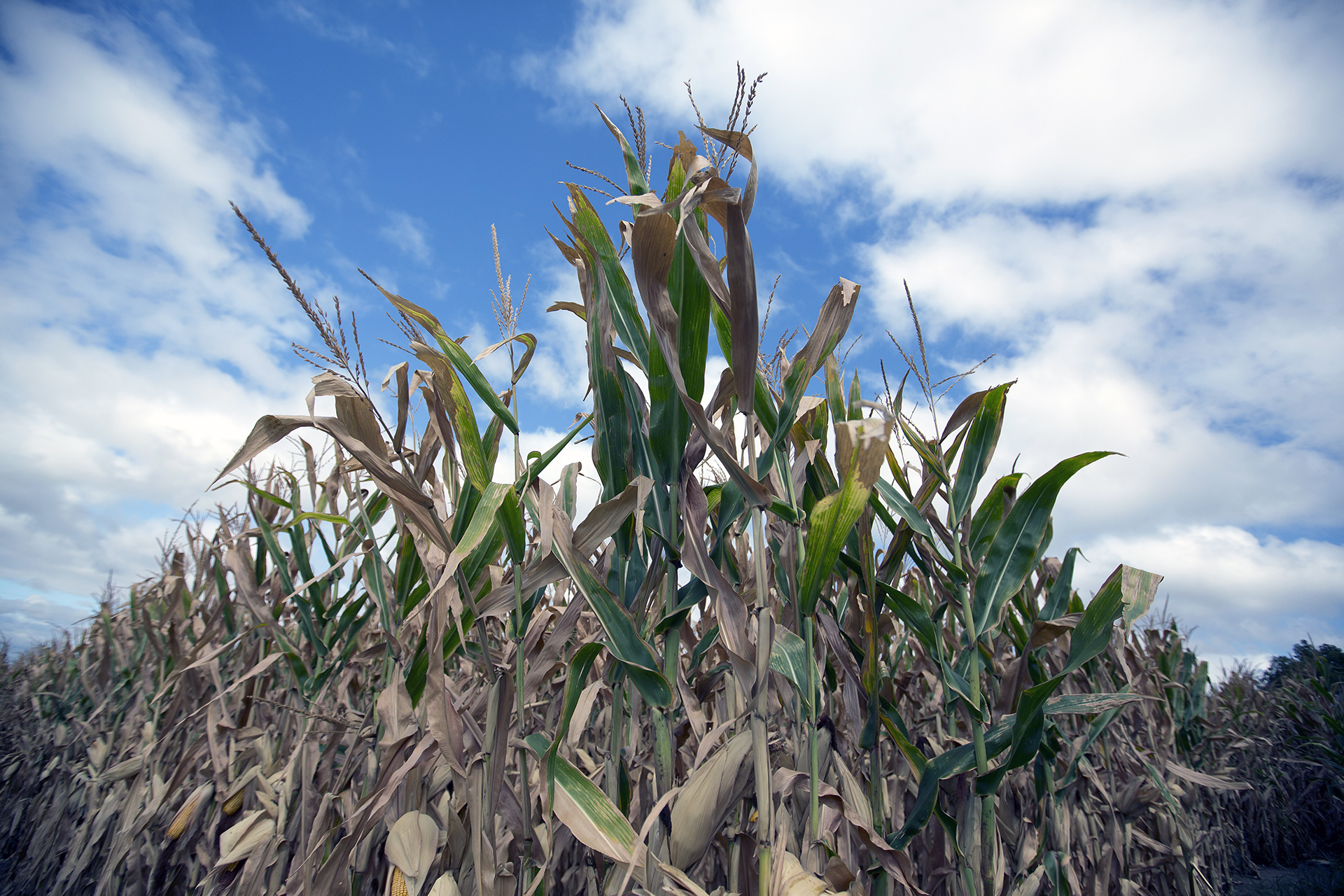 Would we need to consider geoengineering in an emergency situation? (USDA)

The committee warns that no one should try any large-scale sunlight-reflecting schemes right now. The risks are too poorly understood. The dangers are too great. Keith agrees, calling for a global moratorium on deployment until we understand the technology better.

But, significantly, the report does urge scientists to start studying these methods further, both through better computer modeling and perhaps through cautious, small-scale experiments.

Even small-scale experiments tend to be hugely controversial

Why? Partly because global warming may become so severe that we have to consider some albedo modification — at least as part of a broader strategy.

Let's say we're slow to cut emissions in the decades ahead, and global warming leads to massive crop failures throughout the tropics. The world might face a tough decision of whether to deploy solar geoengineering in addition to cutting emissions and potentially pulling more carbon out of the atmosphere in order to blunt the impacts.

The other rationale for research? At some point, someone might decide to deploy solar geoengineering unilaterally. What if China decides to use it in order to alter rainfall patterns? It might be a good idea for scientists to have a better understanding of what will ensue. The committee notes that the world should also start thinking seriously about global governance issues.

For years, scientists have mainly studied geoengineering through computer modeling. The US doesn't have any sort of formal process for permitting small-scale experiments. It's a touchy subject. The United Kingdom put forward a $150 million research program in 2009 — and, as Eli Kintisch reports, most of the proposed field experiments (like releasing extra water vapor into the air) have been bogged in controversy.

The National Research Council is now recommending that the government start funding at least some research into the matter. (Keith, for instance, has proposed releasing a pound or so of sulfuric acid into the atmosphere to see the effects of ozone.) It's unclear whether that recommendation will translate into federal funding. But the subject is slowly becoming less taboo.

What about sucking carbon dioxide out of the atmosphere?

Risky schemes to reflect sunlight get all the attention, but the committee also looked at another option for tackling global warming — pulling carbon dioxide out of the atmosphere.

We could do this by planting more trees, although there’s only so much land to go around (especially as demand for cropland grows). We could harvest plants that scoop carbon dioxide out of the atmosphere, burn them for electricity, and then capture the resulting carbon-dioxide at the smokestack and bury it underground. This would, in theory, be carbon negative:

Or we could invent some sort of machine that scoops carbon-dioxide directly out of the air and buries it underground.

All of these options are pretty low-risk, so long as we can make sure the stored carbon stays underground. (The one exception is an idea for trying to fertilize the ocean with iron to promote the growth of plankton that absorb carbon-dioxide — that might have adverse side effects.)

The main drawbacks are that these technologies are immature, expensive and would act slowly. It's easy to burn a chunk of coal and release carbon-dioxide into the air, where it mixes in the atmosphere thoroughly. It's much, much harder to pluck that carbon dioxide back out. So it's unlikely we'll be able to devise a carbon-sucking machine that offsets all of our emissions. Just some.

Still, the reports recommend further research in this area, too. Indeed, these technologies may even become essential down the road. Most climate modeling suggests that we probably can't avoid drastic global warming — 3.6°F (2°C) or more — if we can't find a way to pull at least some carbon out of the atmosphere by the end of the century.

-- Here's an in-depth interview I did with David Keith discussing the pros and cons of geoengineering.

-- Eli Kintisch has an excellent piece surveying the landscape of research funding for geoengineering. One tidbit: "The biggest funder of geoengineering research has been a nonprofit fund supported by billionaire Bill Gates, which has disbursed some $8.5 million for research and meetings since 2007."

-- Raymond Pierrehumbert, one of the members of the committee, explainswhy he still thinks solar-reflection schemes are "wildly, utterly, howlingly barking mad."