Trump wants to ban all Muslim immigrants. What do other candidates say?

Share All sharing options for: Trump wants to ban all Muslim immigrants. What do other candidates say?

Donald Trump's statement that he thinks it's prudent to ban all Muslims, citizens or not, from entering the country until we can "figure out what is going on" is sure to be a top question in tonight's Republican debate on CNN.

Though every other presidential candidate has at least said that he or she "disagrees" with Trump's approach, Republicans have varied in how far they're willing to go in distancing themselves from Trump. And plenty of Republican candidates have advocated policies that would be anti-Muslim in effect, even if they stopped short of a blanket ban.

So where does each of the candidates stand? We compiled the statements they've made in one handy chart. 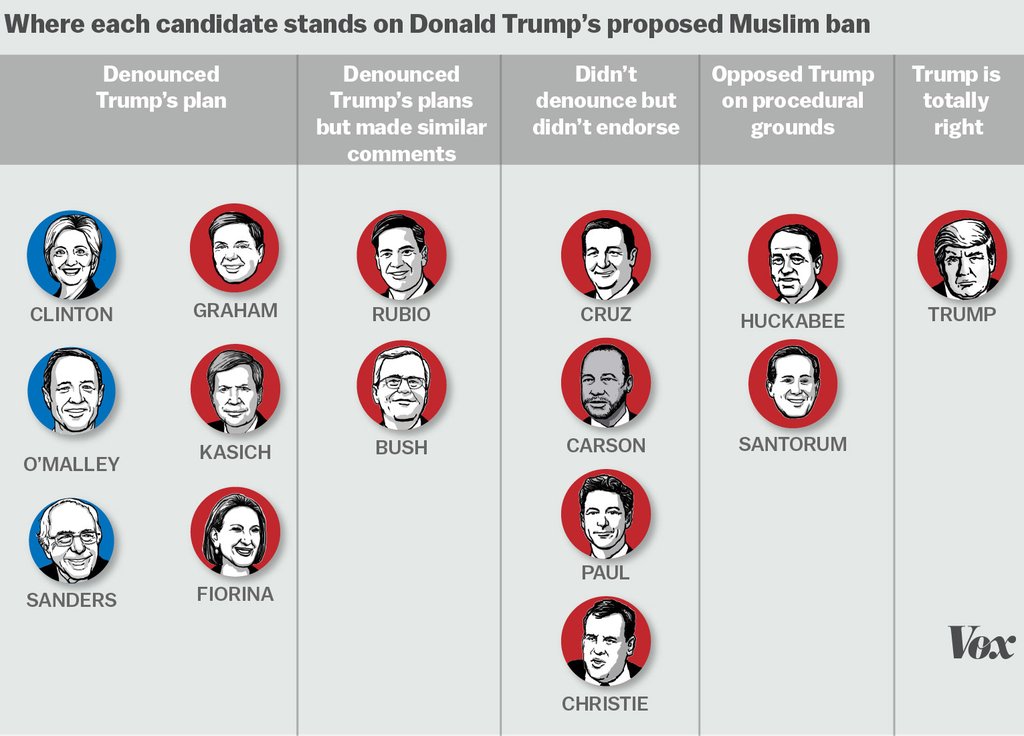 Still others, like former Florida Gov. Jeb Bush and Sen. Marco Rubio, have strongly condemned Trump's plan while having made remarks that suggest they do believe Muslims should receive higher scrutiny because of their religion. Fringe candidates Mike Huckabee and Rick Santorum admit Trump's plan is unworkable but still want to find a way to keep Muslims out of the country.

Some, like Carly Fiorina, have safely pointed out they don't think discrimination based on religion is constitutional. And bolder candidates, like Sen. Lindsey Graham and all of the Democratic candidates, have strongly condemned Trump's plan, calling it "reprehensible," "fascist," and taking "xenophobia and religious bigotry to a new level."