The 116 photos NASA picked to explain our world to aliens

Share All sharing options for: The 116 photos NASA picked to explain our world to aliens

If any intelligent life in our galaxy intercepts the Voyager spacecraft, if they evolved the sense of vision, and if they can decode the instructions provided, these 116 images are all they will know about our species and our planet, which by then could be long gone:

When Voyager 1 and Voyager 2 launched into space in 1977, their mission was to explore the outer solar system, and over the following decade, they did so admirably.

With an 8-track tape memory system and onboard computers that are thousands of times weaker than the phone in your pocket, the two spacecraft sent back an immense amount of imagery and information about the four gas giants, Jupiter, Saturn, Uranus, and Neptune.

But NASA knew that after the planetary tour was complete, the Voyagers would remain on a trajectory toward interstellar space, having gained enough velocity from Jupiter's gravity to eventually escape the grasp of the sun. Since they will orbit the Milky Way for the foreseeable future, the Voyagers should carry a message from their maker, NASA scientists decided.

The Voyager team tapped famous astronomer and science popularizer Carl Sagan to compose that message. Sagan's committee chose a copper phonograph LP as their medium, and over the course of six weeks they produced the "Golden Record": a collection of sounds and images that will probably outlast all human artifacts on Earth.

How would aliens know what to do with the Golden Record?

The records are mounted on the outside of Voyager 1 and Voyager 2 and protected by an aluminum case. Etched on the cover of that case are symbols explaining how to decode the record. Put yourself in an extraterrestrial's shoes and try to guess what the etchings seek to communicate. Stumped? Hover over or click on the yellow circles for the intended meaning of these interstellar brain teasers: 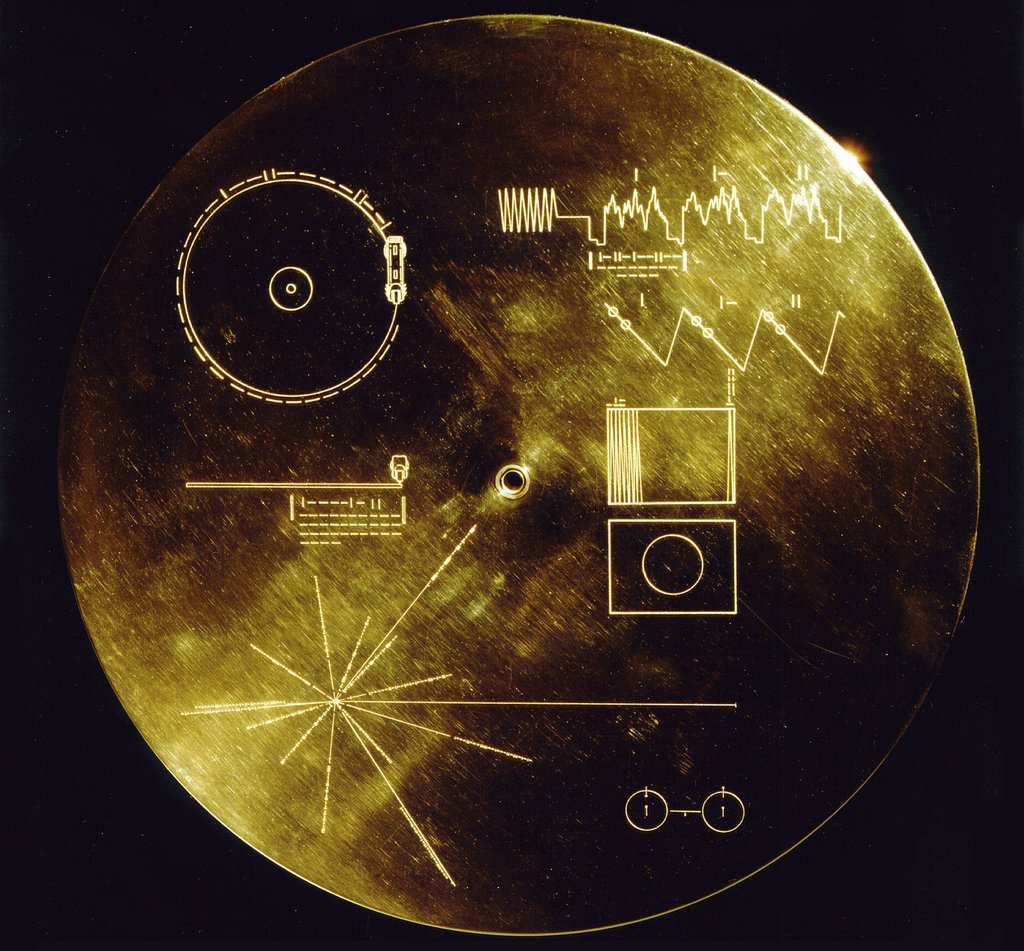 What else is on the Golden Record?

Any aliens who come across the Golden Record are in for a treat. It contains:

The committee also made space for a message from the president of the United States:

Where are they now?

Incredibly, Voyager 1 and Voyager 2 are still communicating with Earth — they aren't expected to lose power until the 2020s. That's how NASA knew that Voyager 1 became the first ever spacecraft to enter interstellar space in 2012: The probe detected high-density plasma characteristic of the space beyond the heliosphere (the bubble of solar wind created by the sun).

Voyager 2 is currently traveling through the outer layers of the heliosphere. It's moving southward relative to Earth's orbit, while Voyager 1 is moving northward. In more than 40,000 years, they will each pass closer to another star than they are to our sun. (Or, more accurately, stars will pass by them).

There are three other spacecraft headed toward interstellar space; two of them, Pioneer 10 and Pioneer 11, are shown in this somewhat dated illustration:

NASA launched Pioneer 10 and 11 in 1972 and 1973, and has since lost communication with both. They aren't traveling as fast as the Voyagers, but they will eventually enter interstellar space as well.

They too, carry a message for extraterrestrial life, in the form of a 6-by-9-inch gold-anodized aluminum plaque, designed by Sagan and other members of the team that would go on to create the Voyager Golden Record five years later.

Like the Golden Record, the plaque features the pulsar map, uses hydrogen to define the binary units, and depicts humankind. NASA faced a backlash for the nudity of the human figures.

The fifth probe that will exit our solar system is New Horizons, the spacecraft that flew by Pluto in 2015. It is headed in a broadly similar direction as Voyager 2, but having launched in 2006, it's many years behind. It may not reach interstellar space for another 30 years.

New Horizons was sent into space without any message like the Golden Record, but it's not too late to add one. A group led by Jon Lomberg, a member of Sagan's Golden Record team, is trying to convince NASA to upload a crowdsourced message to the probe for any intelligent life that might come across it.

The spacecraft's memory system is similar to a flash drive, and it wouldn't be as durable as the copper records on Voyager. "The most conservative estimates are a lifetime of a few decades. Other physicists and engineers believe the message might remain for centuries or even millennia," says the website of the message initiative, adding, more hopefully, "Another unknown is the advanced technology possessed by any ETs who find the spacecraft. They might have ways of reading the faded memory we cannot yet imagine."

It’s not you — movies are getting darker

Video: The 3 possible outcomes of the 2022 election

View all stories in Video