Why the US sent a missile destroyer into Chinese-claimed waters

Share All sharing options for: Why the US sent a missile destroyer into Chinese-claimed waters

On Monday night, the American missile destroyer Lassen sailed within 12 miles of a Chinese-built artificial island called Subi Reef, in the South China Sea. The goal, according to the US, was to challenge China's claims over what are generally understood to be international waters.

China was furious. A spokesperson said the Lassen "illegally entered" the waters and "threatened China’s sovereignty and security interests." On Tuesday, China sent two ships — the missile destroyer Lanzhou and patrol boat Taizhou — to the area and told the American ship to get out. The Americans ignored them.

This tension isn't going away: The US plans to send even more naval patrols into contested South China Sea waters in the coming days. "There have been naval operations in that region in recent days, and there will be more in the weeks and months to come," Secretary of Defense Ash Carter said during a Tuesday Senate hearing.

To understand why all this is happening and where it's going, you need to understand the backdrop. China is claiming important chunks of territory in the South China Sea, making its neighbors really nervous. America is taking the neighbors' side, but not just because it wants to side against China.

Where the dispute came from

The South China Sea is one of the tensest places in East Asia. The sea is resource-rich, full of valuable gas and fisheries and home to critically important trading routes. Six different countries — China, Taiwan, Brunei, Malaysia, Vietnam, and the Philippines — claim territory there.

China is, of course, the largest and strongest of those countries by far. As China's military and economic power has grown, it's become more assertive about its claims in the South China Sea.

China has a "well-established practice of oscillating between assertive actions to expand control followed by gestures to repair diplomatic ties and consolidate gains," an International Crisis Group report explains. "This cycle has become more compressed in recent years, with shorter lulls and more-frequent flare-ups, owing in part to China’s increased desire and capability to advance its claims."

One of China's tactics has been to build "sandcastles": small artificial islands that it builds in the middle of the sea by reclaiming reefs. International law allows countries to claim waters up to 12 nautical miles off territory they control, so China's goal here is to claim the water near its new landmasses. It also sometimes turns the islands into airstrips or places mobile artillery on them. Here's what one of those "sandcastles," Fiery Cross Reef, looked like in August 2014 (the left side of the slider) and January 2015 (the right side): 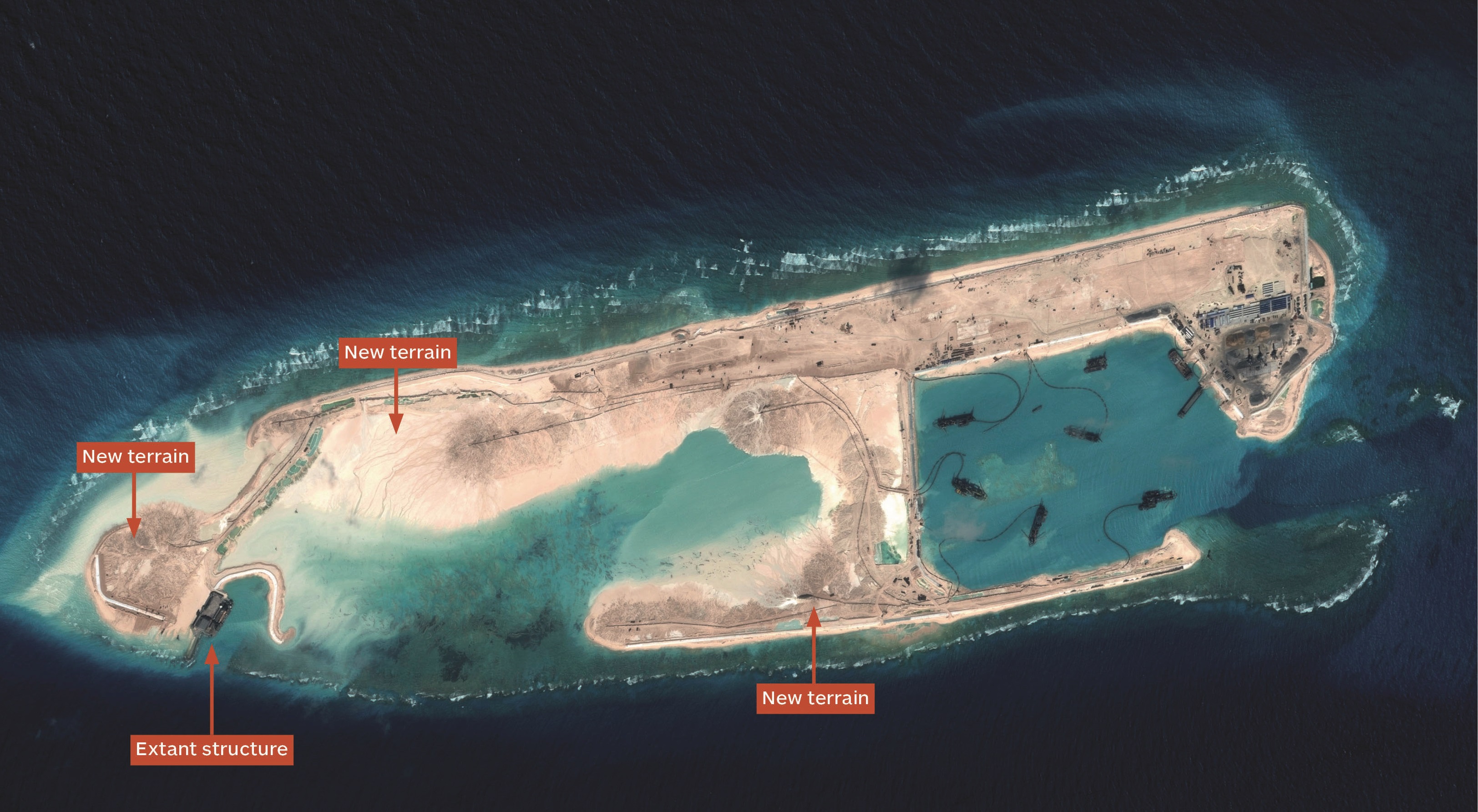 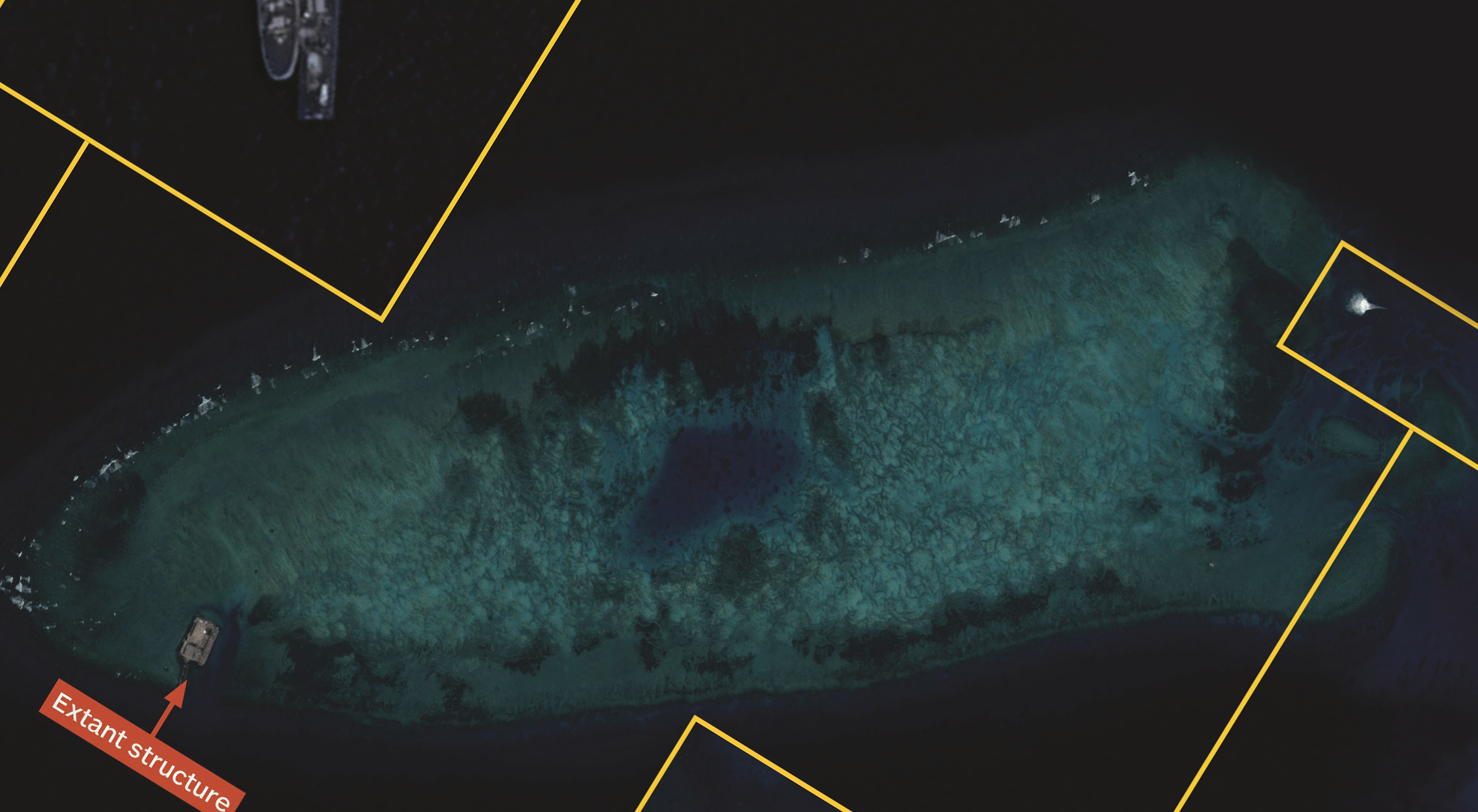 Subi Reef is one of these artificial islands. And on Monday, the Lassen sailed within 12 nautical miles of it. It was "the strongest assertion yet by the U.S. Navy that it rejects any maritime claims" generated by the sandcastles," the Diplomat's Ankit Panda writes.

Why the United States is getting involved

The United States doesn't formally take a position on South China Sea disputes. But there are lots of reasons America would challenge Chinese island-building claims.

The kind of operation the US launched on Monday, in which an American ship sails into contested waters to show that it doesn't accept a claim it considers unlawful, is called a "freedom of navigation" operation (FONOP). These are designed to demonstrate America's commitment to open global shipping and travel routes, a key pillar of American foreign and defense policy.

FONOPs aren't that rare; the US "has been conducting these operations regularly all over the world since 1979," three scholars at the Center for Strategic and International Studies write.

This specific FONOP was about showing China that the US will not tolerate it using its growing strength to threaten the principle of open sea lanes. "It is a practical demonstration that the United States will not accede to maritime claims that violate international law, and it places pressure on China’s leaders to give a legal rationale for their objections to the operation," the CSIS scholars write.

According to these experts, the move isn't just aimed at sending a message to Beijing — it's also about showing the region that the US is willing to stand up to Chinese aggression. "The majority of countries in the region are likely to welcome the U.S. decision to conduct FON operations around Chinese artificial islands," they explain. "The other claimants, non-claimants in maritime Southeast Asia, as well as nations outside the region, such as Japan and Australia, are increasingly concerned about China’s militarization of its islands."

This is about both reassuring America's traditional allies and building partnerships with other nations threatened by Chinese assertiveness. China's South China Sea claims have freaked out almost all of its weaker neighbors, creating an opportunity for the US to expand its influence with regional states. In the past year, the US and Vietnam (a longtime Chinese partner) have deepened naval cooperation through joint exercises — an obvious reaction to Chinese policy.

Where it goes next

This move was a long time coming: According to the CSIS experts, "the Obama administration was considering conducting [this kind of] operation for the past six months." The Monday FONOP represents the US's considered response to Chinese island building and general South China Sea assertiveness.

So far, China hasn't done much to challenge the American moves besides condemning it and moving naval assets nearby. No one is warning about any real risk of military conflict.

But this does represent a new US commitment to the South China Sea. The United States is clearly sending a message to Beijing that it is concerned about its island-building campaign and is more willing than ever to do something about it.