How California upended its war on drugs in 2014

Share All sharing options for: How California upended its war on drugs in 2014

The biggest blow to the US war on drugs in 2014 may have taken place not in the states that legalized marijuana on Election Day, but in California. On November 4, residents in the largest state in the country overwhelmingly voted — by a 19-point margin — to reduce nonviolent and non-serious drug and property crimes from felonies to misdemeanors.

Last year, Colorado and Washington state got a lot of attention when they became the first two states to allow retail sales of marijuana for recreational purposes. And voters in Alaska, Oregon, and Washington, DC, approved ballot initiatives that legalized marijuana to varying degrees.

But California's Proposition 47, which reduces almost all simple drug possession to a non-felony, may be even more important since it was enacted in the nation's most populous state. And it could have major implications for drug policy in the rest of the country, as other states consider trimming down their massive prison systems and see the kind of voter support Proposition 47 obtained.

Here's what Proposition 47 does, and why it's a big deal for criminal justice reform.

The onset of the modern war on drugs in the 1970s and 1980s bolstered the rapid criminalization of drugs across the US, turning illicit drug possession into a serious crime with mandatory minimum prison sentences.

For decades, California led the charge with its own "tough-on-crime" policies. But Proposition 47 upends many of those laws by reducing nonviolent and non-serious drug and property crimes from felonies to misdemeanors. The measure makes it so cocaine, heroin, meth, and nearly all other forms of drug possession without intent to sell — as well as the theft of up to $950 in property — still carry criminal penalties, but they'll be reduced to lower fines and less incarceration time.

"A misdemeanor conviction is still a significant, detrimental thing for people to have happen in their lives," said Allen Hopper, criminal justice and drug policy director at the ACLU of Northern California. "But a felony conviction has lifelong consequences." Among those consequences, Hopper cited a much harder time getting work.

California's measure works retroactively, allowing people currently in prison for these crimes to apply for resentencing. This should allow up to one in five of California's current prisoners to get out early, according to the Los Angeles Times. As of December 31, the state had released nearly 1,000 prisoners as a result of Proposition 47, the San Diego Union-Tribune reported.

There's one big exception: offenders with a previous conviction for a violent crime, such as murder or rape, could still face felony charges for low-level drug and property offenses, meaning Proposition 47 won't do much for violent criminals.

Mass incarceration is a huge issue in California — and the country 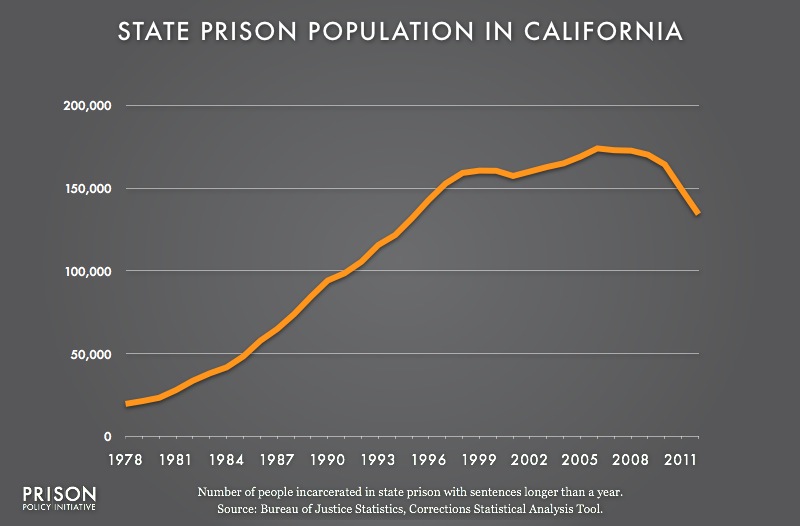 California, like the rest of the US, saw a massive increase in its prison population with the start of the modern war on drugs and the bipartisan "tough-on-crime" policies that followed.

But the state couldn't keep up with this massive increase, leading to a big overcrowding problem in California's prisons. As a result, the US Supreme Court in 2011 ruled that the state must reduce its prison population.

In recent years, California, other states, and the federal government have attempted to address mass incarceration through reforms that shifted incarceration to the local level, reduced sentences on low-level crimes, and allowed low-level offenders to get out of prison earlier under special circumstances.

But Proposition 47 goes even further than many other reforms by downgrading the classification attached to so many non-serious crimes — not just the sentence.

Proposition 47 also tries a softer approach by reallocating the savings

Proposition 47 will save the state an estimated $150 million to $250 million a year, according to the San Francisco Chronicle.

But instead of letting the state pocket these savings, the initiative requires the state government to put the money into a fund that will finance schools, mental health treatment, truancy and dropout prevention, and victim compensation programs.

"We don't stop at trying to reduce the prison population," said Lenore Anderson, chair of the Proposition 47 campaign. "We also capture the money and put the money into what we call smarter justice: prevention and treatment."

The idea, supporters say, is to shift the criminal justice system from being reactive to being more preventive, so it helps stop crimes before they even happen.

"What we really need to get to is a reconceptualization of what the criminal justice system is," Hopper, of the ACLU of Northern California, said. "The goal of the system ought to be figuring out the best way to make it least likely that folks are going to commit new, additional crimes once they're released."

Even advocates characterize Proposition 47 as a start, acknowledging that much bigger reforms will be necessary in the future for California — and the rest of the country — to reduce prison populations to pre-1980s levels.

"I don't want to understate the significance of Proposition 47. It's hugely significant," Hopper said. "But yes, it is also incremental in the sense that we have a long way to go."

One problem is that Proposition 47, like other state and federal reforms, focuses on low-level drug and property offenses, not violent crimes. But most prisoners are violent offenders. Brian Elderbroom and Ryan King of the Urban Institute's Justice Policy Center noted in a blog post that this is increasingly the case in California.

While it's politically trickier to reduce prison sentences for violent criminals, there's evidence that many sentences may be longer than necessary to reduce crime. The research suggests that people age out of crime, so letting them out of prison 10 or 20 years down the line — instead of 30 or 40 years, or never — might not pose a significant threat to public safety.

"Crime is a young man's endeavor," Elderbroom said in an interview. "It's not surprising that someone who commits a crime at a young age would be a completely different person by the time they're in their 30s."

One area of particular interest for reformers is the rapid increase in the use of life sentences since the 1980s, which critics view as excessive and ineffective at reducing crime.

"Not only do we send more people to prison," said Marc Mauer, executive director of the advocacy group Sentencing Project, "but we keep them there longer."

Experts say that reducing these sentences would help bring America's falling incarceration rate more in line with the country's dropping crime rate. Federal statistics show violent crime fell by about 27 percent between 2000 and 2013, but the incarceration rate fell by roughly 1 percent during the same time period.

The policies behind mass incarceration were intended to deter new crimes and to literally incapacitate criminals by putting them in cells where they couldn't commit new offenses.

"Incarceration did contribute to some of the declines in crime over the past two decades, but it's a marginal effect," Elderbroom, of the Urban Institute, said. "We're long past the point of getting those types of benefits from incarceration with the level of imprisonment we have today."