The head of the country's largest police union would like to see federal hate crime laws expanded to protect police officers.

Chuck Canterbury, national president of the Fraternal Order of Police, would like to see police officers protected as well.

"Congress saw a need to expand the law to protect a group of our fellow citizens who we suspected were being targeted as victims of violence," Canterbury said in a statement. "In the last few years, ambush attacks aimed to kill or injure law enforcement officers have risen dramatically. Nineteen percent of the fatalities by firearm suffered by law enforcement in 2014 were ambush attacks."

"Enough is enough!" he said. "It's time for Congress to do something to protect the men and women who protect us."

Federal hate crime laws currently apply to criminalized acts of violence when a perpetrator is motivated by "actual or perceived religion, national origin, gender, sexual orientation, gender identity, or disability." If someone is found guilty of a hate crime, he or she can face punishments on top of what the act of violence in question typically entails.

Canterbury argues that the extra protections are necessary for cops due to a supposed increase in "ambush attacks."

The National Law Enforcement Officers Memorial Fund reported that police fatalities in 2014 totaled 126, up from 102 in 2013 but still near historic lows. Annual firearms deaths in particular are down to 53 in the 2010s, compared to 127 in the 1970s. 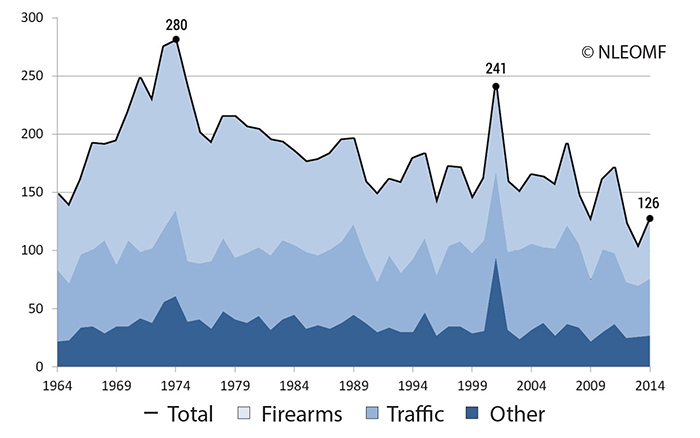 This coincides with a dramatic drop in crime in recent decades. Violent crime rates in the US dropped by roughly 48 percent between 1994 and 2013, according to FBI data.

But police organizations around the country have increasingly amped up their defensive rhetoric following the December murder of two New York City police officers and in response to protests against racial disparities in police use of force and the criminal justice system. Many New York City police officers are even refusing to do their jobs in protest of Mayor Bill de Blasio, who recently acknowledged that he taught his biracial son to be careful around police simply because of his race.