2015 will be a make-or-break year for Bitcoin

Share All sharing options for: 2015 will be a make-or-break year for Bitcoin

2014 was a bad year for people who own bitcoins, with the cryptocurrency losing nearly 60 percent of its value. And 2015 is off to an even worse start. We're less than a week into the new year, and the value of one bitcoin has already fallen about 15 percent, from $320 to around $270:

It's a mistake to read too much into short-term fluctuations in Bitcoin's value. As bad as the last year has been, the currency has been in worse shape before. It fell more than 90 percent between June and November of 2011, for example. Still, Bitcoin's continued slide is reason to ask hard questions about the network's long-term future.

In the past, fluctuations in Bitcoin's value were largely driven by media attention, which in turn drove a speculative boom. People became convinced that the Bitcoin network would be big and important in the future, and so they bought bitcoins in hopes of cashing in on that expected future growth.

But that kind of speculative cycle can't drive the Bitcoin economy forever. Sooner or later, the Bitcoin community is going to have to find applications that appeal to ordinary people — like making everyday purchases or sending money around the globe

2015 will be a crucial test for the alternative payment network. If Bitcoin does as poorly in 2015 as it did in 2014, a lot more people could question whether the technology really has a bright future.

Bitcoin is a hit with investors but not users

Venture capitalists have been pouring a lot of money into Bitcoin-based startups. Coindesk has a useful list of these investments, which includes startups that help people acquire and spend bitcoins, help businesses accept them, and help people make money from "mining," the process of reconciling Bitcoin transactions and earning rewards in the process. According to Coindesk, Bitcoin startups raised just $2 million in 2012. The figure rose to $94 million in 2013 and to a whopping $314 million in 2014.

With so much money being spent on new Bitcoin products and services, you might expect to see a rapid increase in Bitcoin usage. But the data suggests that so far, none of these startups has caught on with consumers in a big way: 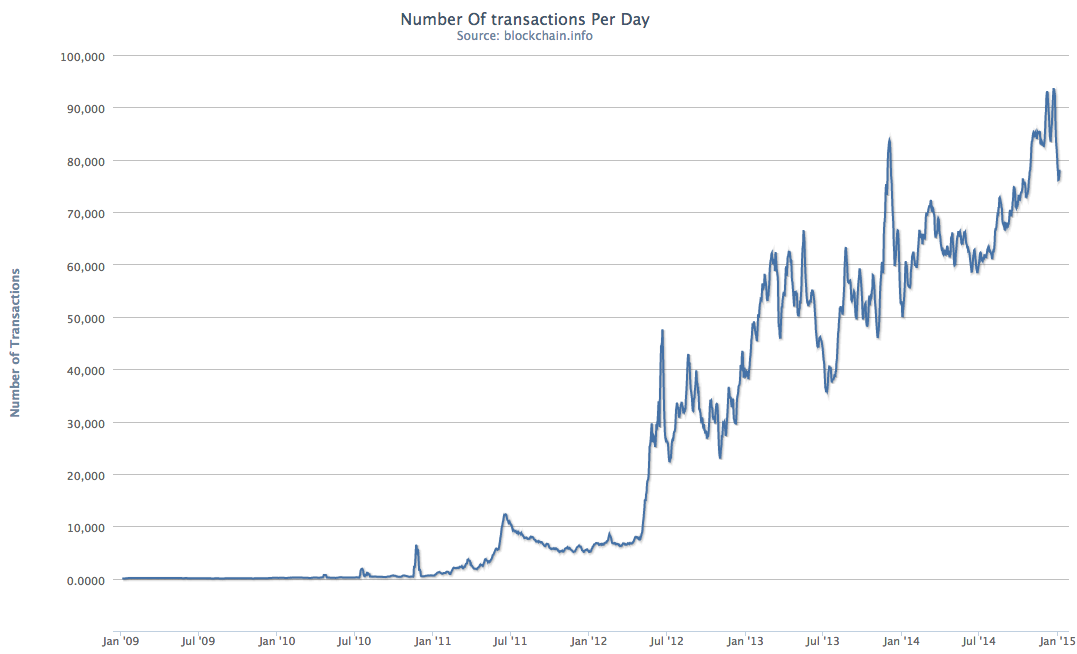 Between January 2013 and today, the amount of money invested in Bitcoin startups has grown more than 100-fold. Even after 2014's declines, Bitcoins today are worth 20 times what they were worth at the start of 2013. The number of Bitcoin ATMs has gone from 0 to 342. Yet during the same two-year period, the number of Bitcoin transactions each day has not even doubled.

In short, there's a lot of excitement among Bitcoin hackers, Bitcoin investors, and other insiders. But normal people are hardly using the network at all.

For example, when I asked a friend who's heavily involved in Bitcoin which startups he's most excited about, he mentioned Blockstream, a startup that's seeking to improve the core Bitcoin architecture to help make it more compatible with other Bitcoin competitors. That could prove to be a valuable effort, but only if Bitcoin itself proves to have useful applications. And my friend had trouble naming a Bitcoin application that would appeal to mainstream audiences.

Why 2015 is a make-or-break year for Bitcoin

Of course, some Bitcoin startup investments were only made a few months ago. Perhaps startups are about to unleash amazing innovations in the coming months that will prove the doubters wrong.

I'm still cautiously optimistic that this will happen. I've long suspected that Bitcoin's first "killer app" will be international money transfers, and the growing number of Bitcoin ATMs around the world could be a step toward making that happen. But people have to actually start using those ATMs. And the numbers suggest that — at least so far — they're not.

If Bitcoin exhibits the same kind of anemic growth in 2015 it did in 2014, despite exponentially more investment, that could be a sign that the technology isn't as revolutionary as optimists (including me) thought. The Bitcoin network itself is in no danger of dying — the core infrastructure will survive for years even if most people lose interest in it.

But network technologies like Bitcoin are depend a lot on momentum. People invest in them because they expect them to grow rapidly. Another year of anemic growth could cause a lot of people to invest their time and resources elsewhere.

And if Bitcoin startups invest hundreds of millions of dollars over several years and fail to develop any user-friendly applications, that might be a strong sign that the technology doesn't actually have any such applications.