Scientists broadly agree that genetically modified foods are safe to eat. Much of the public does not.

That's one takeaway from this new Pew poll, which surveyed both the public and scientists with the American Association for the Advancement of Science (AAAS) on a wide variety of topics. Here's the GMO split:

For the record, the scientists' view is supported by multiple scientific panels that have investigated this issue and found that, yes, GMOs are safe to eat. But much of the public doesn't seem to be on board with these findings — two-thirds of respondents thought that scientists "do not have a clear understanding" of the health effects.

So what's going on here? One plausible explanation is that most people just don't know much about GMOs and aren't aware of what scientists think about them. Indeed, an earlier 2013 survey of Americans found that 54 percent of people knew little or nothing about genetically modified foods, while 25 percent said they'd never even heard of them.

There's also a fraction of people who have heard of GMOs — but don't trust the scientific majority here. Anti-GMO activists have been fairly successful at raising doubts about genetic engineering. And GMOs are often associated with large, unpopular corporations.

That all said, GMOs don't seem to be a pressing concern for most people, regardless of what the polls say. Americans eat GMOs every day without worrying too much about it — the vast majority of US corn is genetically modified, and more than 60 percent of processed foods in the grocery store contain GM ingredients. What's more, when voters in states like Colorado have considered initiatives to label GMOs, they've usually rejected them.

Why do scientists believe GMOs are safe to eat?

At this point, billions of people around the world have been eating GM foods for decades without any noticeable ill effects. And numerous scientific studies have concluded that the GM crops currently on the market pose no more of a health risk than conventional crops.

'The science is quite clear'

Here's what AAAS concluded in its 2012 statement: "The science is quite clear: crop improvement by the modern molecular techniques of biotechnology is safe." The European Commission agreed, after sifting through 25 years of research. So did the American Medical Association — although the latter is in favor of stricter pre-market safety testing.

The rough scientific argument goes like this: Traditional crop-breeding techniques have long altered the genes of plants and animals. That's a messy process. The risk of random mutations and unexpected outcomes has always been present. (To take one example, crop scientists often use radiation on seeds to induce mutations and improve the odds of getting desired traits.) Nevertheless, food produced by conventional breeding is broadly considered "safe." 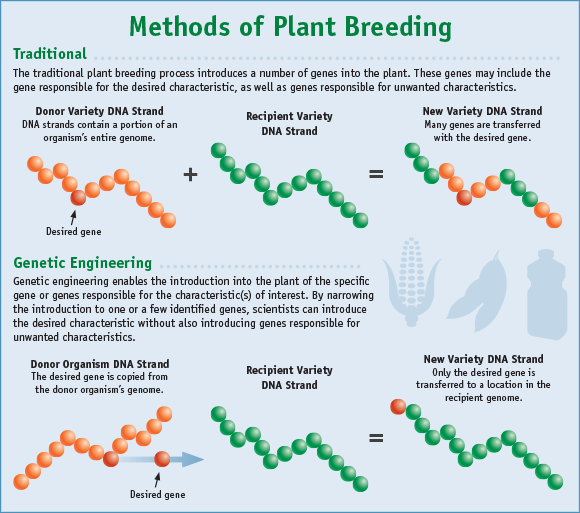 To be sure, this view isn't universal. A minority of scientists still insist that more research is needed before GM foods can be considered 100% safe. After all, genetic engineering isn't exactly like traditional breeding and it may have downstream effects scientists haven't fully studied. For instance, in a dissent to that AAAS statement above, 21 researchers argued that increased herbicide use — which can occur with crops engineered to be resistant to Roundup — might have health effects we don't yet know about.

But that's a minority view, and it's basically an argument that there may be unknown unknowns lurking out there. For now, there's no evidence that the GM foods on the market pose any special threat. Which is why so many scientists tend to think they're "generally safe" to eat.

By the way, do note that we're only talking about the health effects of eating GM foods — that's what the Pew poll is about. But there are, of course, separate questions about, say, the environmental impacts of GM crops (such as Roundup-Ready crops that are resistant to herbicide). That's a much more complicated question, and there's not the same broad consensus on the answer. Here's an introductory overview.

The GMO "split" is bigger than the split on other issues

There was one other noteworthy aspect of the Pew poll: curiously enough, the public and AAAS' scientists were further apart on GMO safety than they were on any other science-related question.

For example, on global warming, 87 percent of the AAAS scientists agreed that humans were the main cause, whereas only 50 percent of the public did. That's a fairly big split. But it still wasn't as big as the split on GMOs:

So what's going on here? On Twitter, Matthew Nisbet pointed out that AAAS scientists are more ideologically liberal than the public at large. That might explain some of the gaps above. But belief in the safety of GMOs isn't a notably liberal cause. The gap there really stands out — and might just be due to the fact that so few people have even heard of GMOs.

Meanwhile, some of the questions in the poll are rather odd. Why ask scientists about offshore drilling? There's not really a straightforward "scientific" answer to that.