Share All sharing options for: A record 125 people were exonerated of crimes in 2014. Here are 6 of their stories.

Cooperation with law enforcement helped increase the number of Americans absolved of previous criminal convictions to 125 in 2014 — a record high since the National Registry of Exonerations began tracking such cases in 1989. 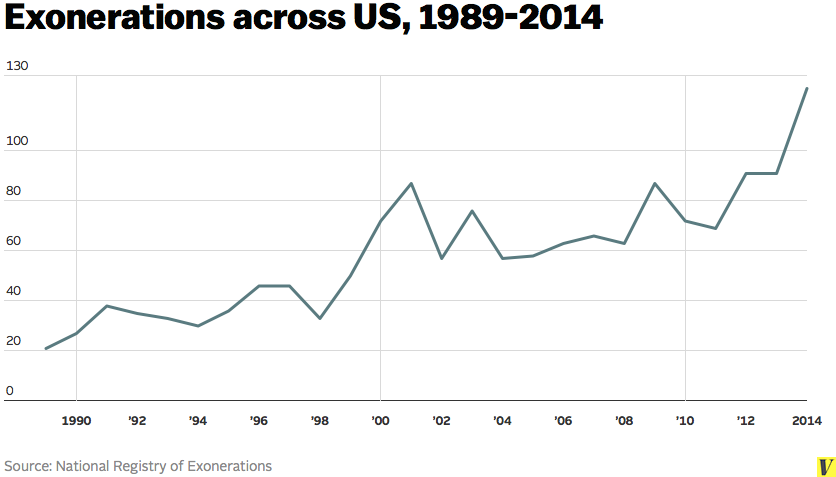 The registry's report, released Tuesday, linked the rise in exonerations to special investigative teams that examine convictions based on coerced confessions, false testimony, and other instances of bad evidence. These units were particularly active in Houston and Brooklyn, where 40 people were exonerated for crimes ranging from drug possession to murder.

"I think there is a seachange in the thinking related to the fallibility of the criminal justice system,'' University of Michigan law professor Samuel Gross, co-founder of the registry, told USA Today. "It turns out that [wrongful conviction] is a much more common problem than everybody realizes.''

Some other findings in the report:

Maurice Possley, senior researcher for the National Registry of Exonerations, said it's possible that the total 2014 numbers will increase in the future. And it's likely that some of the rise in exonerations since 1989 is due to the registry's increased ability to find such cases.

"We are the only project that attempts to find and tabulate these cases," Possley wrote in an email to Vox. "There is no obligation for anyone to report cases to us. For instance, when the registry issued its report for the year 2013, we reported there were 87 exonerations. We now know of 91 such cases."

Here are the stories of six of 2014's exonerated defendants, as outlined by the registry's report.

Nathan Jacobson pled guilty to money laundering in 2008, but he was exonerated in 2014.

Jacobson was scooped up during a federal investigation into a prescription drug selling scheme. His credit card processing company had handled the online credit transactions for Affpower, a Costa Rican firm allegedly involved in the plan.

Jacobson insisted he had no knowledge that Affpower's transactions were fraudulent. But his lawyer, who wasn't admitted to practice law in the US and described the American criminal justice system as "tyrannical," told Jacobson that pleading guilty was his only option to avoid a 100-year sentence.

Over the next few years, a new legal defense team tapped into other evidence from the investigation — including a recorded conversation with an Affpower official who had been secretly working with the prosecution — to get his case another look. A federal judge subsequently allowed Jacobson to withdraw his guilty plea, and the charges were dropped.

Daniel Larsen was convicted of possessing a concealed weapon in 1999, landing him in prison for 28 years to life because he had two prior convictions.

In 1998, a 911 caller reported seeing a man brandish a knife during a fight on a parking lot. Police responded to the scene and claimed they saw Larsen throw a knife under a car, even though Larsen didn't fit the description given by the 911 caller.

Several factors contributed to Larsen's faulty conviction. The cop who identified Larsen changed his testimony so a charge would stick. His trial lawyer, who was later disbarred, failed to investigate the case before trial, didn't produce witnesses who could have testified that Larsen didn't have a knife, and never sought a fingerprint analysis of the weapon.

In 2004, the California Innocence Project at California Western School of Law began working on Larsen's case. After a lengthy process in which an appeals court eventually ruled in Larsen's favor, the Los Angeles County District Attorney's Office dismissed the charge in 2014.

In 1995, 17-year-old Michelle Murphy was convicted of murdering her 15-week-old son. But she was exonerated in 2014 after DNA tests on blood at the scene revealed a profile that didn't match Murphy or the baby.

Murphy's initial conviction depended on a lot of faulty evidence. She falsely confessed to a detective who was also responsible for a false confession in another case. And a forensic analyst wrongly testified that blood type AB found at the scene couldn't rule out Murphy as the culprit, even though she is type A and her baby was type O.

The prosecution, after a push from the Innocence Project, dismissed the charges in 2014, but only after Murphy spent nearly 20 years in prison and her daughter was put up for adoption.

Ricky Jackson, Kwame Ajamu, and Wiley Bridgeman were convicted of murder, attempted murder, and robbery in 1975. But in 2014, the sole eyewitness came forward and admitted he had not seen the crime, leading to the three men's exoneration.

In 1975, two men attempted to rob a salesman as he left a grocery store. When the salesman resisted, the robbers fired two shots into his chest and another that hit the grocery store owner's wife.

The sole eyewitness in the case, 12-year-old Eddie Vernon, said he thought he was helping police do "the right thing" by telling them he saw the three men commit the robbery. Vernon claimed he tried to recant his statement prior to the trial, but police allegedly threatened to arrest his parents for perjury — since Vernon was too young to charge — and fed him details about what to say.

"I don't have any knowledge about what happened at the scene of the crime," Vernon said at a 2014 hearing. "Everything was a lie. They were all lies."