On Friday, the federal government announced a substantial change to a program that allows police to keep cash, cars and property without charging anyone with a crime. Initial reports were enthusiastic and exaggerated the scope of the change, suggesting Attorney General Eric Holder was preventing local and state cops from seizing property entirely. Now, activists are pushing back.

What the Department of Justice actually announced on Friday was a set of new restrictions on the federal Equitable Sharing Program, which transfers proceeds from seized property to the local and state police departments who made the seizure. The change may affect less than 15 percent of the revenue local and state police departments get from the federal program. While that could have a major impact on some of the worst abuses by police, it falls far short of ending the program altogether — and many of the exploits it enables.

The federal Equitable Sharing Program, expanded through the war on drugs in the 1980s, allows local and state police departments to seize private property allegedly used for criminal purposes, even without evidence of a crime, and share the proceeds with federal agencies. The idea behind the policy, known as "civil asset forfeiture," was to let police more easily take cash and drugs from drug traffickers to stop them from profiting from their criminal enterprises.

Critics of civil asset forfeitures say the federal program creates a profit incentive for police, since the seizures can be used by cops to fund their own departments. A previous Washington Post investigation found police routinely seized property without any evidence of wrongdoing. And police used the proceeds to buy things many critics view as excessive, the Post found — from armored cars and military weapons to $600 coffeemakers and party clowns.

Some advocates of reforming civil asset forfeiture say Attorney General Holder's order is a step forward. But they caution that the impact of the change is being exaggerated, mostly because activists and journalists are overlooking major exceptions in the reform.

Holder's order only curtails "adoptions" that are requested through the federal program by a local or state police department working on its own. It still allows local and state police to seize and keep assets when working with federal authorities on an investigation, and when the property is linked to public safety concerns — such as illegal firearms, ammunition, and explosives.

"At best," Thampy said, "this shifts the nature of the problem from one that's partially caused by runaway state and local law enforcement to one that's driven by federal agencies."

"The exceptions swallow the change"

One of the most well-known abuses of asset forfeiture occurs on highways, where police stop people just to search their cars for cash they can pocket. An anonymous Justice Department official told the Washington Post that Holder "believes that the new policy will eliminate any possibility that the adoption process might unintentionally incentivize unnecessary stops and seizures."

But Darpana Sheth, an attorney with the libertarian Institute for Justice, said the Drug Enforcement Administration already deputizes many local and state police officers into federal agents to crack down on highways deemed drug trafficking routes. If the DEA continues this practice, local and state police could avoid Holder's order entirely — since they'll be working as federal agents who are exempted.

"That's where a lot of the abuse is," Sheth said. "There's a lot of over-enforcement on the side of the highway in which the money is supposed to be flowing because there's that profit incentive: if they seize it, they can keep it." 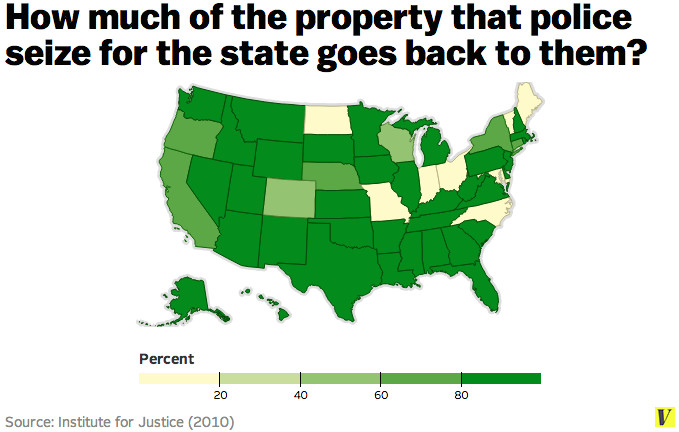 The change also doesn't limit federal agencies' ability to seize and keep assets in their own investigations. Those investigations can still lead to authorities seizing property without evidence of criminal wrongdoing.

Matt Lee in Michigan won back $2,400 taken by the local sheriff's department. But he had to sign a form releasing police of liability to get his money back. (Gabe Silverman / The Washington Post via Getty Images)

Activists say Holder's order leaves some questions unanswered and falls short of the reforms that are necessary.

It's unclear whether Holder's order will affect ongoing cases in which people are already trying to get their property back. And it's uncertain at this point how broad the public safety exemption will be.

"While [Holder's order] is certainly a step in the right direction, this is not a cure-all," Sheth of the Institute for Justice said. "Much more needs to be done."