Share All sharing options for: Maybe we should try not to kill every last thing in the oceans

About 20,000 years ago, North America was home to all sorts of fantastically massive land mammals. Saber-toothed cats. Hairless mammoths. Giant beavers the size of bears. Armored glyptodonts the size of Volkswagens. Three-ton sloths. 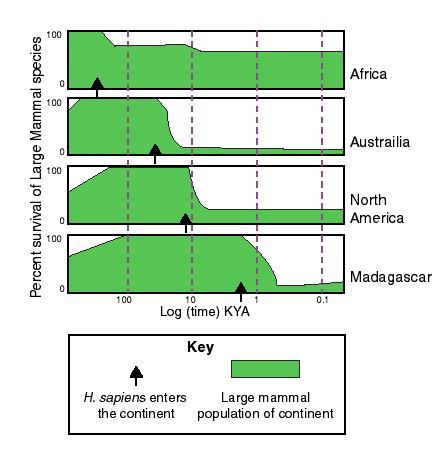 Then, quite suddenly, many of those large animals went extinct starting some 13,000 years ago, about the time humans crossed over from Siberia, bearing stone tools and spears. Scientists are still debating whether we actually hunted all those species to extinction — disease and a changing climate are other possible culprits. But the fossil record shows similar patterns elsewhere, in Australia or Madagascar (see chart). Wherever people went, megafauna soon vanished.

Later, as technology advanced, we found new ways to snuff out species. Passenger pigeons were once so plentiful in America that their migrations darkened the skies. But with guns, nets, and toxic fumes, hunters killed so many pigeons that, by 1914, their numbers had dropped from 3 billion to zero. 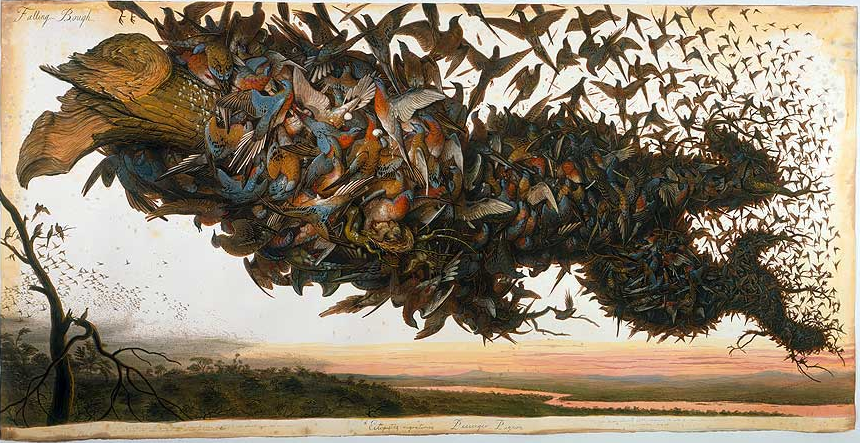 And hunting was only part of the story. As humans cleared more land for cities and farms, large-scale deforestation and habitat loss proved more efficient still at eradicating wildlife. Today, land-based species are disappearing at 1,000 to 10,000 times the normal background rate. Experts say we're on the verge of a sixth mass extinction event.

But now the oceans are threatened, too

For much of this history, however, there's been one huge exception to the wave of extinctions: the oceans.

Yes, humans have caught a lot of fish and hunted plenty of whales. But to date, humans have only wiped out about 15 marine species completely (like the slow-moving Steller's sea cow, eradicated by Europeans just 27 years after discovery). Mostly, the seas have stayed resilient.

Except the oceans may not be safe for long. A big, important 2015 paper in Science warns that even marine life now faces the risk of broad extinction. Humans are so drastically transforming the seas — through industrialized fishing, deep sea-mining, shipping, climate change — that we run the risk of doing to ocean fauna what we started doing on land 50,000 years ago:

Bad news. Yet the paper actually isn't as bleak as it first sounds. As the authors, led by Douglas McCauley of UC Santa Barbara found, we haven't yet destroyed the oceans irreparably. We're still early in the process, and there's certainly time to avoid broad species loss.

We can't go back and warn those early humans to save the mammoths. But we can try to avoid repeating that pattern in the seas.

How humans are radically reshaping the seas

Fishing is just the least of it. (Education Images/Universal Image Group/Getty Images)

The Science paper offers one of the most painstaking accounts yet of all the different changes we've wrought in the seas. Until very recently, humans mostly affected ocean life through commercial fishing and whaling. That could do a fair bit of damage — witness the collapse of cod in the Atlantic — but it was the equivalent of the early spears-and-mammoth stage on land.

Until recently, we were still in the spears-and-mammoth stage in the oceans

Over the last 50 years, however, that's changed. Fishing, for one, has become far more advanced. Fishermen now use satellites to hunt and deploy 700-foot bottom trawlers that scrape along the ocean floor to catch as much as possible.

And it's not just fishing. Everywhere you look, technology is reshaping the oceans: Coral reefs are disappearing, thanks to a combination of overfishing, dredging in tourist areas, pollution, and warmer waters due to global warming. More and more commercial ships are traversing the seas, ramming whales in their path. Nitrogen fertilizer from farms is pouring into bodies of water like the Gulf of Mexico, creating vast "dead zones" hostile to life.

Below is a chart of some of the less-appreciated ways we're transforming the seas. Mining companies now, for example, have contracts to exploit 463,000 square miles of seafloor, a recent trend that could disrupt deep-sea life in unpredictable ways:

The authors observe that these pressures are adding up — and all the warning signs for broad extinctions are there. From fish to sea turtles to seabirds, many marine populations are in serious decline or have seen their ranges severely curtailed. These patterns aren't quite as severe as they are for many mammals, birds, and butterflies on land, but they're getting there.

Some species may be unprepared for sharp changes in ocean temperature

What's more, climate change is likely to exacerbate these pressures in the decades ahead. As we load more carbon-dioxide into the atmosphere, that warms the planet — and heats up the seas. Some of that extra CO2 is also absorbed by the oceans, making the water more acidic.

The combination is potent. More acidic seawater can chew away at coral reefs or kill off oysters. And the change in temperature is pushing many fish toward the poles, often with unpredictable effects. (The invasive and destructive lionfish, for instance, has been working its way up the US East Coast.) Many species may be unprepared for such drastic shifts, especially when combined with overfishing, pollution, and other pressures.

How to avoid mass extinctions in the ocean

The encouraging news, McCauley and his co-authors note, is that doom is far from inevitable. "Humans," they write, "have demonstrated a powerful capacity to reverse some of the most severe impacts that we have had on ocean fauna — and many marine wildlife populations demonstrate immense potential for resilience." We're not just good at killing things. We're often quite effective at helping them recover.

Take, for instance, the sea otter. Back in the 1900s, this species — so crucial for keeping urchins in check and regulating coastal ecosystems — was thought extinct. But it was rediscovered in 1938 and, thanks to new protections, rebounded in the Eastern Pacific. The authors also point to the Enewetak and Bikini Atolls, which were devastated by US nuclear tests in the 1940s and 1950s. After the bombs stopped falling, the coral and reef fish have been recovering over the last 50 years.

What's more, conservationists have learned a lot from their mistakes in trying (often unsuccessfully) to protect land species. For example, setting aside large wildlife reserves hasn't always been enough — animals sometimes need things like wildlife corridors outside the protected zones, as well. These lessons were often learned too late on land. But "in the oceans," McCauley and his co-authors write, we are uniquely positioned to preemptively manage defaunation."

The wild card here is, as always, climate change. The authors note that global warming and ocean acidification could prove even tougher for sea creatures to adapt to than, say, dozens of nuclear bombs on one localized atoll. Cutting down on carbon-dioxide emissions is likely a crucial step to avoid broad damage. What's more, protected marine areas will need to adaptable — since species are likely to shift their range as waters warm.

"All of this is a tall order, but the oceans ... still contain a sufficient degree of resilient capacity so that the goal of reversing the current crisis of marine defaunation remains within reach," the authors conclude. "The next several decades will be those in which we choose the fate of the future of marine wildlife."

Carl Zimmer had an excellent piece in the New York Times on the Science study, noting that it's incredibly hard to get good data on the state of the oceans, which is what makes this paper a "remarkable synthesis." And here's a link to the study itself, which is paywalled but well worth reading if you can.

Some good news pieces: California blue whales, once nearly extinct, are back to historic levels. And here's how the US stopped its fisheries from collapsing.

Some bad news: Caribbean coral reefs could disappear "within a few decades." And the oceans are now acidifying at the fastest rate in 300 million years.