Monarch butterflies could be declared an endangered species. Here's what that means.

Share All sharing options for: Monarch butterflies could be declared an endangered species. Here's what that means.

Monarch butterflies are vanishing. Over the last 20 years, fewer and fewer of them have been making the long journey down to Mexico to survive the winter. By one count, their numbers have shrunk as much as 90 percent.

There are a few reasons for that: In Mexico, the butterflies' winter habitat has dwindled due to logging. And in the United States, where the monarchs breed in the summer, they're suffering from a decline of milkweed — the main food for monarch caterpillars before they turn into butterflies. Some recent research has suggested that the rise of herbicide-intensive farming in the Midwest is killing off vital milkweed.

The situation has gotten so dire that the federal government may soon step in. Earlier this week, the US Fish & Wildlife Service announced it would conduct a year-long review on whether to list the monarch butterflies as "endangered" or "threatened" under the Endangered Species Act.

If that actually happens, it could mean sweeping new protections for the butterflies — say, new guidelines for farms in the Midwest to protect milkweed plants. So here's a guide to why the butterflies are vanishing, and what an endangered species listing might entail:

What happened to all the monarch butterflies? 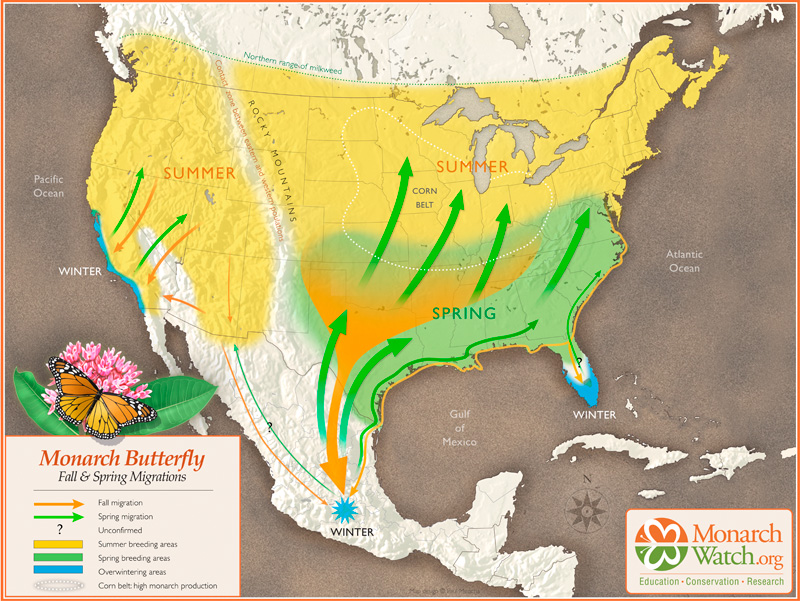 Every spring, millions of monarchs fly up from Mexico to Texas, laying eggs on milkweed plants as they go. That spring generation will, in turn, produce two successive summer generations that gradually make their way up to Canada.

The monarch population has fallen as much as 90%

Then, in the fall, that third generation of monarchs will fly thousands of miles back down to the Oyamel fir forests in central Mexico to survive the winter. It's a remarkable — and utterly grueling — journey.

But over the past 20 years, scientists have noticed that fewer and fewer monarchs are making it down to Mexico each winter. They can tell this by measuring the areas of the Oyamel forest with trees that contain butterflies. (The monarchs only go to a few locations in Mexico, so counting is feasible.) That area keeps shrinking, which means the butterfly population is shrinking too:

Last year, I interviewed Lincoln Brower, a biologist at Sweet Briar College, about the decline. He pointed to a few factors: In Mexico, forest habitats have dwindled due to logging (although recent conservation measures have helped slow this trend). Harsh weather can also disrupt the annual migrations.

Most important, though, was the decline of milkweed plants in the United States — the main source of food for monarch caterpillars during the summer. One recent study found that milkweed has declined 21 percent between 1995 and 2013, mainly in agricultural areas in the Midwest. (The rest of the decline was on conservation lands or in public areas such as the medians of highways.) The study's authors, from the University of Guelph, speculated that this may be due to heavy herbicide spraying on farms.

And the outlook was bleak: the authors suggested that monarch populations could decline another 14 percent if milkweed loss continues apace.

Does this mean the butterflies are endangered?

That's the key question. In August 2014, conservation groups petitioned the US Fish & Wildlife Service to consider protections for the monarch butterfly under the Endangered Species Act.

These reviews don't happen often in response to petitions

Then, on December 29, 2014, the US Fish & Wildlife Service announced it would conduct a year-long "status review." The agency will now collect data on monarch population trends, genetics, habitats, and existing conservation measures — all with an eye to determining how badly the butterflies' habitat is imperiled.

Tierra Curry of the Center for Biological Diversity (one of the groups that petitioned the agency in August) says these reviews don't happen often, so this is a big deal. "It's an acknowledgment of how dire the situation is," she said.

Once the review is completed, the agency has three options: 1) It can decide that the butterflies are fine and say that endangered-species protections are "unwarranted." 2) It can list the monarch as a "threatened" or "endangered" species under the Endangered Species Act. 3) Or it can put the butterfly on a waiting list for protection (known as "warranted but precluded" — say, if the agency agrees that the monarchs are in trouble but lacks resources to act).

What happens if the monarch gets protected?

A Monarch butterfly on Red Tropical Milkweed at the Grapevine Botanical Gardens on October 19, 2008. (TexasEagle/Flickr)

If the monarch butterfly does get listed as threatened or endangered, any activity that gets federal funding or permitting and potentially harms monarch habitats would have to consult with the Fish & Wildlife Service to minimize the damage.

The agency could develop new guidance for protecting milkweed

Agriculture might be most heavily affected. The agency could, for instance, develop new guidance for farmers in the Midwest on how to protect milkweed, says Curry. (The guidance would likely exempt a lot of routine farming activities.)

"With a lot of endangered species, it's difficult to address the causes," Curry says. "But that's not true of the monarch. We basically just need more milkweed."

Some experts have suggested that farms could preserve milkweed if they avoided herbicide spraying around the edges of fields, for instance. "Don't spray along 100 feet along the edge of everyone's field, so that there's some native habitat left," Brower told me. But it's still not clear exactly what actions the agency might suggest.

Are GMOs responsible for the monarch's decline? 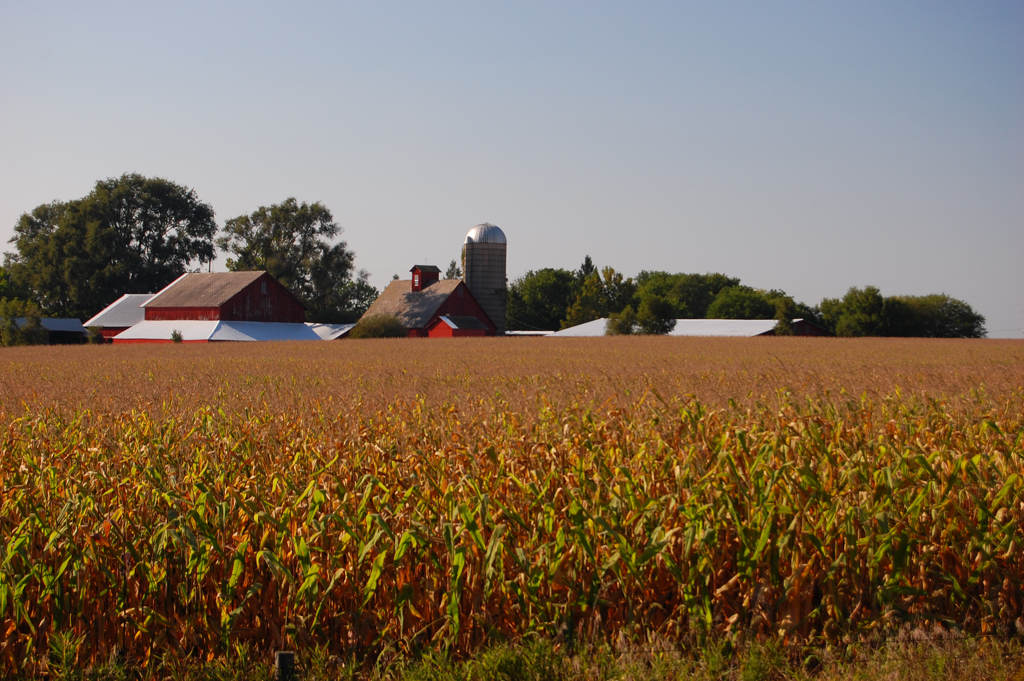 Corn farm in the afternoon sunlight, by the side of the Wauponsee Glacial Trail. Flickr/Eric Allix Rogers

In recent years, some experts have blamed the decline of the monarch butterflies on the rise of new soy and corn crops that are genetically modified to be resistant to herbicides — such as Monsanto's Roundup. The idea is that this leads to heavier herbicide use, which in turn kills more milkweed.

But not everyone's convinced that herbicides are the sole reason for the decline of native plants near agricultural fields. Another recent study by scientists at the US Department of Agriculture and Penn State found that herbicide-tolerant native plants around farmland in Pennsylvania were declining at the same rate as less-tolerant plants. That suggests that other factors may be at work here.

The Penn State researchers pointed out that farmers have made a lot of changes in recent decades apart from rising herbicide use — they've simplified their crop rotations, segregated crops and livestock, and employed new mechanical farming methods. What's more, woodlots, hedgerows, pastures, and wetlands have all been cleared to make way for bigger fields. So there may be more going on than just GMOs and herbicides.

(For more on this question, see this post by the University of Wyoming's Andrew Kniss, who agrees that herbicides have played a role in milkweed's decline, but is cautious about calling it the sole factor.)

In either case, there's broad agreement that milkweed plants are declining sharply throughout the Midwest. And that appears to be a major reason monarch butterflies are vanishing. Figuring out exactly why those plants are declining — and how best to protect them — is a crucial next step.

Are there other ways to protect monarchs?

Some groups, like Monarch Watch, have encouraged people to plant more milkweed in their gardens and on other public and private lands. And Brower suggested in our interview that state highway departments could be more careful about mowing and spraying their highway medians (which often contain plenty of milkweed), particularly during the butterfly breeding season.

But these actions can only do so much. The University of Guelph study suggested that just 26 percent of milkweed loss since 1995 had occurred in public areas or parks. By contrast, 70 percent of the loss had occurred in "agricultural-intensive landscapes" — particularly in the south and central United States. So figuring out how to preserve undeveloped grasslands and bringing back milkweed plants seems to be the main task here.

If nothing is done, however, Brower has warned that the butterfly could face a gloomy fate. "If the monarch goes extinct," he told me, "it's just like going into a museum and pulling a rare painting off the wall and destroying it."

Further reading: Here's my more in-depth interview with Lincoln Brower about the decline of the monarch butterflies.