Marijuana legalization could be heading to Vermont next

Share All sharing options for: Marijuana legalization could be heading to Vermont next

Vermont's legislature is taking initial steps to consider marijuana legalization in the state.

Voters in four states have approved ballot initiatives to legalize the possession and sales of marijuana for recreational purposes. But up to this point no state legislature has stepped in to legalize marijuana without direct voter approval.

Vermont's legislature is the first to seriously consider legalization on Friday as it hears a presentation for an expansive, 218-page report put together by the RAND Corporation. The report doesn't make a specific recommendation for legislators, instead attempting to fairly present the pros and cons of the policy debate.

The report lays out what we know about marijuana legalization

The report emphasizes that marijuana legalization is not a binary decision between prohibition and the privatization and commercialization of sales. States could legalize possession but not sales, allow home growing but not sales, or legalize sales but only allow them in state-run pot shops, among other possibilities.

The four states that have voted to legalize sales up to this point — Alaska, Colorado, Oregon, and Washington — are placing sales in the hands of for-profit businesses. But these businesses have financial incentives to sell to the people most likely to overuse and abuse the drug, potentially putting them at odds with public health goals to minimize problematic drug use.

One study of Colorado's pot market, conducted by the Marijuana Policy Group for the Colorado Department of Revenue, found the top 29.9 percent heaviest pot users in the state made up 87.1 percent of demand for the drug. For the marijuana industry, that makes the heaviest users the most lucrative customers.

The states that haven't legalized marijuana prohibit the drug's sales. But this creates a black market for pot, which, based on previous studies from the Mexican Institute of Competitiveness and RAND Corporation, makes up roughly 20 to 30 percent of violent drug cartels' revenue.

The report argues that creating a state-run monopoly for marijuana sales could help eliminate the black market and produce the best public health outcomes, since regulators could directly control prices and who buys pot. Previous research found that states that did this with alcohol kept prices higher, reduced access to youth, and reduced overall levels of use.

But state-run monopolies come with a major catch: since pot remains illegal at the federal level, the state would in effect break federal law if it sold marijuana.

The report found marijuana legalization could raise $20 million to $75 million in new revenue each year from sales to Vermont residents, or roughly 1.4 to 5.2 percent of the state's general budget. But annual revenue could rise to the hundreds of millions if neighboring states don't legalize marijuana, turning Vermont into a hub for tourists looking to buy legal pot. 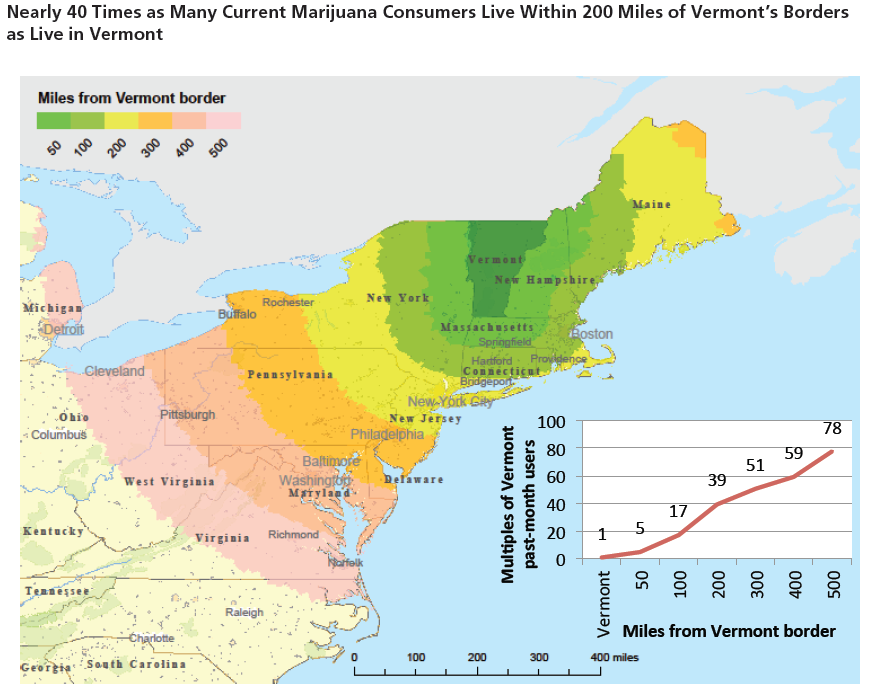 The report repeatedly notes that many questions remain about legalization. How legalization will affect rates of use remains unclear. And numerous studies have found that marijuana use correlates with various bad outcomes, but it's not clear whether the adverse outcomes are actually caused by pot.

Whatever approach the state takes, the report cautions that so little is known about the full effects of marijuana legalization that lawmakers should be ready and willing to adjust to any sudden or unexpected problems.

It's too early to know how Vermont lawmakers will act

The RAND researchers will present the report to Vermont lawmakers on Friday, which could kick off a long legislative process should the state decide to legalize pot.

It's far too early in the process to gauge whether the legislature will approve marijuana legalization. But Gov. Peter Shumlin previously said he's not opposed to it, although he would like to see more data from Colorado and Washington, the first two states to legalize, before Vermont follows through.

"Our conversation about whether to legalize marijuana must be rooted in facts and be transparent about the uncertainties. This RAND report will serve as a critical foundation for our ongoing discussion about the best course for Vermont," Shumlin said in a statement. "I continue to support moves to legalize marijuana in Vermont but have always said that we have to proceed with rigorous research and preparation before deciding whether to act. This report will help us do that."