An ocean mystery: How high did sea levels rise in the 20th century?

Share All sharing options for: An ocean mystery: How high did sea levels rise in the 20th century?

The acceleration of sea-level rise since the 1990s may have been a much bigger deal than anyone realized.

That's the upshot of an interesting new study in Nature, which argues that past research had overestimated the pace of global sea-level rise between 1900 and 1990 by about 30 percent.

That would mean that the period of rising sea levels since 1990 — which have been well-studied and tracked by satellites — represents an even bigger departure from the past than once believed. (Both this study and previous ones agree that sea levels are now rising about 3 millimeters per year, or 1.2 inches per decade, a pace likely to keep accelerating with global warming.)

"It suggests that, in the last two decades, we've seen a much more pronounced shift from the past," says Carling Hay, a post-doctoral fellow at Harvard who led the Nature study.

But just as significantly, if the new study holds up, it could help solve a long-standing mystery about why observations of sea level rise haven't matched up with modeling efforts. Below is an overview of that mystery — and how this new study fits in.

Why scientists have disagreed about past sea-level rise

Sea-level rise is one of the more dramatic effects of global warming. As land ice on Antarctica and Greenland melts, and as ocean water heats up and expands, sea levels will encroach on coastal cities, causing trillions of dollars in damage. Climate scientists have predicted that sea levels could rise 1 meter (3.3 feet) or more by 2100 if carbon emissions keep rising at their current rate.

But there's long been some disagreement among researchers about exactly how fast sea levels actually rose over the 20th century century — a notable gap in understanding. The chart below, via RealClimate, compares the new Nature study (Hay et al 2014, in yellow), with six previous studies:

They all agree on the big picture, but there's a surprising amount of variation there. So why is that?

One problem is that the historical record is imperfect. Over the last century, sea levels have been tracked by tidal gauges — basically measuring sticks bobbing up and down along the coast. Those work well, except that many areas didn't have tidal gauges for much of the 20th century, particularly in the Southern Hemisphere:

Another flaw: While tidal gauges can give you a clear picture of what sea levels are doing along the coasts, that's not always the full story. For example, winds can push water around in the oceans (without affecting overall sea levels). So if sea levels are rising due to global warming but winds are pushing water away from the coasts in places where there are tidal gauges, those gauges won't capture what's going on.

Scientists have used various techniques to reconstruct past sea levels

Scientists have tried to fill in these gaps by doing a variety of reconstructions. For example: Since the 1990s, satellites have given a very accurate picture of sea-level rise — as well as the relationship between overall sea levels and tidal gauges at individual locations. So researchers can take that data, apply it to the historical tidal-gauge record, and get a rough picture of what global sea-levels were doing in the past. This isn't perfect, since things like wind patterns may have been different in the past, but it's reasonable enough.

Researchers have done a bunch of different reconstructions like these and concluded that sea levels rose roughly 1.6 to 1.9 millimeters per year between 1900 and 1990.

A big mystery: Why do models and observations disagree?

A bulldozer is used to push sand from a discharge pipe into place during a federally funded shore protection project by Great Lakes Dredge and Dock on May 17, 2013 in Fort Pierce, Florida. (Joe Raedle/Getty Images)

But this estimate created a new dilemma. At the same time, other scientists were creating models of the Earth's climate, feeding in all the things they know might have affected sea-level rise over that period. For instance: We know Antarctica and Greenland lost a certain amount of ice. We know the Earth got warmer so the waters expanded a certain amount. And so on.

In the past, models haven't perfectly matched observations of sea-level rise

But when they did all that, the models suggested that sea levels only rose 1 to 1.2 millimeters per year over that time frame. That's a pretty big significant discrepancy between models and observations. So many scientists assumed they were missing some factor. Maybe they'd overlooked some melting ice somewhere.

This latest study in Nature takes a very different approach to resolving the discrepancy. As Hay told me, the researchers first modeled the various processes that are known to affect sea levels — the receding of the last Ice Age, changes in ocean currents, ocean-atmosphere interactions, changes in land ice. Each of these processes create telltale patterns in the ocean. They then used statistical techniques to look for those patterns in the historical tidal-gauge record to infer information about global sea-level rises.

When they did that, they concluded that global sea levels had actually risen just 1.1 millimeters per year between 1900 and 1990 — roughly what those models had been saying. What's more, when the researchers applied their method to records after 1990, they got similar results to what satellites showed: sea levels have been rising about 3 millimeters per year (give or take 0.7 mm) between 1993 and 2010.

So what's the point of this new study?

On the one hand, Hay's Nature study is a neat bit of detective work — though further research will need to be done to determine whether her team's interpretation of the past is the correct one. Over at Real Climate, sea-level rise expert Stefan Rahmstorf hails this study as "important," but notes that different sea-level reconstructions have their strengths and weaknesses.

More broadly, this study doesn't greatly change the big picture. Satellites now show that sea levels are rising about 3 millimeters per year. And all studies agree that this current pace of sea-level rise is faster than the rise in the 20th century. Researchers might disagree on how big of an acceleration it is, but they agree it's accelerating. And they agree that it will accelerate in the future if the Earth keeps warming, though there's a range of views on how big that rise will be: 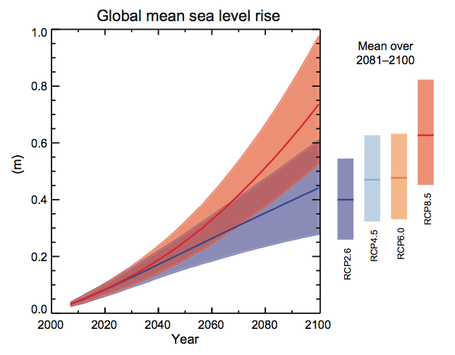 Hay's study might, however, affect some of those projections for future sea-level rise. Here's how:

There are two different ways that climate scientists try to predict future sea-level rise (for a given rise in emissions). On the one hand, there are "process-based" models that try to capture all the various physical phenomena that can cause ocean levels to creep upward (such as shrinking ice sheets in Greenland and Antarctica, groundwater pumping, the expansion of water due to extra heat). The downside to this approach is that some of these processes, like ice, are hard to model.

Alternatively, there are "semi-empirical" models, which basically look at the historical relationship between sea-level rise and temperature and try to project that forward.  These models tend to predict an even higher rate of sea-level rise in the future, although the IPCC has said it has trouble assessing their validity. Any change in the historical record could affect these semi-empirical models (though Hay, for her part, didn't want to speculate on how exactly projects might change — if at all).

That said, while more precise projections will be handy, we don't necessarily need to wait for scientists to figure out every last detail here. We know that sea levels are rising — and will continue to rise as the planet heats up. The big questions now are whether we'll cut emissions enough to slow that rise down, and how we'll prepare.

Further reading: Should we try to fight rising sea levels — or abandon the coasts?