Remember the Ebola epidemic? It's still not over.

Share All sharing options for: Remember the Ebola epidemic? It's still not over.

Exactly a year ago, health-care officials first confirmed terrifying news: there was an outbreak of Ebola in West Africa. And Franklin Umenze, a doctor living in Nigeria, knew he wanted to help.

By July, when a Liberian-American boarded a plane in Liberia bound for Lagos and collapsed on arrival from Ebola, Umenze was hard at work, volunteering in one of the hospitals that stopped the spread of the deadly virus through Africa's biggest metropolis.

When his work in Nigeria was done, the 29-year-old headed to Liberia to volunteer. By early March this year, the outbreak there seemed under control. "The last Ebola patient has been discharged," Umenze wrote in an email. "Children are back at school and life is gradually returning to normal."

Then just a few days later, on March 20, came a setback. Liberia confirmed a new case. The news was devastating: the country had been on day 27 of a 42-day countdown that would allow it to declare itself virus-free. But now the clock had to be turned back again.

"I hope we would contain this single case," Umenze wrote.

Today, we're one year into the biggest Ebola epidemic ever, mainly concentrated in West Africa. Despite the unprecedented scale of the global response and a renewed push to get a drug or vaccine to market, the epidemic in West Africa is not over.

There have been more than 24,000 cases and 10,000 deaths in nine countries; that's six times the combined death toll of every previous Ebola outbreak in history. Economies and health systems have been devastated. The epidemic has also outlasted every prior outbreak, leaving observers to wonder when the human-to-human chain of transmission will end.

In the most recent accounting of cases, the World Health Organization confirmed 150 new patients in West Africa. While it's nowhere near the thousands West Africa faced last fall, getting to zero will require more than pouring dollars and doctors into the region — it'll involve changing beliefs and behaviors in the furthest corners of West Africa, and revamping health systems ill-equipped to deal with epidemics.

The three most-affected countries have different patterns of transmission

Guinea, Sierra Leone, and Liberia still have very distinct epidemiological trends, and they are all uniquely worrisome. Overall, their ever-changing epidemiological patterns mean that while viral spread has been contained in some regions, it remains stubbornly persistent in others. This matters for one reason: the three countries share porous border regions, so even a single case in one country is a threat to all three.

In Guinea, where the outbreak started, new cases continue to be identified. In the latest reporting period for the week prior to March 15, officials found 95 new Ebola cases — the highest weekly total in the country in 2015, according to the WHO.

Ebola experts there are worried about an increasing number of cases around the Guinean capital Conakry. "We’re hoping that Conakry won't become a larger epidemic as we've seen in Freetown [Sierra Leone] and Monrovia [Liberia]," said Dr. Jordan Tappero, one of the Ebola leads at the Centers for Disease Control and Prevention.

Conakry is on the edge of Guinea, near a porous border with Sierra Leone. "Though transmission is currently confined to a relatively narrow geographic corridor," a recent WHO report said of Guinea, "the population is highly mobile, with a great deal of movement throughout surrounding districts and countries."

Liberia saw a massive increase in its caseload in August (around 300 new cases per week) and then a big drop-off around October. It's now the country where the epidemic appears to be most under control.

"When we put all the Ebola treatment units we wanted to put up [in Liberia], it turned out there were more empty wards, and people didn’t need the 1,700 beds we originally planned on," said Dr. Daniel Bausch, associate professor at the Tulane University School of Public Health and Tropical Medicine, who is working with the WHO on the outbreak.

But the country recently had a setback: after getting more than halfway through the 42-day period that would allow them to declare the outbreak over, they confirmed a new case. It's not yet clear whether this single person spread the virus to others, but it signaled that the end of the outbreak in Liberia may be further off than some had hoped.

Things are much worse in Sierra Leone, where the outbreak continues to smolder. Sierra Leone uncovered 55 new Ebola patients, according to the most recent WHO situation report.

"While Liberia has excellent Ebola treatment centers, that's still not the case in Sierra Leone," said Dr. Aleksandra Leligdowicz, who worked with Oxford University on an Ebola vaccine trial in Monrovia.

"The speed of the response in Liberia had been much quicker. The belief now is that Sierra Leone has been lagging behind in treatment centers, the training of health professionals, and funding from the international community."

It's also true that key public health messages still aren't getting through. Ebola aid worker Ishmeal Alfred Charles has been going house-to-house delivering Ebola sanitation information in Sierra Leone. There, the emphasis in public-health messages has shifted in recent months.

"Initially, we used to talk about not eating animals like monkeys, bats. Now we know a lot of people are still hiding, trying to bury their loved ones, wash the corpses. The key messages we are trying to tell them are: you don't have to touch the corpse, don't wash the corpse, keep the corpse in an isolated place," he said.

When someone dies from Ebola, the virus overtakes the body, so the corpse is very infectious. This is why safe burial practices — those that don't involve washing and touching corpses — are key to stopping transmission. But this requires behavioral and cultural changes that are happening very slowly, said Charles, particularly because people believe that if they don't properly bury their loved ones, they may be haunted by unsettled spirits.

The same resistance to safe burial practices has been recorded in some areas of Guinea and is one of the key reasons for the persistence of the disease in that country, said the CDC's Dr. Tappero.

No one knows when this epidemic will end 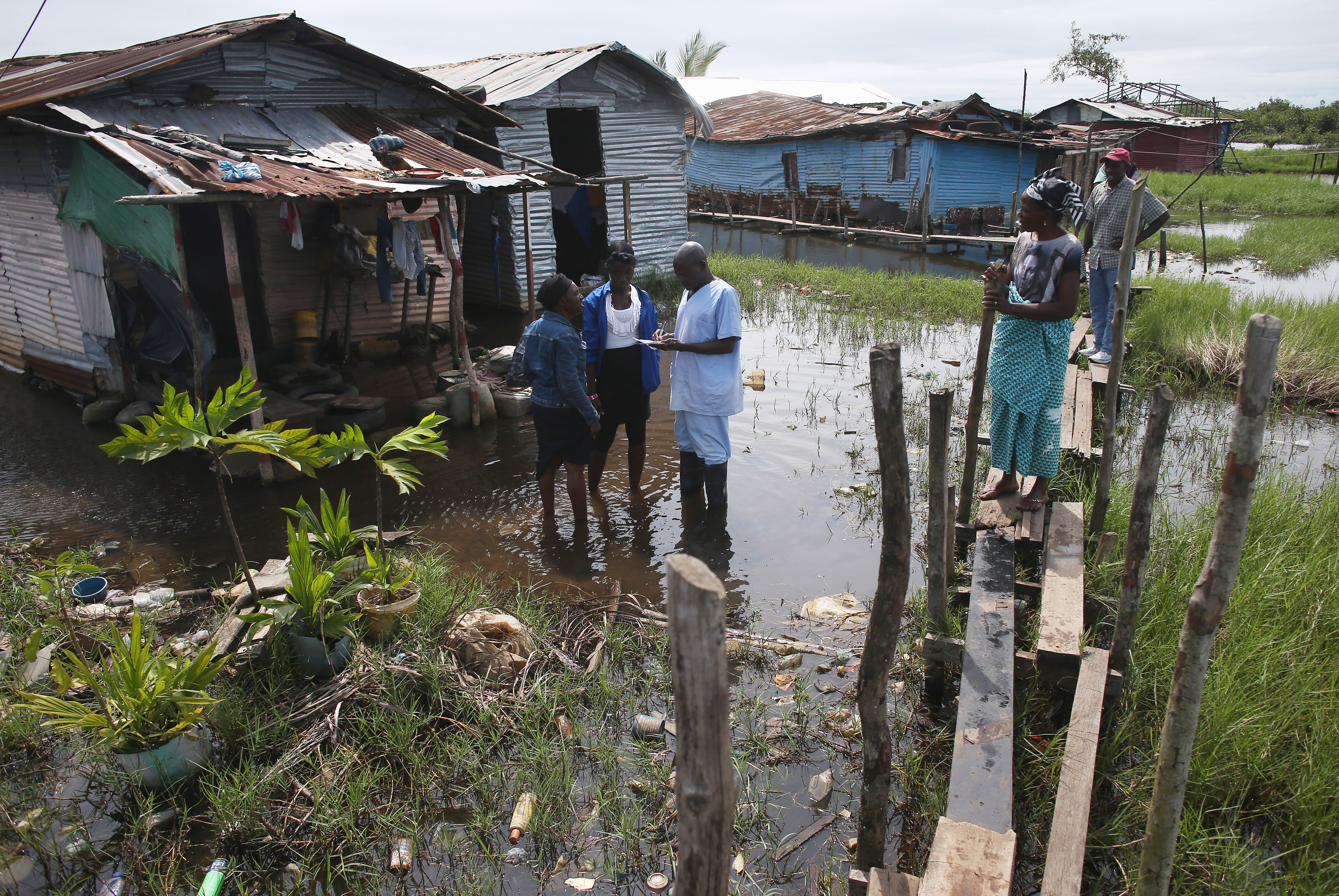 A Liberian health worker interviews family members of a woman suspected of dying of the Ebola virus inside. (John Moore/Getty Images)

Not a single expert could augur the end of this Ebola epidemic, though they all agreed it should be mostly under control by the end of 2015 — with several important caveats.

The first one: again, the relief effort needs to hit difficult-to-reach communities.

"The vast majority of previous epidemics occurred in rural areas," Dr. Tappero said. This is why cases that pop up outside of the capitals are so worrying. This crisis started in a rainforest region in Guinea, which happens to be at the nexus of the other two countries with intense transmission: Liberia and Sierra Leone.

After trying several periods of lockdown to bring the epidemic under control, the president of Sierra Leone just announced a new campaign called "Zero Ebola" that will involve several more: for three days at the end of March, and on three consecutive Saturdays in April, the country will grind to a halt, according to CNN.

"The campaign will provide an opportunity for communities to be directly involved in the drive to zero cases, to reflect and to pray for the eradication of this disease from our country," President Ernest Bai Koroma said in a statement. So while the country has come a long way, it's still resorting to extreme measures to stop the outbreak.

Indeed, every Ebola observer agreed that the threat of Ebola erupting again is real.

Another caveat: no one really knows how bad the epidemic is, and new data could take the world by surprise.

This means the numbers aren't always reliable, changes in the caseloads may or may not be real, and people like Fisman wouldn't be surprised if the current trends change as more data emerges.

We need stronger health systems to respond to pandemics

The most devastating death toll in West Africa probably won't be from Ebola itself, but from damage to fragile health systems and local economies.

Ebola has stretched the already weak health systems of Guinea, Liberia and Sierra Leone to the breaking point. Many of the few hospitals in these West African countries have closed because of Ebola. Doctors and nurses have died, or have walked off the job out of fear, so people with non-Ebola health needs — childhood vaccines, broken arms, maternity check-ins, HIV/AIDS testing or treatment — are not getting the care they would normally.

In a new study in the journal Science, researchers focused on measles — the most contagious virus recorded — and applied statistical models to quantify the likelihood of an epidemic in the three countries worst hit by the virus.

The researchers found that due to the health-system disruptions over 18 months, there could be up to 100,000 additional measles cases and between 2,000 and 16,000 additional deaths.

The impact of Ebola-related health-care disruptions on measles risk. (Courtesy of the journal Science)

This is an accounting of just one disease.

Beyond the lack of preparedness in individual countries, there's also the problem of the uncoordinated global response to outbreaks that we saw play out during Ebola. It took eight months for the WHO to declare the crisis a public health emergency, and newly revealed internal emails suggest that much of the delay was due to political maneuvering.

Following a grim assessment of the Ebola outbreak response released by MSF today, the NGO's general director, Christopher Stokes, warned, "The Ebola outbreak has often been described as a perfect storm: a cross-border epidemic in countries with weak public health systems that had never seen Ebola before."

He continued: "Yet this is too convenient an explanation. For the Ebola outbreak to spiral this far out of control required many institutions to fail. And they did, with tragic and avoidable consequences."

In an article in the New England Journal of Medicine on lessons for the next epidemic, Bill Gates suggested the world treat disease threats like wars, with a well-funded and empowered global agency and teams of health workers at the ready to jump to action whenever a crisis erupts.

"It's useful to compare our preparations for epidemics with our preparations for war," he wrote. "Defense budgets and investment in new weapons dwarf investments in epidemic preparation. NATO has a mobile unit that is ready to deploy quickly. Although it's not a perfect system, they do joint exercises where they work out basic logistics like how fuel and food will be provided, what language they will speak, what radio frequencies will be used. When soldiers sign up to serve, they know what the risks are and who will take care of them if they're injured or killed. Few if any of these things exist for an epidemic response."