8 things to know about the new iPhones

Share All sharing options for: 8 things to know about the new iPhones

Today is a big day for Apple fans, as the company introduces a shiny, new iPhone. Actually, Apple is introducing two new iPhones: a regular iPhone 6 and a new, larger iPhone 6 Plus. The new smartphones will go on sale September 19.

Here's eight things to know about the phones:

1) These are the biggest, thinnest iPhones ever

The original iPhone in 2007 had a screen that was 3.5 inches, measured diagonally. Apple maintained that size for several years — the iPhone 3G, 3GS, 4, and 4S were all the same size and shape. In 2012, Apple released the iPhone 5, which had the same width but was a bit taller, bringing the phone's screen up to 4 inches. The iPhone 5S was the same size as the iPhone 5.

The iPhone 6 represents the biggest screen size boost in iPhone history. The larger size means more pixels for apps to work with. The iPhone 5 line had a 640 by 1136 screen resolution. The new phones boost that to 750 by 1334 and 1080 by 1920, respectively.

At the same time, these are going to be the thinnest iPhones ever: they'll be 6.9mm and 7.1mm, respectively, compared to 7.6mm for the iPhone 5S.

2) Apple is playing catch-up to the Android world

While Apple stayed the same size, other screens were growing. Right now, one of the best-selling Android smartphones is Samsung's Galaxy S5. It has a 5.1-inch screen with a 1080 by 1920 resolution. 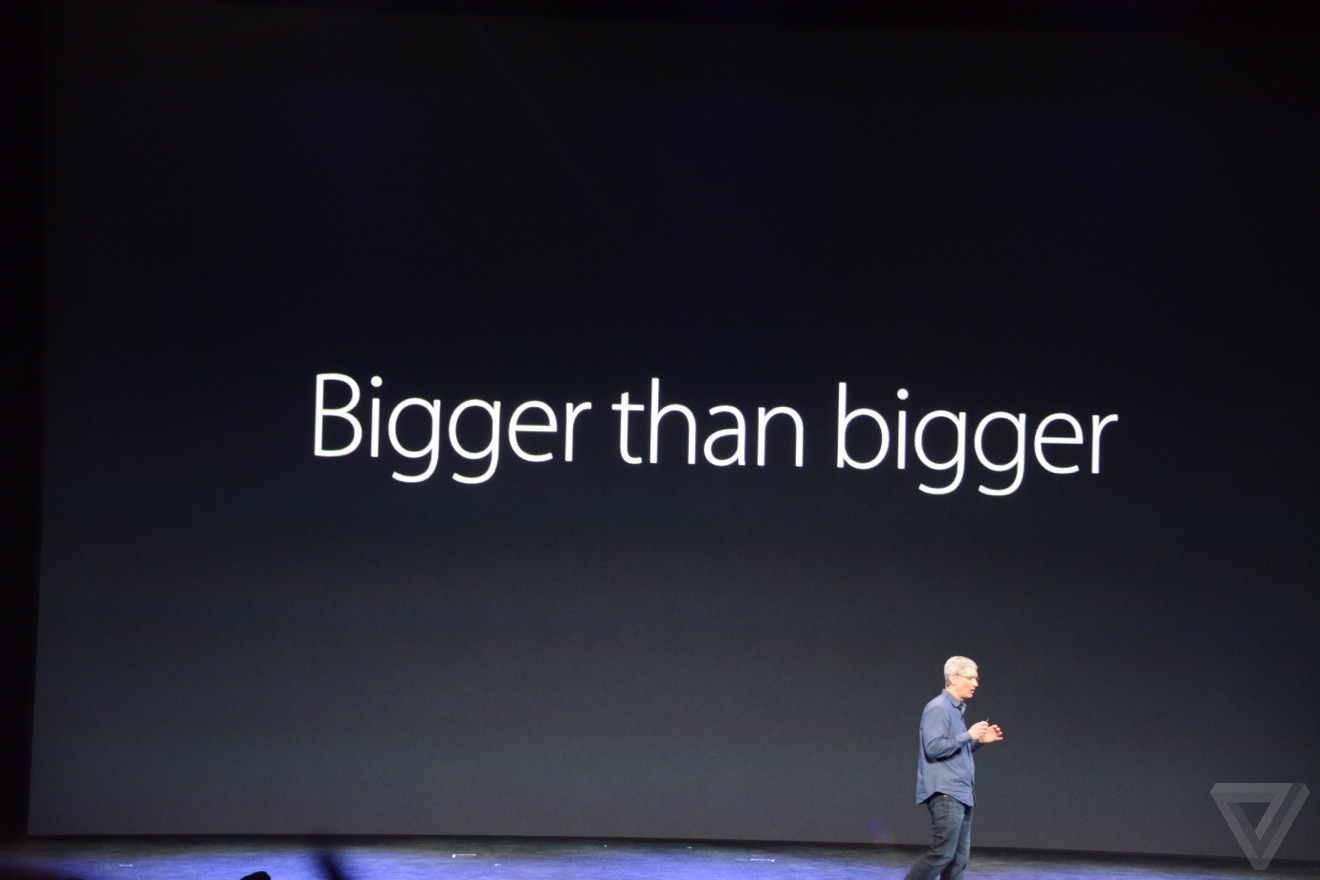 The Apple announcement. (The Verge)

The S5 has an even larger cousin, the Galaxy Note, with a 5.7-inch display at the same 1080 by 1920 resolution. These devices that straddle the line between phones and tablets have been dubbed "phablets" by the tech press.

And, while these might be the biggest iPhones ever, they're still smaller than the largest Android phones. And the smaller iPhone 6 still has fewer pixels than leading Android competitors.

Apple is aping the Android world in another way: as phones have gotten bigger, some Android device makers have moved the power button from the top of the phone to the right-hand side. Apple is doing the same thing with the iPhone 6.

4) They'll cost about the same as the old ones did

As per its usual practice, Apple is going to continue selling old models at a reduce price. The iPhone 5S will sell for $99, while an iPhone 5C will be free with contract. 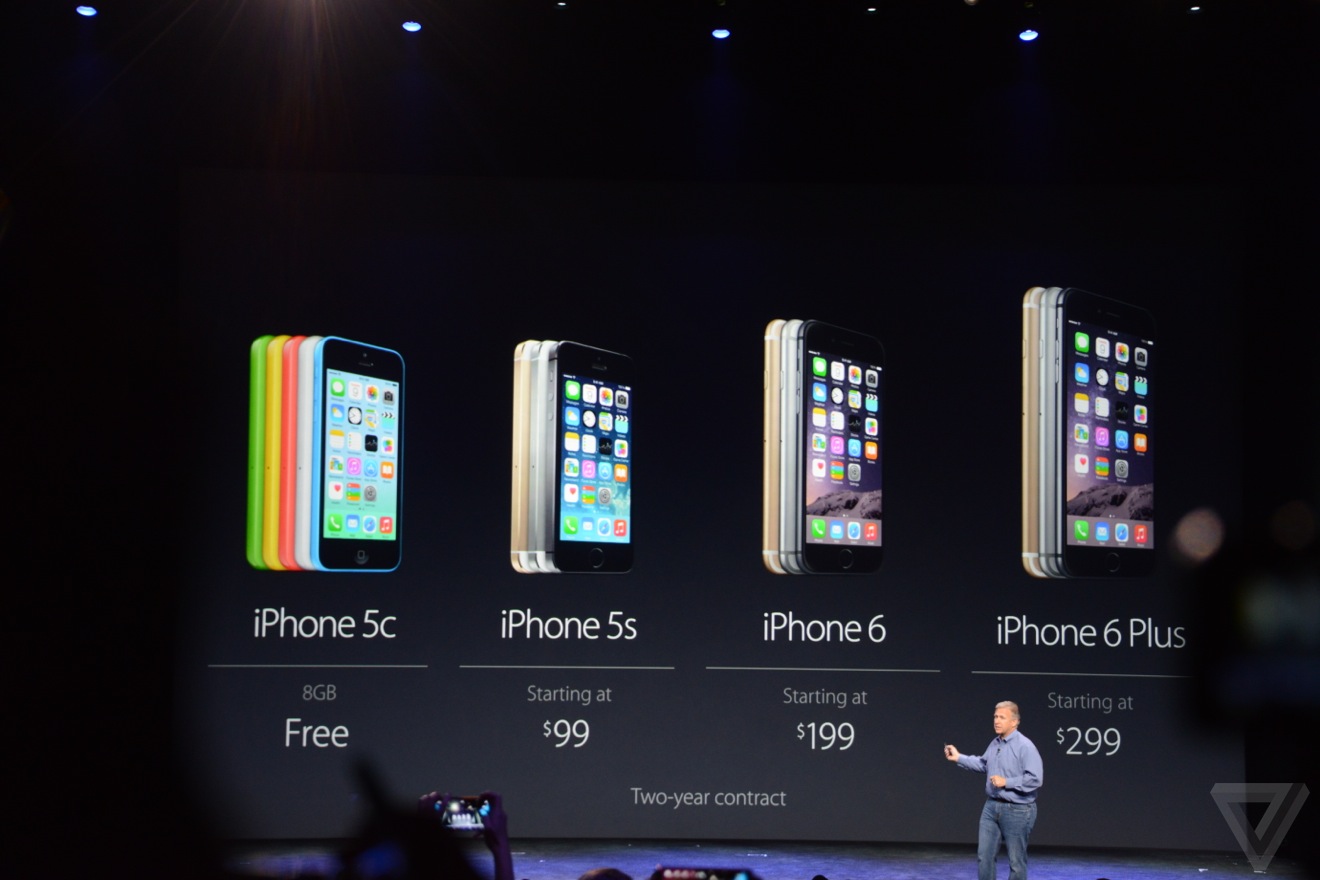 The camera on the iPhone 6 will sport several improvements over its predecessor.

The iPhone 6 (and 6 Plus) sports a new sensor that allows the camera auto-focus twice as fast as previous iPhones. So if you whip your phone out for a quick snapshot, you're less likely to wind up with a blurry snapshot.

The new iPhones also support a new slow-motion video feature. You can take videos at 240 frames per second and then slow them down to see them at a fraction of their original speed.

The new phones also supports "burst selfies." With this feature, you can take a bunch of photos in sequence, then flip through them to select the one you like the best.

Near-field communications, or NFC, is a technology that allows devices to swap data just by tapping them together. The technology is hardly new — it's been available on some Android phones since 2010 — but so far, it hasn't gotten much use. Apple is hoping to change that with a new mobile payments feature.

Rather than reinvent the underlying architecture of a payment system, Apple is partnering with major bank and credit card companies to build something that will piggyback on existing credit card infrastructure. You can either use the credit card information you already have on file with your iTunes account, or else add some new ones. Then you'll wave your phone (rather than swipe a card) at your retailer, and payment will be sent via Apple who will then bill your credit card.

At the presentation, Eddy Cue heavily emphasized the idea that with this transaction the cashier doesn't get your credit card number and Apple doesn't get your purchase information — it's all handled through a one-time payment number and a "dynamic security code" so your privacy is protected. This is presumably a differentiator from other major tech companies such as Google, Facebook, and Amazon all of which are heavily involved in harvesting user information as a core element of their business strategy.

There are two ways that iPhones communicate with the broader world wirelessly. One is wifi, the short-range networking standard that allows us to communicate with our home or business networks. The other is using longer-range cellular networks.

Over time, we've seen several major improvements to the iPhone's networking capabilities. For example, the iPhone 3G was called that because it was the first iPhone to support faster 3G networks. More recently, iPhone have upgraded to still faster 4G-networking standards, sometimes called LTE. 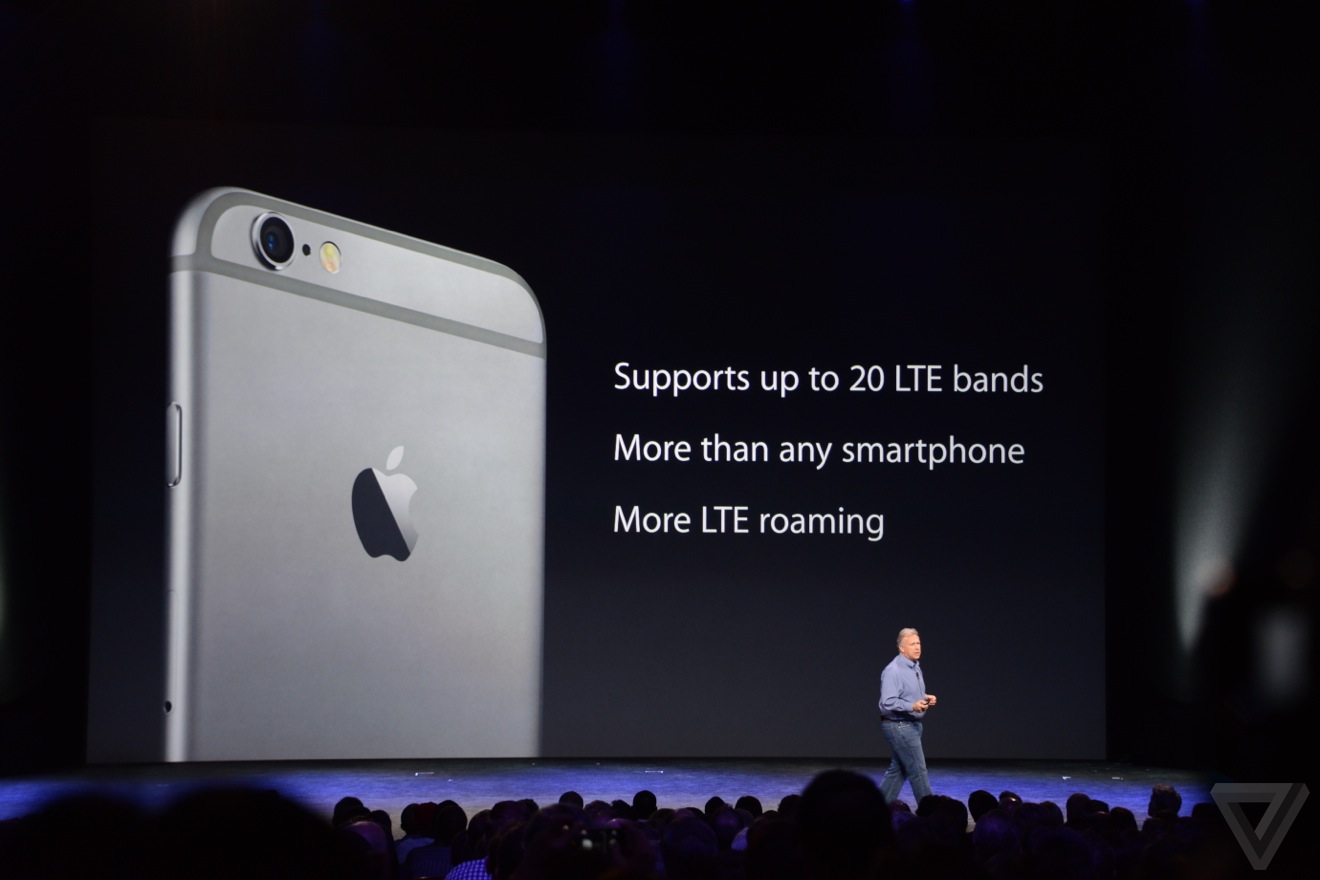 The iPhone 6 and its larger sibling make a couple of significant improvements over the networking capabilities of previous Apple smartphones. First, it supports more frequencies than previous iPhones — 20 different frequency bands in all. That will allow it to operate in more countries. Second, it uses a technique called carrier aggregation to allow it to utilize multiple frequency bands at the same time, which Apple says can lead to speeds of up to 150 Mbps, 50 percent faster than the iPhone 5S.

The wifi also got a significant upgrade. The iPhone 6 supports the latest wifi standard, known as 802.11ac, which offers speeds up to three times faster than the wifi chips on the iPhone 5S. The new iPhones will also have the capability to automatically re-route phone calls over a wifi network if cellular service quality is poor.

8) The iPhone 6 will run iOS 8, a new version of Apple's mobile operating system

Back in June, at Apple's annual World Wide Developer Conference, the company unveiled iOS 8, the latest version of the software that runs on iPhones and iPads. It will be released on September 17, in time to be pre-loaded on the new iPhones. The update has several major features:

Seamless integration of Mac and iPhone: Our digital lives are increasingly fragmented across multiple devices. We might be using the PC in the den one minute and an iPad in the kitchen the next. iOS 8 allows applications to "hand off" interactions from one device to another as users move from device to device.

Better onscreen keyboards: A new technology called QuickType attempts to guess which word the user will type next and allow her to select it with one tap. iOS 8 also supports third-party keyboards.

Storage in the cloud: In the past, Apple's iCloud has allowed consumers to synchronize their music, calendars, and other personal data between their Macs, iPhones, and other devices. But now Apple is competing directly with Google Drive and Dropbox by introducing iCloud Drive, a service that will allow users to save any kind of file on one machine and have it automatically synchronize on their other devices.