In 2007, Australia did something unusual: it began offering free HPV vaccines to adolescents in school.

That one decision has had a huge effect: doctors now report treating 61 percent fewer cases of genital warts, which are caused by HPV, in the age group that received free treatment, according to a new study published in PLOS One.

Australia's immunization program was originally promoted to prevent cervical cancer. A preliminary study found the program appears to be reducing cancer rates, but health experts and researchers suggested the program also led to a massive drop in the rates in treated genital warts cases.

In the new study, researchers looked at a nationally representative database of Australian general medical practitioners to see the exact effects of the policy on the country as a whole.

The results: a plunge in genital warts cases among younger women, with less pronounced drops among older women. 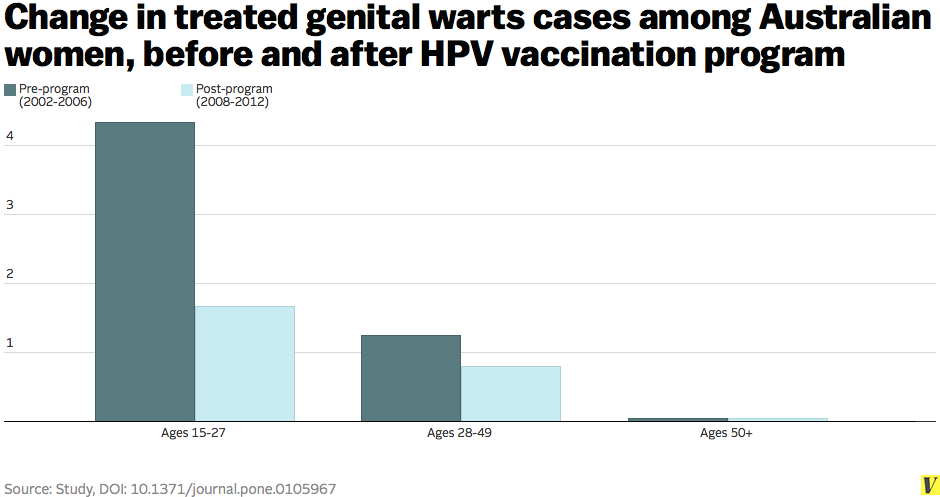 The researchers didn't find similar drops among men, who weren't offered free vaccines until 2013, after the study period. (It's possible there was a drop among men who have sex with women, but the study didn't control for patients' sexual partners.)

The study has big implications for some Australians' overall health and medical costs. And as other places look to expand their own vaccination programs, Australia's success could also set the tone for the rest of the world.

"Due to this reduction, some young women in Australia have been spared the distress of having genital warts and the health system spared the cost of having to treat them," the study concluded. "While this study did not find a significant decrease in genital warts among male patients attending general practice, it provides a baseline prior to the roll out of a similar scheme for boys."

To learn more about vaccines, read the full explainer and watch the two-minute video below: