25 years ago, President Bush escalated the war on drugs. Here are the results.

Share All sharing options for: 25 years ago, President Bush escalated the war on drugs. Here are the results.

On September 5, 1989, in his first televised national address as president, George H.W. Bush called drugs "the greatest domestic threat facing our nation today," held up a bag of seized crack cocaine, and vowed to escalate funding for the war on drugs. He later approved, among other drug-related policies, the 1033 program (then known as the 1208 program) that equipped local and state police with military-grade equipment for anti-drug operations.

Twenty-five years later, the increased efforts don't seem to have affected illicit drug use across the country.

New data from the National Survey on Drug Use and Health, released September 4, shows illicit drug use is actually up compared to one decade ago. (The federal survey underwent major methodological changes in 2002, so it's difficult to compare trends for all Americans prior to that year.) 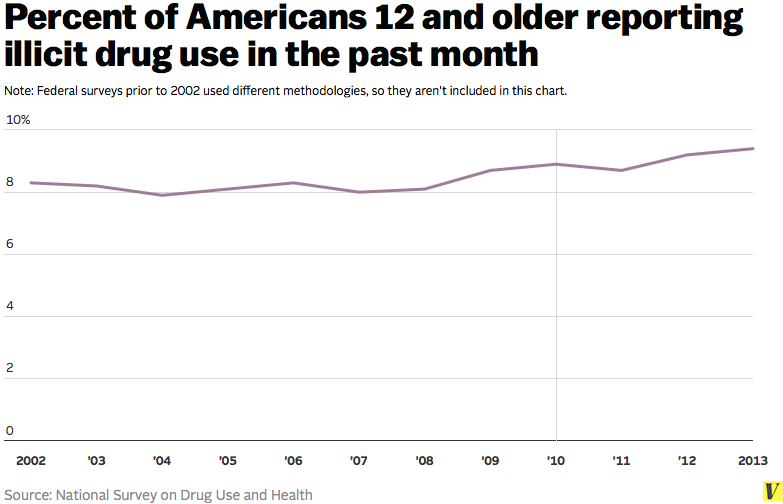 The Monitoring the Future survey, which tracks illicit drug use among high school students, found drug use has greatly fluctuated over the past few decades. In 1975, four years after former President Richard Nixon launched the war on drugs, 30.7 percent of high school seniors reported having used illicit drugs in the past month. In 1989, the year of Bush's speech, the rate was 19.7 percent. In 2013, it was back up to 25.5 percent. 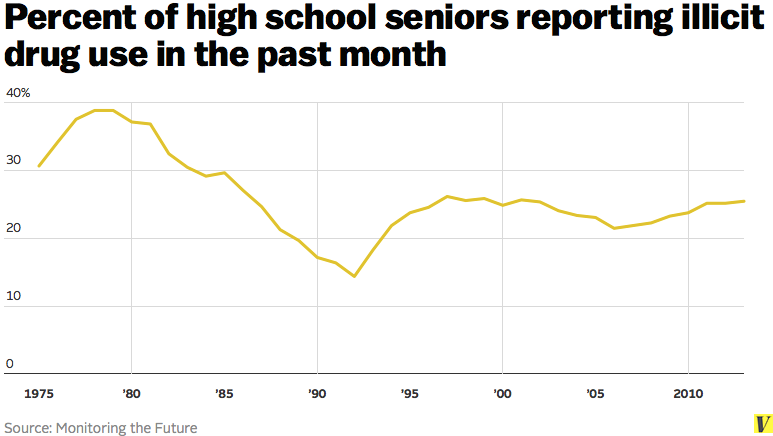 These ups and downs, which are seemingly uncorrelated with enforcement of the war on drugs, are one of the reasons many drug policy experts argue recreational drug use is largely unaffected by federal policy.

Isaac Campos, a drug historian at the University of Cincinnati, points to the late 19th century, when hard drugs such as cocaine, which was relatively new at the time, were almost entirely unregulated. "We had the perfect storm for a wave of drug abuse," Campos said. "Even then, within a system far less regulated than anyone advocates for today — a system of radical legalization — we know that rates of abuse were not significantly higher than they have been in the last decade or so."