Why Putin’s Russia is weaker than the USSR, in one chart

Share All sharing options for: Why Putin’s Russia is weaker than the USSR, in one chart

Since Russia invaded Ukraine, there've been a lot of comparisons between Putin's Russia and the Soviet Union. There's a lot wrong with that comparison, starting with one fairly obvious point: the Soviet empire wasn't just Russia. The Soviet republics in the USSR itself and the "Iron Curtain" client states in eastern Europe were key contributors to Soviet power. And Putin can't draw on them in nearly the same way as his Soviet predecessors.

To see just how much that matters, check out this chart of former Soviet-aligned economies from JP Morgan. Michael Cembalest, the investment firm's Chairman of Market and Investment Strategy, put together a list of important economic indicators for each country — GDP, trade rate, etc. This isn't a trivial amount of wealth: Cembalest notes that, together, these countries roughly equal Russia's current GDP, and their trade volume is 2.5 times larger.

What he found is that the bulk of economic power in the former communist bloc now isn't Putin's to command, and often is aligned against him. Most of that power is now in NATO and/or EU countries, like Poland and the part of Germany that used to be East Germany, or countries where Cembalest judges Russian influence to be fairly limited.

Each bar in the chart measures an economic factor across all of the countries that were once part of the Soviet Union or under its direct or indirect control, except for Russia itself. The bars are divided, by color, between states that are closely integrated or aligned with modern-day Russia (red), states that aligned against Russia (blue), and states that fall somewhere in between (orange and yellow). 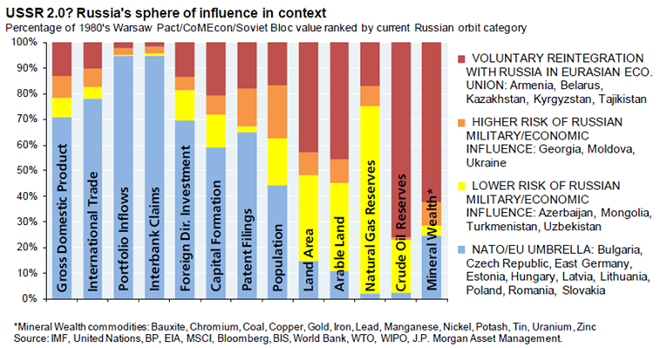 So Moscow still has some degree of influence over much of the resource wealth and arable land that it did in the Soviet era, but much more important economic assets like trade, banking, intellectual property, and pure GDP have since shifted to Western alliances. That is a pretty stark indication of just how much weaker Russia is today without those important states, mostly in eastern Europe, that have since embraced the West.

"While the Russian Federation may be plotting an increasingly divergent course from the West," Cembalest concludes, "the economic and political independence achieved by most Soviet Bloc countries in the early 1990's does not appear at risk of being meaningfully reversed or morphing into USSR 2.0." He's almost certainly right.

To learn more about the crisis in Ukraine, read the full explainer, and watch the two-minute video below: