Share All sharing options for: 5 reasons health care is no longer seen as monstrous budget buster

The federal government thinks we're entering a new era of slower-than-normal health care spending — even after Obamacare expands coverage to millions of Americans.

That's great, and somewhat unexpected, news: the United States will cover more people, but health spending will grow more slowly than it used to.

"The growth rates are expected to be lower than what we saw over the past two decades," Sean Keehan, an economist at the Center for Medicare and Medicaid Services' Office of the Actuary.

Going forward, Medicare's actuaries think that health care growth will rebound a bit — but not get anywhere near the really rapid growth of the 1990s and early 2000s. They expect that, for 2013 through 2023, health care costs will grow by an average rate of 5.7 percent each year — 1.5 percentage points slower than what we'd become accustomed to in just the last decade. 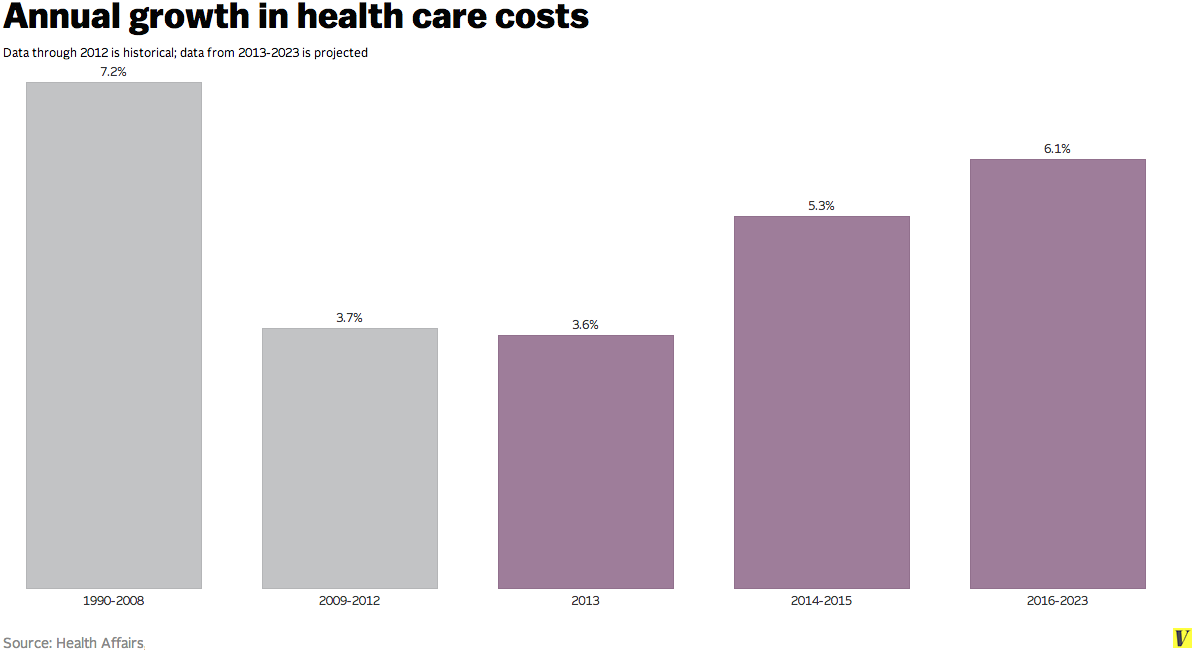 To frame the numbers another way: Medicare actuaries expect that health care costs will outpace economic growth by 1.1 percent. That's not ideal; most health economists would like to see the two numbers grow at the exact same pace. But it's still a smaller gap than what has existed historically. Between 1990 and 2008, health cost growth outpaced the economy by 2 percent.

This is big. The Medicare actuaries are saying that, while they do expect a slight rebound in medical spending post-recession, they don't think we're headed back to the super-fast growth that, for decades, has been a hallmark of the health care industry. And when health care eats up a smaller chunk of the economy (and the federal budget) that leaves more money to spend on other important things like education and infrastructure.

That leaves open a big question: why would health care costs grow more slowly in the 2010s? What makes this decade different? The Medicare actuaries aren't totally sure, but they do have some theories about the factors at play.

1) Overall economic growth is expected to be slower

During the 1990s, there were some years of really fast economic growth. Whether it was health care or the tech industry, everything was growing quickly. That type of growth wasn't especially concerning because health care wasn't eating up a bigger share of the economy — as it began to in the 2000s. You can see that in this graph, which shows health care and the economy growing at about the same clip — about 7 percent annually — three decades ago.

Over the next decade, federal forecasters expect the economy to grow, on average, by 4.3 percent each year. So part of the slowdown in health spending growth might just be the fact that everything else is growing more slowly too.

The Medicare actuaries think that insurance plans are becoming better at bargaining with hospitals, holding down the prices that they pay for various medical services.

"We're expecting the negotiation of payment rates to be stronger than it was in the 1990s," Keehan says.

Recent data already provides some evidence on this theory. This chart from the Bureau of Economic Analysis shows health care prices rising at some of the slowest rates in decades, a trend that seems to have started in the late 1990s and early 2000s but moved especially quickly in recent years.

This seems to be especially true in prescription drugs, where double-digit price growth was pretty much the norm in the late 1990s. Going forward, even with some really expensive drugs hitting the market, Medicare actuaries expect prescription drug prices to rise much more slowly.

If the price of health care rises more slowly — each MRI scan becoming just a little more expensive each year, rather than a lot — that contributes to overall slower growth in health spending.

3) Medicare beneficiaries are going to the doctor less

This was a really interesting data point from a report released last month: Medicare is spending significantly less per person than it did two years ago.

The Medicare Trustees' Report projects that by 2015 the program will spend less per person on hospital care than it did in 2008. This doesn't happen much in health care: not just slower growth, but the actual dollar amount spent on a given type of care dropping.

But even when you look at the overall picture, it generally looks pretty good: per-person Medicare spending has grown by an average of 0.8 percent since 2009. That's a lot slower than the rest of the economy, which has grown at an average 3.1 percent rate. Between 2012 and 2013, it was even slower: Medicare's per person costs stayed exactly the same.

4) Lots of baby boomers are aging onto Medicare

Medicare is growing quickly — in a way that can be good for health care spending. The public program is the largest insurer in the country, covering 49 million seniors. Its large size gives it more clout to negotiate with hospitals and doctors. Medicare typically gets lower prices from health care providers.

There are millions of baby boomers who will age onto Medicare in the coming decade — and they'll all gain access to these lower prices, too. A knee replacement that Medicare pays for is typically less expensive than one a private insurer buys, and that can be part of the slower health cost growth story.

There is a caveat to this theory: at the same time that those with private insurance age onto Medicare, there are also of millions of uninsured baby boomers entering the public program. These people would presumably see a rise in their costs, as those without insurance typically use fewer health care services.

Health insurance plans have asked patients to foot a growing chunk of their bill. Consumers with health insurance spend more on their medical care than they used to. Deductibles keep going up; there are more enrollees in high-deductible plans than ever before.

Previous research shows that when patients have to pay more for health care, they use less of it. Whether this is a good thing is a persistent health care debate; advocates worry that patients will skip needed care when they are asked to pay more. Either way, this trend in the health care system is likely to persist in the coming decade, and be part of the story of the new era of slower growth.