Ebola is in the US. Here's how health officials will try to contain it.

Share All sharing options for: Ebola is in the US. Here's how health officials will try to contain it.

On Tuesday, the Centers for Disease Control and Prevention (CDC) announced the first case of Ebola diagnosed in the United States. The patient is currently being isolated in a hospital in Dallas, Texas.

The current Ebola outbreak has already infected thousands of people in West Africa — including several Americans who were diagnosed there and then brought back to the United States for treatment. But this is the first time a person has been diagnosed with the disease inside US borders.

According to the CDC, the patient had recently been in Liberia and flew to the US before he was symptomatic or contagious. He later fell ill, visited a hospital, and was sent home because they did not suspect Ebola. At a later date, the hospital admitted him and placed him in isolation.

It's not surprising that an Ebola case has finally popped up in the United States — especially with air travel as common as it is. But it's also not a disaster. Experts say that public-health officials would likely be able to contain any Ebola outbreak in the United States pretty quickly.

Why is that? One big reason is that Ebola is not especially contagious, as diseases go. You can only get Ebola by coming in direct contact with the bodily fluids of someone who is already showing symptoms. That makes it relatively slow to spread (unlike, say, the measles).

More importantly, the United States has ample health resources and infection-control measures to contain outbreaks. This is in stark contrast to West Africa, where poverty and weak health care systems have allowed Ebola to spread and claim the lives of more than 3,000 people.

"Ebola can be scary. But there's all the difference in the world between the US and parts of Africa where Ebola is spreading," CDC director Tom Frieden said in a statement on Tuesday. "The United States has a strong health care system and public health professionals who will make sure this case does not threaten our communities."

Here's a rundown of how public-health officials would respond to any Ebola outbreak inside the United States:

As the Texas case showed, Ebola is most likely to arrive in the United States via an infected person flying from West Africa who doesn't even realize he or she is carrying the disease. Ebola can incubate in a person's body anywhere from two days to three weeks before symptoms emerge. During this time, the patient isn't contagious.

Eventually, the patient will start showing symptoms — which will probably look like the flu or traveler's diarrhea at first. (Some of the more famous symptoms of Ebola, like bleeding from orifices, don't tend to come on until later, and only appear in about half of cases anyway.)

Now, even when the patient does start showing symptoms, the disease is fairly difficult to transmit. Ebola doesn't spread through the air, and it's harder to catch than things like the flu. You can't get it just from being on the same plane or in the same public space. The only way to get Ebola is to touch a patient's bodily fluids, like vomit, diarrhea, sweat, saliva, or blood.

Still, at this point, it's important to identify the disease as Ebola quickly — and public awareness can play a big role here. Any patient traveling from West Africa who develops flulike symptoms is a prime suspect. If health workers realize that this might be Ebola early on, other people should be able to avoid getting infected by keeping away from the patient's bodily fluids.

Unfortunately, in the case of the Texas patient, this didn't work perfectly. He ended up spending four days contagious and possibly putting other people at risk before health care workers suspected that he might have Ebola and placed him in isolation at a hospital.

The patient first started feeling ill on September 24 and went to the hospital two days later. There, the CDC says health care workers didn't ask about his travel history (he'd arrived in the US from Liberia a few days earlier) and therefore didn't suspect that he had Ebola. (Update: The AP reports that the patient's sister disagrees and says that hospital officials knew that he had been in Liberia.) They sent him home, which put other people in the community at risk. It wasn't until September 28 that he was admitted to the hospital when he became even sicker. Then people realized that he might have Ebola and placed him under isolation.

In West Africa, the problem of identifying patients early has been far more widespread. Ebola managed to spread for three months around Guinea, Liberia, and Sierra Leone before officials actually identified it as Ebola — which is partly why the disease was able to affect so many people.

2) The next step: Isolate the patient

In US hospitals, any suspected case of Ebola should be treated as a potential risk until tests come back negative. The CDC has said that the patient in Texas, who has by now tested positive, is in "strict isolation" — which is exactly what needs to happen.

In West Africa, many health workers have lacked the necessary gear

Standard procedures to protect other patients and health-care workers from the patient's bodily fluids will then be put into place. Because Ebola doesn't hang out in the air, hospital workers won't necessarily have to wear respirators or what you might think of as full Outbreak gear. However, they will protect their body and face from any bodily fluids that might splash on them, using things like gowns or full body suits, masks, gloves, and goggles.

Anything that touches the patient will have to be sterilized or disposed of in a safe manner. And if the patient dies, the body will have to be carefully handled so that it doesn't transmit fluids. (The death rate for the current outbreak has been roughly 50 percent, although good health care in the US might be able to boost those odds.)

Unfortunately, West Africa lacks many of these protections — which is one reason why the disease has spread so widely there. Many health-care workers in Guinea, Liberia, and Sierra Leone don't even have the necessary goggles, gowns, and gloves to deal with Ebola patients. What's more, health-care workers are often in short supply in those countries. 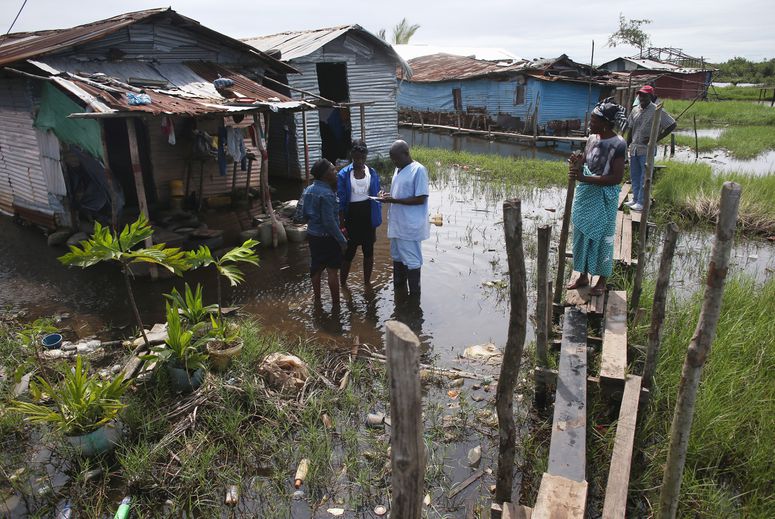 A Liberian health worker interviews family members of a woman suspected of dying of the Ebola virus in Monrovia, Liberia. (John Moore/Getty Images)

3) Then, track down other potential patients

Detective work is the next crucial part of controlling a disease like Ebola. Health workers will interview the patient, the patient's relatives, and other potential close contacts to monitor them and make sure that they don't spread the disease to others if they have it. Officials will then suggest various options for these people, depending on the level of risk, including watching and waiting, isolation at home, and testing for infection.

In the United States, that's perfectly doable. The CDC says that everyone who came in contact with the Texas patient while he was infectious has been identified, including family members and "two to three community members." The ambulance workers who brought the patient to the hospital have tested negative for Ebola and will be quarantined and monitored, according to Reuters.

But the situation is wildly different in West Africa, where tracking down contacts has been especially problematic. As an editorial in The Lancet put it, "The geographical spread of cases and movement of people in and between the three countries presents a huge challenge in tracing those who might be infected." And the World Health Organization has said that "low coverage of contact tracing" has been a huge problem in Liberia's attempts to contain Ebola.

It's important to remember that roughly 50 percent of the patients in the current West Africa Ebola outbreak have survived. There's no specific pill or shot that will make an Ebola infection go away, but doctors can try to make the patient comfortable, give IV fluids, and treat symptoms. (There are also some experimental treatments, but their efficacy is still unknown.)

Roughly 50% of patients in the current outbreak have survived

But even if a patient seems to be healing, health authorities typically won't release him or her from the hospital until it's clear that the person has cleared the virus from the body, has tested negative, and won't be a danger to others. Those precautions are necessary to prevent the disease from spreading.

This might seem intuitive, but it hasn't always happened in West Africa. For example, the BBC has reported that patients sometimes go missing from hospitals in Sierra Leone — a country where many people don't trust that medical care will help them. That increases the odds that the outbreak will spread.

The best-case scenario for the United States is that a patient traveling from West Africa realizes that they might possibly have Ebola as soon as they start feeling sick. Everyone else makes sure not to come in contact with this person's bodily fluids. And the outbreak ends with just one patient.

The worst-case scenario, meanwhile, is that an Ebola patient comes to America, is ill for days, and comes in contact with a lot of people before anyone realizes that something unusual is going on. That could be much worse, although it's not a guarantee that Ebola will get transmitted to other people. Already, the ambulance workers who brought the Texas Ebola patient to the hospital have tested negative for the disease. And family and community members are being monitored.

Even if Ebola spreads from the initial patient to others, it's much less likely here that the virus will get spread farther than one city or town than it is in West Africa. "I don't think we’ll have a serious public health threat in any of the developed countries," Osterholm told me in July. The real problems are for countries like Guinea, Liberia, and Sierra Leone that don't have the resources to contain the outbreak quickly.

For more on the basics of the Ebola outbreak, check out 14 things you need to know about Ebola.

Updated on October 1: Updated in response to new information about the Texas Ebola patient originally being sent home from the hospital because Ebola was not initially suspected. Updated again in the afternoon with news from the AP that the patient's sister says that the hospital did know that the Texas patient had been in Liberia on his first visit.