Recessions drive down fertility rates for more than a decade

Share All sharing options for: Recessions drive down fertility rates for more than a decade

When the economy goes south, Americans tend to have fewer babies. Researchers  have know this for awhile and, intuitively, it makes sense: tough economic times can put the costs of raising a child out of reach. The pattern has repeated itself again and again, with birth rates dropping as unemployment rises. 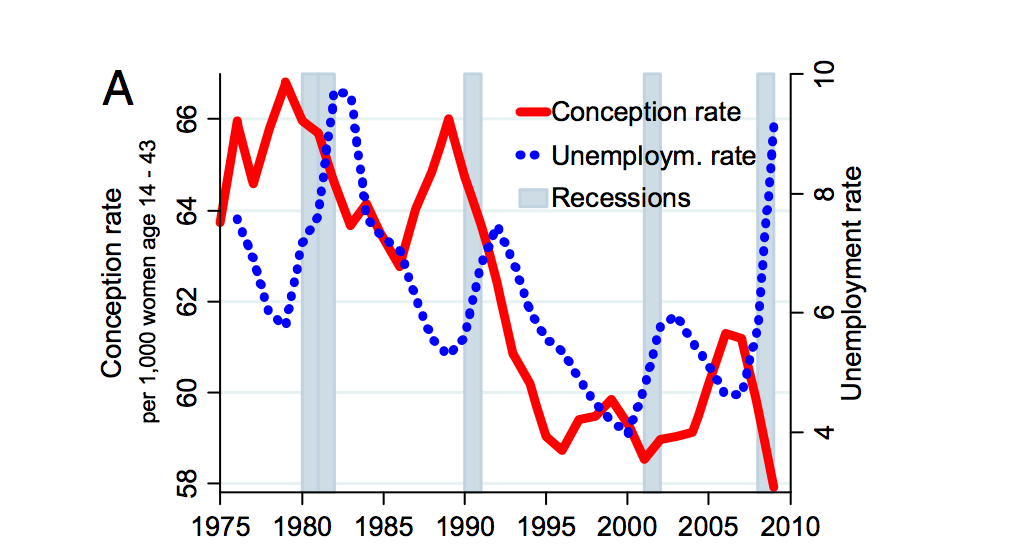 (Proceedings of the National Academy of Sciences)

They show that a one-percentage point increase in the unemployment rate between ages 20 and 24 corresponds to 14.2 fewer pregnancies per 1,000 women in that age group by age 40.

If these figures hold for women who were in their early 20s during the most recent economic turndown, the Great Recession, that would translate into a 8.9 percent increase in those who remain childless at age 40.

We find it remarkable," the authors write, "that changes in macroeconomic conditions in young adulthood have such a profound effect on an individual woman's future life."

As to why lower birth rates persist far past a recession, Currie and Schwandt cite separate research showing that those who enter the workforce during a recession tend to have lower wages for as long as a decade. And those depressed wages could make the decision to have a child more financially challenging long after a recession has ended.