Study: We've wiped out half the world's wildlife since 1970

Share All sharing options for: Study: We've wiped out half the world's wildlife since 1970

Over the past four decades, humans have managed to kill off a staggering number of wild animals worldwide — from charismatic tigers and rhinos down to obscure frogs and lizards. Most of these deaths don't spark anything close to the outrage that the death of Cecil the lion did in 2015. But they do add up.

A major 2014 survey by the World Wildlife Fund has estimated that the number of mammals, birds, reptiles, amphibians, and fish worldwide has declined a whopping 52 percent between 1970 and 2010. The main culprits? Hunting, fishing, deforestation, pollution, and other forms of habitat destruction. In a nutshell, us. The big question now is whether we can use our ingenuity to halt — or even reverse — this trend.

Vertebrate populations declined 52 percent between 1970 and 2010 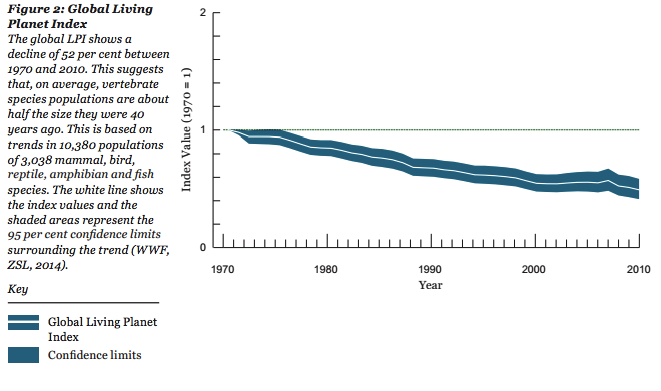 In order to compile the WWF's "Living Planet Index," scientists studied 10,380 representative populations of 3,038 species of mammals, birds, reptiles, amphibians, and fish from all over the globe. They then examined trends over time.

The scientists found that some bird, fish, reptile, and mammal populations have been increasing, some have remained stable, and some have been declining. But the declining populations are declining so sharply that the overall trend is down — and Earth has lost half its wildlife overall:

This number doesn't mean we've wiped out half of all species. It means that on average, the world's vertebrate populations are about half the size they were back in 1970.

One big surprise here: The decline of wildlife has been far steeper than anyone realized. In an earlier report in 2012, the WWF had estimated that vertebrate populations had declined just 28 percent since 1970. Now they say it's a 52 percent decline. What changed? In that previous survey, scientists had overrepresented trends in North America and Europe (where wildlife populations have been fairly stable). In this one, they re-weighted their samples to account for sharper declines in the species-rich tropics. That makes for a grimmer picture.*

Land animals are declining, yes — but freshwater species are vanishing the fastest

A forest elephant in the northern Republic of Congo. (James Hopkirk/Flickr)

When most of us think of wildlife, we think of charismatic megafauna like lions, elephants, and gorillas. Those animals are certainly dwindling: the population of land species has declined 38 percent since 1970. Blame hunting and habitat loss — or sometimes both. For instance, deforestation in West and Central Africa has left forest elephants with just a smattering of disconnected habitats. That, in turn, has made them easy prey for ivory poachers. Not surprisingly, their numbers have fallen 60 percent since 2002.

Meanwhile, marine species — turtles, sharks, fish, seabirds — have declined 39 percent worldwide since 1970. There are ups and downs here. Some marine populations are slowly starting to recover from overfishing (think California's blue whales). But others haven't been so lucky. A large number of turtles, sharks, and seabirds are still accidentally caught and killed by fishermen targeting other species — a practice known as "bycatch."

But the picture is actually bleakest for freshwater populations — fish, frogs, shorebirds — which have declined 76 percent since 1970. Habitat loss and water pollution are the main culprits there, though so are changes in water levels due to human activity. In South Australia, for instance, people have been extracting freshwater from the Coorong wetland for irrigation, which, in turns, has led to increases in water salinity and declines in fish and shorebirds like the curlew sandpiper.

Hunting and fishing are still the biggest threats

The WWF offered up this chart of the "primary threats" to those animal populations that are at risk:

Hunting and fishing ("exploitation") and habitat degradation are still the biggest threats to wildlife by far.

By contrast, global warming has been a much smaller threat to most species over the past 40 years, though the WWF notes it's likely to become a bigger factor in the future.

The evidence that wildlife protection works is mixed

The report isn't all bad news for wildlife. The scientists found that land species inside protected areas are faring mildly better — declining just 18 percent since 1970 (compared with a 39 percent decline for their counterparts outside protected areas):

The WWF authors do caution, however, that this isn't solid proof that conservation and wildlife protection measures are working. Possibly the species inside protected areas were simply less susceptible to various adverse pressures to begin with.

Indeed, when the authors zoom in on individual case studies, the track record of conservation efforts looks pretty mixed. The chart below shows an optimistic story. The tiger population in Nepal has been rebounding after the Nepalese government cracked down on poaching in the five protected areas:

The chart below, however, is less optimistic. In Africa, many white and black rhino populations have either been eradicated or are in sharp decline, despite being in "protected areas." Poaching has been surging in recent years, due to high demand for rhino horns in Southeast Asia, and the protected areas are often poorly monitored and enforced:

"Clearly," the report notes, "threats to species are not mitigated by the designation of a protected area alone."

There's a lot more in the full WWF report, which includes plenty of environmental gloom, but also more notable conservation success stories. Page 106, for instance, takes a look at how mountain gorillas in Africa are rebounding sharply in Rwanda, Uganda, and the Democratic Republic of Congo, thanks in part to a thriving new "gorilla tourism" industry.

* Note: The appendix of the WWF report has a longer explanation of the methodology — and a defense of their new weighting. Note that it's entirely possible the estimate could change again in future reports.

Further reading (some optimistic, some less so):