For the past few days, President Obama has drawn a lot of criticism for saying that his administration "didn't have a strategy yet" for countering the Islamic State in Iraq and Syria (ISIS). To Obama's critics, it was proof that the president was floundering in the face of a major crisis.

This Wednesday, Obama said something even more confused — and, more than just a gaffe, it signifies a much deeper tension in his approach to ISIS. He said the goal of US policy against ISIS is to "destroy and degrade" the group — but it's not. His administration's actual policy is to manage the crisis, not end it by defeating ISIS outright.

Obama's rhetoric on ISIS is confused because his administration's policy on ISIS is confused by internal contradictions. On the one hand, Obama really does have long term ambitions to destroy ISIS. On the other hand, he recognizes that this is impossible in the near term, and that the best the US can do is lay the groundwork for ISIS' eventual collapse. This essential tension in American objectives explains why Obama's rhetoric and actual policy on the group are so at odds. 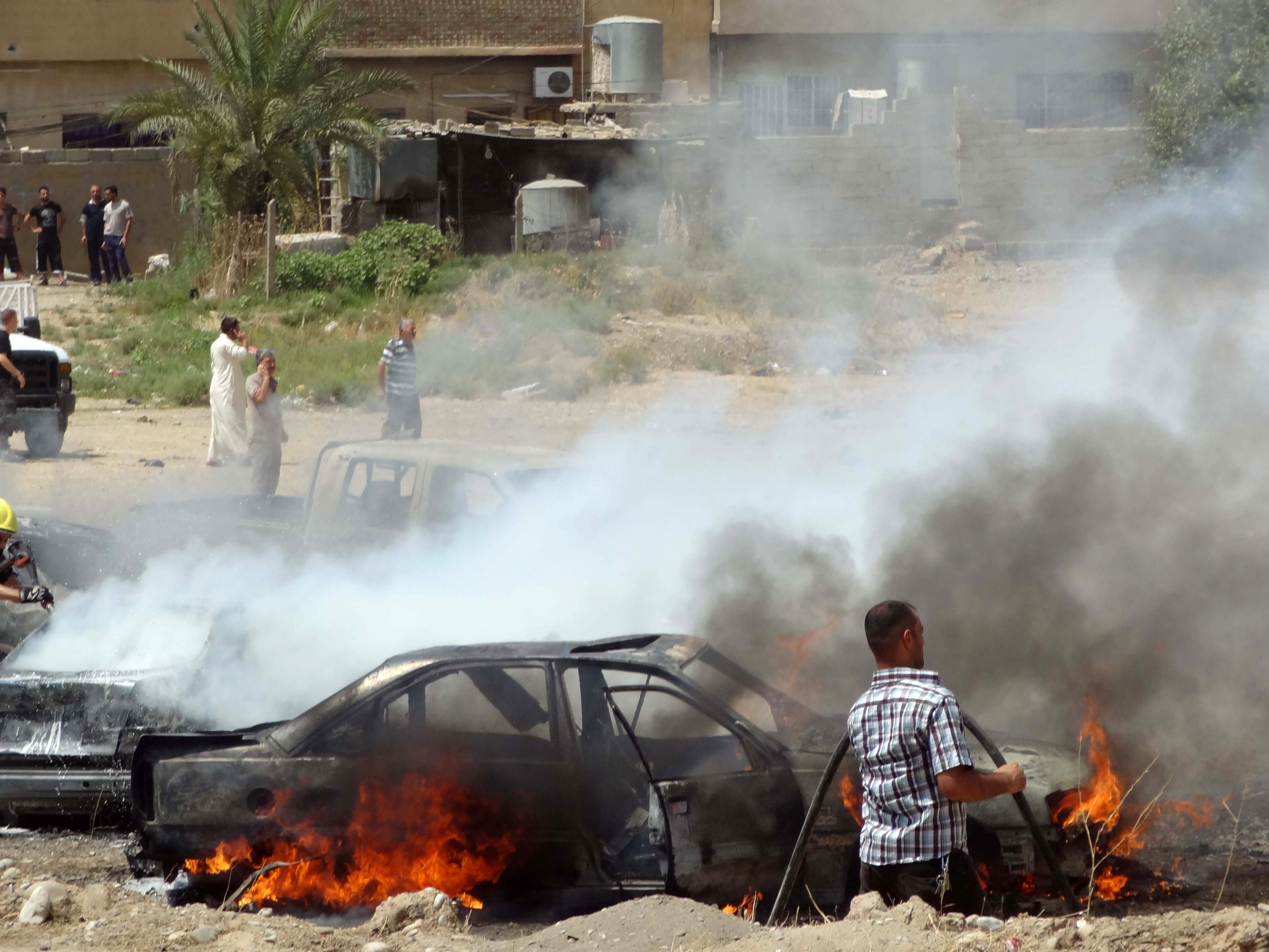 The aftermath of a car bombing in Kirkuk, the capital of Iraqi Kurdistan. (Marwan Ibrahim/AFP/Getty Images)

A reporter (unidentified in the White House transcript) called Obama out on the contradiction. What he said in response was even more confusing:

Q    Did you just say that the strategy is to destroy ISIS, or to simply contain them or push them back?

PRESIDENT OBAMA:  Our objective is to make sure that ISIL is not an ongoing threat to the region.  And we can accomplish that. It's going to take some time and it's going to take some effort. As we've seen with al Qaeda, there are always going to be remnants that can cause havoc of any of these networks, in part because of the nature of terrorist activities.  You get a few individuals, and they may be able to carry out a terrorist act.

But what we can do is to make sure that the kind of systemic and broad-based aggression that we've seen out of ISIL that terrorizes primarily Muslims, Shia, Sunni -- terrorizes Kurds, terrorizes not just Iraqis, but people throughout the region, that that is degraded to the point where it is no longer the kind of factor that we've seen it being over the last several months.

In other words, Obama is saying that he wants to, if not defeat ISIS, then roll it back to the point where it can't threaten entire nation-states as it does now. This is his clearest statement yet of his administration's objectives in Iraq and Syria. And it's totally at odds with America's actual policy.

Since ISIS overran Mosul, Iraq's second largest city, in June, the administration has very consistently said that ISIS couldn't be destroyed unless first there was political reform in Iraq and Syria. That means, at a minimum, a more inclusive government in Baghdad and an end to the civil war in Syria. It also means that the US can't just go in to "degrade and destroy" ISIS through force.

There's some hope for Iraqi political reform in the near-to-medium term. But the US can't stop the war in Syria. Until that happens, the world has basically no chance of ensuring that ISIS is "not an ongoing threat to the region," as Obama said. So long as ISIS controls a huge chunk of Syria, it'll be able to sustainably fund its violent campaign. Without effective local ground forces to partner with — which the US has in Iraq, but lacks in Syria — no American military campaign to crush ISIS in Syria could possibly succeed.

The Obama administration appears to agree that it can't solve the ISIS problem without these things happening first — but is also seems to believe, very deeply, that ISIS is too dangerous to be left to its own devices. So the US is hoping that political pressure on Baghdad, and support for some kind of political resolution in Syria, can lay the groundwork for Iraqis and Syrians to do what's ultimately necessary to root out ISIS on their own. The current military effort campaign is designed to temporarily weaken ISIS and buttress the political process.

That's the nice way of describing the policy. A harsher, but still accurate, description is that Obama strategy boils down to nudging Iraqis and Syrians to decide, on their own, to take the hard but necessary steps to solve this on their own. But since this depends so much on local actors cooperating — and a seemingly magical end to the Syrian civil war — there's nothing like a guarantee that it'll succeed.

The more America talks about wanting to destroy ISIS, the more Iraqis and Syrians think the US might be planning to take the military and political lead

In either reading, this is a reasonable strategy. It is controversial, and there's nothing that ensures it'll work, but it's something. So that's why it's so problematic to see Obama's comments this week suggesting that the US has a very different, much more aggressive strategy of seeking to "degrade and destroy" ISIS. Vice President Joe Biden's comments on Wednesday that the US will follow ISIS "to the gates of Hell" did not help.

This suggests that the administration has two contradictory strategic approaches — that American efforts should be aimed at helping Syrians and Iraqis solve this, but also that the US should immediately and unilaterally degrade the ISIS threat — that can work at cross-purposes. The administration seems to think the latter serves the former, but there's a risk that the US is sending mixed messages to the Iraqis and Syrians. The more America talks about wanting to destroy ISIS, the more Iraqis and Syrians think the US might be planning to take the military and political lead.

This creates another danger: that the administration becomes so frustrated with the lack of Syrian and Iraqi progress against ISIS that it seriously escalates American strikes against ISIS, in the hopes of destroying the group on its own. That wouldn't work. And it could end in disaster.