Switzerland rejects single-payer in landslide, keeps its version of Obamacare

Share All sharing options for: Switzerland rejects single-payer in landslide, keeps its version of Obamacare

Swiss voters resoundingly rejected a proposal to move the country to a single-payer system on Sunday. Instead, the country will keep its private health insurance system, which looks a whole lot like Obamacare.

Two-thirds of Swiss voters opposed creating a state-run health plan in the national referendum. The issue was put to a vote after Swiss campaigners gathered more than 100,000 signatures, the threshold for getting a national vote; some initial polls in 2013 had shown strong support for a state-run system. 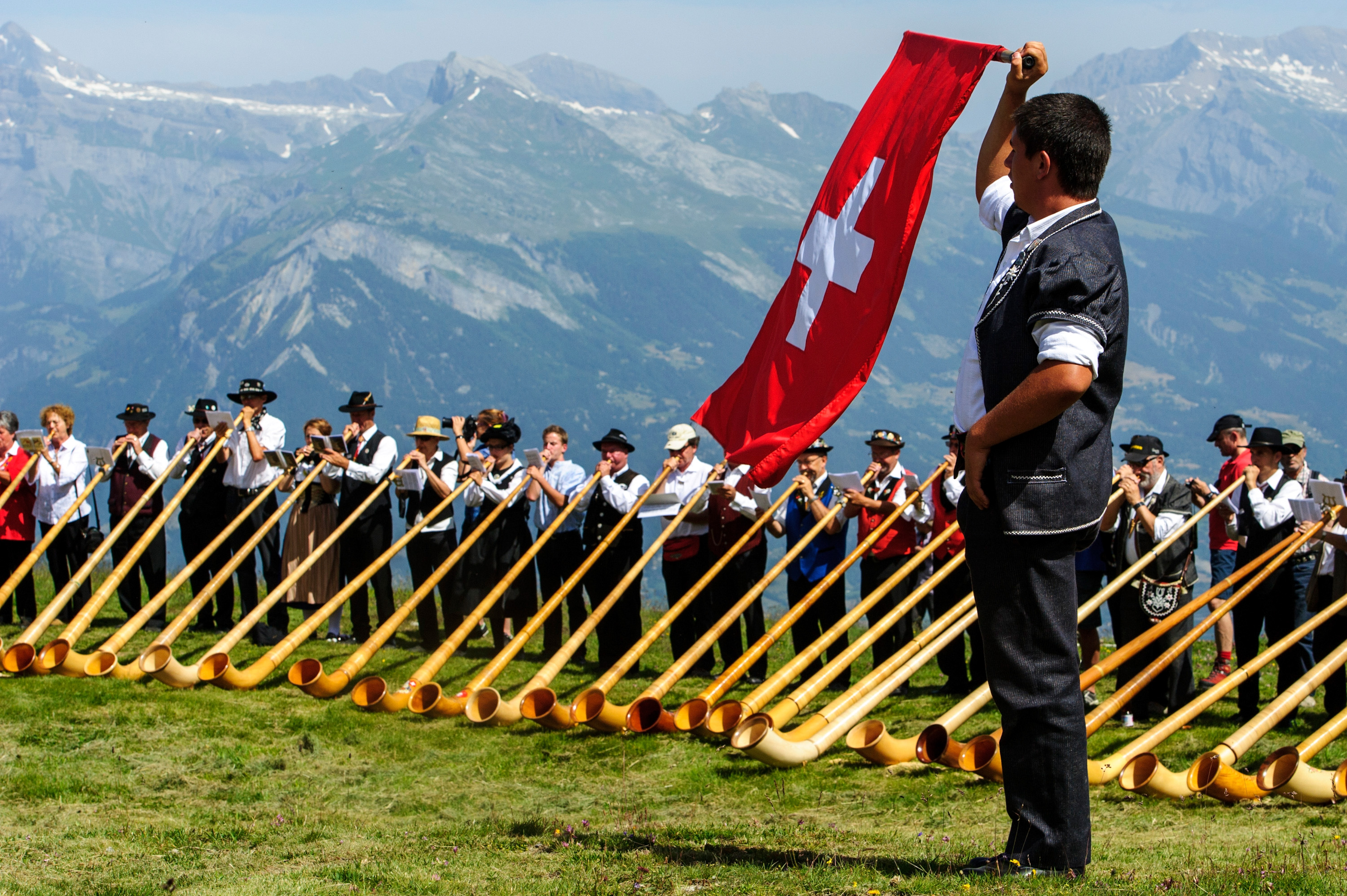 For a country with a relatively small population (8 million), Switzerland comes up a shocking amount in debates over American health care. That's probably because the Swiss health care system looks pretty similar to the one Obamacare sets up.

Since 1996, Switzerland has required all residents purchase coverage through an individual mandate. "If you move to Switzerland, you have three months to buy coverage and it's retroactive to your arrival," Aaron Carroll explains in his excellent video primer on the Swiss health care system.

Swiss residents buy coverage from private health insurance plans, who compete for their business. The average monthly premium for adults, in American dollars, was $329 in 2013.  There are no pre-existing conditions in Switzerland; insurers are only allowed to vary premiums based on age, charging different rates for children under 18, young adults between 19 and 25, and adults over 25.

The Swiss system does have a relatively high amount of cost-sharing. Patients typically have to pay for 10 percent of their health care services out-of-pocket, even after they meet their deductible. And for prescription drugs, patients on average cover 20 percent of the medication's cost.

The Swiss health care system typically stacks up really well in international surveys. The Commonwealth Fund's ranking of international health system — which uses metrics like access to care and costs — recently put Switzerland in second place of all the countries it looked at. 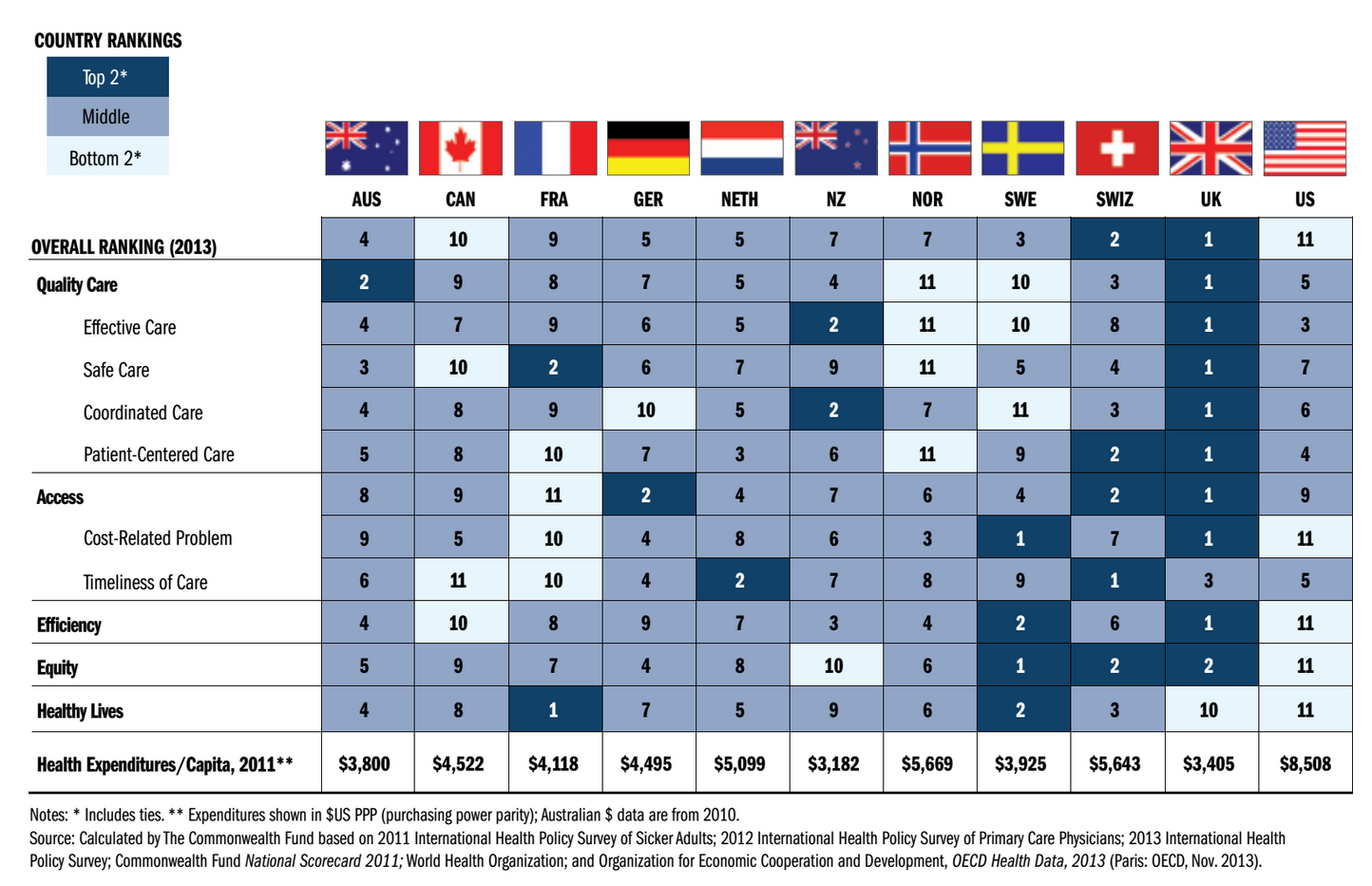 Switzerland's health care system does the best at seeing patients quickly. Seventy-nine percent of Swiss residents say that, the last time they needed medical care, they were able to see a doctor that same day, more than any other country in the Commonwealth Fund survey. Only 3 percent of doctors there have had trouble getting their patients' speciality tests like CT Scans and MRIs, the lowest number the same survey recorded.

That access comes at a price: the Swiss system is one of the more expensive in Europe. 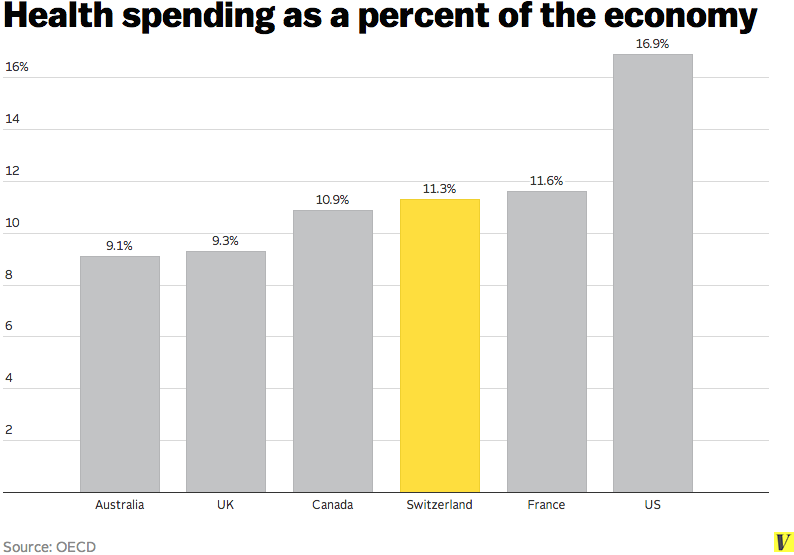 Only the Germany, the Netherlands and France devote a larger share of their economy to paying for health coverage. The Swiss system suggests that regulated competition hasn't succeeded at containing costs. Lots of access to doctors means more health care spending.

Some of this might also have to do with the fact the Swiss system isn't especially efficient. Sixteen percent of patients there report spending "a lot of time on paperwork or disputes related to medical bills." Only the United States does worse on these metrics. 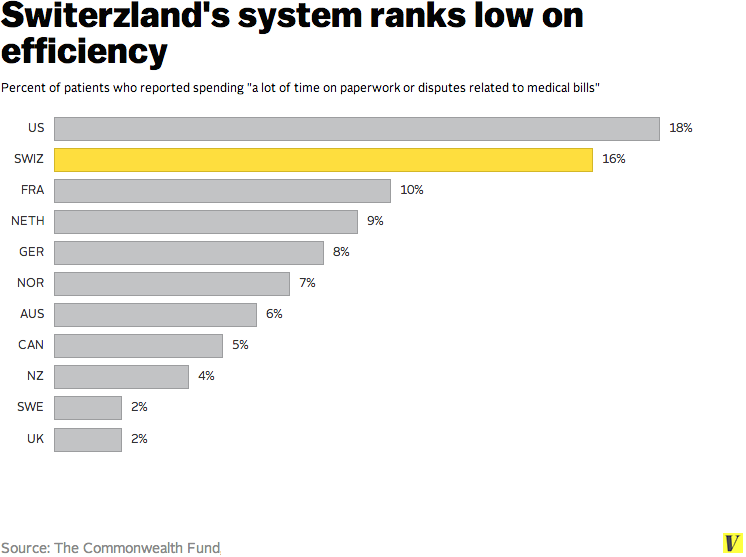 That explained much of the impetus behind the drive for single-payer, which was seen as a way to reduce the Swiss system's administrative costs. As one advocate told the AFP, "Over the past 20 years in Switzerland, health costs have grown 80 percent and insurance premiums 125 percent. This is not possible anymore. It has to change."

It's not going to change now, though. The Swiss, perhaps unsurprisingly, like a system that provides really great access to care — and, at this point, don't want to see it overhauled.