Share All sharing options for: The VA scandal of 2014, explained

The Department of Veterans Affairs in 2014 was embroiled in a scandal over massive wait times in its health-care system, particularly at one hospital in Phoenix. In the aftermath, Congress and the White House took steps to reform the VA.

The Department of Veterans Affairs in 2014 was embroiled in a scandal over massive wait times in its health-care system, particularly at one hospital in Phoenix. In the aftermath, Congress and the White House took steps to reform the VA.

Officials at the Phoenix VA hospital were accused of keeping a secret wait list of veterans who were seeking health care. This list was kept out of sight of federal regulators, who were instead sent documents that vastly underreported how long it took for patients in Phoenix to see a doctor.

The secret wait list kept out of view, for example, that patients had to wait an average of 115 days to be seen by a primary care provider. Those long wait times may have had dire consequences: CNN reported that as many as 40 veterans died while on wait lists at the Phoenix hospital, and an official investigation found the wait time contributed to deaths.

VA officials could have, of course, reported those long wait times to the federal government, but that could have meant losing out on pay bonuses hospitals receive for keeping wait times short. What's scandalous about the behavior at the Phoenix VA hospital is that instead of making the long wait times public in hopes of fixing the problem, administrators tried to make it look like the issues didn't exist at all.

The scandal at the Phoenix hospital also led to greater scrutiny of other VA-run facilities and whether they also have unacceptable wait times for patients. And it put a spotlight on the care the VA provides, which has alternately been praised as an exemplar of modern health-care systems and derided as failing America's veterans.

But above all, the scandal put a national spotlight on some of the financial incentives the VA used to encourage quicker and better care — and how those incentives actually drove some VA employees to cheat the system so they could continue getting pay bonuses even as they didn't deliver adequate services to patients.

How did the VA go so wrong in the first place?

The evidence available suggested that two main factors contributed to the scandal at the Phoenix hospital:

The combination — staffing shortages and financial incentives to see patients quickly — encouraged workers at the Phoenix VA hospital to act inappropriately, falsifying records about how quickly they were seeing patients in order to come closer to federal expectations.

But it wasn't just Phoenix: a VA audit suggested the perverse incentives and practices were a result of national VA policy and, therefore, systemic.

Under stronger federal oversight, these problems may have been caught. But as the Government Accountability Office explained in multiple reports, the federal government's oversight of VA officials was practically nonexistent.

In the aftermath, Congress and the White House took several steps to reform the VA: they eliminated perverse pay bonus incentives, expanded the VA leadership's power to discipline employees, boosted funding for staff and infrastructure, and allowed access to government-subsidized private care in areas where VA facilities aren't easily accessible.

The solutions go back to the two key problems. The VA had to expand access to care so veterans could see a doctor when they needed one. But the agency also needed to remove any incentives and add disincentives for employees to cheat if, for whatever reason, they couldn't provide care as quickly as federal officials hoped.

Were these accusations exclusive to the Phoenix VA facility?

The American Legion tracked reports of mismanagement at hospitals across the country. At the time, the group located attempts to conceal long wait times in at least 10 other VA facilities besides the one in Phoenix, Arizona.

These problems included a range of alleged bad practices. One St. Louis, Missouri, director, for example, said he was demoted for trying to boost productivity. Whistleblowers in Texas and Colorado claimed local VA administrators manipulated the scheduling system to conceal wait times. And an audit team in Florida found secret wait lists similar to those in the Phoenix VA facility.

Here was the American Legion's map, which can be enlarged to get the full details: 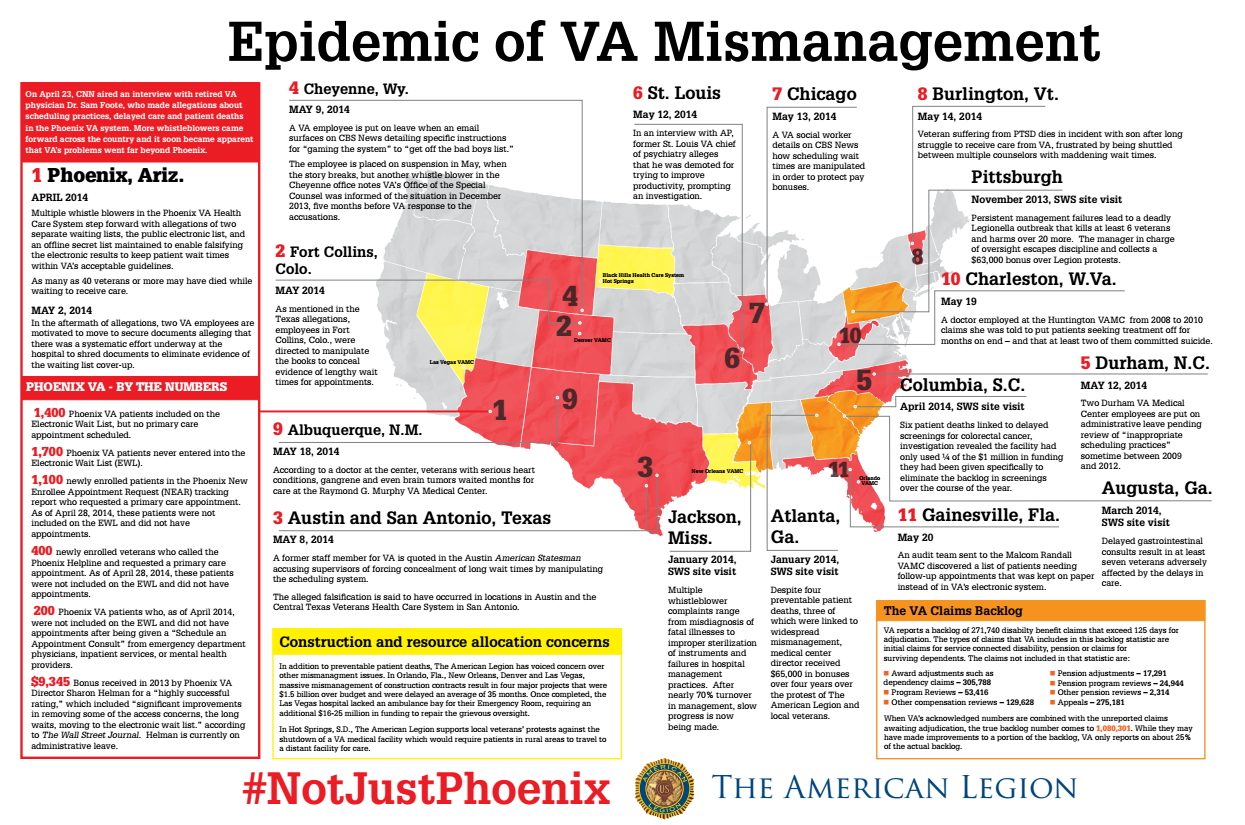 The underlying causes of these abuses were systemic to the VA, according to multiple investigations at the time. The agency didn't provide enough funding for staff and infrastructure to see all patients quickly, but VA staff were encouraged to see patients within 14 days with the incentive of pay bonuses. Since administrators and staff still wanted the extra pay, they set up elaborate schemes — such as secret wait lists — to look like they were seeing patients within 14 days when they in fact weren't.

Who was affected by the VA's problems?

The VA, as the operator of the country's largest health-care system, served more than 6 million patients in 2014 throughout more than 150 medical centers and more than 800 outpatient clinics. So the scheduling problems affected thousands, perhaps millions, of US military veterans who relied on the VA's health-care system to treat war wounds.

Various reports suggested cancer patients suffered the most as a result of the long wait times and scheduling problems. A previous fact sheet from the VA linked 23 patients' deaths to delays in gastrointestinal cancer tests and treatments. CNN, meanwhile, tracked one particular veteran, 71-year-old Thomas Breen, who died of bladder cancer after waiting for months just to set up an appointment. By the time Breen's family got a call from the VA to schedule an appointment, Breen was dead.

What did the official investigations uncover?

A report from the VA's Office of Inspector General confirmed earlier reports of lengthy wait times and fraudulent reporting by hospital administrators in Phoenix, Arizona. It also found the problems were systemic across the VA, which led the inspector general to expand his investigation to more facilities.

The report had three key points:

Another report from the inspector general also concluded that the wait lists contributed to veteran deaths.

A VA audit, meanwhile, echoed that the scheduling problems were widespread and fostered by the VA's poor policies and perverse incentives. First, the VA gave bonus payments for seeing patients in a timely manner. Then, when local VA officials realized they couldn't meet the goals due to inadequate staffing and infrastructure, they manipulated the electronic data reported to the VA to hide patients who weren't being seen so quickly. Following the audit, the VA decided to abandon the unrealistic scheduling goal.

How did Congress and the White House address the scandal?

After the scandal broke, Congress and the Obama administration took separate steps to fix the VA's health-care system.

Before Congress announced its plan, the Obama administration made a couple of regulatory changes:

Had funding for the VA's health-care services increased prior to the scandal?

Per-patient health-care funding had increased at the VA in the lead-up to the scandal, but it didn't keep up with overall increases in health-care costs.

The VA's per-person funding has increased, on average, by 3 percent each year since 2009, with most of the increase coming between 2009 and 2010. 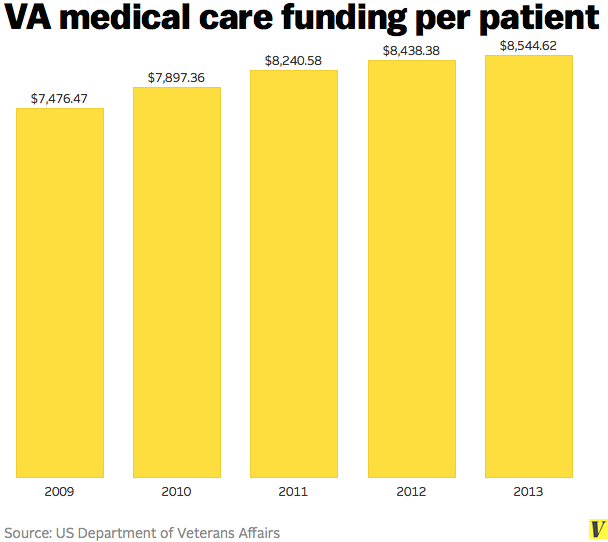 This explained why veteran advocates claimed that the years of funding increases were inadequate.

"Mr. Chairman, for the past decade, [Disabled American Veterans] and our partners in The Independent Budget (IB) have consistently testified before this Committee and others about shortfalls in VA's medical care and construction budgets," Joe Violante of Disabled American Veterans testified in front of Congress. "In the prior ten VA budgets, the amount of funding for medical care requested by the Administration and ultimately provided to VA by Congress was more than $5.5 billion less than what was recommended by the IB."

What other problems did the VA face?

Another major issue facing the VA in 2014 was a massive benefits backlog.

If a veteran found an error in a benefits claim, he or she could report it to the VA to get the issue fixed. But as the cases worked through the VA's lengthy appeal process, veterans weren't able to access the full benefits they were entitled to — including direct compensation, education and training, and pensions, as a few examples.

USA Today reported in May 2014 that at least 350,000 veterans who fought in wars before Afghanistan and Iraq had outstanding appeals on decisions regarding their benefit. That was down from 611,000 in 2013, but it still represented hundreds of thousands of veterans who struggled to get the benefits they're supposed to obtain after serving their country.

The big problem was that almost all VA benefits were historically tracked on paper, instead of electronically. In response to its backlog, the VA began moving those records to a paperless system, standardized appeals documentation, hired more full-time workers that deal with appeals, and used videoconferences to speed up the appeals process.

But changes took years, despite promises from President Barack Obama on the campaign trail that he would prioritize the reforms.

"It's like driving around for two decades in a car that had the 'check engine' light on," says Joe Violante, legislative director for Disabled American Veterans, "and now someone is trying to do something about it."

“Do you know how it feels to have the president of the United States target you?”

Ukraine and the problem of “futurelessness”