Share All sharing options for: The MH17 plane crash in 2014, explained

On July 17, 2014, Malaysian Airlines flight MH17 — en route from Amsterdam to Kuala Lumpur — was shot down as it flew over separatist-controlled territory in eastern Ukraine, triggering an international crisis due to suspicions that Russia-backed rebels were behind the attack.

What happened to MH17?

On July 17, 2014, Malaysian Airlines flight MH17, en route from Amsterdam to Kuala Lumpur, was shot down as it flew over separatist-controlled territory in eastern Ukraine. All 298 people on board died.

It was not clear who shot down the plane, although both sides in the Ukraine crisis leveled accusations at each other.

Senior US intelligence officials told the Associated Press that Russia-backed rebels in the region were likely responsible, but they found no evidence of a direct link between Russia and the shootdown. The United States and Ukraine claimed a Russian-built Buk anti-aircraft missile system was used in the attack on the plane; the Buk system is described as very sophisticated, and many analysts suspected the rebels would need supplies and training from Russian personnel to successfully shoot down a high-altitude plane like MH17.

In which @abunin challenges the theory that Ukrainian rebels were able to operate a Buk missile system. #FlightMH17 pic.twitter.com/7npSe9Wvjd

The rebels denied responsibility and blamed Ukraine for the crash. "We simply do not have such air defense systems," the rebels reportedly said to Interfax, according to a tweet from New York Times reporter Ellen Barry. But the rebels previously claimed to have a Buk system, according to a June 29 report sourced to the rebel Donetsk People's Republic press service.

The crash was just the latest development in the conflict in Ukraine. Tensions between Russia and much of the international community, including the US, were already high before the MH17 crash, so the shootdown — and Russia's possible involvement — only made matters worse.

Is Putin to blame for the MH17 shootdown?

Senior US intelligence officials told the Associated Press that there was no evidence tying Russia directly to the MH17 shootdown, but Russia's — and President Vladimir Putin's — involvement in the region helped foster the crisis that led to the shootdown in the first place.

Analysts argued that regardless of whether Russia participated in downing MH17, the shootdown is a consequence of Russia's meddling in Ukraine and Putin's inability to control the situation. Julia Ioffe of the New Republic explained, "Putin has started something he can't finish, unleashing a dangerous force he no longer fully controls — nor does he seem to care to — and it's costing more and more lives."

As for the actual crash, senior US intelligence officials said Russia-backed rebels in the region were likely responsible, but not Russia itself. Ukrainian officials also released audio from what they said was an intercepted phone call between a separatist leader and a Russian security official that indicates the separatists were responsible for the attack, but the recording wasn't verified.

The US and Ukraine claimed a Russian-built Buk anti-aircraft missile system shot down the plane. The system is so complicated, according to analysts, that it's very unlikely the rebels — if they were responsible — could have used it without proper supplies and training, which many believed the separatists got from Russia.

"Volunteer militia do not have the training to shoot sophisticated antiaircraft weapons," former US Ambassador to Russia Michael McFaul tweeted.

Where did the conflict in Ukraine stand prior to the MH17 crash?

The MH17 crash was just the latest in a long series of events in the Ukraine crisis that began in November 2013. Here is a very quick rundown on what's happened since then, repurposed largely from a timeline by Vox's Libby Nelson:

November 2013: The Euromaidan protests broke out in Kiev, Ukraine's capital, and other cities around the country. Protesters supported closer ties with Europe to help Ukraine's struggling economy — instead of the closer ties with Russia sought at the time by then-President Viktor Yanukovych.

February 2014: With the support of protesters, Ukraine's parliament ousted Yanukovych. He fled to Russia, where he now lives in exile. Ukraine later in 2014 elected pro-European businessman Petro Poroshenko to replace Yanukovych.

Late February and early March 2014: Unmarked Russian forces seized Crimea, a peninsula in southern Ukraine that was previously part of Russia and is majority ethnic Russian. The occupiers later held a referendum on whether Crimea should be absorbed into Russia. The referendum passed, and, despite reports of intimidation and fraud, Russia annexed the peninsula.

Spring 2014: Conflicts between Ukrainian forces and separatists in eastern Ukraine escalated, with hundreds of casualties on both sides. The rebels appear to be getting support from Russia, which is accused of providing tanks, weapons, and even unmarked troops.

Senior US intelligence officials told the Associated Press that the shootdown was likely a mistake.

Historically, it's almost never the case that military groups shoot down civilian airliners on purpose. American officials, for instance, said they mistook Iran Air Flight 655 for a fighter jet when a battleship in 1988 shot down the plane and killed the 290 civilians on board.

None of this rules out the possibility that someone purposely targeted a civilian aircraft, but there simply wasn't evidence to support that in the aftermath of the crash.

Who died in the MH17 crash? 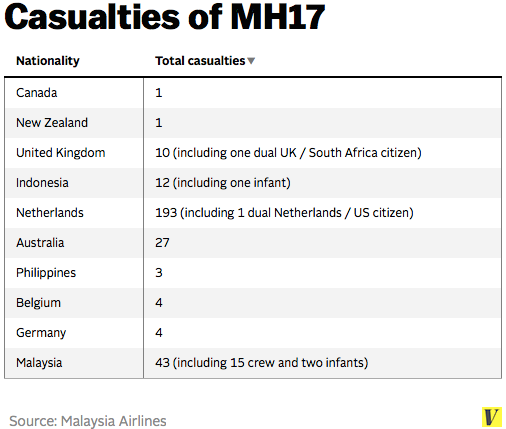 Among the passengers were several people who were traveling to the AIDS 2014 conference in Australia. One of the victims, as Vox's Julia Belluz reported, was Joep Lange, a prominent HIV researcher and former president of the International AIDS Society.

The loss was a devastating blow to HIV/AIDS advocates. "To lose people so heavily engaged in efforts to fight HIV is an incalculable loss in every sense," said Shawn Jain of the Whitman-Walker Clinic in Washington, DC.

Who controlled the MH17 crash site?

Ukraine rebels controlled the MH17 crash site in the immediate aftermath and during initial international investigations. As this map shows, MH17 (marked by a burning plane) went down over rebel-controlled territory: 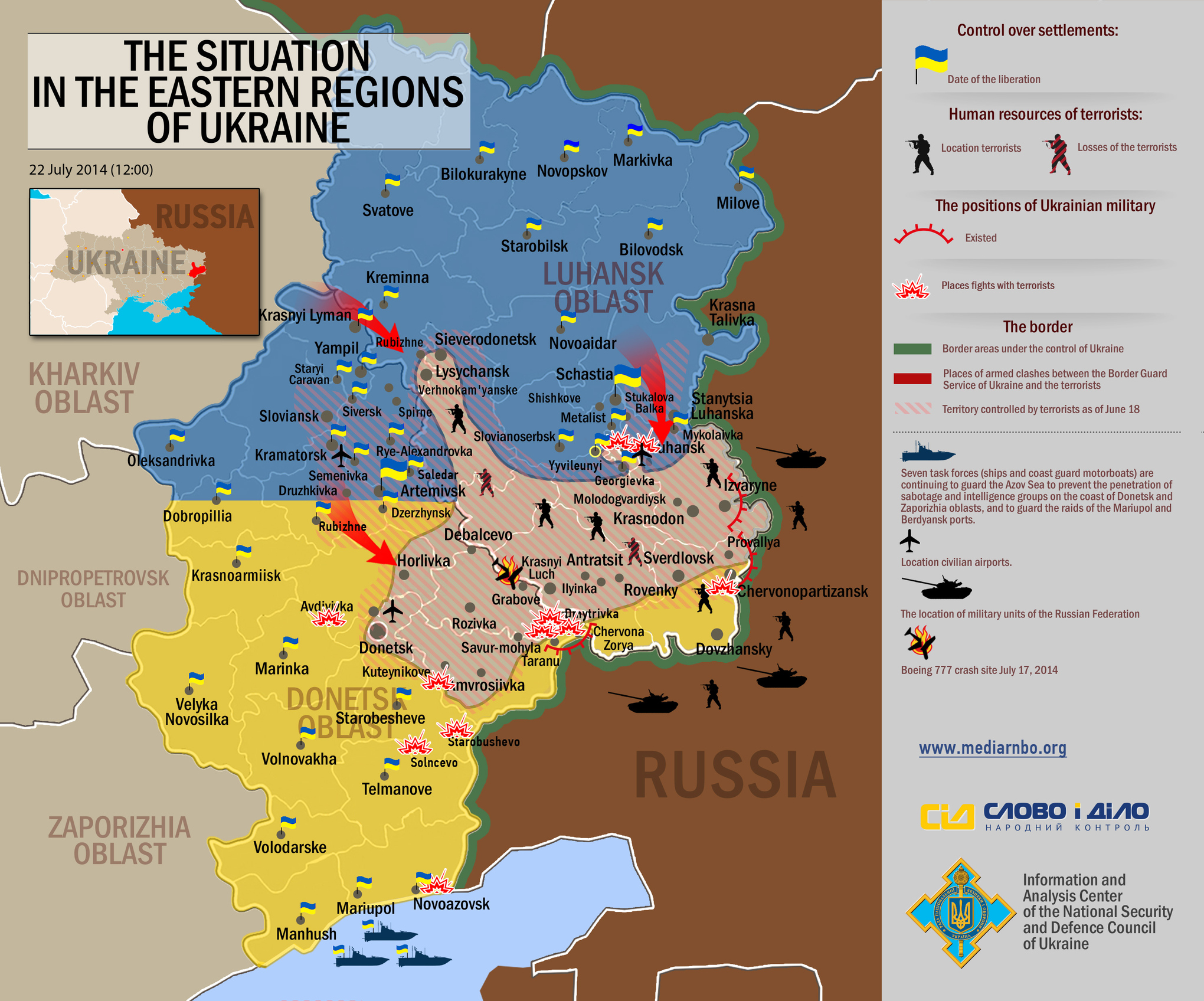 Rebels' control over the crash site led to a few problems in the weekend following the crash. According to several reports, rebels removed bodies and evidence from the site and blocked international respondents trying to get in.

World leaders strongly condemned the rebels' actions. President Barack Obama asked what the rebels were trying to hide. The European Union threatened Russia with more sanctions if the rebels, who are backed by Russia, didn't comply with the international investigation. The UN Security Council, backed by Russia, also condemned the shootdown and demanded full access to the site to conduct an official investigation.

How did world leaders respond to the MH17 crash?

President Barack Obama on July 18, 2014, called for a ceasefire in the area so "a credible international investigation" could be conducted. "I think it's very important for folks to sift through what is factually based and what is merely speculation," he cautioned. Obama said separatists have received "a steady flow of support" from Russia, including sophisticated weaponry. "Time and again, Russia has refused to take the concrete steps necessary to deescalate the situation," he said. "It has continued to violate Ukrainian sovereignty and to support violent separatists. … Now is, I think, a somber and appropriate time for all of us to step back and take a hard look as what has happened. Violence and conflict inevitably lead to unforeseen consequences." Later, on July 20, 2014, Obama criticized rebels for obstructing the investigation into the crash.
Russian President Vladimir Putin on July 17, 2014, said responsibility for the shootdown ultimately fell on Ukraine: "I want to note that this tragedy would not have happened if there were peace on this land, if the military actions had not been renewed in southeast Ukraine. And, certainly, the state over whose territory this occurred bears responsibility for this awful tragedy." Putin on July 20, 2014, also said, "We must do everything to provide security for the international experts on the site of the tragedy. In the meantime, nobody should and has no right to use this tragedy to achieve their narrowly selfish political goals."

German Chancellor Angela Merkel on July 18, 2014, asked for caution. "The events with the plane, as far as I remember, were not even 24 hours ago and at the moment we need to sort out an independent investigation," she said.

UK Prime Minister David Cameron on July 20, 2014, threatened further sanctions against Russia in response to the incident. "We must establish the full facts of what happened. But the growing weight of evidence points to a clear conclusion: that MH17 was blown out of the sky by a surface-to-air missile fired from a rebel-held area," he wrote. "If it is the case, then we must be clear what it means: this is a direct result of Russia destabilising a sovereign state, violating its territorial integrity, backing thuggish militias, and training and arming them."