Share All sharing options for: The civil rights legacy of Eric Holder

US Attorney General Eric Holder will resign from his position as the head of the Justice Department, staying on only until a successor is named. As Holder departs, he leaves behind a civil rights legacy that includes some of the broadest steps in recent decades to dismantle — or at least lessen — the racial disparities in America's criminal justice system.

The reforms tackled major issues within the US justice system such as mass incarceration, the war on drugs, and harsh local policing. These issues had gone largely unquestioned by Holder's tough-on-crime predecessors, despite some of the deep racial disparities they helped create.

Holder has weathered controversy after controversy during his tenure: his handling of national security and surveillance issues, his decision to try 9/11 plotters like Khalid Sheikh Mohammed in New York City, and his unwillingness to prosecute big banks. Then there was the controversy surrounding Fast and Furious, a sting operation in which, as the Los Angeles Times explained, federal officials "purposely allowed licensed firearms dealers to sell weapons to illegal straw buyers, hoping to track the guns to Mexican drug cartel leaders and arrest them." But, as Politico's Glenn Thrush wrote in a recent profile, there's a simple reason why President Barack Obama has stood behind him: "Holder has been willing to say the things Obama couldn't or wouldn't say about race."

Some of these comments about race were made at great political risk, often inspiring ire from opponents and right-wing talking heads. In 2009 conservatives like Rush Limbaugh criticized Holder for a Black History Month speech in with the attorney general called the US a "nation of cowards" for failing to seriously confront its history of racism.

Holder stood by his remarks. "I wouldn't walk away from that speech," Holder told ABC News in July. "I think we are still a nation that is too afraid to confront racial issues," rarely engaging "one another across the color line [to] talk about racial issues."

Although Holder's candor earned him criticism, it built a legacy that attracted massive support among minority groups. Robert Jones Jr. of Son of Baldwin captured the sentiment in a recent blog post: "To me, Eric Holder was the only member of the Obama Administration that acted even a little bit like he honestly, truly gave a fuck about actual justice for black people."

After the war on drugs began in the 1970s, the US dramatically increased the number of people it put in jail and prison, both at the federal and state levels. Since then, the difference in imprisonment and incarceration rates between white Americans and minority groups widened significantly.

Under Holder, the Department of Justice and the Obama administration have taken several steps to undo that recent history of mass incarceration.

These reforms reflect the stark costs and failures of mass incarceration and the war on drugs, in many ways. But Holder never held back in characterizing them as race issues.

"Right now, unwarranted disparities are far too common," Holder said in a 2013 speech. "As President Obama said last month, it’s time to ask tough questions about how we can strengthen our communities, support young people, and address the fact that young black and Latino men are disproportionately likely to become involved in our criminal justice system — as victims as well as perpetrators."

Holder took significant steps to dial back the war on drugs

Beyond sentencing reforms, Holder oversaw some of the most significant drawbacks in the war on drugs since former President Richard Nixon and Congress launched the sweeping anti-drug effort in the 1970s. While previous administrations often touted federal laws to shut down medical marijuana dispensaries that are legal at the state level, the Obama administration drew back the crackdowns and even allowed Colorado and Washington to carry out the full legalization of marijuana without much federal interference, issuing  guidances that enabled states to continue their marijuana legalization efforts.

In 2013 Holder filed a guidance asking prosecutors and regulators to avoid coming down on individual marijuana users and businesses in states where marijuana is legal — as long as the businesses avoided selling to minors and met other criteria. In 2014 Holder issued a guidance trying to assure banks — unsuccessfully, for the most part — that they can work with state-legal marijuana businesses without facing federal prosecution.

Most recently, Holder questioned whether marijuana's strict legal classification — the foundation for the war on marijuana at the federal level — is justified and whether pot really belongs in the same legal category as heroin. "I think it's certainly a question that we need to ask ourselves — whether or not marijuana is as serious a drug as is heroin," Holder said in an interview with Yahoo News. "[T]he question of whether or not they should be in the same category is something that I think we need to ask ourselves and use science as the basis for making that determination."

Holder saw these reforms as a civil rights issue, noting the disproportionate rates at which black and Hispanic Americans were punished for marijuana-related crimes despite using the drug at roughly the same rate as white people. 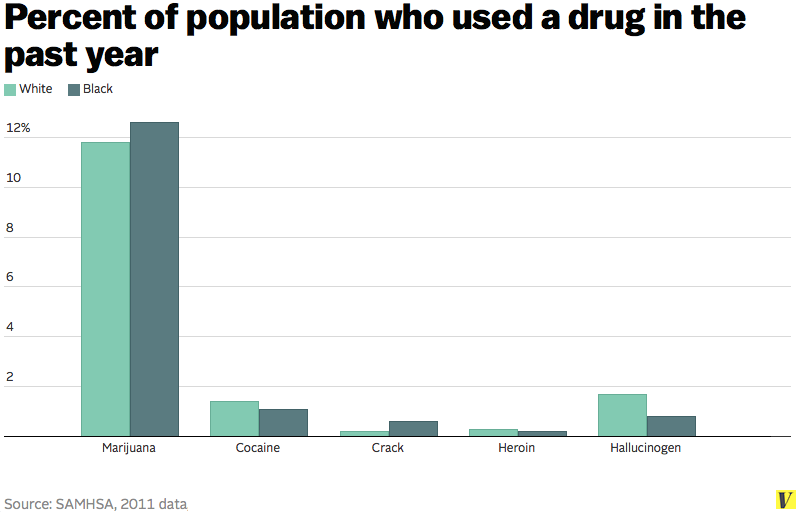 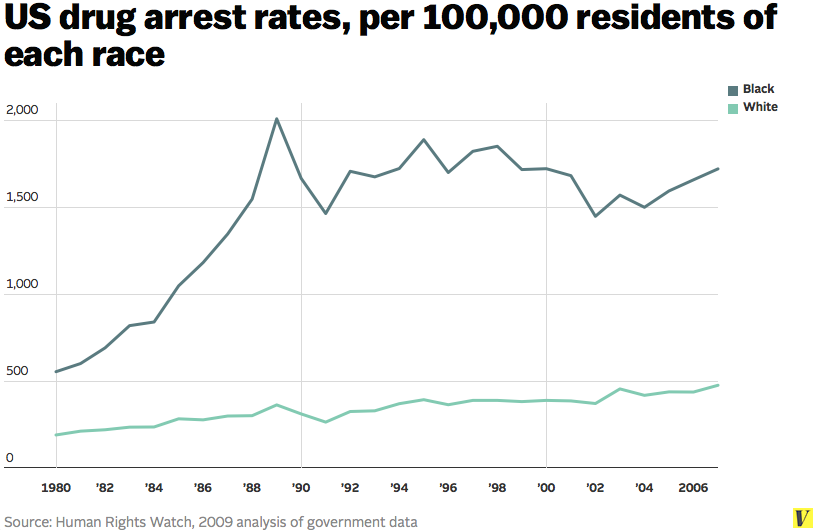 "[Y]ou see the disproportionate impact on communities of color, especially when you see that drug usage among African Americans, Hispanics is roughly the same as whites, and yet you see Hispanics and African Americans going to jail for far longer and a much greater rate," Holder told Yahoo News. "It's a civil rights issue, and one that I'm determined to confront as long as I'm attorney general."

Following the August 9 shooting of Michael Brown and the protests in Ferguson, Missouri, that followed, Holder's Justice Department announced an investigation of the entire Ferguson Police Department and unveiled initiatives to help local governments in St. Louis County confront their unequal treatment of minorities.

"The Department of Justice is working across the nation to ensure that the criminal justice system is fair, constitutional, and free of bias," Holder said in a statement. "Ferguson and St. Louis County are not the first places that we have become engaged to ensure fair and equitable policing and they will not be the last. The Department of Justice will continue to work tirelessly to ensure that the Constitution has meaning for all communities."

Holder's involvement in Ferguson wasn't unique for the attorney general. Holder has overseen more than twice as many civil rights investigations on police departments than his predecessor did in a similar time period. He even took steps against New York City's stop-and-frisk policy, which gained national notoriety for its disproportionate effect on black and Latino residents.

The civil rights investigations have clear goals: to systemically address the disparities in police treatment faced by white and non-white civilians and send a signal that such disparities are unacceptable in the eyes of the Justice Department.

For Holder, his pursuit may reflect his own experiences with law enforcement. "I was a young college student driving from New York to Washington, stopped on a highway and told to open the trunk of my car, because the police officer told me he wanted to search it for weapons," he told ABC News. "I remember as I got back in the car and continued on my journey how humiliated I felt, how angry I got."

Through his position, Holder was given the opportunity to address that humiliation he and other minority Americans face every day, and he often called on the nation to follow him.

"Will we again turn a blind eye to the hard truths that Ferguson exposed, burying these tough realities until another tragedy arises to set them off like a powder keg?" Holder asked in a recent speech at New York University. "Or will we finally accept this mandate for open and honest dialogue, reach for new and innovative solutions, and rise to the historic challenge — and the critical opportunity — now right before us?"

Still, a lot remains to be done

Despite the changes under Holder, advocates and experts generally agree much more will need to be done to repair the disparities in the justice system.

Some drug policy experts, for instance, say the dismantlement of racial disparities in the war on drugs should go further — through marijuana legalization nationwide and the decriminalization of all drugs. The states taking on relaxed marijuana policies still face major hurdles in areas ranging from banking to taxes due to federal policies.

"While it's nice to see Holder making these statements and we applaud the reforms that he has effected during his time in office, I wish he had done more within his term to directly address these problems," said retired Baltimore Police Major Neill Franklin, executive director of Law Enforcement Against Prohibition, in a statement. "I am hopeful his successor will recognize the war on drugs for what it is: the single biggest problem afflicting our criminal justice system and the central civil rights issue of our time."

Pointing to the 2013 slowdown in the fall of the imprisonment rate, some criminal justice experts argued the US needs reforms that address the long, disproportionate sentences of violent offenders as well.

"The states need to be more ambitious at the types of reform they're passing to reduce the population," said Brian Elderbroom, a senior research associate at the Urban Institute's Justice Policy Center, in a previous interview. "The lesson here is there's a lot more work to be done."

But it's unquestionable that Holder made significant strides just by bringing the issue of racial disparities in the criminal justice system to the mainstream. For the Americans who are disproportionately affected by the policies he has tried to fix, it was refreshing just to hear someone of his rank acknowledge the massive racial gaps in prisons, policing, and the war on drugs. According to NPR's Gene Demby, Reverend Al Sharpton summed up Holder's legacy in this way at a press conference Thursday: "If he is resigning, the civil rights community has lost the most effective attorney general on civil rights in the history of this country."