Share All sharing options for: The 5 most surprising findings from Pew’s faith and politics survey

Fifty percent of the US thinks homosexual behavior is sinful, according to a Pew poll released today.

In a study titled, "Public Sees Religion's Influence Waning: Growing Appetite for Religion in Politics," Pew looks at the various ways faith and politics intersect in the public sphere.

Many of the findings were to be expected. For instance, white evangelical Protestants continue to skew right, and the religiously unaffiliated (called "nones") tend left. Also, younger respondents (Millennials) are, on average, more liberal than older generations.

But other results are more surprising. Take, for example, the fact that, within a year, the number of Americans who see homosexual behavior as sinful has increased by 5 percentage points: from 45 percent in 2013 to 50 percent today. The spike is noteworthy given the steady rate at which LGBT acceptance has grown over the last decade. Americans also increasingly think that President Obama is "unfriendly" toward religion.

The findings presented in the report are based on telephone interviews conducted September 2 and September 9, 2014. 2,002 adults were surveyed from a national sample. The study is well worth reading in its entirety, and you can do so here. But if you're looking for a quick breakdown, here are 5 of the most striking findings from the study.

Nearly 3 out of 4 Americans think religion is losing its influence on society.

Consistent with previous surveys, most (56 percent) Americans see this development as a "bad thing." Of course, this number varies among religious groups: 77 percent of white evangelical Protestants are concerned about the waning influence of religion, compared with 61 percent of Catholics, and 30 percent of "none"s.

On the other hand, among the 22 percent of people who think religion is gaining influence in America, opinion is almost equally split on whether or not it's a good thing: 12 percent say it is, 10 percent say it isn't.

3)   There is still plenty of opposition to homosexuality

The number of Americans who believe homosexuality to be sinful has ticked up five percent in the last year alone (45 to 50 percent). And this belief varies among religious groups, as the following chart shows.

The demographics behind these answers are notable: more men than women (52 to 42 percent) think businesses should be allowed to refuse service for religious reasons, as do those aged 65 and older (60 percent) compared to those aged 18-29 (35 percent). The findings also differ according to race with more whites (52 percent) favoring the religious exemption than blacks (36) and Hispanics (35). And of course, answers also differed according to affiliation with religious groups.

The poll finds 49 percent of Americans in favor of same-sex marriage and 41 percent opposed (and again, there was variation among religious affiliation). These findings reflect a slight change since a February 2014 Pew poll, which found 53 percent of Americans supported same-sex marriage. But any answers as to why support is down at this point would be merely speculative. Writes Pew, "It is too early to know whether this is an anomaly or the beginning of a reversal or leveling off of the growth in support for same-sex marriage widely observed in polls over the past decade."

For now, the important takeaway is that America is still pretty evenly split when it comes to LGBT issues, even is there has been a noticeable increase in public support in recent years. 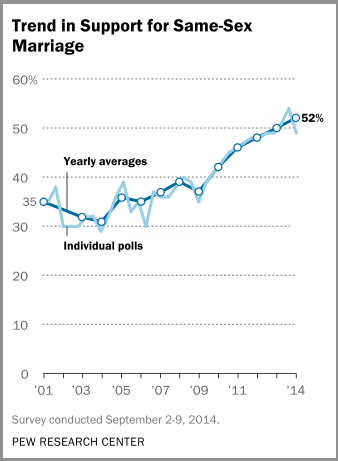 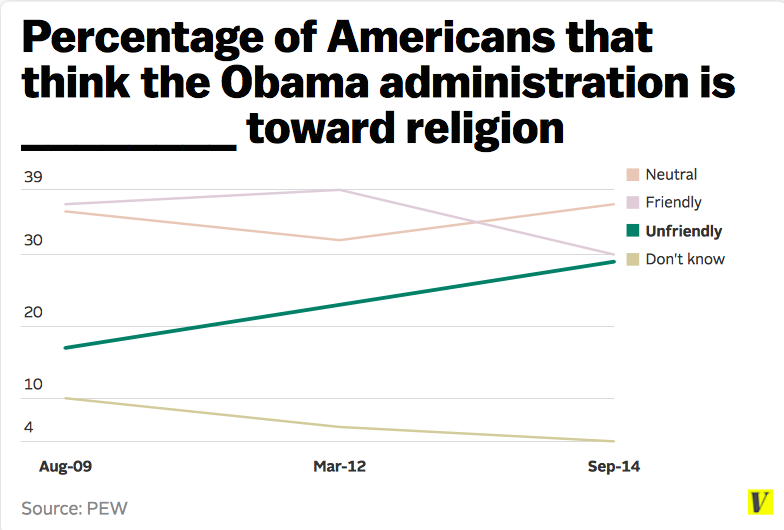 The report says, "Most Americans continue to oppose the idea of churches endorsing particular candidates during political elections." However, in recent years, there has been a noticeable uptick in public support for "religious involvement in politics." In August 2010, 43 percent of Americans said churches should express their views on political and social questions. Currently, that number is up to 49 percent, with more Republicans than Democrats (59 vs 42 percent) believing houses of worship should express political views.