Water scarcity could limit the spread of fracking worldwide

Share All sharing options for: Water scarcity could limit the spread of fracking worldwide

The fracking boom has arguably been the biggest energy story in the United States over the past decade. Among other things, cheap shale gas from fracking has pushed down electricity prices and curtailed US carbon-dioxide emissions (by displacing dirtier coal).

Many of the biggest shale resources are in water-stressed areas

So why hasn't the shale boom spread elsewhere? After all, plenty of other countries — from China to Poland — have their own vast shale formations with gas and oil trapped inside. Unlocking all those supplies could, in theory, boost global natural-gas supplies by as much as 47 percent.

Water is one major constraint. The fracking process currently uses a lot of water — typically 2 to 7 million gallons per well. And as a new report from the World Resources Institute finds, many of the biggest shale resources happen to be located in areas that are already stressed for water. Here's a map:

More specifically, the WRI report finds that 38 percent of global shale resources are located in arid areas or places that are already under high levels of water stress.

China, for example, has some 1,115 trillion cubic feet of natural gas locked in its shale formations — the largest resource in the world. The problem? Much of this gas sits out in western China, where water supplies are fairly limited. That's one reason why China has found it hard to develop shale gas as a substitute for coal (though it's not the only reason — as detailed below).

Other countries with massive shale resources but a notable dearth of water include Algeria, Mexico, South Africa, Libya, Pakistan, Egypt, and India.

On the flip side, the report does identify a few countries that have both ample shale resources and plenty of water — particularly Argentina, Canada, Australia, and Brazil. That doesn't mean these countries are all destined to get their own fracking booms. There are lots of different variables at play, from technological know-how to politics, as discussed further below. But it does mean that water is less of a constraint there.

Why fracking is so water-intensive

It's worth taking a quick jaunt through the process of using hydraulic fracturing and horizontal drilling to extract oil or gas from shale rock. Here's a basic fracking operation for natural gas in the Marcellus Shale in Pennsylvania: 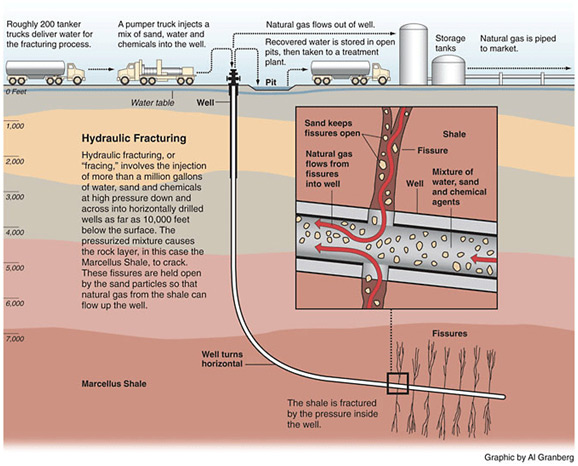 First a well is drilled all the way down to the layer of gas-rich shale — which can sit more than 5,000 feet underground. The drill then turns and begins drilling horizontally.

After the well is drilled and lined, the fracking stage can begin. A mixture of water, sand, and chemicals is pumped into the well at extremely high pressures and goes through the tiny holes in the casing. The fluids crack open the shale rock. The sand holds those cracks open. And the chemicals help the natural gas seep out.

Fracking requires a lot of water to crack open the shale rock. A typical well can use between 2 million to 7 million gallons over the course of its lifetime. In the United States, there were roughly 35,000 wells fracked in 2011 — which means between 70 billion and 140 billion gallons of water were used in all.

How much water is that, really? In 2011, that only represented about 0.3 percent of all US freshwater consumption. But the percentages can vary by region — in Texas, it's about 1 percent. And in some local areas, the percentage is even higher.

The WRI report offers a more detailed look at which parts of the world, exactly, this water consumption could pose a problem. In Pakistan, for instance, local water supplies are already strained by household consumption, agriculture, and so forth. And global warming is expected to put further stress on those supplies. Fracking would add another layer of stress.

Is there any way around this? Some companies are looking at ways to reduce the amount of water used in fracking. In Texas, for instance, some drillers are exploring the use of propane or butane instead of water. But the costs are considerably higher — which explains why more than 95 percent of fracking companies still use water.

Meanwhile, other companies are exploring techniques to recycle the water used in fracking. Right now, the chemical-laced water is often withdrawn from a fracking well and disposed in a separate well. Big advances in recycling would allow companies to clean that water and frack other wells. But that technology is still early, and, for now, fracking is still quite water-intensive.

Water isn't the only obstacle to a global fracking boom

It's also worth noting that water isn't the only constraint on fracking's spread around teh world. A lack of technological know-how, poorly understood geology in certain regions, and regulations can all play a role.

Let's take another look at where the biggest shale gas and oil resources are: 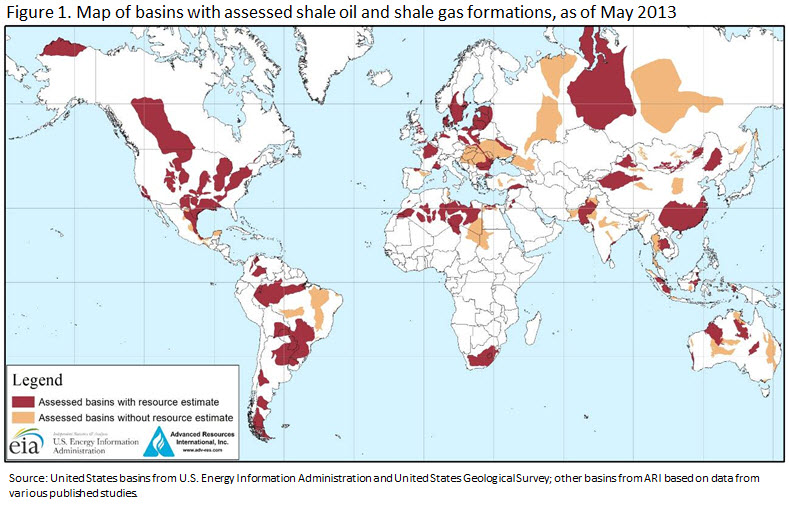 In many ways, the United States was an ideal place for the fracking boom to unfold. Many of the shale plays are located on private lands — so regulations were fairly light. Energy companies had a lot of experience with the complex geology of US shale (and were aided by excellent mapping from the US government). And there were plenty of smaller companies experimenting with different drilling techniques and perfecting the process.

In many ways, the US was uniquely suited for a fracking boom

By contrast, other countries, like France and the Netherlands, have banned fracking for fear of water contamination. Others, like Austria, have such strict regulations that drilling is uneconomical.

And even countries in favor of fracking have seen sluggish progress, in part because working with shale can be extremely difficult and complicated. In Poland, there's still plenty of work that has to be done to understand the region's geology. And, in China, the spread of fracking has been hampered by a variety of factors — complex geology, a dearth of water supplies in key regions, and a burdensome layer of regulations that hamper innovation.