We don't know which countries have the hardest workers

Share All sharing options for: We don't know which countries have the hardest workers

"The problem," a European once told me, "is that you Americans live to work, while we work to live."

Proposing to do something about it is an evergreen of American journalism. In early July, Bryce Covert told us we know we work too much, now how do we stop it? On September 2, Daniel Hamermesh offered that Americans work too much, and that needs to change. Too much, in this context, typically means "more than is typical in other rich countries." And the data cited is almost invariably drawn from the OECD's handy Average Annual Hours Actually Worked Per Worker series. Like this, for example:

In addition to the overworked American story, the chart tells other tales. Last fall, The Economist used it to preach the value of labor productivity, noting the counterintuitive contrast between the hard-working Greeks and the lazy Germans, with Germans richer because they work more productively, despite working less.

the OECD is neglecting the people who don't work at all

Unfortunately, this data doesn't quite say what people think it does. For starters, as the OECD cautions in the fine print, this series is not really suitable for cross-country comparisons. It's not a harmonized data set; it simply aggregates different series reported by different countries' national statistical agencies without standardizing methodology.

More broadly, the problem is that the OECD is dividing all the hours work by all the people who worked at least one hour — thus neglecting the important phenomenon of people who don't work at all.

Since 1990 or so, for example, the share of Dutch people who are in the labor force has soared far above the French level: 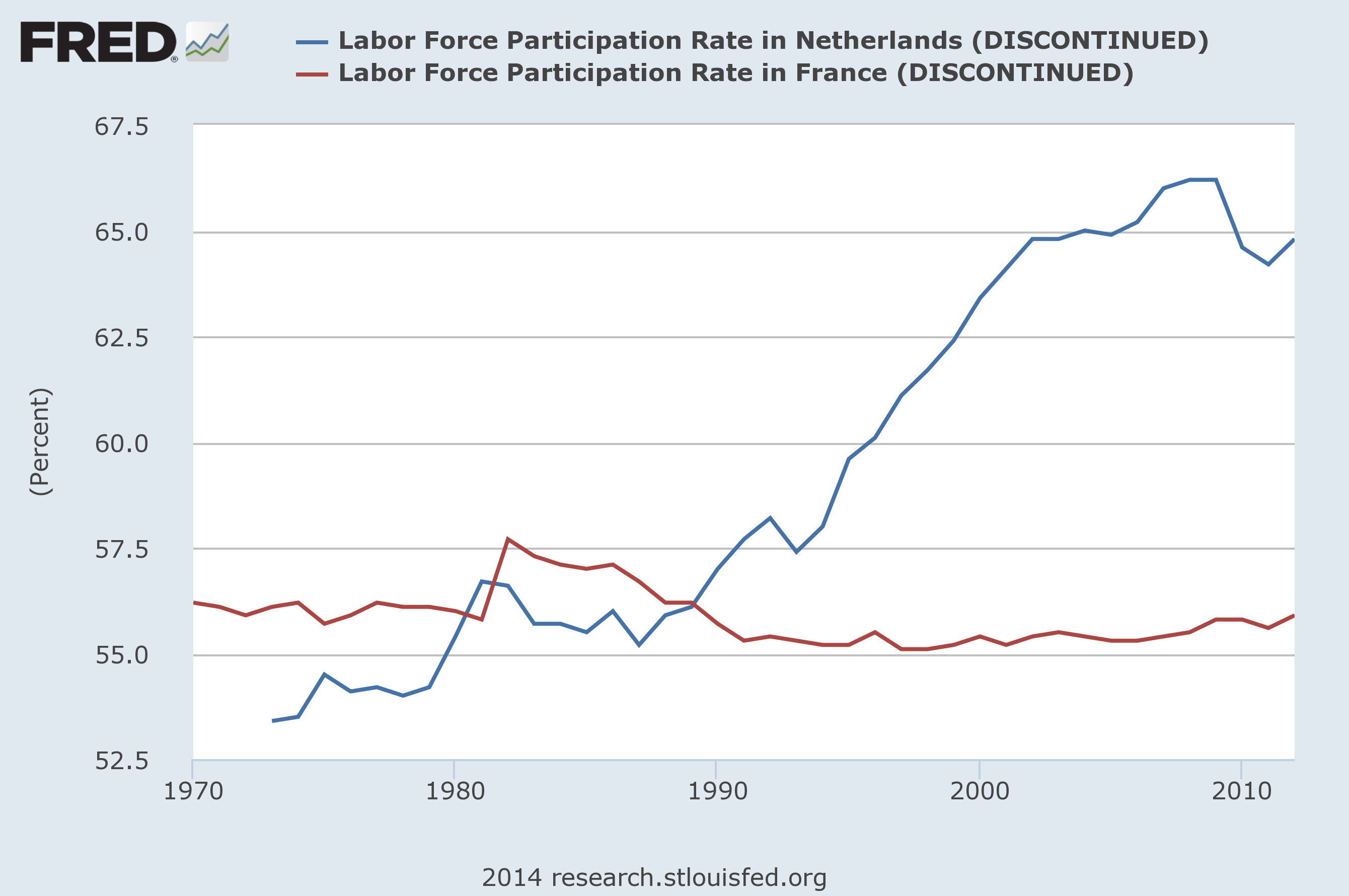 One reason for this is that the Dutch economy features lots of mom-friendly part-time jobs, so many people work part-time who might otherwise not work at all. One consequence of this is that the average Dutch worker doesn't work very much — just 30 hours a week, compared to 38 hours in France. But if you compare part-timers to part-timers and full-timers to full-timers, the Franco-Dutch gap is much smaller. The Netherlands just has more part-timers. And primarily because it has fewer non-workers, not because it has fewer full-timers.

The tedious truth is that to understand a country's work norms, you need to delve fairly deeply into demographics, and government agencies in most countries haven't made great data a priority.

Reducing average annual hours worked may be a worthy goal. But it's crucial to recognize that if it happens, it's likely to be because people are working more — transitioning into part-time work, rather than retiring early; working part-time while in college; working part-time, rather than staying at home with children — rather than working less. It's generally a sign of a flexible labor market featuring a variety of roles that don't force people to choose between a full-time/zero-work binary.

If what you're actually interested in is the amount of leisure time available to people, then you're going to need a different kind of statistic. One that measures not just paid work but also household drudgery and higher education. The United States has a pretty good survey that does just that (see our 7 charts that explain how Americans spend their time), but convenient international time-use information doesn't generally exist. We can look up average retirement ages fairly easily and see that Americans work more years than French people. But as to whether prime-age workers have more time to themselves or less, we sadly don't know as much as we'd like.