The ozone layer is on pace for a full recovery by 2050, scientists say

Share All sharing options for: The ozone layer is on pace for a full recovery by 2050, scientists say

Sometimes the world really can get together and avert a major environmental catastrophe before it's too late. A new UN report finds that the Earth's protective ozone layer is finally starting to recover — after efforts in the 1980s to phase out CFCs and other destructive chemicals.

Scientists have finally detected signs that the ozone layer is healing

Back in the 1970s, scientists first realized that we were rapidly depleting Earth's stratospheric ozone layer, which protects us from the sun's harmful ultraviolet rays.

The culprit? Chlorofluorocarbons (CFCs) — chemicals that were widely used in refrigerators and air conditioners. These chemicals had already chewed a massive "hole" in the ozone layer above Antarctica, and the damage was poised to spread further north.

Without the ozone layer's protection, more and more people would be exposed to UV rays. Skin-cancer rates in many places might have soared, as they already have in Puentas Arenas, Chile, which lies under the existing ozone hole. Those UV rays could also harm crops and the marine food chain.

Fortunately, this apocalyptic scenario never came to pass. Scientists uncovered the problem in time. And, under the 1987 Montreal Protocol, world leaders agreed to phase out CFCs — despite industry warnings that abolishing the chemicals would impose steep costs. The hole in the ozone layer stopped expanding. The global economy kept chugging along.

Now comes further good news. The latest UN assessment, conducted by some 300 scientists, has found that the ozone layer is just now starting to heal — and should be back to its 1980 levels by 2050, though there will be ups and downs along the way.

The video below from NASA describes the recovery — showing the minimum concentration of ozone in the southern hemisphere each year from 1979 to 2013. The process was sluggish: Ozone levels kept declining in the 1980s and 1990s, even after the agreement to phase out CFCs. And, in 2006, another major hole appeared. But ozone levels have recently begun to bounce back:

"There are positive indications that the ozone layer is on track to recovery towards the middle of the century," said UN Under-Secretary-General Achim Steiner in a press statement. "The Montreal Protocol — one of the world's most successful environmental treaties — has protected the stratospheric ozone layer and avoided enhanced UV radiation reaching the earth's surface."

Granted, just because the world huddled together and saved the ozone layer doesn't ensure that it'll also do the same for future environmental problems, like global warming. For one, it may end up being harder to reduce our reliance on fossil fuels than it was to curtail our use of CFCs (Dupont developed substitutes fairly quickly). But the ozone case remains the best example of international cooperation to halt a slow-moving ecological disaster. And it worked.

We barely dodged a bullet with the ozone layer 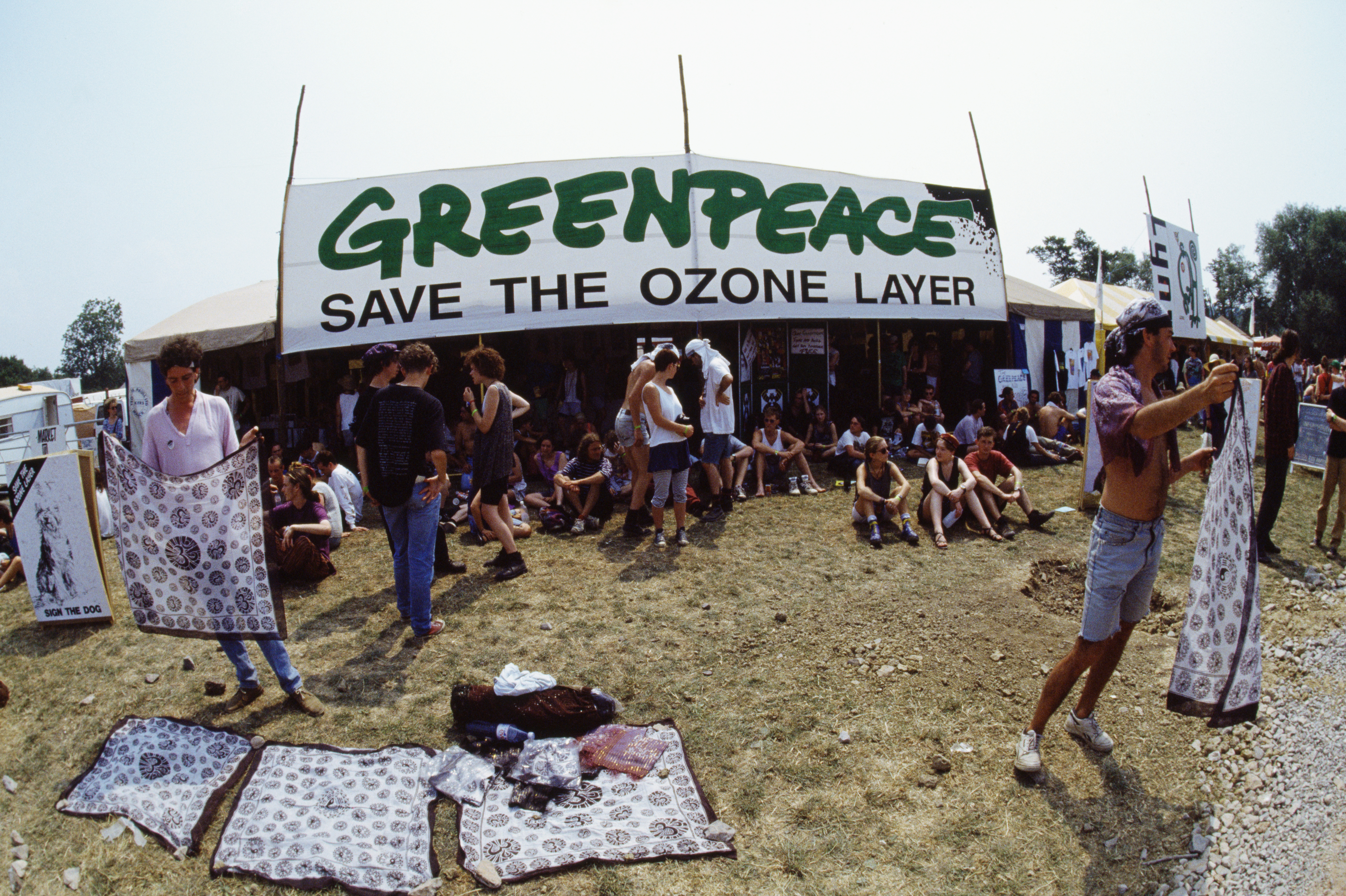 The Greenpeace stand at the Glastonbury Festival in June 1992. (Mick Hutson/Redferns/Getty Images)

It's worth pausing to reflect on what a close call we had with the ozone layer. While scientists in Antarctica first began measuring stratospheric ozone levels in 1957, it took decades to realize how dire the situation actually was. (Indeed, when researchers found signs of severe ozone depletion in the 1970s, they initially thought their instruments were faulty.)

Had Dupont used bromine instead of chlorine, we might have destroyed the ozone layer before anyone noticed

It wasn't until 1974 that chemists Mario Molina and Sherwood Rowland published a paper proposing that rising concentrations of CFCs in the atmosphere could deplete the ozone layer. But this hypothesis was difficult to prove — and it was fiercely disputed by Dupont, the world's biggest manufacturer of CFCs, for many years.

By the 1980s, scientists finally had incontrovertible evidence that CFCs were destroying the ozone layer — that's also when the massive "hole" over Antarctica received widespread attention. (This hole is a severe thinning of the ozone column throughout the atmosphere during the spring and summer.)

But we were lucky that the damage wasn't even greater by then. As it turned out, Dupont had been using chlorine instead of bromine to develop CFCs. As best anyone could tell, the two elements were roughly interchangeable (though chlorine was cheaper). And yet, as Paul Crutzen later observed in his Nobel acceptance speech, bromine is 45 times more effective at destroying ozone. Had Dupont initially used bromine, the ozone layer worldwide might have been severely depleted long before anyone noticed.

Fortunately, that didn't happen. Under the Montreal Protocol of 1987, the world's nations agreed to phase out the use of CFCs in refrigerators, spray cans, insulation foam and fire suppression. And, by and large, countries complied. Atmospheric concentrations of chlorine have stabilized and have been declining slowly over time.

In their report today, the UN panel notes that without that agreement, atmospheric levels of ozone depleting substances might have instead increased tenfold by mid-century. That, they argued, could have led to 2 million additional cases of skin cancer by 2030 — to say nothing of crop damage or other impacts.

To be sure, the ozone layer is still slowly recovering from its depletion — since there's still chlorine lingering in the stratosphere. The report notes that the Antarctic hole still appears every spring and summer, even reaching a record size in 2006. (That just underscores how long the delay was between international action and actual recovery.) And it's not just Antarctica: An especially cold Arctic winter in 2011 led to an ozone hole up north, too.

But the broad picture is encouraging: The ozone layer is on track to bounce back to 1980 levels by around mid-century.

Unexpected side effects of the Montreal Protocol

There have been, however, a few unexpected side effects of this whole affair.

A popular substitute for CFCs contributes to global warming

As a result of the Montreal Protocol, companies and countries stopped using CFCs and started using HFCs (hydrofluorocarbons) as a replacement. That seemed like a satisfying solution — at least until  global warming became a much more pressing issue in the ensuing decades.

Both CFCs and HFCs are potent greenhouse gases that help warm the planet. And, on net, swapping out CFCs for HFCs reduced the overall amount of greenhouse gases in the atmosphere — the Montreal Protocol became (unintentionally) one of the biggest moves we've ever made to prevent climate change.*

But now HFCs are becoming a big climate problem in their own right, especially as air-conditioning becomes more popular in fast-growing countries like China and India. The gas is roughly 2,100 times as effect as carbon-dioxide at trapping heat, and its use is soaring.

"Hydrofluorocarbons (HFCs) do not harm the ozone layer but many of them are potent greenhouse gases," the UN panel noted. "They currently contribute about 0.5 gigatonnes of CO2-equivalent emissions per year. These emissions are growing at a rate of about 7 percent per year. Left unabated, they can be expected to contribute very significantly to climate change in the next decades."

Some environmental groups have urged world nations to revisit the Montreal Protocol and phase out HFCs in favor of chemicals that neither hurt the ozone layer nor contribute to global warming. In September 2013, China and the United States reached their own side agreement to reduce HFC use over time. India, for its part, would rather tackle HFCs as part of a broader climate agreement than revisit the Montreal Protocol.

* Update: I clarified the last section to note that, by replacing CFCs with HFCs, the Montreal Protocol was a net benefit as far as global warming was concerned — even though HFCs are now becoming a major greenhouse gas in their own right. Thanks to Jesse Reynolds for the pointer.