Since August 31, Iceland's Bárðarbunga volcanic system has been spitting lava out of a large fissure near the Holohraun lava fields in the middle of the country.

So far, the eruption hasn't inflicted much damage on people — but it has led to some spectacular photos and images. Here's a fantastic view from space, courtesy of NASA's Earth Observatory:

Note that these aren't the same colors that the human eye would see from that distance. This image was captured by NASA's Landsat 8 satellite, which combined shortwave infrared, near infrared, and green light to create a false-color image. (If you want to see what the eruption looks like in "natural color," see here.)

And here's another shot zoomed out:

Let's get oriented: The Bárðarbunga volcano itself is further to the southeast, out of the frame of this picture, buried underneath the Vatnajökull ice cap — the largest glacier in Europe.

Back in late August, scientists first began detecting seismic activity in the vicnity of the volcano, a sign that magma was on the move. That magma eventually formed a large underground dike that extended northeast, past the ice cap, where it eventually broke through to the surface. (The lava is now erupting out of two separate fissures.)

The resulting lava fountains have been spectacular, reaching more than 165 feet high, and the lava flow itself is 10 miles long — by some accounts, this is the biggest lava eruption from a single volcano that Iceland has seen since the 19th century.

Here's another close-up picture of the eruption from researcher Johanne Schmith: 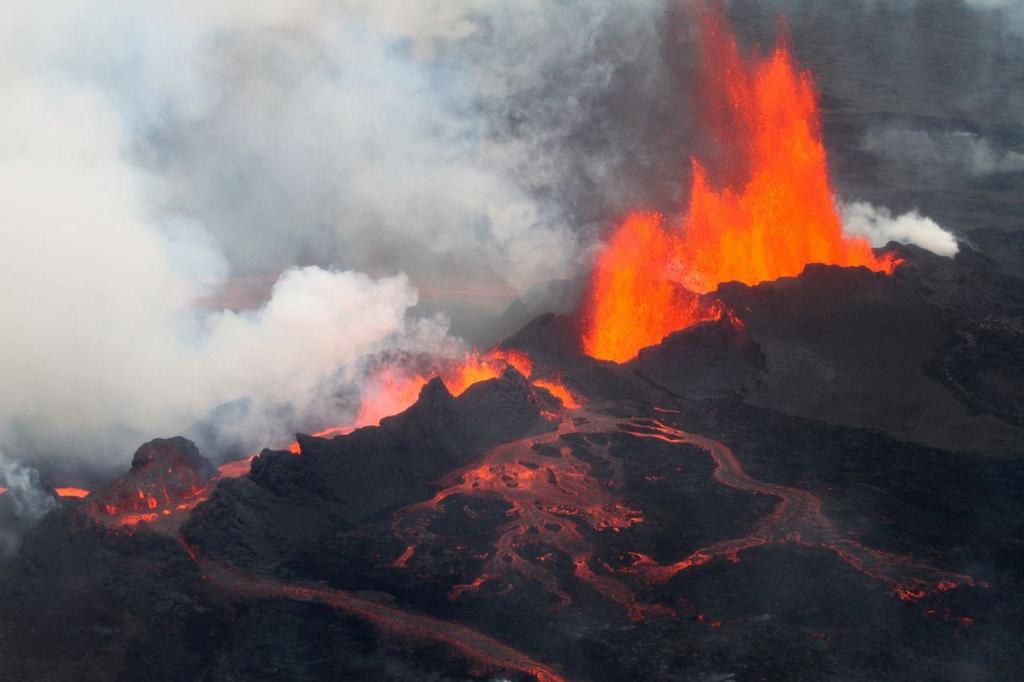 So far, the eruption itself appears to be doing minimal damage, since it's in a remote area away from homes and villages. (Indeed, the ongoing eruption of Kilauea in Hawaii is wreaking more havoc.) The biggest problem to date is that a lot of sulfur-dioxide is spewing out of the volcano — a noxious gas that can cause respiratory problems.

NASA has more details on this: "A blue haze of SO2 and aerosols has been observed downwind over several towns and villages in eastern Iceland. Scientists and other observers working near the eruption site have been evacuated several times and cautioned to keep gas masks handy due to noxious gases and shifting winds. Elevated levels of SO2 have been detected as far as Ireland, Greenland, and Scandinavia.

Could Bárðarbunga have an even bigger eruption?

This is the key question right now. Earthquakes in the region have continued. And, most recently, scientists noted that the surface of the glacier atop of Bárðarbunga's caldera has begun to sink some 65 feet.

A subglacial eruption could send up large clouds of ash, disrupting flights

That could be a sign that the volcano is about to erupt under the glacier — and, given how much magma is in the volcano's chamber, any eruption could well be large.

That would be a big deal. If a really major volcanic eruption occurs underneath a glacier, the combination of magma and ice can potentially produce a violent steam explosion that can send large clouds of ash up into the atmosphere and disrupt flights around the region. Alternatively, a large eruption under a glacier can potentially melt the ice and lead to heavy flooding — particularly in the river that extends north toward more populated areas.

Still, nothing's for certain yet. The Icelandic Meteorological Office says that any of three different scenarios could occur:

1) The caldera could stop subsiding, seismic activity could cease, and the lava flows in Holuhraun could eventually decline. Eventually, things settle down.

2) Alternatively, the ongoing lava eruption in the Holuhraun fields could eventually extend back to the glacier. When the lava reaches the ice, it could lead to an ash-producing explosion and possible flooding.

3) The caldera continues sinking and there's a large eruption at the edge of the volcano. That, the IMO notes, "would melt large quantities of ice" — leading to major flooding.

Or perhaps something else entirely will occur. As Gisli Olafsson, who is providing indispensable updates on Twitter, notes, volcanoes are full of surprises: "No need to panic though about #Bardarbunga yet — nature has its way of showing us its potential and then let[ting] us wait decades."

As always, the Icelandic Met Office has the best updates of what's going on with Iceland's volcano.

Here's a longer breakdown of why even a big subglacial eruption today wouldn't necessarily be as disruptive as the 2010 Eyjafjallajökull eruption that shut down airports around Europe for six days.