The oceans are acidifying at the fastest rate in 300 million years. How bad could it get?

Share All sharing options for: The oceans are acidifying at the fastest rate in 300 million years. How bad could it get?

"The current rate of ocean acidification appears unprecedented at least over the last 300 million years," noted a report this week from the World Meteorological Organization.

That's a big deal — and it's worth unpacking a bit further. The WMO notes that the oceans currently absorb roughly one-quarter of all the carbon dioxide that we emit from our cars, factories, and power plants each year.

That process helps fend off (some) global warming, but it also comes at a cost: As that extra carbon dioxide dissolves in water, it turns into carbonic acid and decreases the pH levels in the oceans.

This is called "ocean acidification" — and it could have terrible consequences for marine life in the decades ahead. More acidic seawater can chew away at coral reefs and kill oysters by making it harder for them to form protective shells. Acidification might also muck up the food supply for key species like Alaska's salmon. One recent study estimated that the loss of mollusks alone could cost the world as much as $100 billion per year by century's end.

Let's break down the numbers. The oceans have already been acidifying significantly, with acidity levels increasing 30 percent since the Industrial Revolution (that is, the pH of ocean surface water has dropped from 8.18 to 8.07). And when compared against proxy reconstructions of past climates, this change appears to be unprecedented in at least the last 300 million years. 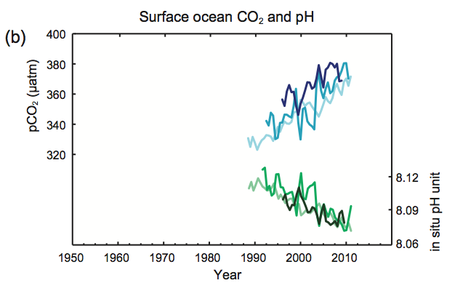 And according to the WMO's most recent report, there's no sign that this process is slowing down.

So what might acidification look like in the future? That largely depends on how much extra carbon dioxide we put into the atmosphere. Below is a map from the Intergovernmental Panel on Climate Change (IPCC) looking at what would happen if emissions keep rising at their current rate.

Darker blue areas suggest faster acidification (that is, their pH levels are expected decrease more sharply) — and the effect is greatest around the Arctic. The map also shows where key coral reefs and fisheries that might be affected by acidification are located:

Marine mollusk and crustacean fisheries and known locations of cold- and warm-water corals, depicted on a global map showing the projected distribution of ocean acidification under RCP8.5 (pH change from 1986-2005 to 2081-2100) (IPCC)

The IPCC concluded that increased ocean acidification "poses substantial risks to marine ecosystems" — particularly coral reefs and polar ecosystems. (As sea water acidifies, corals can't absorb the calcium carbonate they need to maintain their skeletons and the reefs are at risk of dissolving.)

What's more, the panel noted, acidification could affect an even wider range of species when combined with conventional pollution, overfishing, and all the other stresses we're placing on the ocean.

Meanwhile, there's one final twist: As the oceans become more acidic, they're less able to absorb our carbon-dioxide emissions. That means more of that CO2 ends up in the atmosphere — leading to additional global warming. The WMO says the ocean's ability to take up carbon is just 70 percent of what it was back before the Industrial Revolution. That capacity is expected to shrink to 20 percent by the end of the century.

Tallying up the consequences of ocean acidification

Pteropods are small calcifying (or shelled) organisms that live as zooplankton in the water column and are an important prey species for many fish. Changes in ocean chemistry can break down their calcium carbonate shell, ultimately leaving the marine food web at risk. (NOAA)

So how worried should we be about all this? As the IPCC concluded, acidification due to climate change has had relatively few impacts on ocean life so far. Most scientific research in this area is to try and figure out the future consequences.

'When it comes to how ecosystems might react, that's big and complex and messy'

There are a wide range of views on this question. Some studies have warned that future ocean acidification could cost the world trillions of dollars per year as coral reefs die off and fisheries dwindle. Yet other researchers have suggested that some (though not all) coral reefs and ecosystems might remain surprisingly resilient.

"We understand the physics of simple things like how oceans become acidic," Richard Norris, a paleobiologist at Scripps Institution of Oceanography, UC San Diego, told me in an interview last fall. "But when it comes to how ecosystems might react, that's big and complex and messy, with all these interactions going on, both physiological and how organisms interact with each other."

Scientists have a few different ways to study the impacts of ocean acidification. First, they can look at how various species respond to more acidic water in a lab setting. That's how they can tell that acidification can disrupt sharks' ability to hunt for food. Or that mussels may lose their much-needed ability to cling to surfaces in more acidic waters. The main drawback with these studies, however, is that ecosystems in the real world may respond differently than they do in controlled lab settings.

Alternatively, scientists can sift through the fossil record to see how broad ocean ecosystems responded to real-life bouts of ocean acidification in the past. About 55 million years ago, carbon-dioxide levels in the Earth's atmosphere spiked (for natural reasons), leading to the Paleocene-Eocene Thermal Maximum.

In a 2013 study for Science, Norris and his co-authors found that this prehistoric world had few coral reefs, poorly oxygenated oceans, and a food chain that had difficulty sustaining large predators. Not good. On the bright side, there were relatively few mass extinctions:

But even this isn't a perfect analogue. Among other things, the rate of ocean acidification today appears to be even faster than it was back then — and there are other stresses on marine life, like overfishing or pollution. So the impacts could be very different.

Another 2013 study in Nature Climate Change analyzed both lab studies and historical data and concluded that the overall effect on corals, molluscs, echinoderms, crustaceans and ﬁsh was likely to be negative overall, even with moderate acidification. That study wasn't entirely negative, though — it did suggest that some fish species might be able to adapt surprisingly well.

Research in this area is still ongoing. What we can say for sure is that that the oceans are hugely important. The average person eats about 42 pounds of fish per year. Coral reefs provide tens of billions of dollars in economic value, from sustaining fisheries, boosting tourism, and shielding coastal areas from storms. And right now we're running an unprecedented experiment on those oceans.

The Smithsonian has an excellent guide to the chemistry of ocean acidification and its precise effects on coral and other marine life.

Also note that carbon-dioxide levels in the atmosphere rose at a record pace in 2013.