This is what the Nile, Dubai, aurora borealis, sandstorms, and more look like from space

Share All sharing options for: This is what the Nile, Dubai, aurora borealis, sandstorms, and more look like from space

Photos of the Earth taken by astronauts and posted to social media have become a mainstay of online media, even a cliché. Still, no matter how many you see, they can still be surprisingly powerful, both for their simple, stark beauty and for their ability to show you a familiar thing in a novel way.

Here, then, are some of the photos and vines posted by American astronaut Reid Wiseman, who arrived at the International Space Station in May for a six-month mission. Photos from the ISS can be especially stunning, as the proximity to the Earth makes the atmosphere and the curvature unusually visible. The sharp angles can cast well-known landmarks like Baja or the Greek isles in steep angles.

The Nile meets the Mediterranean 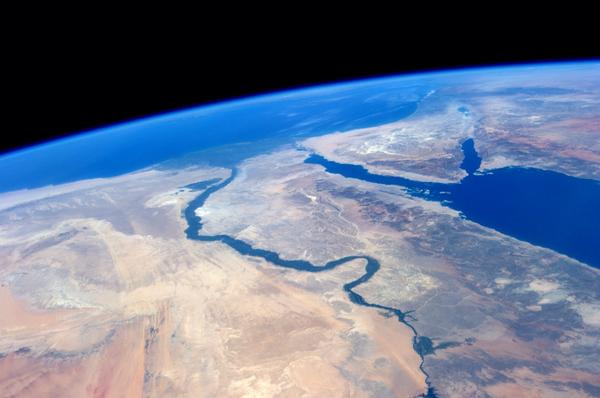 To start, here is my favorite from Wiseman's photos. The Nile River flows north up Egypt to the Mediterranean Sea at the top of the image, with the Red Sea and Sinai Peninsula on the right. You can just make out the Suez Canal, the man-made, 120-mile waterway that connects the Red and Mediterranean Seas. I love this photo for how clearly it shows the Nile's grandeur — the river has for thousands of years been the heart of Egyptian civilization — as well as the scale of Suez, which took 10 years to build.

Italy, and lightning over the Balkans

A timelapse of the view over Europe and Asia

Europe on the left, Africa on the right

That's the strait of Gibraltar, the entrance from the Atlantic Ocean (bottom) to the Mediterranean Sea (top). Spain is on the left and Morocco on the right; this little strait has been a crucial point of economic and strategic focus for centuries.

A lightning storm over Houston at night

For all its size, the dam looks like a toy from space.

That's Britain at the bottom and, beyond it, Ireland, viewed from the east. Unsurprisingly, both are covered in clouds.

Dice float over the Earth

"A simple toy from my childhood makes for a cool picture in space," Wiseman tweeted this just a few days after arriving at the ISS. It's easy to see why he loves the photo so much.

Turkey, Greece, and the islands in between

One of the world's most storied centers of civilization, and a place with so much history. We think of Greece and Turkey as very distinct places today but this photo helps to show why that was not always the case.

You can even see the ridiculous, artificial island resorts jutting out into the sea.

An aurora viewed from above

Auroras are lights that occur in the atmosphere caused by solar winds and the geomagnetism of the Earth. This is what they look like from above.

The aurora in motion

A volcano blown by wind over time

The border between California and Mexico

That's San Diego on the left and Tijuana on the right. The bright yellow line is the border.

The moon rises over the Earth