Share All sharing options for: Please Like Me is the hilariously awkward coming-of-age TV show you didn’t know you needed

As a soon-to-be 21 year-old Josh (Josh Thomas) sits across from his girlfriend droning on about his melancohlic outlook and body dysmorphia, a waitress brings the couple an overpriced sundae. "Why can't I ever just let myself properly enjoy things?" Josh asks. "All I can think about is my rubbish face."

His girlfriend, Claire (Caitlyn Stasey), quietly listens to her boyfriend's soliloquy, finally interrupting him. She thinks it's best if she and Josh break up because they've drifted apart. "Also you're gay," she adds. Josh, taken back, assures her she's wrong. "Josh," she says, "you're probably gay."

That was the hilarious cold open of Please Like Me, a half-hour Australian sitcom created by and starring 25 year-old comedian Josh Thomas. Thomas's career in comedy is impressive, especially given his young age. At 17, he was the youngest comedian ever to win Melbourne International Comedy Festival's RAW Comedy Award. Two years later, the Festival gave him its Best Newcomer Award for his stand-up routine titled "Please Like Me."

The comedy of this routine later became the basis for the Australian series of the same name, whose second series premieres tonight at 10:30 p.m. Eastern on Pivot — a new television network billing itself as the one millennials should watch if they want to "make a meaningful difference in the world." (Hold for explanation as to how precisely that works.)

The premise of PLM has its fair share of tropes. At the encouragement of his father (David Roberts) — who, by the way, dates a much younger woman from Thailand — Josh moves in with his middle-aged bipolar mother (Debra Lawrence), essentially to babysit her after a botched suicide attempt. His giraffe-loving best friend, Tom (Thomas Ward), is likeable and nerdy and ends up in falling for Josh's ex. And Josh's religious Great Aunty Peg (Judi Farr) comes around almost daily to take care of his mother, lecture him about church attendance, and inquire about the size of his testicles.

While some of the plot devices and character choices can be predictable, the overall feel of the show is anything but. Please Like Me might play with stock television conventions, but you're probably not going to turn the channel out of boredom. The series manages to ably balance predictability with out-of-leftfield punchlines in a way that leaves you both laughing out loud and looking around the room to make sure no one sees you laughing out loud. The comedy is smart, and it's also really, really inappropriate. But it isn't cringe-worthy — the characters are too cuddly for that. 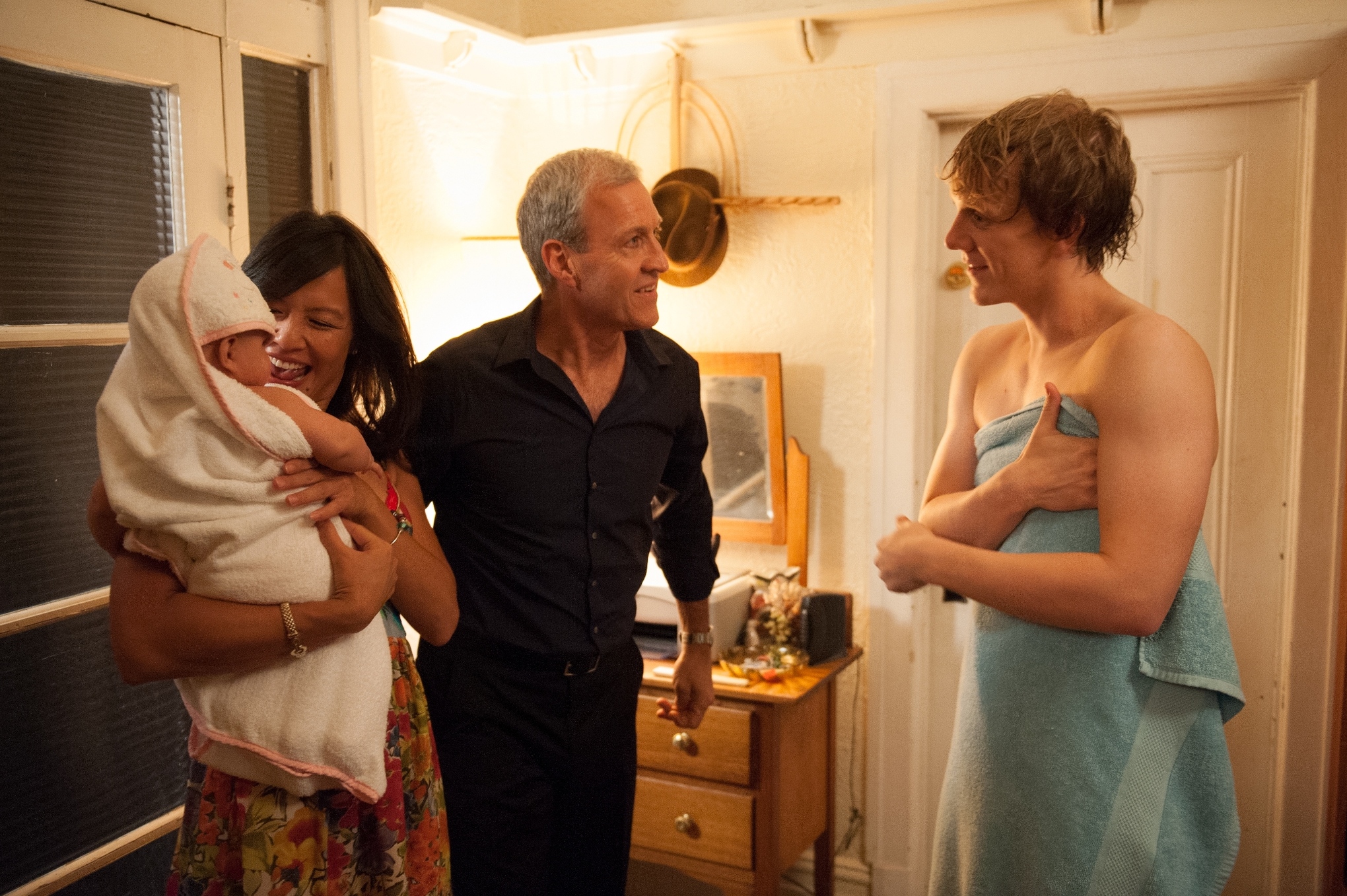 Take Josh, for example. In many ways, his brooding, deadpan sense of humor is probably off-putting to many people, as is his lack of filter. He's also awkward and lanky. Right off the bat, let's just note how refreshing it is to see the leading male of a gay coming-of-age series being played by someone so delightfully average.

PLM even writes Josh's "pear-shaped" body — as his Aunt Peg describes it — into its story. If we're well aware of how Josh doesn't live up to bogus Hollywood aesthetics, Josh himself knows that even better than us. And it affects him deeply, as we learn several times throughout the first season. After ending up in his bedroom with a young, semi-nude gay man named Geoffrey (Wade Briggs), Josh awkwardly attempts to undress in a cramped space behind his dresser while using the bedroom door to obfuscate the body he is ashamed of. (In tonight's second season premiere, Josh's body issues come up again.)

But if Josh is embarrassed by his body, Josh-as-writer certainly has no qualms about baring Geoffrey's body whenever possible. Indeed, we even watched him brushing his teeth naked last season, the camera fixed on his muscular backside as it pulsated in rhythm with the movement of the toothbrush.

The camera's glimpses of muscles, though, aren't gratuitous. As everyone — including himself — is well aware, one of the only reasons Josh kept the pensive, hyper-emotional Geoffrey around was because he was pretty and he liked his body. Josh's relationship with his first boyfriend, then, is an echo of the show's central theme: Josh wants to be liked by a boy who looks like Geoffrey. Please like me, he seems to be thinking every time Geoffrey undresses. But when Geoffrey asks the same thing of Josh in more clear terms — for instance, by inviting him to take an interest in the things he liked, like rugby — his plea isn't obliged.

Josh doesn't only need the approval of potential partners — he also really, really wants his parents to like him. Granted, he isn't sycophantic about it. He has no problem with defiantly shrugging off his father's suggestions or lecturing his mother. But at the end of every episode, you get the sense that he is, if only secretly, happy that he gets to love the family that misunderstands him. Josh's relationship with his parents really is tense. His parents are divorced, and though his father has happily found love again, he is still manipulated into taking care of his ex-wife out of the guilt he feels for leaving her. Like many children of divorced couples, Josh finds himself bearing the brunt of his parents' dysfunctional relationship: both parents come to him individually to talk with him about the other.

But if he's estranged from his parents in certain ways, in other ways, the relationship is too enmeshed, and that's where some of the show's darkest comedy comes from.

During a visit to his hospitalized mother, Josh shares a box of chocolates with her and two of her friends. When there is only one left, his mother decides they should play "that game from the film [Notting Hill] ... where the person with the saddest story gets the last treat … whoever has the worst losing your virginity story gets the chocolate." She then tells her son he should go first.

The final contestant to go says she knew she was going to win the game the whole time because, well, she lost her virginity when she was raped. While Josh and his mother offer their apologies and cede the remaining chocolate to her, the other contestant who'd already gone butts in and says that she's been raped, too. She didn't make the confession earlier because she "didn't know rape counted." Josh asks if she's being honest because it seems like she just wants the chocolate. 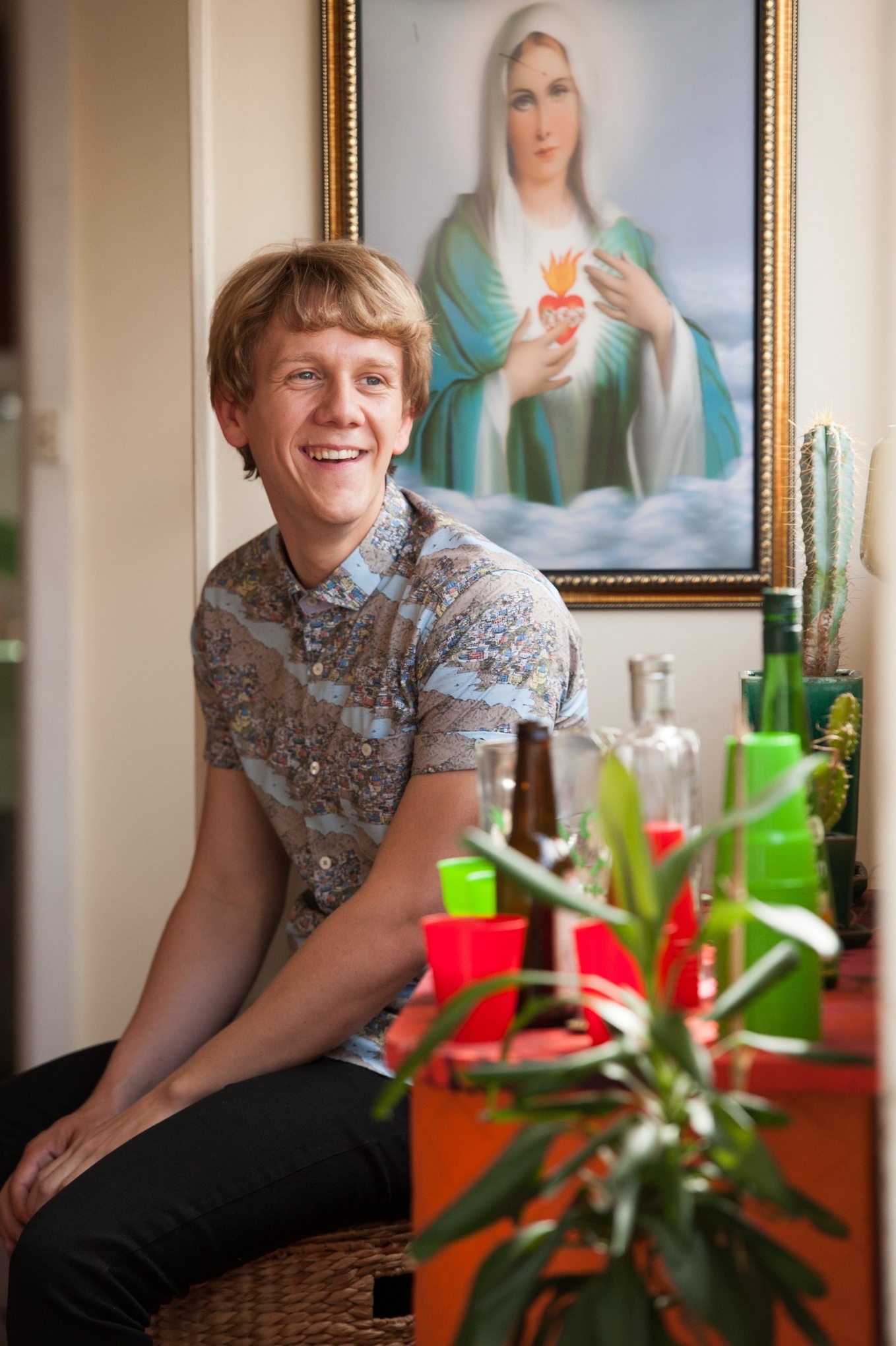 Obviously, this begs a discussion about what kinds of subjects are taboo for comedy. Some might say this show crosses the line sometimes. But though critics sometimes claim that the context of a joke doesn't matter when it comes to certain topics, Please Like Me proves these critics wrong. When the subject of rape is broached in the hospital, both Josh and his mother respond appropriately by expressing their shock and compassion. The character who voices the punchline was herself an unreliable speaker, and certainly isn't someone through whom the writers' morality was being voiced.

One of the strongest points of the series is its ability to discuss contentious topics — rape, abortion, body dysmorphia — in a way that doesn't sacrifice either the believability of the young characters or the gravity of the topics being worked through. On the other hand, the show suffers a bit when it momentarily lapses into moralization. For example, it seems out of place to have Aunty Peg interrupt her pastor during a sermon and deliver a wide-ranging lecture to the entire congregation on LGBT issues. Thankfully, though, that is one of the only times the series retreats into didacticism.

You get the sense when watching PLM that the series is one gigantic comedy experiment for Thomas. The shift in tone from the first to second season is evidence of this. Without losing the lighthearted simplicity of season one, the new season improves upon it and comes into its own. This, no doubt, has a lot to do with the fact that Pivot recently put its brand — and money — behind PLM. (It only aired season one as an Australian acquisition, but actually co-funded season two.) But it also has to do with Thomas' own growth as a writer.

As a young comedian, Thomas is new to writing for television. He's learning what works well and what works even better. The show has always been very funny, but the writing of season two tightens up what was already there. Also, because we know the characters a little more at this point, the punchlines seem more rewarding. Last season when Josh trailed off at the end of the line, we laughed because that's a funny thing to do. This season when he does it, we laugh because he's the one doing it and that's such a Josh way to say a line. It's the same thing with the relationship between Josh's mother and his father's girlfriend. Their comedic interactions are even funnier now that we understand how exactly those two characters normally interact.

Thomas's ability to squeeze every last drop of laughter out of something as bizarrely mundane as a frog costume is uncanny. He's keenly aware of how to write and deliver a line in such a way as to maximize the awkwardness of the situation. (He does occasionally fall back on delivering his punchlines with the same cadence, but still, it works for this show.) He knows that, after all the jokes about chlamydia and penis size are over, what we really want to see is a story with a heart. That's definitely something Please Like Me has in plenty. After all the ups and downs of Josh's relationship with his mom, and immediately after yet another suicide attempt, Josh brings his mom to the bedroom and tucks her under the covers. The last shot of the first series shows a loyal son lying on the floor next to his mother's bed ready to offer her any support she might need.

You might not love this show at first. It is sometimes awkward, and sometimes funny, and sometimes predictable — just like its leading man. But if you don't love it, that's OK. Like its leading man and despite its title, Please Like Me isn't asking for your love. At the same time, if you do give the show a chance, you just might find yourself slowly, eventually, and against your better judgment, falling in love with the most unlikely of people.