Colorado legalized marijuana in December 2012, but legal sales did not begin until January 2014. It's possible the beginning of sales could affect teen pot use differently than the mere legalization of possession, but that wouldn't show up in the 2013 numbers released on Thursday, August 7.

About 20 percent of teens surveyed by the Colorado Department of Public Health and Environment (CDPHE) said they had used marijuana in the past 30 days in 2013, down from 22 percent in 2011. The survey also found a decline in reported lifetime use, from 39 percent in 2011 to 37 percent in 2013.

CDPHE said the declines were not statistically significant. But previous data suggests the drops are part of a longer-term trend that began even before Colorado voters approved the legalization of medical marijuana in 2000. 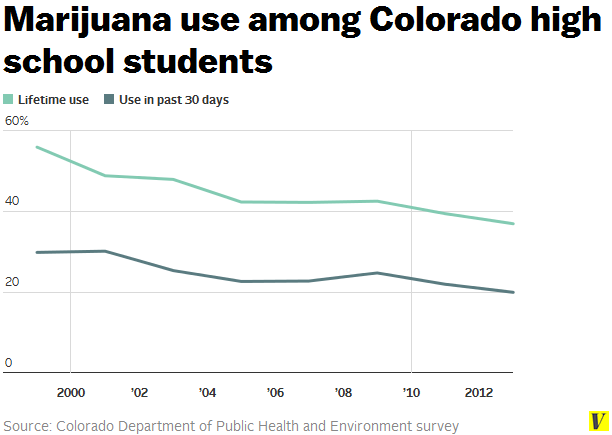 Colorado's overall use numbers are also lower than national rates. About 23.4 percent of high school students across the country reported using marijuana in the past 30 days in 2013, according to Centers for Disease Control and Prevention data. And 40.7 percent admitted to trying marijuana during their lifetimes.

Although marijuana is considered relatively safe compared to other drugs, some studies suggest it could have detrimental effects on teen brain development.

The data comes as a bit of a blow to critics of relaxed marijuana laws. Opponents of Colorado's legalization measure argued it would increase teen pot use by increasing access to the drug. Supporters of legalization claimed teens already had ample access to marijuana through the illicit market, and a legal, regulated system could better prevent adolescent drug use.

Some drug policy experts say cultural and socioeconomic factors play a bigger role in drug use rates than drug policy. Colorado's experience so far might provide the latest evidence for that theory.