Daniel Radcliffe is disappointed that rom-coms got lazy

Share All sharing options for: Daniel Radcliffe is disappointed that rom-coms got lazy

In the three years since the Harry Potter movie series ended, Radcliffe has tried a little bit of everything. He's been in Broadway plays, sung in musicals, gone dark with a ghost, and channeled Allen Ginsberg. And come Halloween, he'll be in Horns, a dark, supernatural thriller.

"I think there's a trend in society and film, for men not to be vulnerable."

But it's Radcliffe's performance in What If, a charming and winsome romantic comedy opening this weekend, that has him doing something for the first time in his career: he'll be playing a someone a bit more relatable to all of us, a burned-out millennial with broken dreams and a broken heart.

I caught up with Radcliffe over the phone and got to ask him about his first foray into the rom-com genre, playing opposite Zoe Kazan, and how Elvis's digestive system became an integral part of the movie.

Alex Abad-Santos: Is it a relief playing someone without distinguishing forehead features?

Daniel Radcliffe: Yes, distinguishing forehead features, or eyewear. It's definitely been nice. Because I remember when the photos of me playing Allen Ginsberg came out, and I was in completely different glasses than Harry Potter wore, everyone was like, "He's wearing Harry Potter glasses."

But really, it's very nice to play a contemporary part. I've never played a contemporary part before this film. Harry is sort of contemporary, but it's such a heightened reality that it's not really our world. It's just lovely to play someone who's alive today with no magical powers or nothing like ghosts or anything like that.

AS: I read your interview with the Los Angeles Times and noticed that you mentioned that you weren't a "typical romantic lead." What's that mean exactly?

I think it's just because I'm like, 5'5".  I think that is literally it. I'm shorter than the average male lead. But that's not really true. Dustin Hoffman is tiny. Tom Cruise is little. There's loads of people who are sort of short with big heads, who … work on camera. I honestly don't know.

I think these [characters like Wallace in What If] feel like more fleshed out real characters. I think that sometimes you get used to going to the cinema, and even though it's not a fantasy film, it is slightly removed from reality by one step. And there's a slight sort of dashing quality some men try to achieve, which is not like how most of us are most of the time. I guess I tried to play him as real and normal as I could. And maybe that's what people mean when they say I'm not the usual male lead.

AA: Male protagonists are over-represented in a lot of genres. But that doesn't seem to be the case in romantic comedies. Why is that? 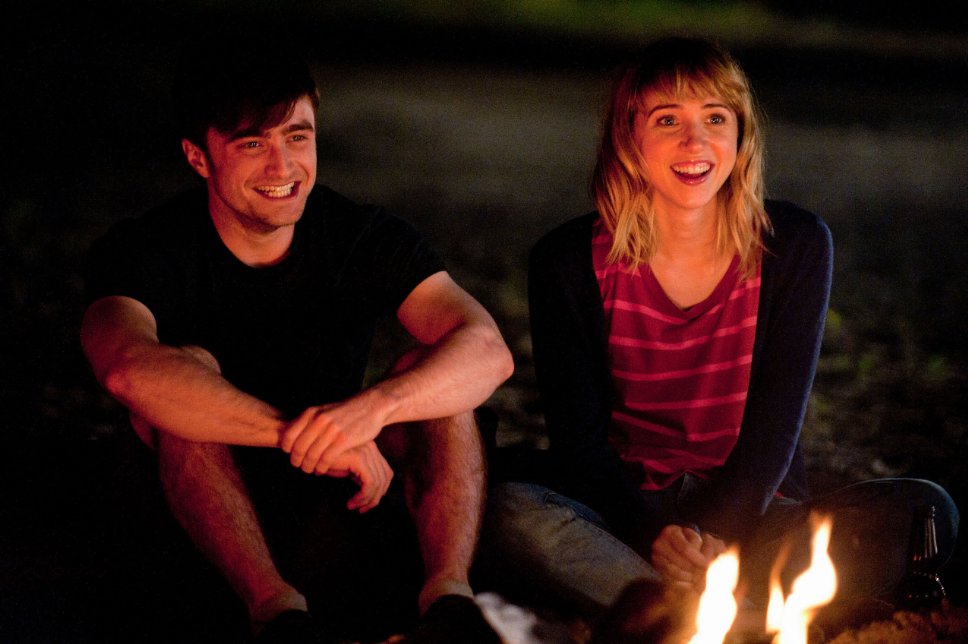 A scene from What If (F Word Productions)

DR: If you're gonna tell the story of men in a romantic comedy, then you have to, at some point show them as being vulnerable. And I think there's a trend in society and film, for men not to be vulnerable and not to be seen as that. And, in romance, men get hurt. We don't see that story told as much, and I have no idea why. It happens a lot. Men are equally affected by this stuff.

I'm glad you picked up on that, and I hope it's one of the things that sets the film apart from other romantic comedies. If you're a girl, you can take your boyfriend to it knowing that he will actually enjoy it. There will be something in it for him as well. It's a very balanced movie.

AA: Romantic comedies don't always have the best reputation. And when you ask people about good ones, they usually name films from 10 to 20 (or even 30) years ago.What do you think What If is trying to say about the genre?

DR: I don't think we're trying to say anything about the genre or make some grand point about it, we're just trying to make a good film. I think the thing about romantic comedies is that people get lazy. People forget that you have to write characters that you're really invested in.

The plot of our film is very traditional and very orthodox in some ways. What makes it good and what makes it really fun to watch for people are that the characters are really entertaining, and they're characters you really like and root for. And I think that's what has sort of slipped by the wayside in recent years. People get lazy and think that if you put two vaguely pretty people together in the same shot and write a couple of jokes, then you have a romantic comedy.

But I think that's not true. And people need something else. There's a lot of films out there are disposable in a way. You see them for an hour-and-a-half, leave the cinema, and never think about them again. They're quite pleasing for that hour-and-a-half, but they don't quite stick with you. That's what I think is, hopefully, different about our film. I hope that it is very fun and you're laughing the whole way through, but in the end, you have an emotional impact. 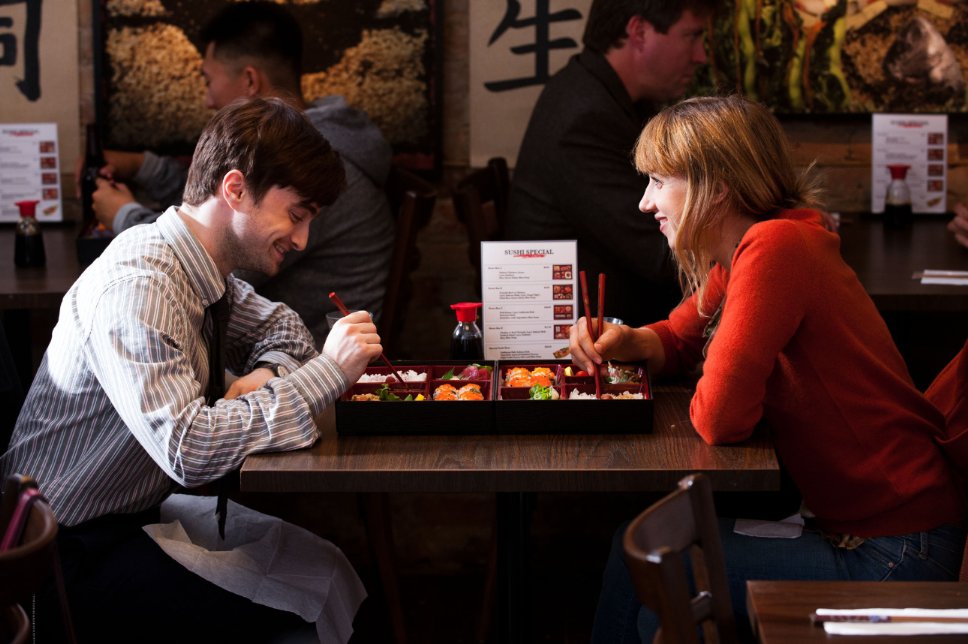 A still from What If (F Word Productions)

AA: One of the film's strong points is its dialogue. It doesn't hit you over the head with being too precious, but it's also very smart.

DR: Yeah. It's not painfully kind of witty. I know what you mean. Sometimes, with these films, you think no one's that funny and quick in real life, and you're like, "Let's just slow it down a bit."

I love the dialogue in this movie, and that's one of the first things that attracted me to it. The fact that we were all allowed to improvise quite a lot also made our own sense of humor come out even more in our characters. It's why that first scene in the diner between me and Zoe, where we're discussing, well, the state of Elvis's colon when he died and me using the phrase "shit locket." A lot of that was improvised, and yeah, I think that scene is a lovely moment. That's one of my favorite scenes in the movie.

DR: Yeah! That was a phrase I did coin by the way. I'm very proud of that.

AA: You've been doing a lot of projects since Harry Potter. From Broadway, to horror, to period pieces, you've been playing in a lot of genres. What have you found in romantic comedies?

DR: It was the comedy side that I never really worked in before. Certainly, I've never done any sort of comedic improvising before. That was hugely fun.

I had a really good time. It was a fun film to make. And that imbues the film with that kind of fun. I was having this discussion with Zoe the other day, like "Do you think we would have been able to make this film as good if the crew and the cast all hated each other?" And I just don't think there's a way that this film turns out the same and as well if that was the case. We had such a blast on it.

AA: Food plays a weird role and sometimes symbolizes love in this movie. What is the one dish that someone could make to show you they care about you?

DR: I hesitate to say this in case I get a lot of really greasy packages in the mail. Poutine is the dish I discovered in Canada. That would be a very, very quick way to my heart.

AA: A lot of the movie is spent on "Fool's Gold", a strange sandwich consisting of bacon, peanut butter, jam, in a loaf lathered with butter and then baked. Did you actually try the Fool's Gold?

DR: Yeah. Totally. I liked it. I really enjoyed trying the Fool's Gold. I couldn't wait to try it. Zoe grew up in LA, so she has a different relationship with food than an English person has with food. I see something covered in grease and butter and go, "Yeah, that's totally food." And she looks at it and goes, "No stomach should ingest it."

I arguably had more fun watching her eat her one slice than I did eating my four.

AA:You, Zoe, and the cast really seem like you guys had a lot of fun on this.

DR: Me and Zoe are very similar. We have the same kind of references. And we're both quite nerdy and read a lot. Our sense of humor comes from a similar place, where we try and make each other laugh with a play on words. It's testament to the casting department, the movie, and Michael Dowse, the fact that me and Adam [Driver], Adam and Mackenzie [Davis], Megan [Park] and Zoe, Zoe and I — all those relationships seem so authentic and real and work so well, and none of us had ever met before. Me and Zoe met once years before, but not properly. So it's really a testament to the casting department getting it absolutely right.

What If opens in theaters today.