Share All sharing options for: These charts show how social media makes the Israel-Palestine debate worse

Everyone who's ever spent time talking about the Israeli-Palestinian conflict, especially on social media, knows that it's hopelessly, miserably partisan. A new study of tweets during the Gaza conflict — and the gorgeous visualization of its results, posted below — suggests one deceptively simple reason why that's true: the two camps are operating from totally different sources of information.

Gilad Lotan, the chief data scientist for the venture capital firm Betaworks, was curious about how, exactly, the social media conversation on the Gaza war worked. He used the July 24th attack on a UN Relief and Works Agency (UNRWA) school/shelter in Beit Hanoun as a test case, scraping Twitter between July 25th and 30th for any tweets mentioning "UNWRA or related words." He wrote up his findings in an extremely popular and interesting post on Medium.

You might notice something strange in Lotan's methodology. Rather than searching for the correct acronym, "UNRWA," Lotan searched only for UNWRA, a non-standard but nonetheless commonly used alternative to the official acronym. Regardless, it means his initial findings — widely cited around the internet— were based on incomplete data. After contacting Lotan about the acronym, he re-ran his analysis, including both acronyms and expanding the time period analyzed. Here, for the first time, are the complete results, which he's generously shared with Vox.

The visually engrossing chart below shows all major accounts tweeting about UNRWA or UNWRA over a recent 10-day period. The lines between them indicate interactions; the dots that are close together form a "cluster," which Lotan says show the degree of connectedness as measured by a statistical algorithm examining rates of interaction on Twitter. Unsurprisingly, you see two huge clusters — one pro-Israeli (in blue), the other pro-Palestinian (in green). 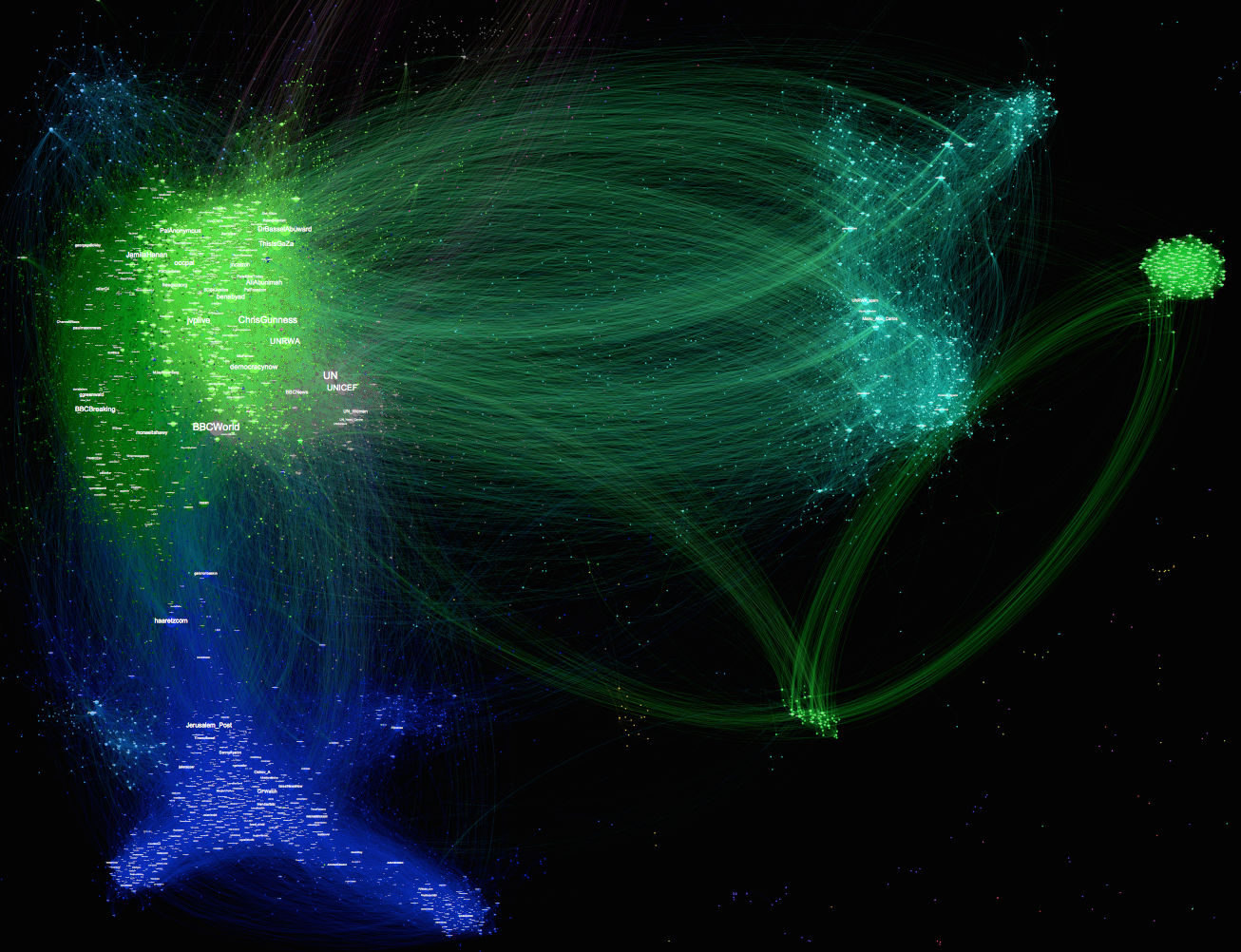 You'll also notice two clusters off to the right: those are almost all tweets in languages other than English. The kidney looking thing is largely Spanish, including the Spanish-language UNRWA account. It links up somewhat with the pro-Palestinian cluster. The other is Farsi. Lotan says that one is "most likely an Iranian bot-net (fake accounts) — based off of the structure of the cluster, and the profiles themselves."

The main pro-Israel and pro-Palestinian clusters 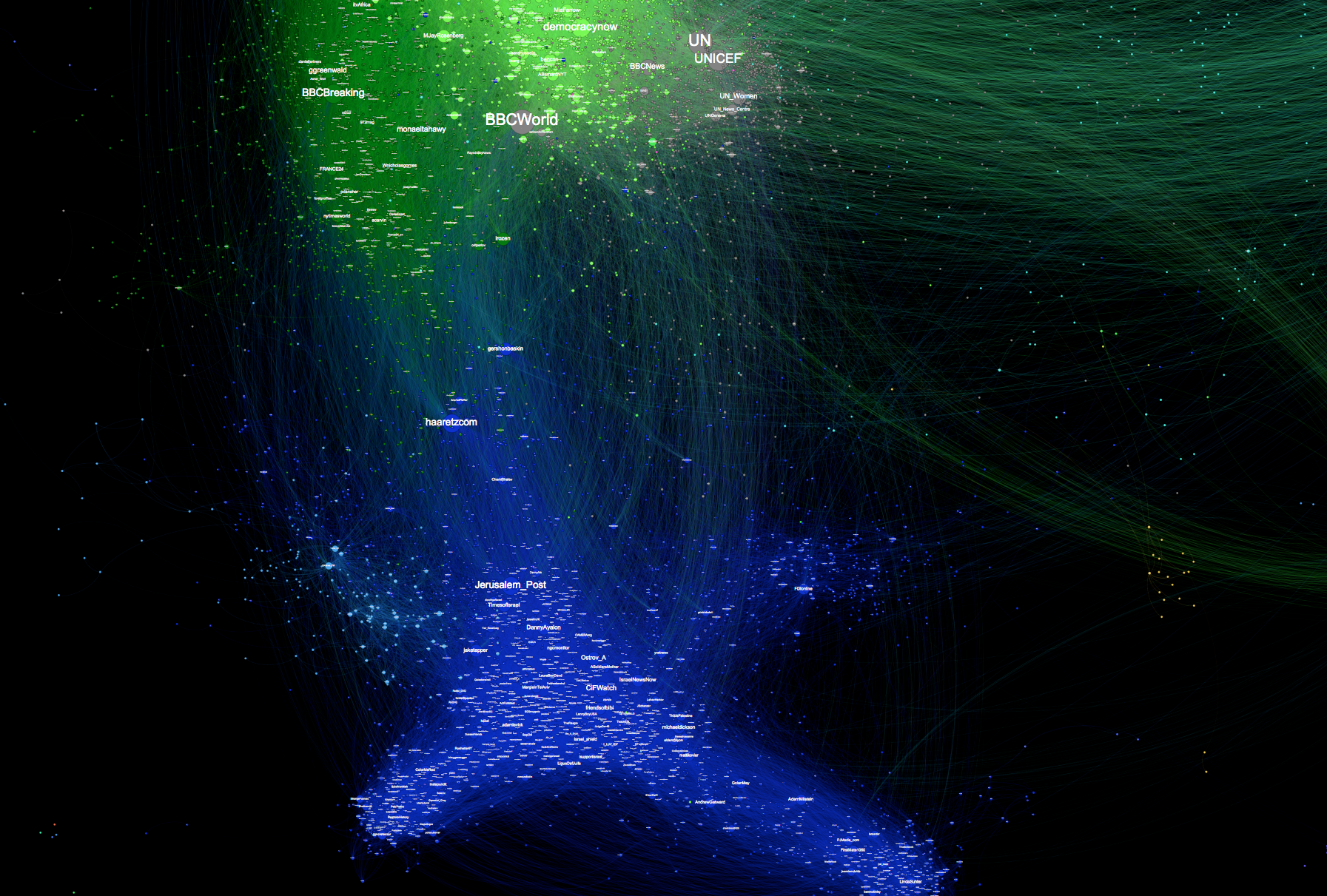 The most important thing here is that these clusters exist at all. Lotan's research suggests strong evidence that pro-Israel and pro-Palestinian partisans barely talk to each other on social media, indicating that they're getting their information about the conflict from entirely different sources. Instead of using the same "neutral" sources of information and interpreting differently, pro-Israel and pro-Palestinian partisans are just starting from different baselines. Here's a zoom on the pro-Israel cluster; you can see Israeli and right-leaning media sources in there: 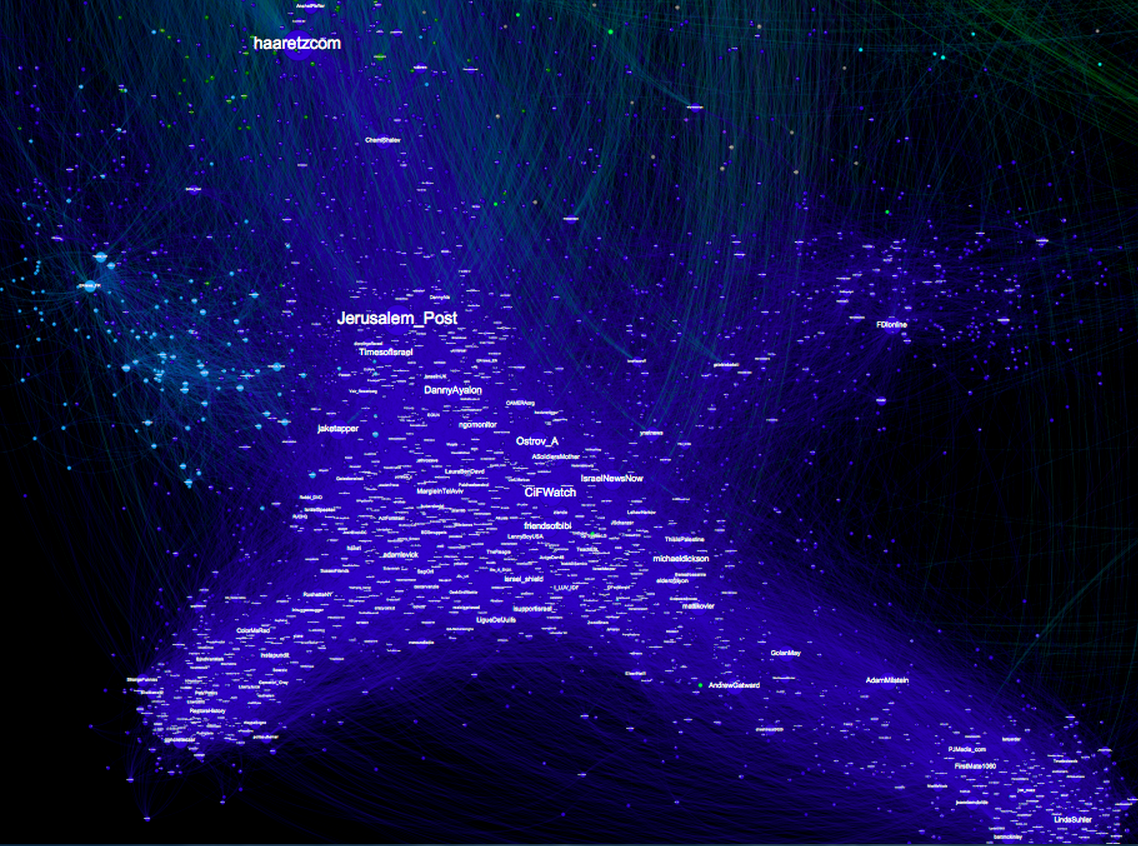 And the pro-Palestinian cluster, which includes a number of Western mainstream and left-leaning sources: 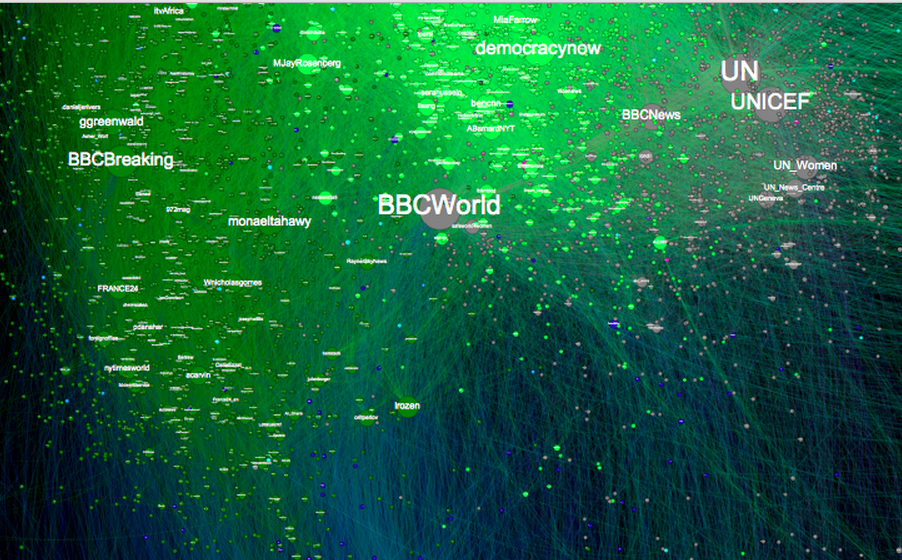 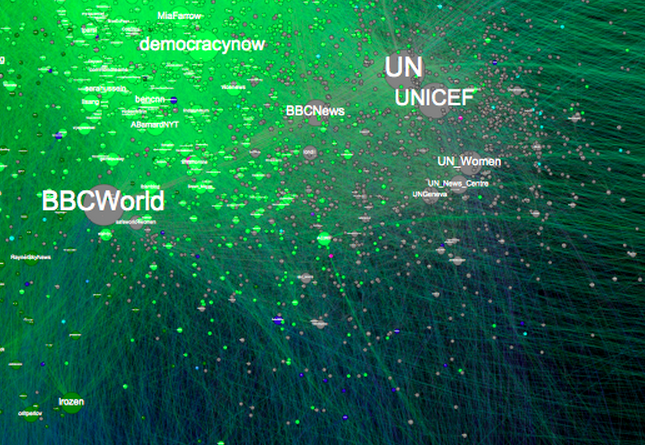 Interestingly, major media organizations and official UN accounts (mostly in grey) are clustered near the pro-Palestinian side. That suggests that the folks embedded within the pro-Palestinian twitter community are interacting far more with mainstream media Twitter accounts than pro-Israel ones are.

That could be, as Lotan suggests in his original post, evidence of media bias against Israel. Or it could be a result of the fact that Lotan based his chart on a study of how people discussed the bombing of a UN school in Gaza. Straight news write-ups of that particular event that fit much better with the Palestinian narrative of the conflict ("innocent Palestinians killed at a UN shelter") and thus got more discussion on the pro-Palestinian side.

It seems plausible that, had Lotan instead examined tweets about Hamas rockets fired into Israeli towns, we would see the mainstream media accounts clustered with the pro-Israel tweeters because they would have more fully engaged with those news reports.

The two big exceptions in the middle

Here's a chart of the middle area, which shows accounts that get engagement from the pro-Israeli and pro-Palestinian side. You'll notice it's pretty empty, but there are two big poles in there: Ha'aretz and Gershon Baskin: 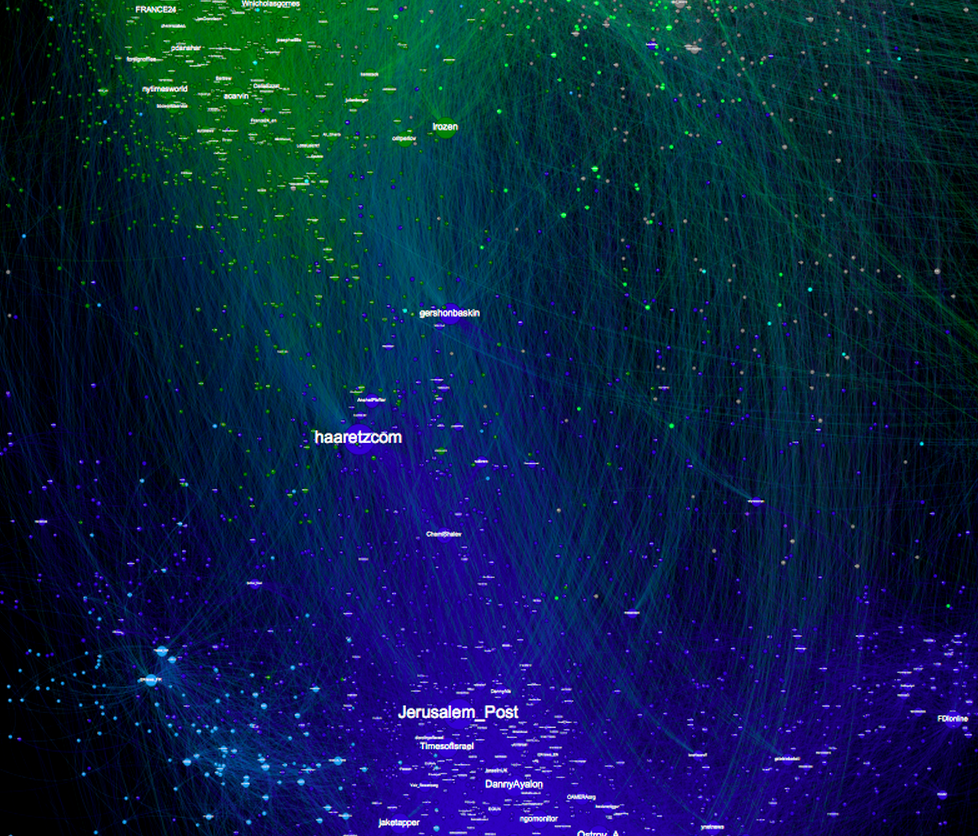 Ha'aretz is a widely respected and avowedly left-wing Israeli newspaper. Baskin is a high profile American-Israeli activist who has worked with Palestinians to develop ceasefire plans during past conflicts and a blueprint for a two-state solution (he now works on renewable energy initiatives with the Palestinian Authority). So both sides would have reasons to interact with each of the two accounts. But such accounts are pretty rare, which is part of the polarization.

More proof of polarization: discussion of the Shati refugee camp

To confirm that this apparent polarization wasn't a one-off result of just looking at UNRWA/UNWRA tweets, I asked Lotan if he might consider re-running the analysis with another event. He looked at a strike on the Shati refugee camp on July 28th. Israeli officials, supported by an Italian journalist at Radio Poplare, claimed the Gaza camp was struck by a misfired Hamas rocket; Hamas blamed an Israeli airstrike. Here's what the cluster chart looks like for that incident: 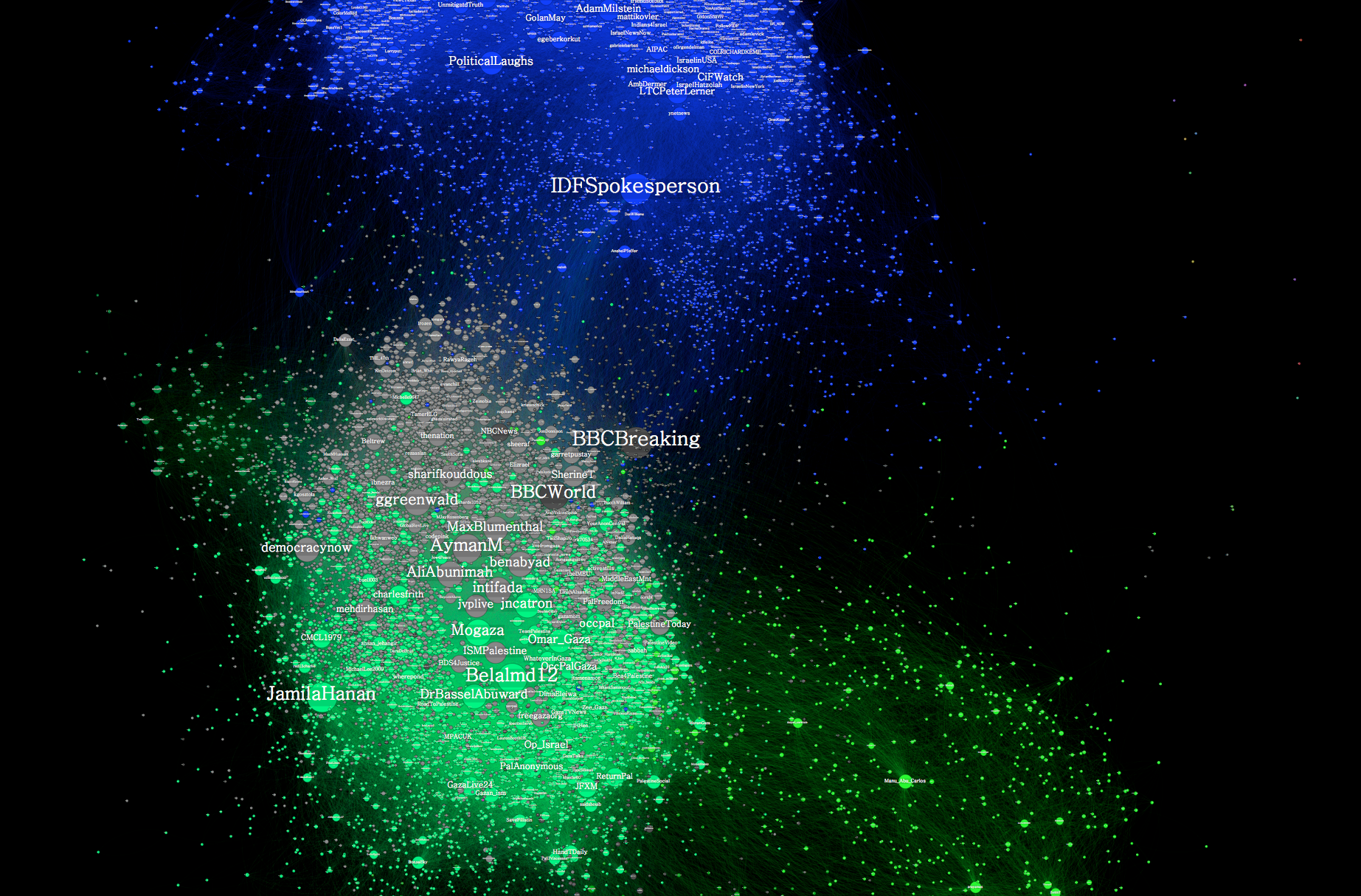 Lotan's findings tell us something interesting about how social media affects already-problematic hyper-polarized issues like Israel-Palestine. It unfortunately would seem to contradict a popular theory, among people optimistic about technology, that social media facilitates open flow of information and free communication. People, in theory, use it to connect with people who have different views and learn from them.

That nice theory appears to be totally wrong, at least as it relates to Israel-Palestine. People seem to use social media to seek out affirmation of what they already believe, to find evidence that their partisan narrative is correct.

This interpretation of Lotan's work fits with what we know about partisan psychology. One famous study showed two groups of people identical write-ups of fake studies about the death penalty. People who believed the death penalty deterred crime uncritically accepted the research coming to that conclusion, but tried their best to poke holes in the study showing no deterrent effect. The reverse was true for those who didn't believe in death penalty deterrence. The point is that people weren't neutrally evaluating arguments. They were simply reasoning to the conclusion they want. 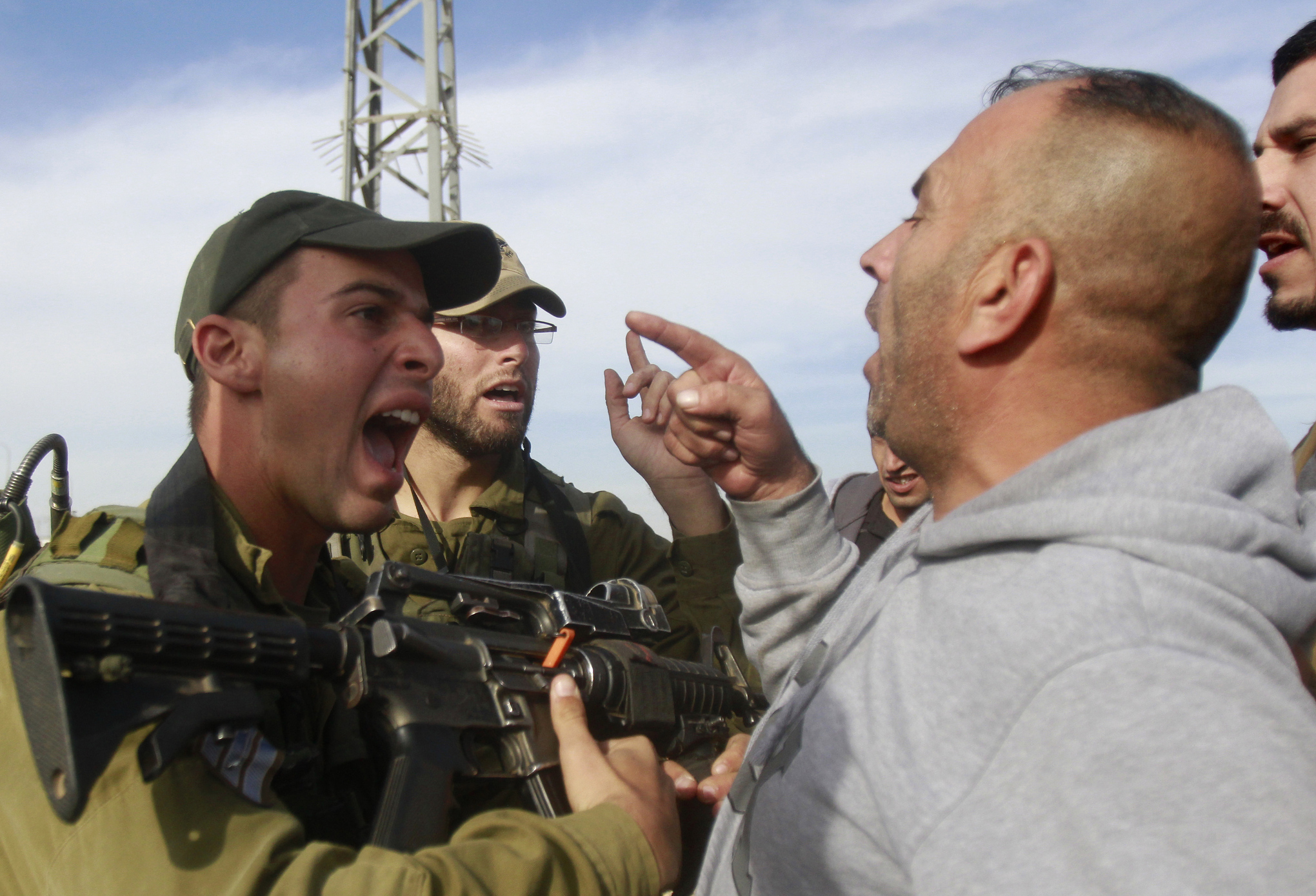 The more you care about an issue, the worse this problem appears to be. A 2006 paper by Christopher Achen and Larry Bartels studied what happened when you asked Democrats and Republicans whether the deficit had gone down under Bill Clinton (it had, dramatically). Achen and Bartels found that better informed Republicans were more likely to get the question wrong than less-informed ones. A prior Bartels paper found that better-informed Democrats were likely to say inflation didn't decline when Reagan held office (it did). It looks like the more you know and care about a political topic, the more likely you are to try to ignore evidence that makes the other side look good.

Israel-Palestine is about as partisan an issue as there could be. There's a metric ton of historical pain on both sides, and genuinely deep fear about the survival of both the Israeli and Palestinian people. The extraordinary significance of the conflict ossifies the camps: when the issue is so important and emotional, no one wants to give ground. Anything one says that helps one side's narrative is greeted warmly by its partisans, and denounced by its enemies. This creates a great deal of pressure to make one side your allies, and stick with them.

Social media, as Lotan's research shows, isn't challenging this basic tribalism. If anything, it's making it worse.