How dangerous is it to use headphones on a bike?

Share All sharing options for: How dangerous is it to use headphones on a bike?

It's not uncommon to spot cyclists in a city riding around with earbuds crammed firmly into each ear.

To many people, this seems insane: city riding is dangerous to begin with, and eliminating one of your senses can only make it more perilous.

But others have countered that most headphones don't block out all sound, that it's not really so different from drivers listening to music in their cars. And, they'll add, hearing really isn't that crucial for biking safely.

The biggest problem with resolving this argument: there's no data on bikers' accident rates that compared headphone users with the rest. For what it's worth, the majority of states do not outlaw riding with headphones (although many recommend against it). Five states allow one headphone, but not both, while three others ban them entirely. 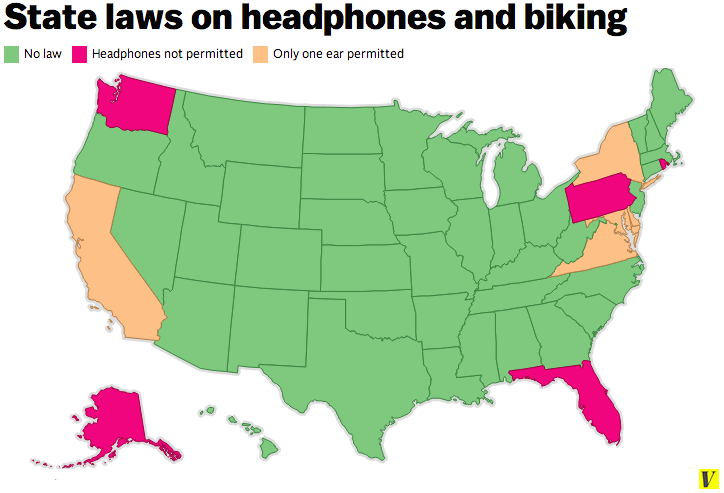 Note: there's some dispute over whether Florida's headphone ban applies solely to motor vehicles, or bicycles too.

So is riding around wearing headphones actually dangerous? Here's our look at the research and common sense surrounding this issue.

The argument for headphones 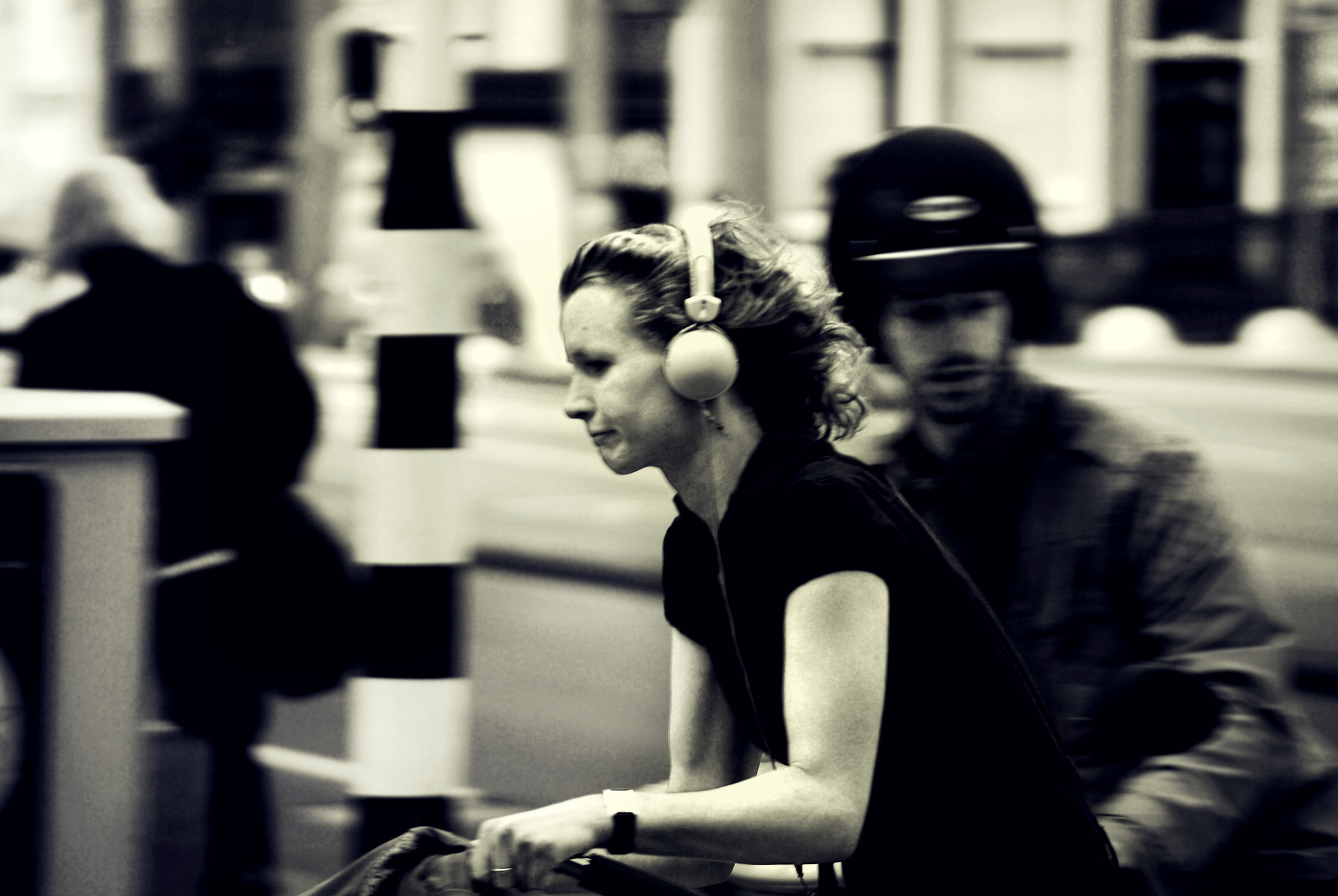 Given that this is a safety issue that impacts a lot of people in many different countries, it's a bit surprising that there really hasn't been any rigorous scientific research into the effect of listening to headphones on biking. But one informal study, conducted by Australia's bike magazine RideOn, seems to support the idea that it might not be all that dangerous.

For the study, a pair of reporters used both a decibel meter and their own ears to do some testing. They found that a person wearing earbuds and listening to music from an iPod turned almost all the way up (playing at 87 decibels) could hear someone else calling out "passing" and a bike bell ringing from about 32 feet away. They also found that someone sitting inside a car and listening to slightly softer music (69 dB) from the car stereo couldn't hear either of these sounds.

Their conclusions: normal earbuds don't mask sound nearly as fully as a car's closed doors, and allow a rider to hear warning sounds from other riders. (Note that they also tested in-ear earbuds, which sit inside the ear canal, and found they blocked outside sounds much more fully.)

Others say that whether or not headphones block noise, a cyclist's sense of hearing simply isn't that important. Hearing a car approach from behind gives a biker just a few seconds of warning, and in an urban environment, distinguishing the sound of an approaching vehicle from ambient noise is extremely difficult. Safely riding a bike, they say, like driving a car, does not depend heavily on listening — which is why there are no laws banning people with hearing problems from riding.

Some headphone advocates go so far as to say that listening to music helps bikers relax and become more attuned to their surroundings — a bit like the many surgeons who listen to music while operating.

The argument against headphones 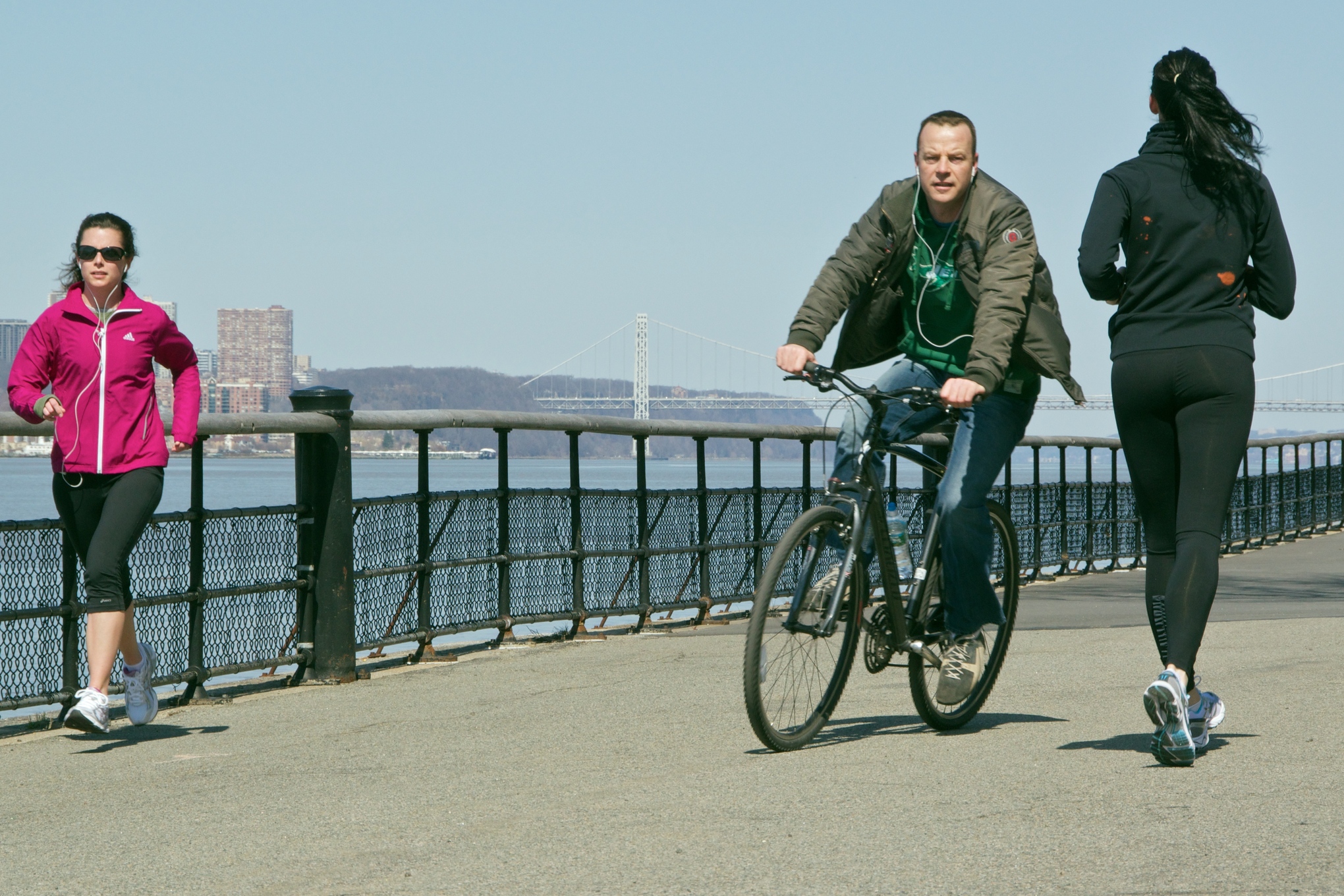 The case against headphones is more straightforward. Riding a bike in traffic is an inherently risky behavior, with hundreds of cyclists getting killed every year in the US. Taking away your second most important sense adds an unnecessary risk to biking, and can only make it more dangerous.

That's because listening, the anti-headphone crowd says, can alert a cyclist to all sorts of subtle aural cues in the chaotic city riding environment: say, a car approaching from behind, another bike about to pull into a darkened intersection, or a kid or dog about to run into the street. Especially for the huge percentage of bikers who don't come to a complete stop at intersections, listening carefully is a must.

Finally: the benefits of wearing headphones (that is, music) apply solely to the bike rider, but the potential costs are passed on to all the pedestrians and other riders he or she might potentially hit. So riding with headphones on can be construed as not only an unnecessary risk, but a selfish unnecessary risk. 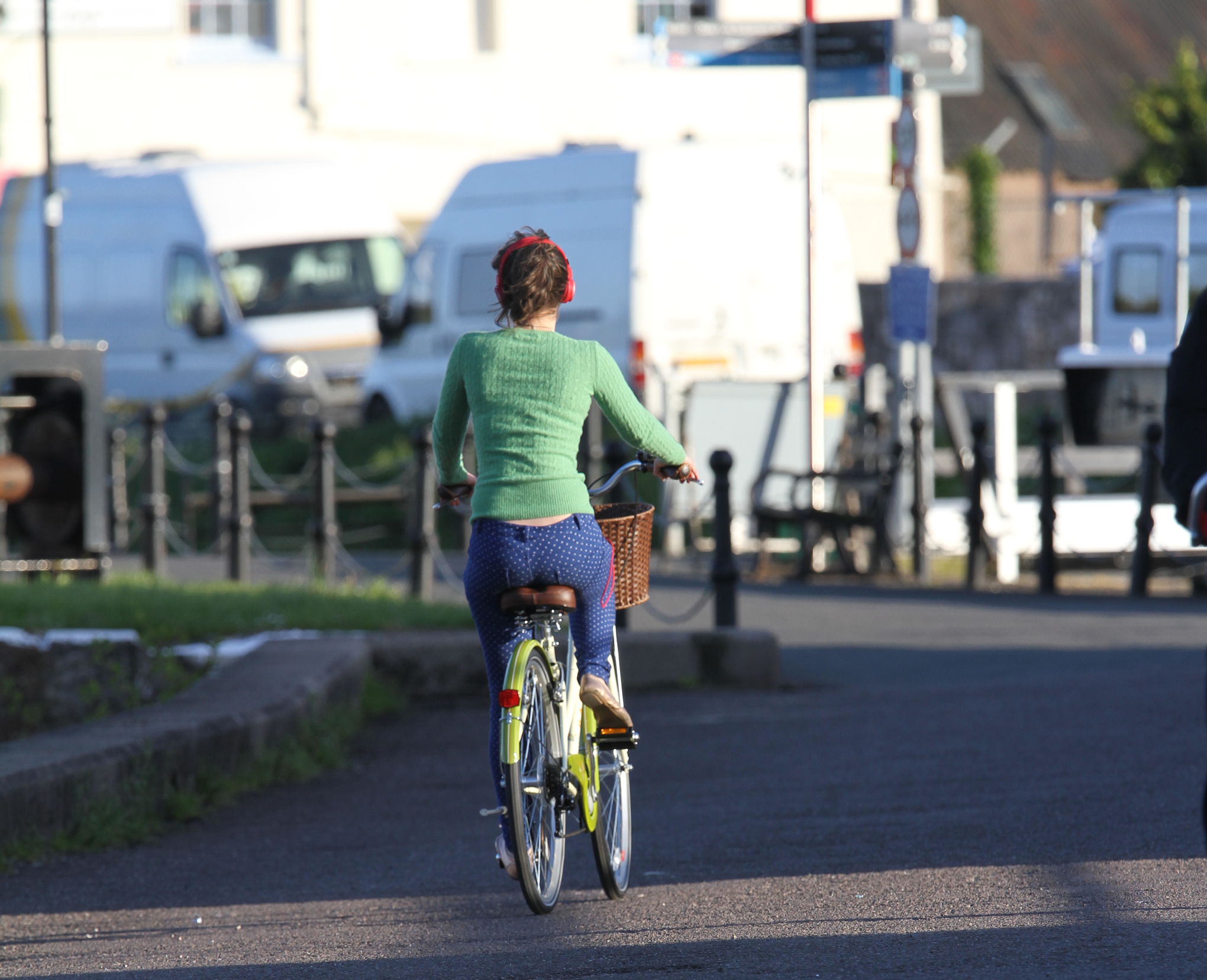 As someone who's previously argued that bikers should be able to roll through stop signs and expressed skepticism about the importance of helmets, I picked up this issue expecting to come down on the side of headphones being relatively safe.

But given the lack of any real data, I decided to test things for myself. When I did so — riding around Washington, DC with listening to music for the first time ever — I was struck by how disconnected I suddenly felt from my surroundings, far more than I'd expected.

Wearing a pair of earbuds revealed ways I use my ears when riding that I had no idea of. When making a right after waiting at a red light, I realized I had to look back to see if any other bikers had pulled up beside me, to ensure I wouldn't be cutting them off right when they started pedaling. On a quiet residential street, I was no longer capable of knowing whether or not a car was cruising behind me — I had to periodically turn to look. And the whole time, I felt a strange paranoia because I might not be able to hear if anyone spoke or beeped at me.

All these things could probably be compensated for, mainly by doing some extra glancing and turning. This was my first time wearing headphones, and I'd likely get used to doing it over time. But the experience indicated that, at least for me, listening is a tool I unconsciously use to be more fully aware of my surroundings as I bike.

Ultimately, my personal experiment doesn't provide any firmer evidence than is already out there about bikes and headphones. There just isn't any data, one way or the other. But if we weigh all possibilities, it's easy to see that the cost of being overcautious (not getting to enjoy music while riding) is much smaller than the penalty of being not cautious enough (getting injured or killed on a bike). In this case, erring on the side of caution makes sense.

One exception: wearing a single headphone. As others have suggested, I also tried riding with just one in and found that, for the most part, I could hear both my music and my surroundings. We're lucky to have two ears — and perhaps with this issue, it makes sense to split the difference.