Share All sharing options for: Nearly 4% of the world's oil supply is offline due to conflict

The world's oil prices have stayed high since 2010 — bouncing around $100 per barrel— for two basic reasons. Oil demand keeps rising, and production is struggling to keep up.

But why is production struggling to keep up? One big factor has been geopolitical conflict. Wars, unrest, and sabotage have increasingly plagued oil producers like Iraq, Libya, and Syria since 2011. The US and EU sanctions on Iran's oil industry have also removed a lot of oil from global markets.

All told, some 3.3 million barrels of oil per day — equivalent to nearly 4 percent of global supply — are currently offline due to "unplanned outages": 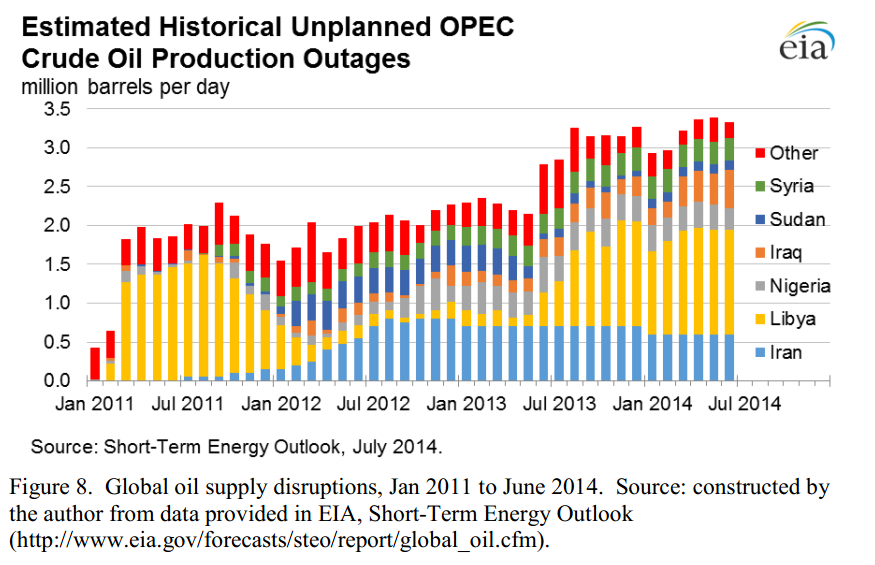 The chart above comes from a new paper (pdf) by James Hamilton, an economist who studies oil at the University of California, San Diego. He argues that the oil markets have changed dramatically in recent years — and $100 per barrel oil is likely here to stay:

The big stories in the oil market, he says, are:

'My conclusion is that hundred-dollar oil is here to stay'

1) World oil demand is now being driven by emerging economies. Wealthy countries — including Europe and the United States — have actually been cutting back on their oil use, thanks to improved fuel efficiency and reduced driving. But fast-growing countries like China and India are more than taking up the slack.

2) Most of the new oil since 2005 is lower-quality hydrocarbons. A smaller fraction of the "oil" being produced today is actually crude oil — which is arguably the most useful of all liquid fuels.

3) The fact that oil production has stagnated means higher prices. This one's pretty obvious. If producers can't keep up with soaring demand from countries like China, prices will rise.

4) Geopolitical disturbances are holding back production. See the chart above. This includes conflict and war in Syria, Iraq, and Libya. It also includes the effect of US and EU sanctions on Iran's oil industry.

5) Many oil producers are bumping up against geological limitations. There's some evidence that Saudi Arabia is having trouble increasing oil production, Hamilton notes. And private companies are investing more and more money but getting less and less oil. A lot of the easy-to-drill oil is already online — what's left is the hard stuff.

One major exception here is the United States, which is producing more oil these days thanks to improved fracking and horizontal drilling techniques. (That US production has helped mitigate the effects of all those unplanned outages.) but there are lots of obstacles hindering the spread of those technologies elsewhere.

Add it all up, and you get pricey oil on the global markets. And Hamilton, for his part, is skeptical that these factors will go away anytime soon. Yes, peace might break out in Libya or Iraq — or a financial crisis might break out in China — and that would cause a dip in prices. But the dip would only be temporary, buying the world a few years' of extra supply. "My conclusion," he writes, "is that hundred-dollar oil is here to stay."